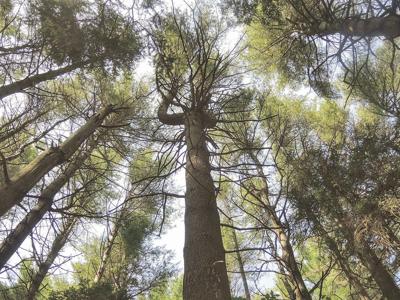 Communities with large tracts of state land are being stiffed financially. That’s what a top Massachusetts official thinks — and she’s coming out Friday to say it again.

“The formula is not fair to the small, rural towns. It’s totally unfair, what’s happening."

Edward Munch of Peru, a former Select Board member

In December, Auditor Suzanne Bump issued a 70-page analysis of how Massachusetts goes about compensating communities in which the state owns land exempt from property taxes.

Bump’s critique was clear: The system is increasingly unfair, especially to smaller towns in Western Massachusetts, and needs to be reformed to prevent an already weak financial support from faltering.

On Friday, Bump will join with local lawmakers in Deerfield and Hawley in a bid to build awareness of the problem and to push for change.

Instead of paying property taxes on tens of thousands of acres of land in Berkshire County, the state coughs up a “payment in lieu of taxes,” known as a PILOT. Due to a recent change in how those payments are allocated, towns seeing below-average yearly increases in property values have been losing out.

“The formula is not fair to the small, rural towns,” said Edward Munch of Peru, a former Select Board member. “It’s totally unfair, what’s happening. This needs to change, otherwise in Berkshire County we’re going to have major problems.”

Bump has teamed up with state Sen. Adam Hinds, D-Pittsfield, and state Rep. Natalie Blais, D-Sunderland, to file legislation that would implement Bump’s recommendations for adjusting the PILOT formula.

“It feels like this is the first step, and even the auditor said that we can continue to study to see if there are better ways to handle this,” Hinds said. “We’re definitely open to different approaches, but it feels like there’s the urgency of getting funding to our towns.”

In all, 297 of the state’s 351 communities get PILOT payments. The program has been in place since 1910. Critics believe it has been broken for a while.

In the fiscal year that ended last month, the state paid out $30 million based on land holdings worth $3.15 billion. In Berkshire County, state land is valued at $301,116,600 in the current fiscal year, up $17.1 million from the year before.

Towns have been losing ground, compared to the value of taxable properties. After the Great Recession, PILOT payments slumped for years, only last year catching up to levels of a decade ago. While those payments held steady, property tax collections statewide rose 57 percent in the same period, according to Bump's analysis.

While reimbursements under the proposed revision of the formula would still depend on property values, the bill would add a “hold harmless” provision so that municipalities cannot lose funding from one year to the next. That change, lawmakers believe, would benefit communities where property values are declining or are rising at a relatively low rate.

The bill also would change the formula to use the three-year aggregate tax rate, which the Department of Revenue had previously used, a ratio of the total property tax assessed in the state to the total property valuation. The fiscal year 2020 PILOT reimbursement rate for state-owned land was $9.54 per $1,000 of value, well below the aggregate tax rate of $14.51 per $1,000.

The push to change the formula has been complemented by an effort to bolster funding for the program in the state budget. Lawmakers increased the allocation from $30 million for fiscal year 2021 to $35 million in the fiscal year 2022 budget, and they plan to add $5 million a year until it reaches the roughly $45 million that Bump’s report said is sufficient under the aggregate tax rate.

Bump has worked with members of the House Rural Caucus to advocate for greater funding, a member of her office said. That staff member said that the group planned to hold Friday’s events in advance of the hearing on the bill filed by Hinds and Blais.

Blais said the most concerning aspect of current PILOT reimbursement levels was that “dissatisfaction with the SOL PILOT program has led local officials to oppose further acquisition of land by the state,” she said, quoting Bump’s report.

“I think that our goal should be to protect land here in Western Massachusetts, but not at the expense of our communities,” Blais said.

Other Western Massachusetts lawmakers also see a pressing need to revamp the system.

“It’s a major issue,” said state Rep. John Barrett III, D-North Adams. “The reimbursement program at best is weak. Now to be hit with something that further dilutes it is wrong. There’s no ifs, ands or buts about it.”

Barrett said he backs findings in the auditor’s report. “Every community is impacted. They keep purchasing land all the time,” he said of the state.

Right now, these are the factors that determine how much money communities get from the state under PILOT programs:

• Annual amount of money appropriated by the Legislature for the program

“If they do not want to pay their fair share of taxes, then we should stop buying land,” Pignatelli said. “I think the state has to step up. This has been going on for a long time. The state’s got to pay its fair share. We have to stop handcuffing communities.”

In Mount Washington, the state owns more than half of the acreage in the town, but the state-owned land valuation comes out to only one-fifth of the total land value, in part because the state-owned land is “unimproved” wilderness, Select Board member Jim Lovejoy said. PILOT reimbursements make up around one-third of the town’s annual budget.

“It’s hard for small communities like ours to survive with the costs of everything going up,” Lovejoy said after Bump’s report was released in December. “If they cut [reimbursements] by $60,000, that’s somebody’s salary. That’s our ability to manage the roads, manage our infrastructure.”

In her report, Bump said the formula used punishes many smaller towns in Western Massachusetts.

“The formula provides larger reimbursements to municipalities with high and fast-growing property values at the expense of other communities,” the report said. On top of that, the money can’t be relied upon by towns.

“Millions of dollars in reimbursements for (state-owned land) are distributed to communities each year, but payments are not consistent, due to fluctuating state budget appropriations and changes in property values. Concerns come particularly from communities in central and western Massachusetts,” it said.

“Municipalities that cannot catch up to communities with increasing land values will experience lower reimbursements over time,” the report said, “and the effects will be more profound if the program’s appropriation is reduced or remains level.”

Who's exempt, and who's not?

• Targeted population groups such as veterans, widows and surviving children, the elderly and the blind

• Land and buildings owned by the state or federal government, including authorities (e.g., the Massachusetts Water Resources Authority)

The following are properties of state agencies that while exempt from taxes are not part of a PILOT program: Major government properties owned by the Division of Capital Asset Management and Maintenance and associated agencies; barracks for the Massachusetts State Police; National Guard armories under the Commonwealth’s Military Division; state firefighting academies; buildings and land for the Massachusetts court system; land and property attributed to county sheriffs; and other properties from state agencies that were tax-exempt under previous owners.

SOURCE: Office of the state auditor

As a result, it’s a matter of rich town, poor town.

“Urban and suburban areas in the eastern part of the state, especially affluent ones, are the largest recipients of the program’s reimbursements,” Bump’s report said. “Rural, less affluent areas in central and western Massachusetts receive declining PILOT reimbursements.”

In fiscal 2020, the state added over 363 acres of land to its portfolio in Williamstown, but that town government lost over $13,863, or 8 percent, of its PILOT reimbursements.

In the town of Peru, the state added 141 acres to its already large holdings of about 7,700 acres; that’s 40 percent of the land in Peru, according to Bump’s report. Nonetheless, the town lost over $19,867, or 29.2 percent, of its PILOT reimbursements going into that same fiscal year.

On Friday, Bump will join with Hinds, Blais and state Rep. Paul Mark, D-Peru, to discuss the issue in a 10:30 a.m. stop atop the Mount Sugarloaf State Reservation, at 300 Sugarloaf St. in Deerfield.

At 1:15 p.m., the group will move to a site near the Dubuque State Forest in Hawley, home to a 8,079-acre state landholding. The location will be 466 W. Hawley Road in Plainfield, at picnic tables near the Hallockville Pond.

Auditor: Poor rural towns in Massachusetts aren’t getting the help they need to keep up with wealthy ones