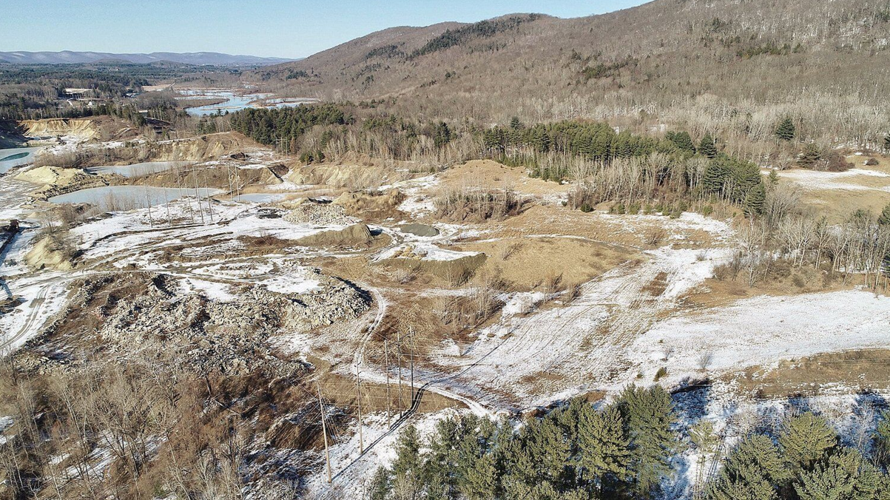 Under terms of the revised Housatonic River cleanup agreement, the General Electric Co. will be permitted to dump contaminated material in a 20-acre landfill at this quarry in Lee. Woods Pond, which is just north of the site, is visible in the upper-left portion of the photo. 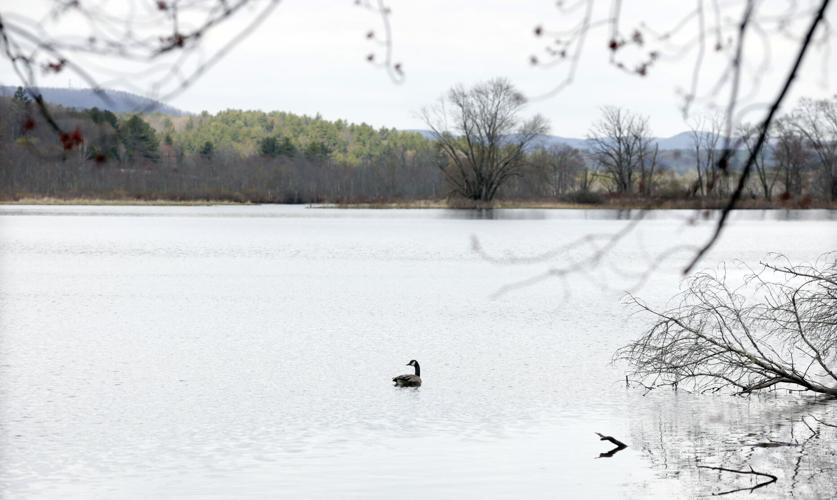 A stretch of the Housatonic River near Woods Pond in Lee. The planned Upland Disposal Facility that would receive sediments with lower levels of PCB contamination would be located on a former quarry site just south of the pond.

Three years ago this month, the Environmental Protection Agency was preparing to reveal that, in a switch, it would allow PCBs dredged from the Housatonic River to be buried in the Berkshires.

The General Electric Co. continues to shape plans for that controversial disposal site in Lee. But a challenge by two environmental groups still stands in the way.

In recent filings with the U.S. Court of Appeals, lawyers for GE and for five Berkshire County towns call on the court to reject claims the EPA erred in revising its cleanup plan to allow local disposal of polychlorinated biphenyls, a probable carcinogen.

The arguments are dense and technical. But if successful in the year ahead, they will move the planned Upland Disposal Facility closer to being built. The appeal that seeks to stop the local burial was brought by the Housatonic River Initiative, led by Tim Gray of Lee, and the Housatonic Environmental Action League.

It’s been more than two decades since GE reached an agreement with the U.S. government to take responsibility for polluting the river and its floodplain.

In an initial cleanup around its transformer plant in Pittsfield, and in a section of river to the immediate south, the company spent hundreds of millions of dollars. That work turned next to what’s known as the Rest of River cleanup — covering polluted areas to the south, into Connecticut. The EPA first said GE would have to ship PCBs out of Massachusetts. Then, in early 2020, came the “settlement agreement.” It allows more than a million cubic yards of sediments tainted with lower levels of PCBs to be buried in Lee.

The two environmental groups fought back. They first challenged the EPA’s plan before the Environmental Appeals Board, the nation’s highest environmental court. After losing there last year, their pro bono attorneys moved to the appeals court. They now have until Feb. 3 to submit responses to the latest filings from GE and the five Berkshires towns.

Here are key arguments advanced by attorneys who want the appeals court to uphold the EPA permit. 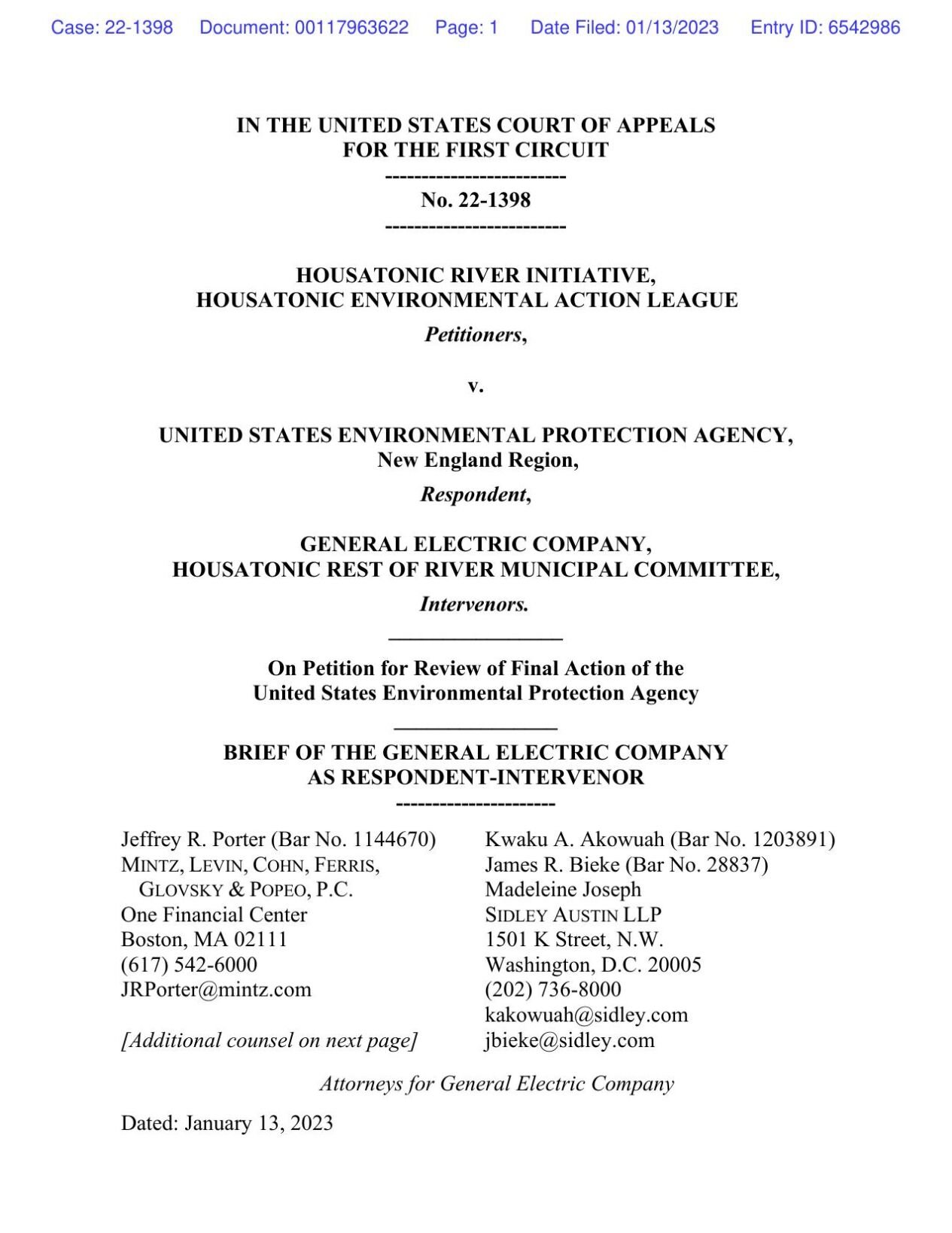 — They claim the EPA got it right, when it issued a revised permit in December 2020. In their 65-page filing, lawyers for GE rebut the claim, in the appeal, that the agency engaged in arbitrary or “capricious” decision-making. That’s among the claims made by the environmental groups, based in part on the fact that in an October 2016 version of the cleanup permit — later challenged by GE — the EPA called for all PCBs to be sent out of state for disposal.

“To prevail on that challenge, they would need to show that the [EPA] reached an irrational decision based on the evidence or failed to explain its decision in light of that evidence,” the GE attorneys write in a Jan. 13 filing. “Petitioners have not come close to carrying that heavy burden; indeed, they have ignored significant aspects of the record ….”

— The GE lawyers acknowledge that the EPA changed its stance, agreeing to a “hybrid” system that allows for local burial of sediments and soils containing lower amounts of PCBs. That is allowable, the lawyers claim, “when the agency provides a ‘reasoned explanation’ for its revised position ….” They cite a U.S. Supreme Court case: FCC v. Fox Televisions Stations Inc.

The lawyers say federal law allows courts to accept that on highly technical issues, agencies like the EPA are in the best position to decide these matters. “This Court has pointed out that the deference to the agency is especially great where the issue involves the ‘scientific and technical nature of the EPA’s decision-making,’” the GE lawyers write.

“It is clearly not arbitrary for an agency to adopt a new approach after its initial decision has been reviewed and found wanting and after completing a more consistent and more probing analysis of the issue.”

By “found wanting,” the lawyers refer to a decision by the Environmental Appeals Board in January 2018 to send the case back to the EPA for further study, specifically on its call for all the PCB-laden material to be sent from Massachusetts.

Representatives of the EPA told The Eagle in early 2018 that they were working to respond to the EAB justices’ requests to further explain that decision — but intended at the time to continue to require out-of-state disposal.

— In response to one claim in the appeal, the GE lawyers say the environmental groups were not unfairly kept out of a mediation process led by Washington, D.C., attorney John Bickerman in 2018 and 2019.

A representative for HRI dropped out after two meetings, the GE lawyers say, while HEAL declined from the outset to sign a nondisclosure agreement. “There is also no basis to Petitioners’ contention that they were ‘excluded’ from the settlement discussions,” according to GE’s filing. “Petitioners made their own decision not to participate.” 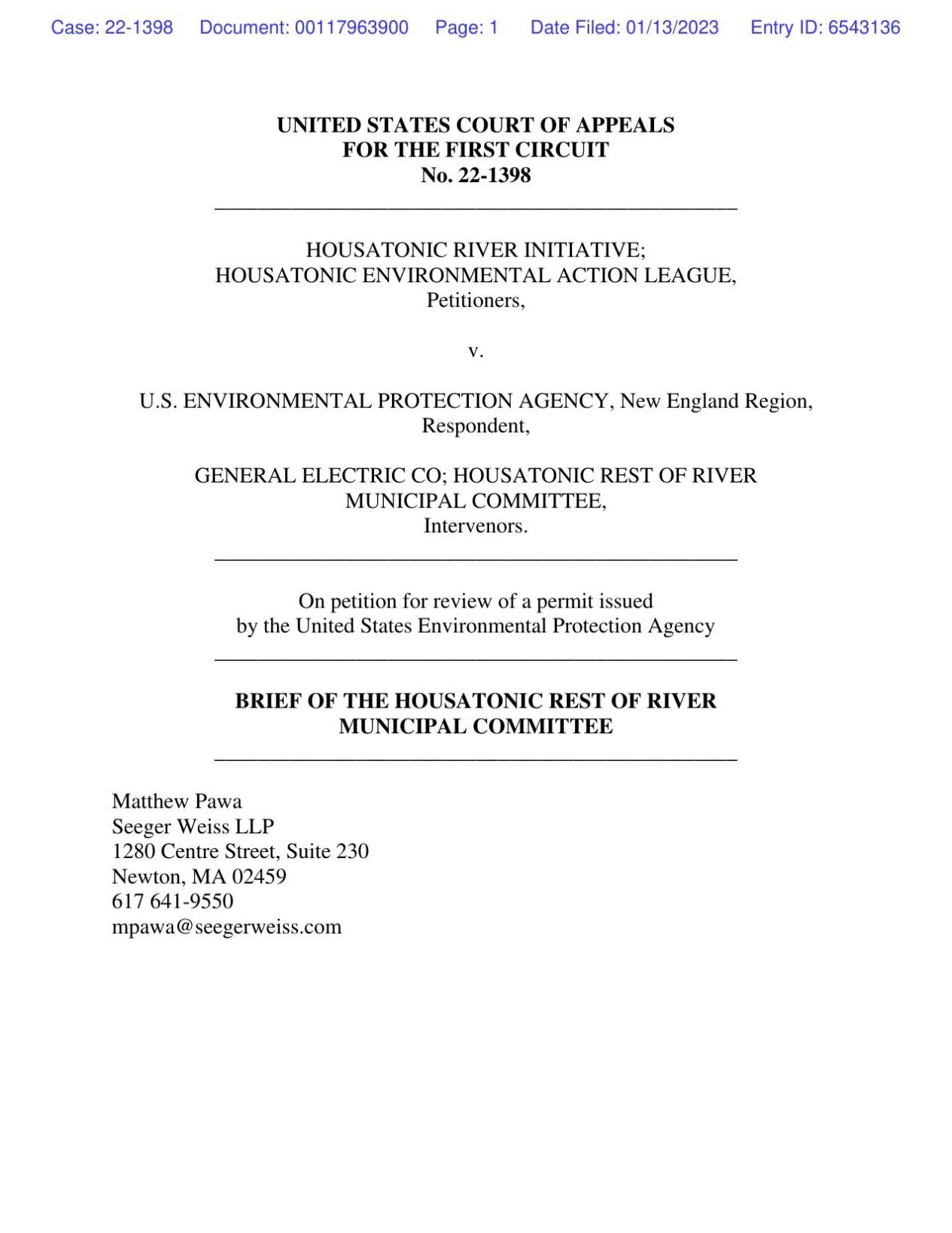 The filing on behalf of the Housatonic Rest of River Municipal Committee, by attorney Matthew Pawa, makes many of the same claims as the GE team. Pawa, of Seeger Weiss LLP of Newton Centre, represents the committee on behalf of Great Barrington, Lee, Lenox, Sheffield and Stockbridge.

Though elected officials in Lee backed the breakthrough agreement in February 2020, their successors now oppose the PCBs landfill to be created in a former sand and gravel quarry south of Woods Pond. Last fall, the town’s Board of Health convened a hearing to gather evidence on possible harms to public health.

Pawa notes in his 58-page filing that the settlement agreement unveiled three years ago did good things. It expanded the reach of the cleanup, required GE to begin planning right away and “dictated far-reaching and detailed conditions to GE regarding the construction and operation of the disposal facility.”

At forum, Lee residents grapple with ways to undo approval of PCB landfill

“In a comprehensive decision, the EAB rejected challenges to EPA’s decision. This Court should do the same,” Pawa writes, referring to the appeals court.

Like the GE team, Pawa defends the EPA’s decision to call in a mediator.

“The mediation itself had very real environmental benefits in the form of adding speed and extra PCB removal, and removing litigation-related uncertainty,” he writes. “EPA had ample discretion to mediate and to sign the Settlement Agreement. It would be unwise to devise a new rule of law discouraging such settlement talks.”

The Environmental Protection Agency’s new approach to removing toxins from the Housatonic River, first outlined in broad terms two years ago, now us official. Opponents have not exhausted their legal options.

Two environmental groups came up short Tuesday in their legal efforts to block disposal of toxic sediments in a landfill near the Housatonic River in Lee.

Members of Lee‘s top board did not misstep legally, a judge says, when they decided to accept a PCB landfill as part of a dramatic reset last year on plans to remove toxins from the Housatonic River.