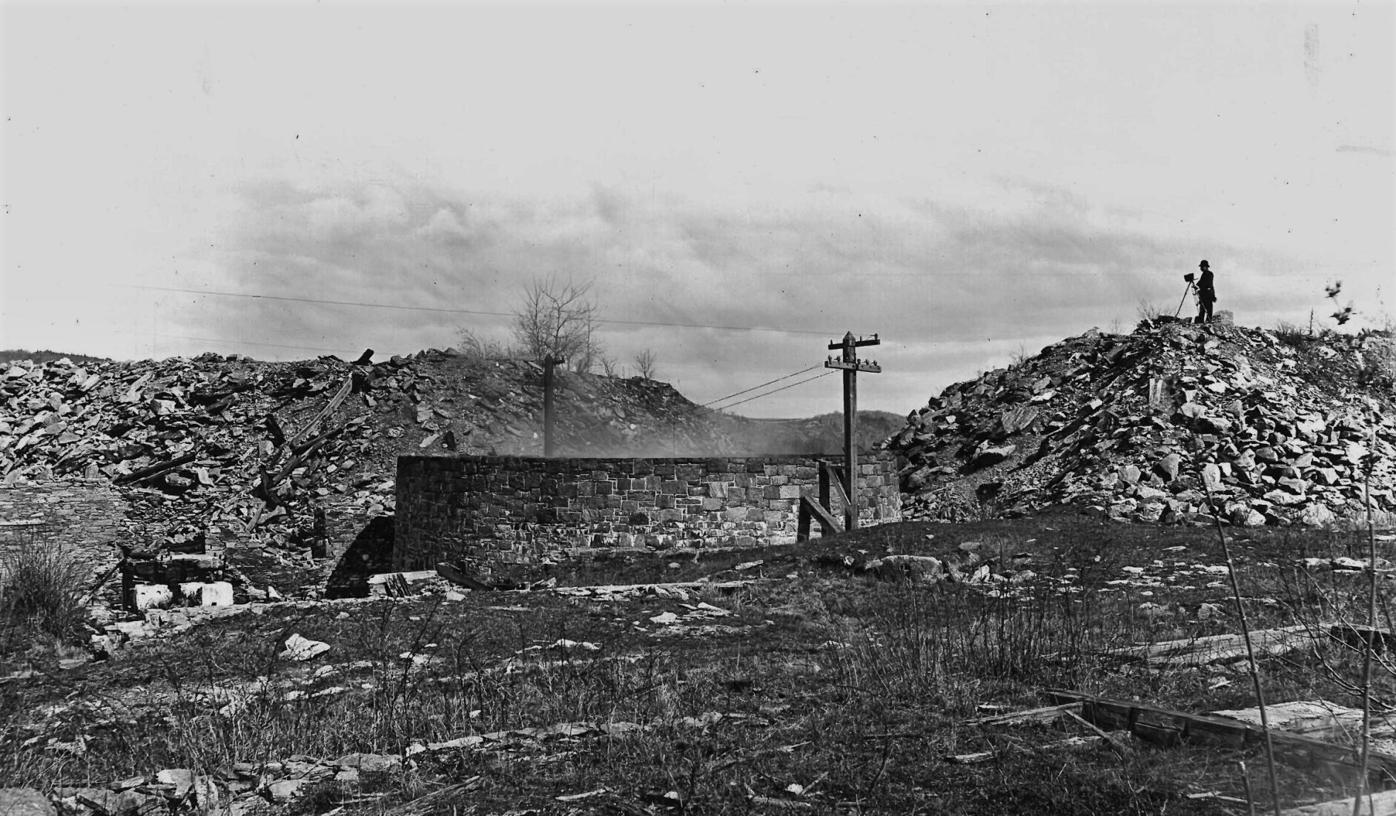 On Oct. 17, 1867, an accident at the Central Shaft of the Hoosac Tunnel, pictured, took the lives of 13 workers. Although about 200 workers died building the tunnel, the accident was the greatest in number and most tragic. During the year it took to recover and bury their bodies, it is said, their ghosts roamed the woods around the trail to the shaft. 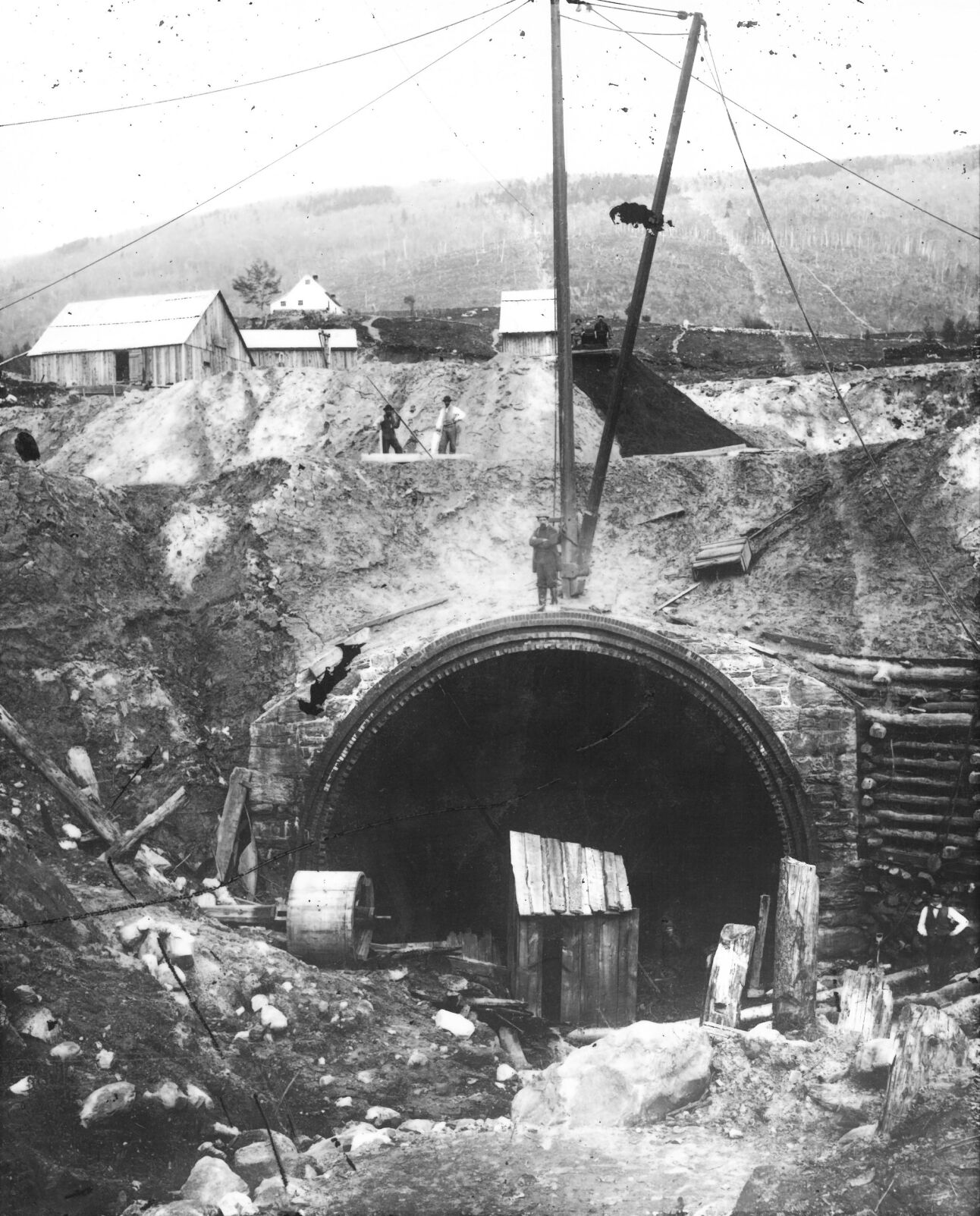 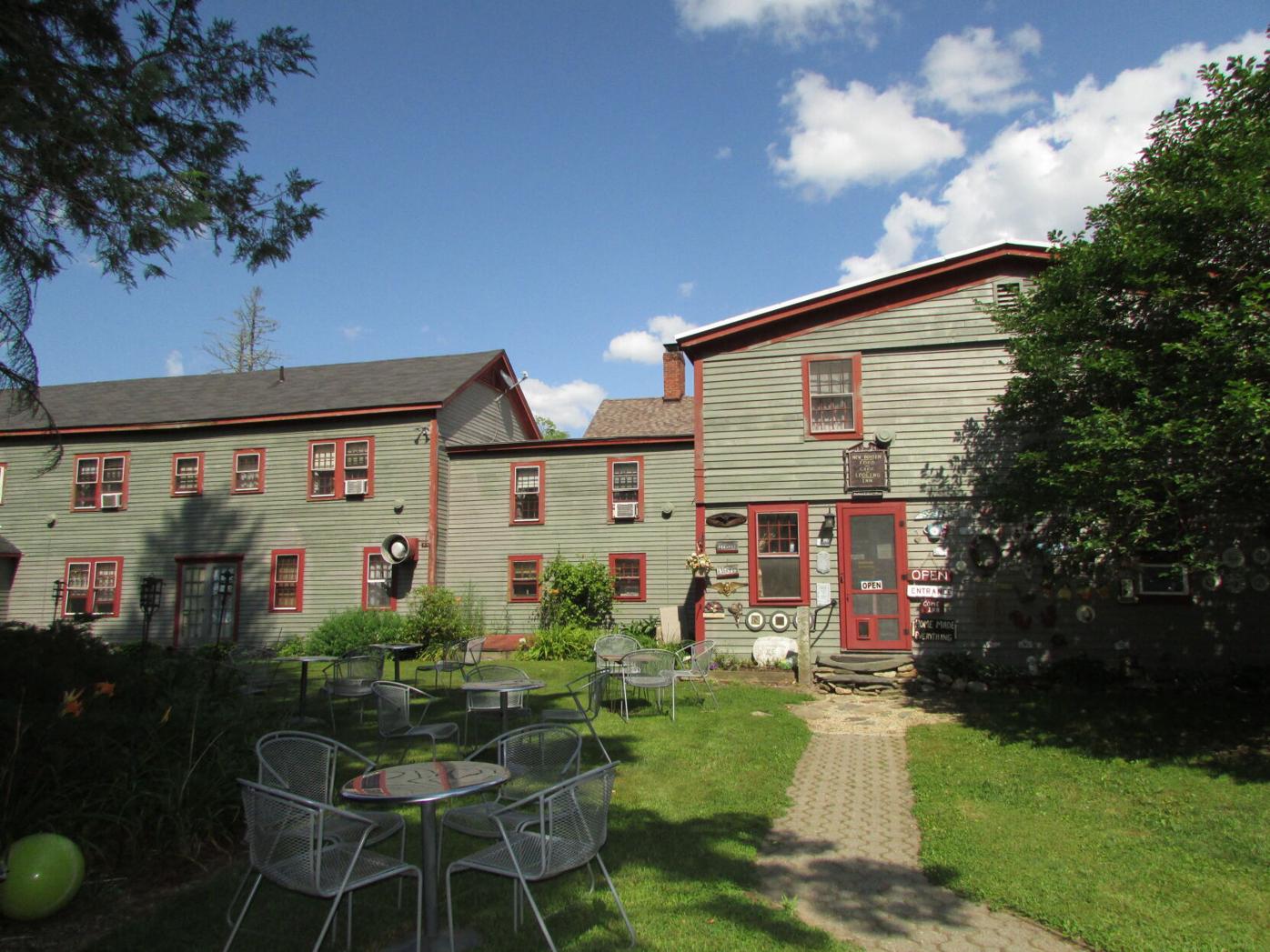 The New Boston Inn in Sandisfield, built in 1737, is thought to be home to more than one ghost. A child often is seen in a second-floor window, waving to those approaching the inn. 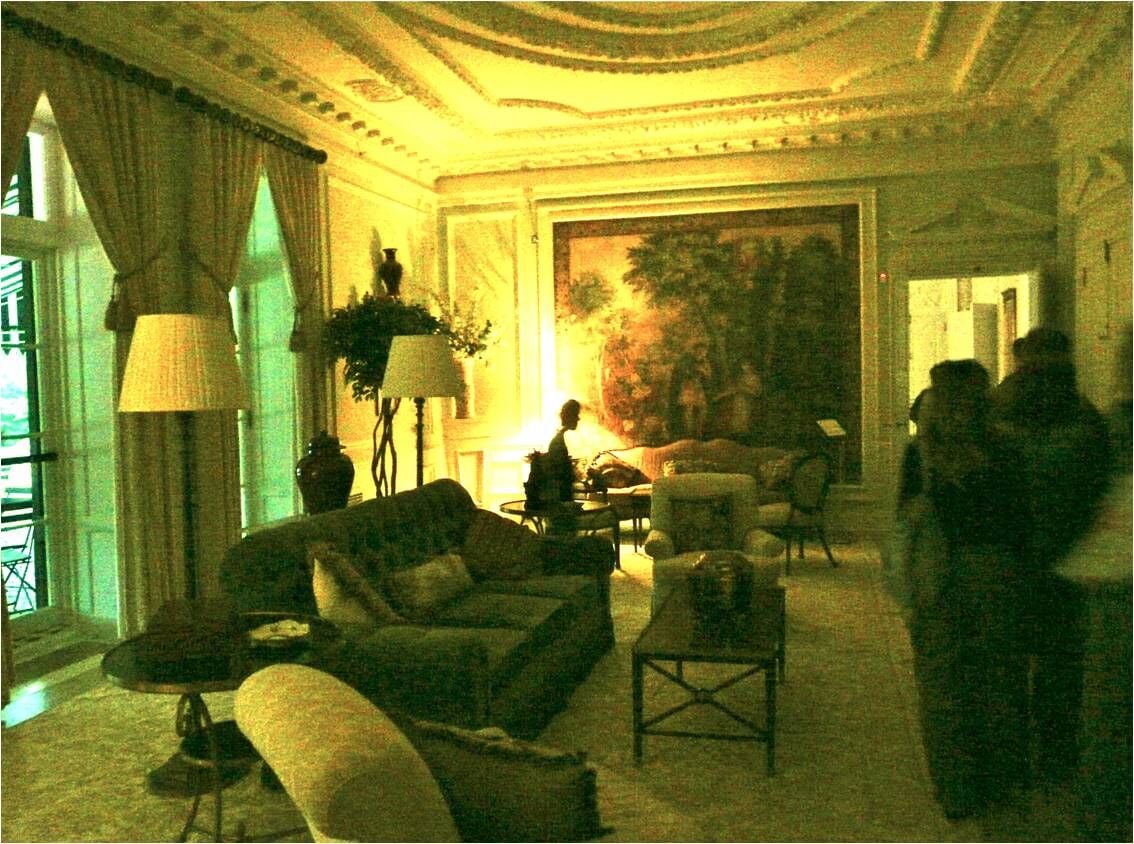 A photo sent to The Mount in Lenox, taken during a tour by Nancy L. Pastor, purportedly shows a ghostly shadow in Edith Wharton’s drawing room. 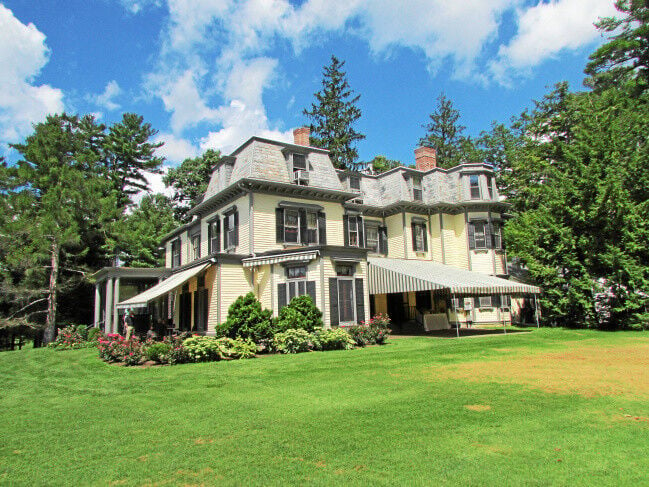 Highwood Manor, where Nathaniel Hawthorne dreamed up his “Tanglewood Tales,” supposedly is haunted. 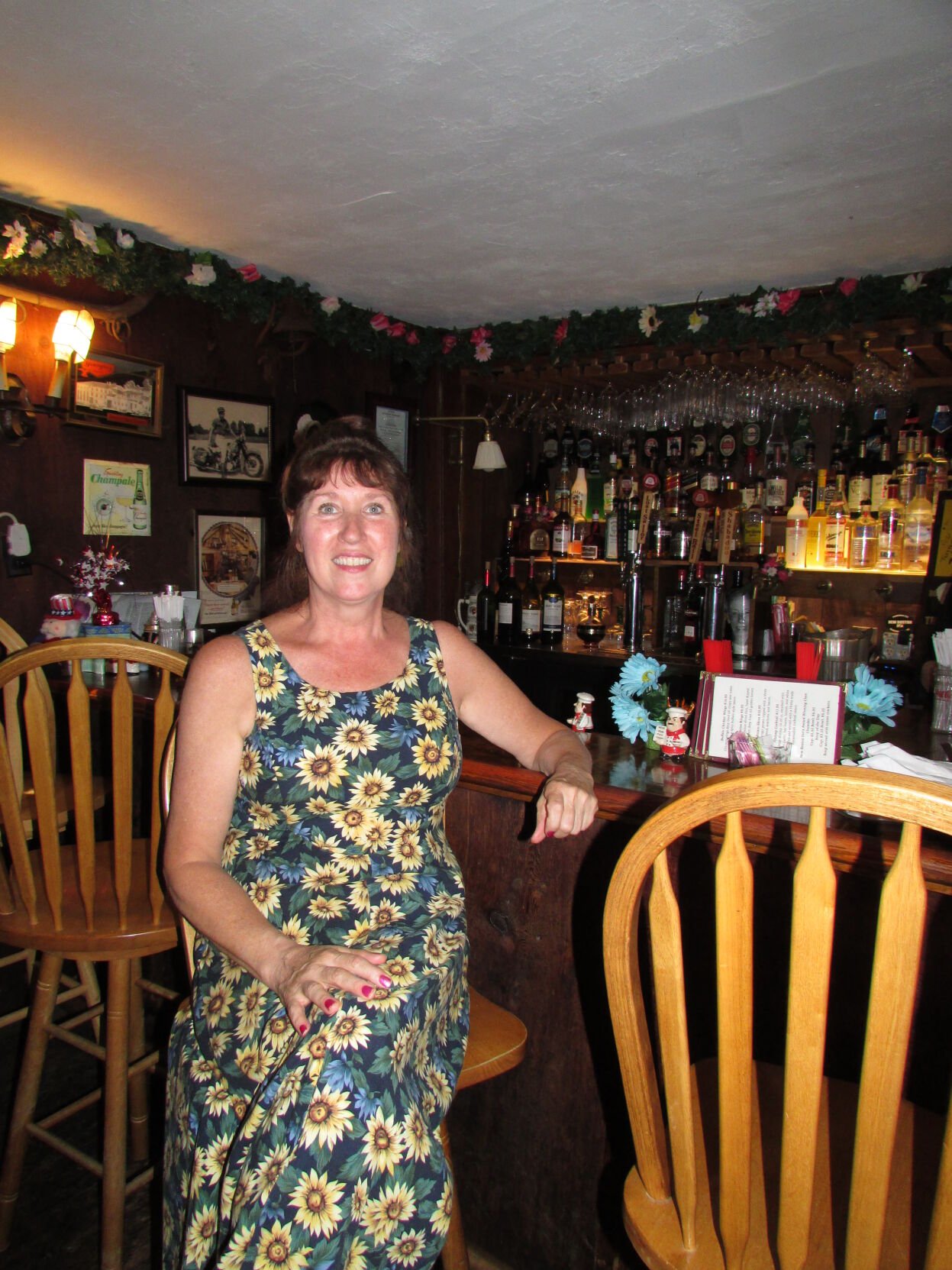 Spirits always have roamed freely in the Berkshires.

Over the centuries, a few of those bolder spirits have let their shadowy figures be seen, photographed and their stories put on paper. In 1852, Pittsfield historian J.E.A. Smith, under the pseudonym Godfrey Greylock, published "Taghconic: or, Letters and legends about our summer home," one of the earliest tomes to record Berkshire ghost stories, mostly based on Native American lore. From Smith came tales of ghostly acolytes in Wizard's Glen in Dalton and of a phantom boatman who glides over the midnight waters of Pontoosuc Lake.

Willard Douglas Coxey published a few more in 1934 in “Ghosts of Old Berkshire,” adding stories from early Colonial settlers and the Revolutionary War to the mix. He wrote of ghostly lovers that haunt Pontoosuc Lake; of a witch in Guilder Hollow; of the roaming ghost of a Hessian soldier and of the “bedevilment” that caused the disappearance and reappearance of the famous Cheshire Cheese.

But, these are not the only ghosts that roam the Berkshire Hills, just a few that have been committed to our cultural memory. On Halloween, when the veil between our world and the spirit world is at its thinnest, we offer up a few of our favorite ghostly Berkshire tales:

Listen closely enough and you still can hear the sounds of men working inside the Hoosac Tunnel; restless souls toiling away in the darkness for all eternity.

Listen a few moments more and you might hear their disembodied voices — whispers on the wind — beckoning you to join them in the darkness. Step closer to the tunnel entrance; feel the cool air rush out. Is that tingling sensation on your neck caused by a breeze? Or the touch of unseen hands?

Opened in 1875, the Hoosac Tunnel, at 4.75 miles long, was an engineering marvel and the longest tunnel in North America. But, the tunnel, which took nearly 22 years to build, came at a great expense: $21 million and nearly 200 lives.

On Oct. 17, 1867, an accident at the Central Shaft — a vertical ventilation shaft into the tunnel below — claimed the lives of 13 workers, earning it the nickname “The Bloody Pit.”

That afternoon, a lit candle ignited fumes from a nearby gasometer full of naphtha — introduced only the week before as fuel for their lamps. The resulting explosion set fire to the buildings around the shaft’s opening and sent equipment, burning timbers and rocks crashing into the shaft and onto the 13 men working about 600 feet below.

With no working pumps, water began to rush into the tunnel, while oxygen levels decreased. Two rescue attempts failed. It was assumed that the men had suffocated almost immediately. It would take a year to recover the bodies of the men, who, it was discovered, had survived for several days.

In the months after the explosion, ghostly forms were seen on the trails to the Central Shaft; moans came from the tunnel. When their bodies were buried in 1868, the ghostly figures disappeared from the woods.

But, enough souls remained trapped and roaming the tunnel — victims of falls, falling equipment, black powder explosions and, later, nitroglycerine explosions — that even the bravest of men, as reported by The Berkshire County Eagle in September 1873, said they would rather forfeit a day’s wages than enter the “long, dark and silent passage” alone.

During a lunch service in February 1958, the speed of an eastbound train literally shook the diners of the Bridge Lunch in Pittsfield. Concerned by its high rate of speed, John Quirk, owner of the diner that sat on the corner of North and Eagle streets, reported it to Boston and Maine officials.

But, railroad officials brushed off the report. They told Quirk he couldn’t have seen a train on those tracks, especially not the train he reported. First, he was told, no train had made a run on those tracks that day. But, more importantly, Quirk and his customers reported seeing a steam locomotive — which had not been used on any Pittsfield line in several years.

But, that didn’t stop reports from coming in of a phantom train traveling on the tracks between the Union Street depot and the North Street bridge, always bound for Boston at a high rate of speed. In March 1958, Bridge Lunch employees and customers again witnessed the steam-powered engine and cars fly by — this time at 6:30 a.m.

Contacted by The Eagle about 16 years later, Quirk had this to say: “We saw it regardless of what anyone else tries to tell us. It consisted of five or six coaches. I can describe that locomotive down to the last bolt. It was so clear and plain that I was even able to see the coal in the tender. And my customers saw it just as plainly as I did.”

Barbara Colorio isn’t afraid of the spirits that occupy her historic inn in Sandisfield. In fact, she thinks they make the New Boston Inn more fun.

“I clean those rooms up there, I tell you, sometimes, they lock me out of the room and I have to come down and get the key. Sometimes, I’m all done cleaning the rooms, go in there, check them to make sure everything is set and you can see [an impression] where someone laid perfectly on the bed,” Colorio told UpCountry Magazine during an interview in September 2019.

Most of the time, the ghostly activity is limited to doors that open and close on their own, footsteps heard in empty hallways, objects that move locations and the occasional apparition.

Creaky floors and doors opening on their own aren’t unusual in an inn as old as this one. The main building dates to 1737, with the last portions being added around 1760. But, Colorio says it isn’t the age of the buildings, it’s the events that took place on the property that keep some guests from ever checking out.

“There was a Revolutionary War training camp on the grounds and a medical hospital,” she said. “This was also a stagecoach stop on the Red Bird Line from Hartford to Albany. And then there was a murder in 1805.”

The inn’s most famous ghost, Harriet, spends much of her time on the second floor, where, the stories say, she was murdered on her wedding day — her lover gunned her down in the ballroom at the conclusion of her wedding vows with another man.

GHOSTLY SIGHTINGS AT THE MOUNT

“I do not believe in ghosts, but I am afraid of them,” Edith Wharton wrote in the preface of her book of ghost stories. But, if a spectral figure captured in a photograph taken on a tour of The Mount is Wharton, as it appears to be, the author is spending part of her afterlife enjoying the comforts of her beloved Lenox estate.

And Wharton is not alone. There are indications that at least one of her beloved dogs, buried in their own pet cemetery on the estate, is keeping her company.

Stories of shadow figures, ghostly apparitions and individuals being touched by unseen forces date to the 1940s, when the estate was used as a dormitory by the Fox Hollow boarding school.

Joining Wharton are a variety of household members, including her ex-husband, Teddy, and the housekeeper, Catherine, whose footsteps still can be heard walking up and down the halls. There also is Charles, her driver, a hulking shadow figure wreathed in cigar smoke, who is said to lurk in the carriage house. He is said to be joined a chambermaid, who is said to haunt the second floor.

THE HAUNTING OF HIGHWOOD MANOR

Boston Symphony Orchestra conductor Leonard Bernstein called out, raising his arms and gaze to the ceiling of a practice room in Tanglewood’s Highwood Manor, seemingly addressing an unseen specter. He was not the first, nor the last person, to feel an otherworldly presence in the oldest house on the grounds of the Tanglewood Music Festival.

Bernstein’s encounter, which took place in 1990, just two months before his death, was told two years later to The Associated Press by a staff member who was with him at the time. Highwood’s ghostly inhabitant had remained a festival secret for years — stomping down hallways, rustling papers, opening doors, turning on faucets, pulling hair and turning lights on and off — without much outside attention.

Then, in 1992, after photographs of past BSO conductors, including Bernstein, were hung on the house’s second floor, the ghost’s antics seemed to increase. They caught the attention of John Williams, then-conductor of the Boston Pops who, according to reports, decided to hunt for the ghost.

Although the identity of the Highwood Manor ghost remains a mystery, another ghost, which appeared to Bernstein during a summer concert in The Shed, was unmistakable. The ghost, which he saw pacing along the back of the stage, was that of his predecessor — longtime BSO conductor and Tanglewood founder Serge Koussevitzky.

Jennifer Huberdeau can be reached at jhuberdeau@berkshireeagle.com or 413-281-1866. On Twitter: