STOCKBRIDGE — The U.S. government’s on-again, off-again shutdown of the compact neighborhood post office serving 86 box holders in the village of Glendale is back on, this time, for sure.

In a letter to customers dated Jan. 13, Paul Buttafuoco, U.S. Postal Service operations manager, said the facility will close at noon on Feb. 20 because “the landlord is not renewing our lease.” Two days later, customers will begin picking up their mail at the main downtown post office.

It’s “deja vu all over again” following the Postal Service’s “emergency suspension of service” order issued in mid-November to take effect Nov. 21, without an official explanation. But the order was met by strong pushback from town officials, since it came on short notice in the midst of the COVID-19 pandemic.

In early December, the government agency reversed the suspension, again without explanation, offering a reprieve through the holiday season, and perhaps beyond. 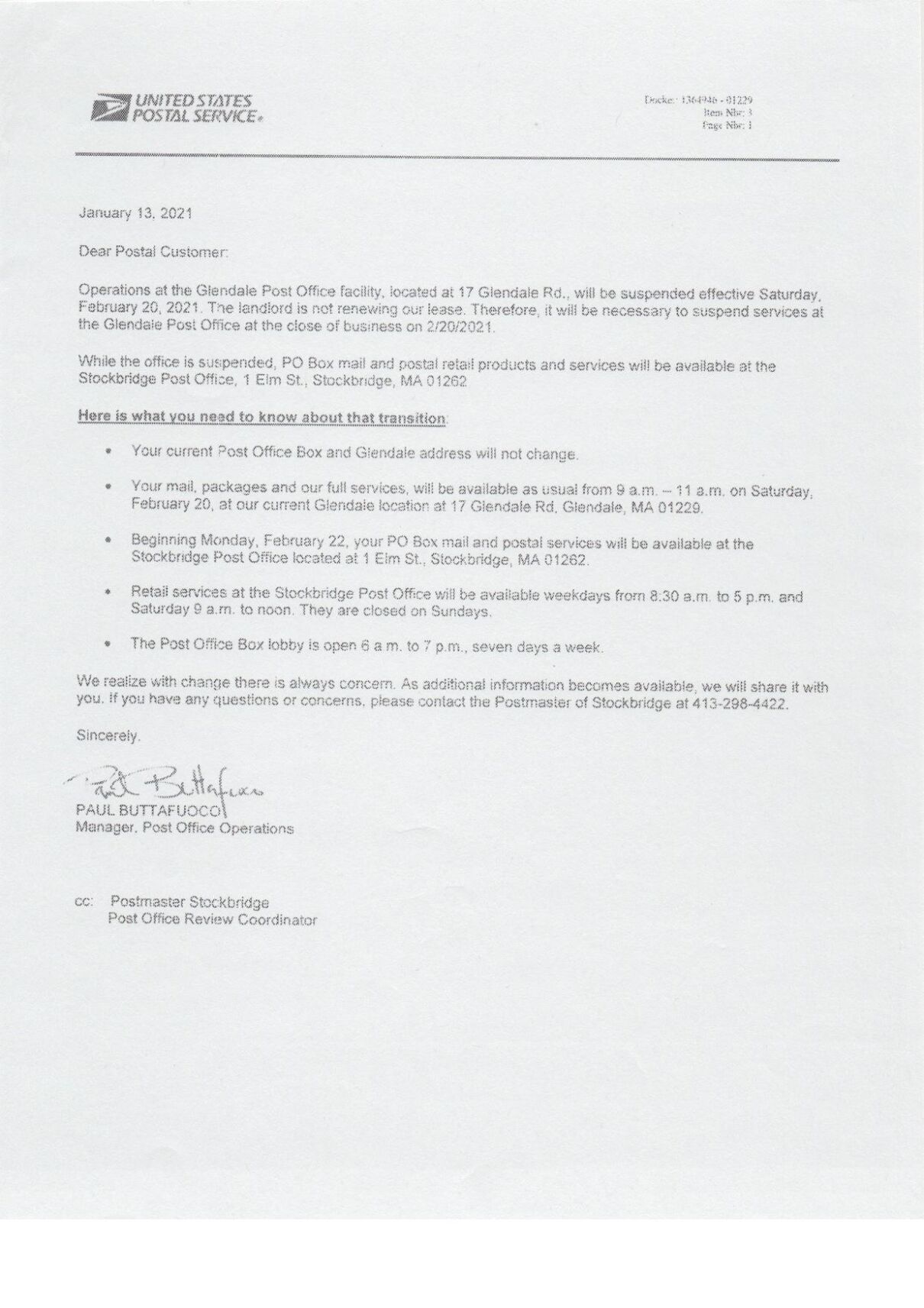 A Postal Service spokesman told The Eagle at the time that a possible alternate location would be researched. Otherwise, Glendale becomes the ninth small Berkshire community to have lost its post office. At one time, the county had 36 of them.

The former private resident at 17 Glendale Road (Route 183) has housed the post office, with its own 01229 ZIP code, since the 1960s. The landlord, John A. Miller, Jr., has not returned multiple calls for comment. Select Board member Roxanne McCaffrey pointed out on Monday that he has not responded to inquiries from town officials either.

McCaffrey cited ongoing concerns about overcrowding at the main downtown post office on Elm Street during the pandemic, since the 86 Glendale customers would be picking up their mail there starting Feb. 22. She suggested that, if the Postal Service and Miller were willing, the town might be able to fund continued service at the Glendale site, at least for a few more months, using federal COVID relief aid.

“The Board of Health still considers the closure and relocation of postal service from Glendale to town while the pandemic is worsening unwise and potentially dangerous to the public,” said Dr. Charles Kenny, the board chairman, in a message to The Eagle. “I hope the parties involve understand and weigh further the significant risks to the public health that will result from this untimely closure plan.”

The main Stockbridge post office has at least 1,000 customers who use the facility regularly, in many cases daily, because there has never been home delivery in most of the town.

“If the town had more information, we might be able to help out so that the closure could occur after the vaccination program has had a chance to slow down the plague,” Kenny stated. “Just a few months delay will lessen the risks substantially.”

“We realize with change there is always concern,” Buttafuoco, the postal service manager, acknowledged in his letter to customers. “As additional information becomes available, we will share it with you.”

Buttafuoco was not available for additional comment Monday because of the federal Martin Luther King Jr. Day holiday.

But Amy Gibbs, regional strategic communications specialist, confirmed that the impending shutdown is permanent for the Glendale Road location. She said there was no information to share on whether a search for an alternate neighborhood site would take place.

Glendale has had its own post office, in several different locations, since 1851. It used to serve more than 150 customers and was located for many years inside the former general store that closed in 1958.

Stockbridge is the county’s largest town with no carrier service, a tradition going back to 1792 when the first post office was established there. The main post office on Elm Street had a close call in 2012, when lease negotiations with the building owner hit a temporary snag.

Among other Berkshire communities that have lost their own post offices are Windsor, in 2010, and Mill River, one of New Marlborough’s five villages, in January 2020. Others include the Lanesborough village of Berkshire in 2004; Drury, a village within the town of Florida, in 1998; New Lenox in 1934; North Egremont in 1979; Savoy in 2002 and Washington in 1936.

What Berkshire County restaurants and businesses closed in 2021?

A look back at which restaurants and businesses closed during the last year.