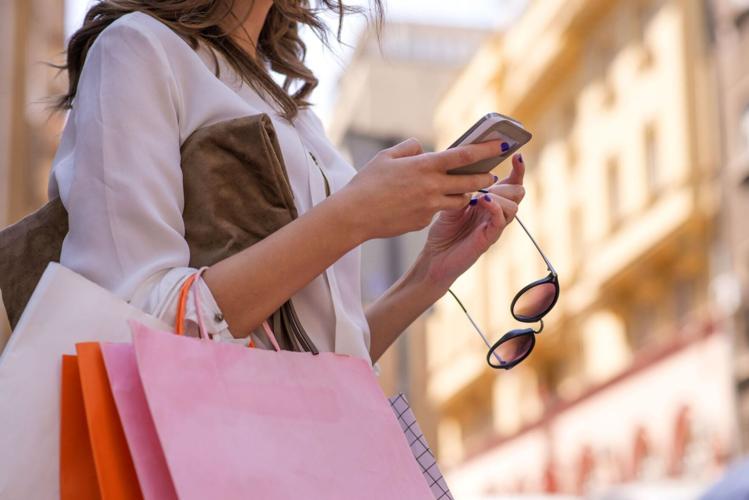 A class action lawsuit claims the Massachusetts Department of Public Health worked with Google to covertly install contact tracing apps on the Android smartphones of over one million users without their knowledge or permission. 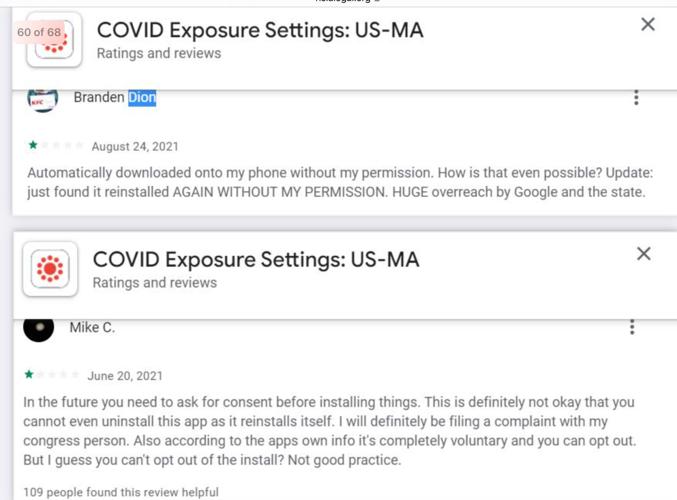 Exhibits from the lawsuit against the DPH include Google Play reviews from Android users who said the contact tracing app would auto-install without their permission. 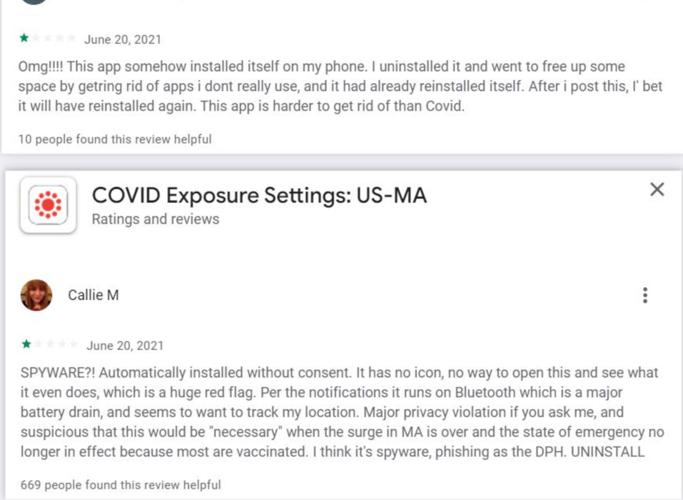 Google Play reviews are exhibits in the federal lawsuit against the DPH.

GREAT BARRINGTON — A town resident is a lead plaintiff in a class-action lawsuit against the state Department of Public Health that alleges the agency worked with Google to secretly auto-install COVID-19 contact tracing applications on the smartphones of more than a million people without their permission or knowledge.

Users who opted in to the app would get exposure notifications. But those who did not would still be tracked by location and other personal information – including data that could be traced to identify the owners – would be collected without the user’s knowledge, and even after the DPH ended contact tracing last December.

Robert E. Wright, a part-time Great Barrington resident and senior faculty fellow at the American Institute for Economic Research, is one of two initial plaintiffs listed on the complaint filed in U.S. District Court of Massachusetts Monday by the New Civil Liberties Alliance.

The suit, brought on behalf of all affected Android users, says that when the DPH made its contact tracing software application available in April 2021, few Massachusetts residents installed it, so the agency automatically and secretly installed the app on phones and tablets.

If users discovered and deleted the “hidden” app, the complaint says, the DPH would re-install it without their knowledge, and the app would do what was intended — cause the device to use Bluetooth to constantly access information with other nearby devices and create a record of those connections.

Users who opted in to the app would get exposure notifications. But those who did not would still be tracked by location and other personal information — including data that could be traced to identify the owners — would be collected without the user’s knowledge, even after the DPH ended contact tracing last December.

The data would also be available to people in various agencies and companies, including Google.

“In sum, DPH installed spyware that deliberately tracks and records movement and personal contacts onto over a million mobile devices without their owners’ permission and awareness,” the complaint says.

The DPH was one of many state public health agencies across the U.S. that said they developed contact tracing apps exclusively to contain the pandemic. States found the apps ineffective and have since ditched them. Low uptake was a problem, as citizens worried about privacy.

The lawsuit says the app is still running on the “overwhelming majority of the devices on which it was installed.” 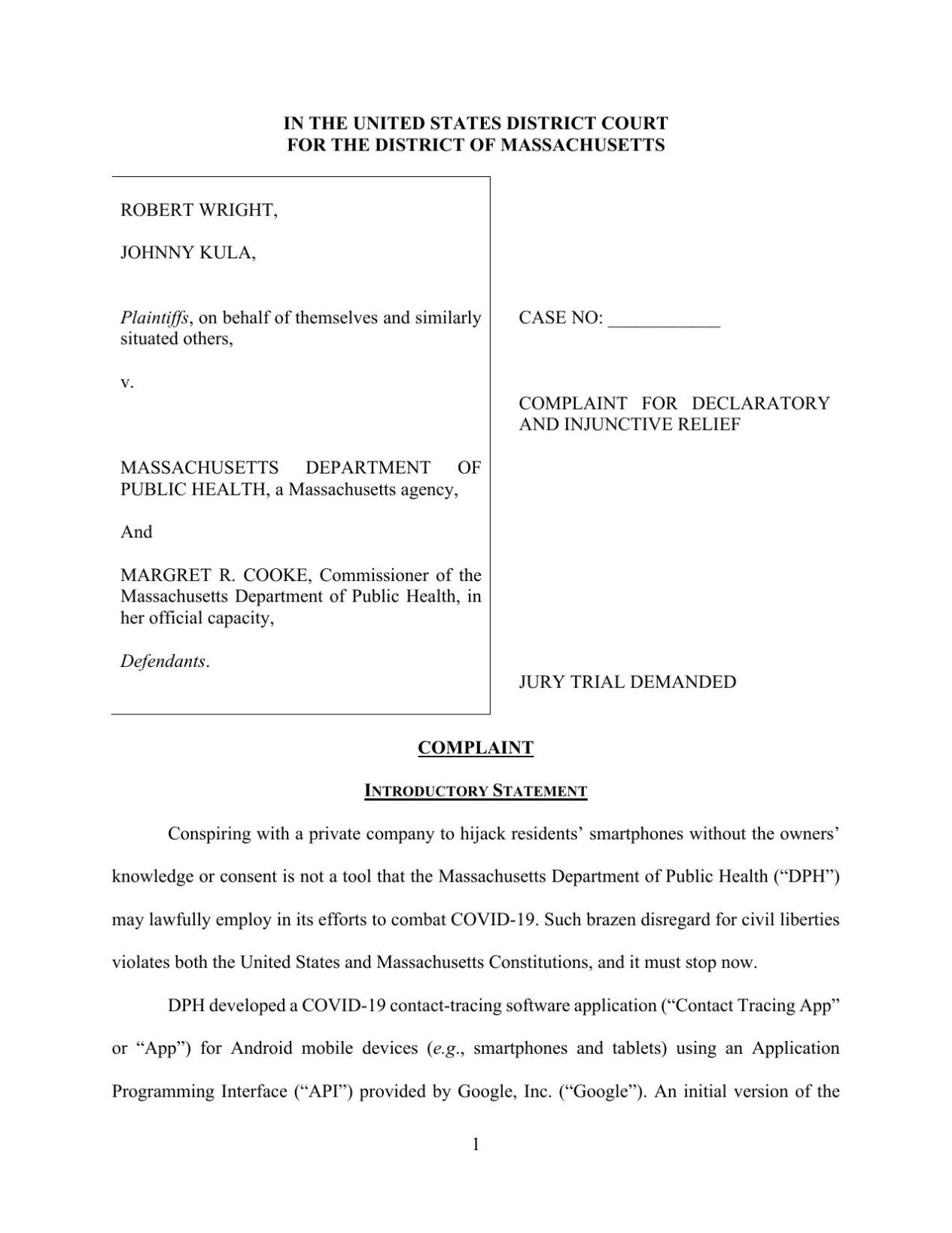 It’s not an unfamiliar privacy breach by big tech. Google just settled a $392 million suit by 40 states for continuing to track citizens’ location data even after they had opted out. Massachusetts received $9.3 million in the settlement.

The two lead plaintiffs in the DPH suit, Wright and Johnny Kula, a Windham, N.H., resident who works in Massachusetts, both say the app was downloaded onto their Android devices on or around July 1, 2021, without their knowledge.

Both deleted the app when they discovered it.

But Kula says that in November of that year, he found the app had reappeared in his device without his knowledge.

Wright said he could not comment without consulting with his attorneys from the Washington-based NCLA. Its website says it is “a non-partisan, nonprofit civil rights group” that works to fight overreach by the administrative state. It was founded by Columbia Law School Professor and constitutional scholar Philip Hamburger.

Peggy Little, senior litigation counsel at the NCLA called the allegations against the DPH an “android attack deliberately designed to override the constitution” and one that “reads like dystopian science fiction.”

“The Massachusetts DPH, like any other government actor, is bound by state and federal constitutional and legal constraints on its conduct,” she said in a press release.

When asked if the allegations are true and how personal information from contact tracing is guarded a spokesperson for the DPH said the agency did not receive any documentation related to the lawsuit and cannot comment on pending litigation.

A spokesperson for state Attorney General Maura Healey’s office did not respond to an email with questions about whether Healey, who will become governor in January, is taking any action over the privacy breach.

Evidence in the case includes poor reviews of the DPH’s app on the Google Play Store. These include reviewers complaining that the app downloaded onto their mobile devices, hid in “settings” instead of as an icon, and automatically turned on Bluetooth.

“SPYWARE?!,” wrote one reviewer. “Automatically installed with consent. It has no icon, no way to open this and see what it even does, which is a huge red flag. Per the notifications it runs on blue tooth with a major battery drain, and seems to want to track my location.”

Another reviewer complained that they have limited data, and always turned off settings that use up data, but that the app had turned them all on.

New multi-state data privacy settlement finds that even when you had your 'location history' setting turned off, Google was still tracking your movements

The suit lists nine counts, the first being a Fourth Amendment violation.

For relief, the plaintiffs ask the court for an injunction against continued installation of the app without the knowledge of users. They also ask for a number of declarations about the lawlessness of the clandestine installations.

It asks for $1 in “nominal damages,” as well as all costs, expenses and attorneys fees.

Wright’s workplace in Great Barrington, AIER, is best known as the location where three scientists in Oct. 2020 signed the controversial Great Barrington Declaration and started a petition against lockdowns and COVID-19 measures.

The paper and petition urged COVID-19 policy that would focus protection on the most vulnerable, while allowing the young and healthy to live normally to avoid the public health fallout caused by lockdowns, closed schools and other shutdowns.

Those who penned Great Barrington Declaration a year after it sparked worldwide firestorm: 'This is our crucible'

NCLA also represents two of the declarations authors, Martin Kulldorff and Jay Bhattacharya, who joined a suit by two states and several others against President Joe Biden and members of his administration — including medical advisor Dr. Anthony Fauci — for working with social media companies to censor people expressing views that conflict with the government’s COVID-19 messaging.

The NCLA is involved in a wide range of litigation, including a slew of cases related to COVID-19 policy. The group is criticized for receiving extensive funding from billionaire Charles Koch, a libertarian who has funded what are considered right wing or Republican causes.

Google is tracking us. Here is what it sees in the Berkshires.

In the Berkshires, people are going out slightly more than in the winter weeks just before the pandemic hit, and still going to their workplaces less often. Google is tracking us with cellular location data, and it shows where a sample of people are going in the Berkshires and beyond, and has categorized this information to help public health officials fight COVID-19.