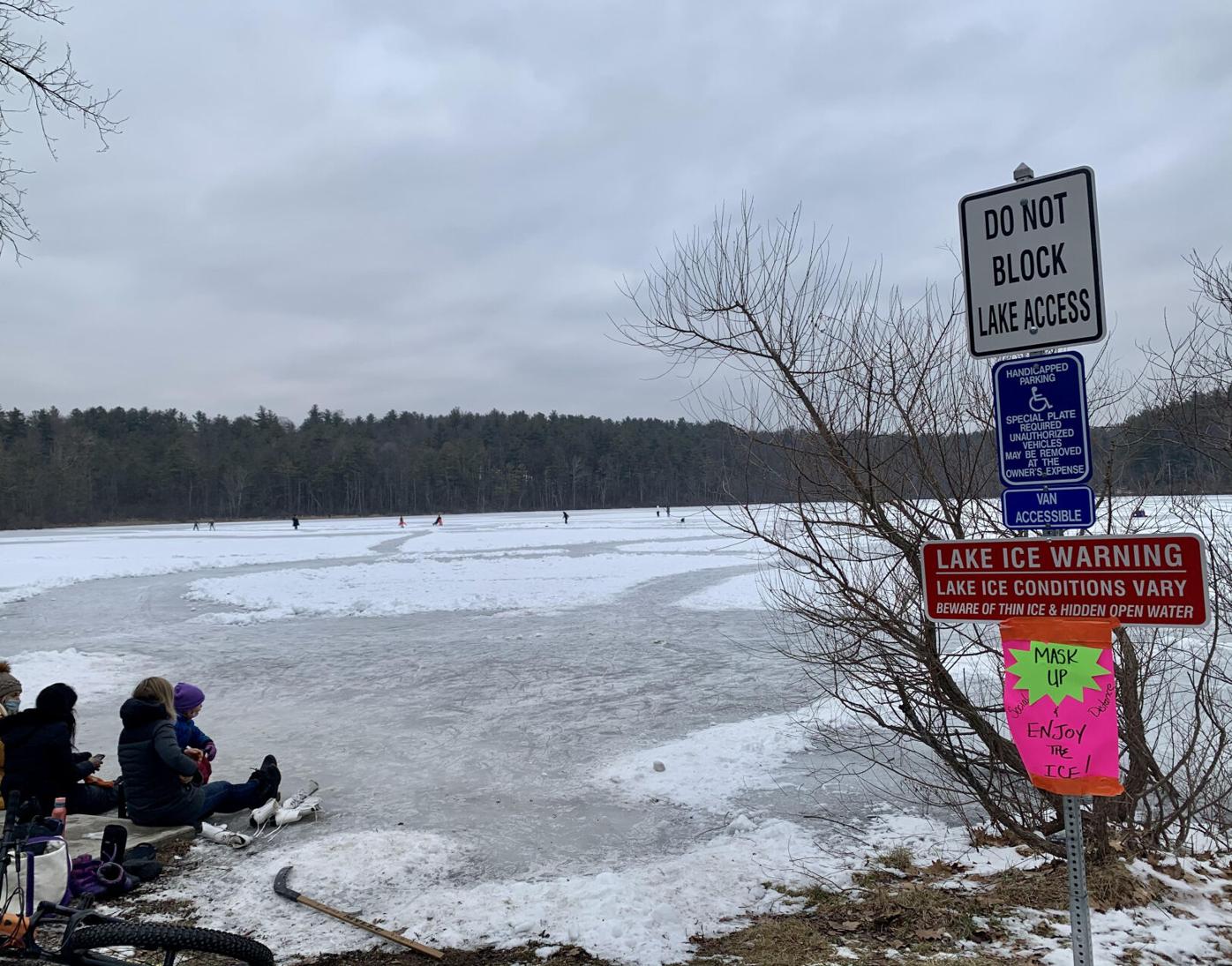 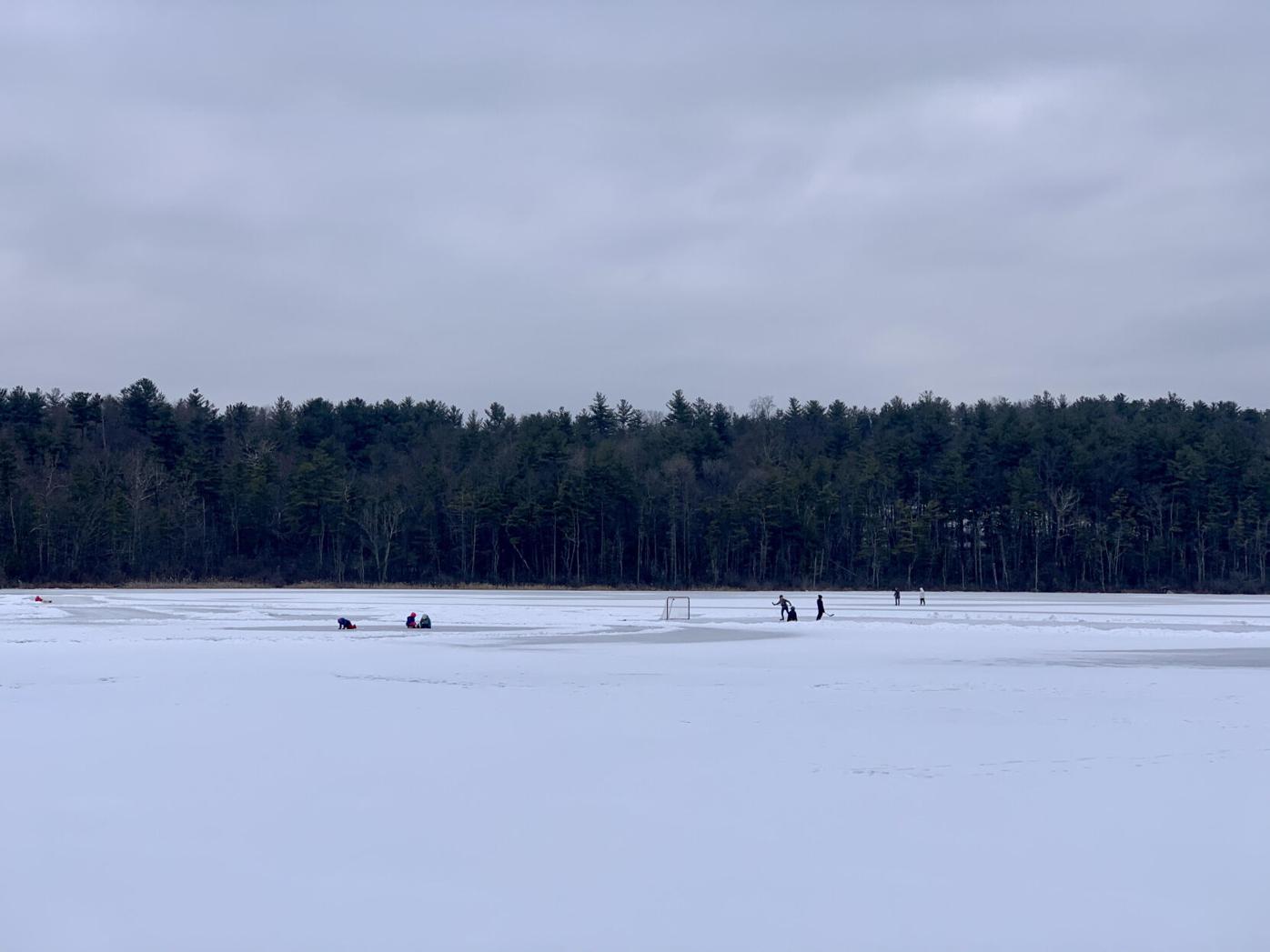 Skaters playing hockey Wednesday on Lake Mansfield in Great Barrington. On Sunday, it was a different story, with apparently between 30 and 50 mostly children on the lake and not wearing face masks.

Skaters playing hockey Wednesday on Lake Mansfield in Great Barrington. On Sunday, it was a different story, with apparently between 30 and 50 mostly children on the lake and not wearing face masks.

GREAT BARRINGTON — Town police will add Lake Mansfield to their routine patrol rounds after reports of a large gathering of mostly young ice skaters Sunday, with apparently none wearing masks.

Several residents — including a local health official from another town — emailed town officials to report that between 30 and 50 people were on the lake and not wearing face coverings. In response, Police Chief Paul Storti said he would have an officer drive by the lake in the course of regular patrols.

In the event of non-compliance, Storti said police will encourage people to wear masks and work with the Board of Health if need be. But, Storti is practicing de-escalation. “We try to keep the peace, and that’s our objective,” he said, “to make sure that everybody can work together and get through this, and making sure people aren’t overreacting or taking it to another level.”

According to Storti and town Health Agent Rebecca Jurczyk, it appears to be the first such dust-up in town involving a large group since the coronavirus pandemic struck in March. Gov. Charlie Baker began issuing orders that eventually included a mandate to wear face coverings in public areas indoors or out.

Amid the recent uptick in virus cases, Baker also lowered the acceptable gathering size to 10.

In an email to Jurczyk and other town officials obtained by The Eagle through a public records request, Scott McFarland, who is also health agent for the town of New Marlborough, described the violations as an “egregious flouting” of COVID rules.

McFarland had gone to the Lake Mansfield Recreation Area to ski and skate at 3 p.m. and encountered cars with both Massachusetts and New York license plates lining the “full length” of the road. The lot also was full.

He saw a group of around 34 playing hockey in one area, with the rest on other parts of the lake. He then learned from a neighbor and friend who lives next to the lake that much of the group may have traveled from nearby towns across the New York border.

McFarland’s friend told him that when he questioned one of the adults about the group size and asked them to wear masks, the person replied that “there isn’t a virus or pandemic,” and the group would not wear the coverings.

A police officer arrived and said the matter was the purview of the Board of Health. The group left around dusk, McFarland wrote. He asked the town for a way to deal with such violations in the future.

Jurczyk said her understanding from various sources was that most of the skaters were children and teens. She also said that, technically, Baker’s travel restrictions would apply, since they crossed the state line.

Jurczyk said she hasn’t yet encountered this type of violation. “We’ve certainly had gatherings,” she said, “but this is the biggest one and the most insubordinate that I’ve heard of.”

Storti said he’s only seen a few incidents in which one person refused to wear a mask inside a local business.