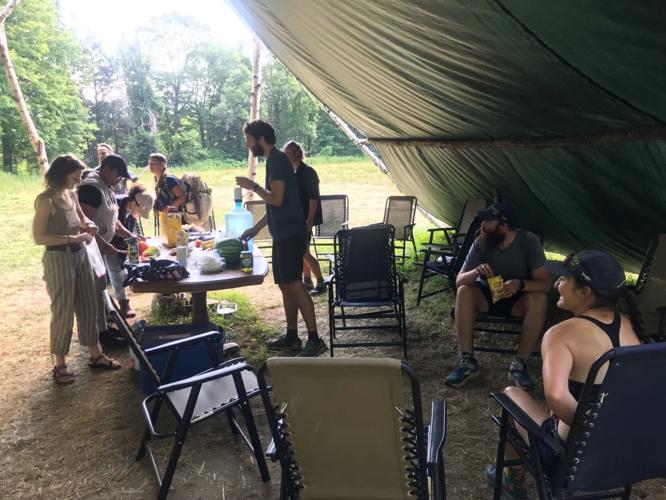 Hikers stop in at a comfort station hosted by two Sheffield churches and staffed by volunteers. 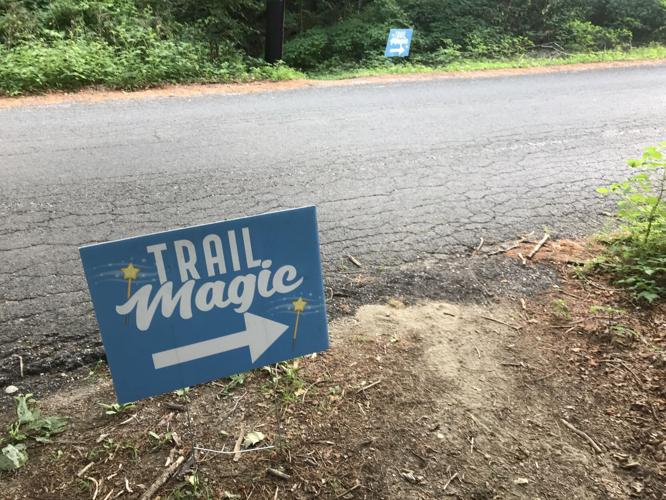 Quite likely, Appalachian Trail hikers knew this sign was coming up in South County. The term refers to kindnesses shown to hikers along the entire trail route. 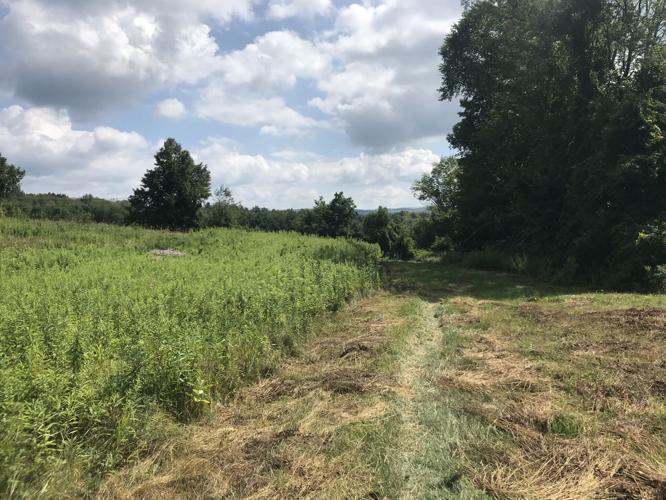 Jochem writes: "Sometimes the route and terrain is flat and grassy, like walking through a field next to grazing cows, or making your way up a dirt road with valley views." 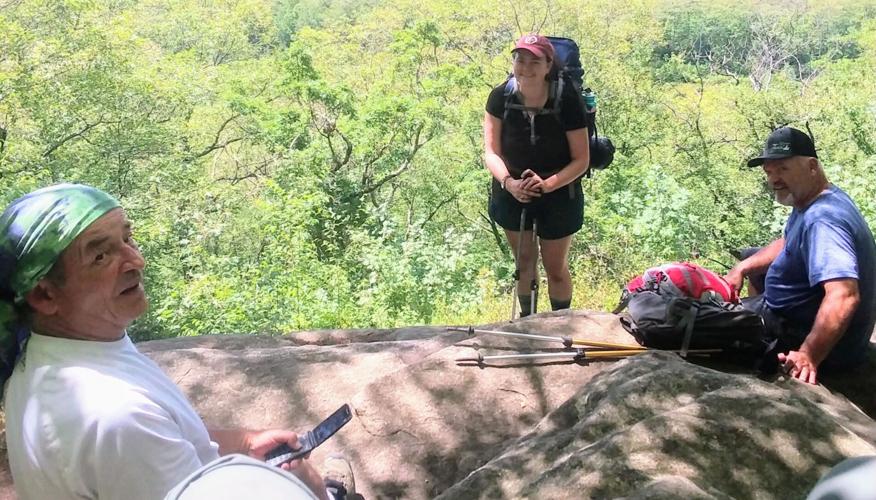 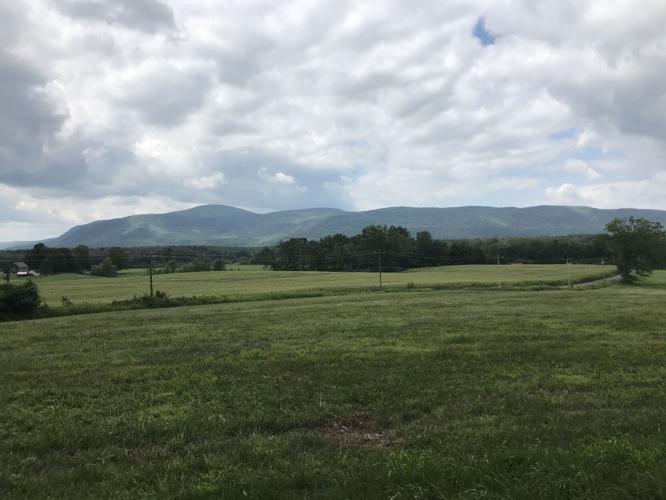 Open lands and woodlands. The Appalachian Trail's route through Massachusetts offers both. 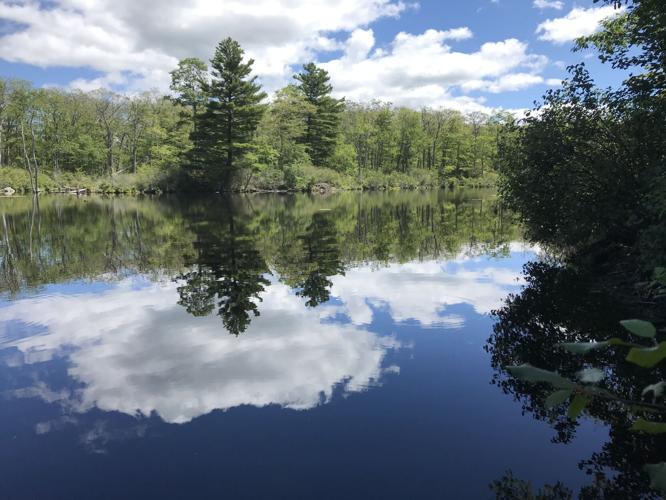 Hikers entering Massachusetts from the Connecticut border encounter this pond about 25 miles north into Berkshire County. 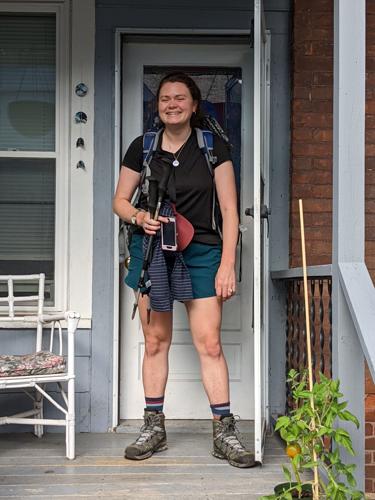 Greta Jochem leaves her home Monday in North Adams, en route to the start of her Appalachian Trail hike.

Berkshire Eagle reporter Greta Jochem is providing dispatches from a trip north on the Massachusetts section of the Appalachian Trail. She hit the trail Monday at the Connecticut line. One of the first hikers she encountered told her: “Backpacking, you get to see a lot of the world you normally wouldn’t see.” Over the next week, Jochem will bring that world to you.

“Trail magic,” a blue sign proclaimed at a road crossing in Sheffield. It pointed hikers toward a clearing. Then no sign was needed.

Beckoning us in: The sound of hot dogs and hamburgers sizzling on a grill.

I found a half dozen hikers gathered in camp chairs, laughing and talking. Some were meeting for the first time, others catching up.

Why are churches doing this? It’s not about proselytizing, Graham said. The trail runs through town. “My husband was often bringing people home he picked up on Route 7.”

In search of 90 miles of news, an Eagle beat reporter hits the Appalachian Trail

This kindness on the AT started in 2018, then expanded in 2021 from a few days a week to six by bringing in guest groups to volunteer. A group of workers from a church in the Connecticut River Valley was on hand Tuesday, cooking burgers and offering cold drinks and bug spray. Recently, members of the Southern Berkshire Chamber of Commerce volunteered, Graham said.

They do it for about eight weeks in the summer, ending in mid-August. “This is the bubble here — when the bulk of hikers come through,” she said of activity this week. More than 20 guest groups have volunteered so far this summer, helping 600 hikers, or about 20 day.

The church has received grants to support this work and accepts donations from volunteer groups to cover the cost of the project — about $50 to $75 per day.

Graham’s stepson has spent time on the trail. When he was injured, he received what she terms “profound trail magic.” She wanted to pay it forward. “It’s the smallest of gestures that have a large impact on the lives of those traveling.”

Recently, Graham met a hiker who was whispering when he arrived, struggling to get words out, because he didn’t have enough water. With the drought, water sources are limited.

Sometimes she hears deeply personal reasons why hikers are on the journey, some of them working through grief. “It has a mutual benefit of blessing,” Graham said. “What the hikers get out of it is as much as what the volunteers get.”

I realized at the end of my second day that I had blisters forming. One was as large as a quarter. I’ve had my shoes for about eight years, so I can’t blame that. My feet just aren’t used to walking so much with a heavy pack.

How heavy is the pack? I couldn’t tell you. I was not brave enough to weigh it. Heavy.

At the trail’s Tom Leonard campsite, I asked around to borrow a pair of scissors to cut blister padding I brought, after struggling to handle it with a pocket knife. A hiker packing up his gear didn’t bat an eye when he saw the blister and handed me a special blister bandage he swears by.

As I treated my injuries, another hiker shared blister stories. For several hours, my medical remedy worked. It no longer felt I had a water balloon near explosion under my sock.

Thirty-two miles in, I’m feeling a bit of pain in the leg I broke two and a half years ago. I took a hard hit playing roller derby and had surgery to fix it. I’ve since retired from derby. My parting gift is a bunch of metal pins in my leg.

I was surprised when my physical therapist told me it would be a year until I could do any intensive hiking again. Years later, it usually doesn’t bother me, but does tire out more quickly. A little stretching and ibuprofen help a lot.

Still, I very much appreciated the gesture of getting one from a hiker I met. But I had to really work to finish it.

‘Till I get there’

The last mile or two before the campsite I’m staying at I find the most difficult — I am often checking my GPS to see how much further, as if it makes a difference. I’ll keep walking till I get there.

At the summit of Mount Everett, one hiker told me he planned go into Great Barrington to resupply. He planned to hitchhike. To go more than half a mile off the trail, he likes to snag a ride.

One hiker told me he usually hikes for four days at a time, then goes into a town to resupply his food, and if he’s lucky, do laundry.

While waiting at a road crossing Wednesday, I was surprised to meet a fellow North Adams resident on the trail. No way, you’re from North Adams? I asked.

Me too, added Kevin Boisjolie. He’d come out Wednesday for a day hike with his friend, Jim Wolfe.

But it’s not just a day commitment for these two. Several years ago, someone hiking the Appalachian Trail told Wolfe he’d heard, from somewhere, that the city of North Adams is not particularly friendly to hikers.

Wolfe, who lives near the trail in North Adams, says he wanted to change that perception.

He started putting items in a kiosk on the trail near Greylock Elementary School on Phelps Avenue. Someone else came by and warmed to the idea. “Gee, that’s a good idea,” Wolfe recalls the person saying. “Mind if I put a cooler there?”

Today, the offerings at this bit of trail magic can be “very eclectic,” with items like candy, sardines, dog food, juice, soda. “And a lot of ramen noodles,” Wolfe said.

He said he’ll fill the cooler three times on the weekend, in the busy season. Hikers leave messages of thanks. When he reads the notes people jot in the logbook, “it makes you run to the store and put stuff in.”

Boisjolie helps with the kiosk. Two years ago, he and Wolfe hiked all of the Massachusetts section. Boisjolie feels that people in the Berkshires could do more to interact with hikers.

In some towns along the trail, from Georgia to Maine, “they cater to people hiking,” he said.

I hiked with Boisjolie for a bit, talking about North Adams news and hiking spots. As I walked away from them, after they took a break at an outlook, Wolfe asked me to text him when I was close to the North Adams kiosk. He wanted to be there.

Step by step, having a mantra helps

The trail snakes along, crossing roads, streams and, at least once, railroad tracks.

We hike past wooden structures added to make the trail easier, like wooden bridges over muddy areas or rivers. This off-road infrastructure seem well-maintained.

Sometimes the route and terrain is flat and grassy, like walking through a field next to grazing cows, or making your way up a dirt road with valley views. Other times the trail leads you up an unrelenting rock staircase.

Almost always, the sweat rewards you with a view.

At least the directions are easy: follow the white blazes, or marks, on the trail. When going uphill now, I think about what one hiker, Erin Wolf, aka Lone Wolf, told me.

And a friend uses another mantra: “I can do hard things.”

A member of the 'gray walkers' offers this sisterly advice on the Appalachian Trail: Embrace the stink

Follow along as Berkshire Eagle reporter Greta Jochem hikes the Appalachian Trail through Massachusetts, giving readers an inside look, in this third dispatch since her trip began Aug. 1, at what the experience is like.