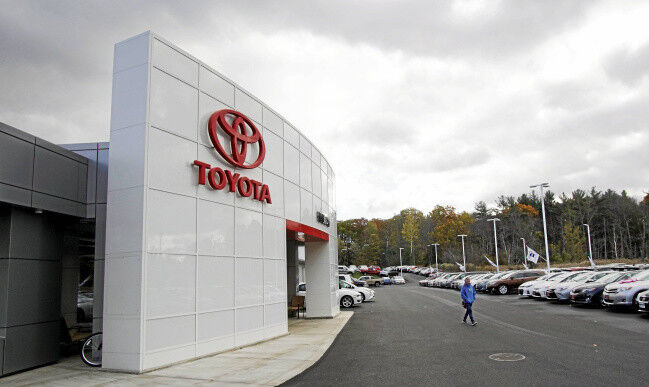 The renovation of Haddad Motor Group on South Street (Route 7/20) on the Pittsfield/Lenox line is nearly complete, with more room for customers, more service areas and even in house auto insurance. 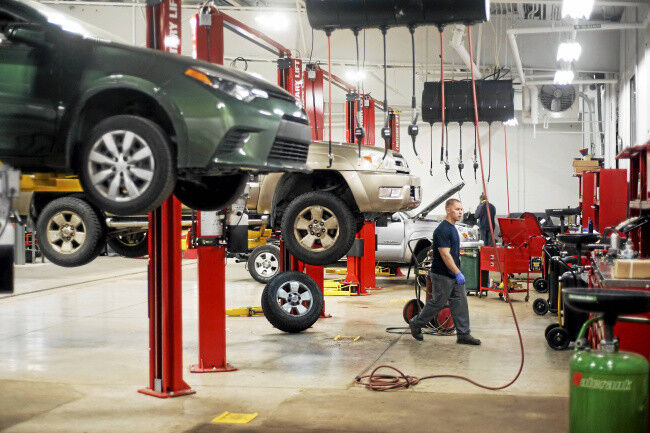 Mechanic John VanDeusen works on a car at Haddad Toyota in Pittsfield. The facility has just been renovated for 5 million and has 29 lifts in the service area, making it one of the largest service departments Western Massachusetts. 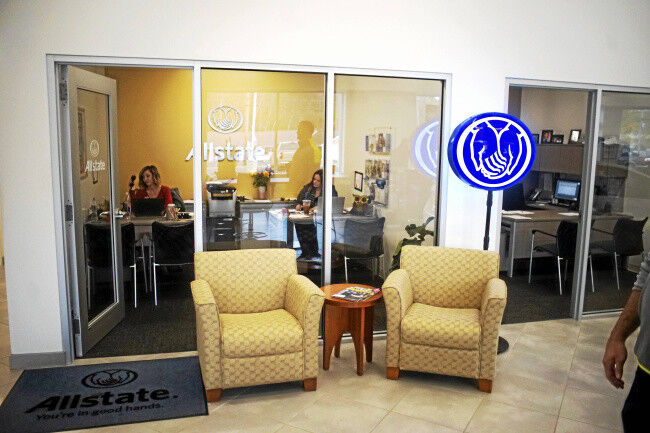 The renovation of Haddad Motor Group on South Street (Route 7/20) on the Pittsfiled/Lenox line is nearly complete, with more room for customers, more service areas and even in house auto insurance. Monday, October 24, 2016. Ben Garver — The Berkshire Eagle 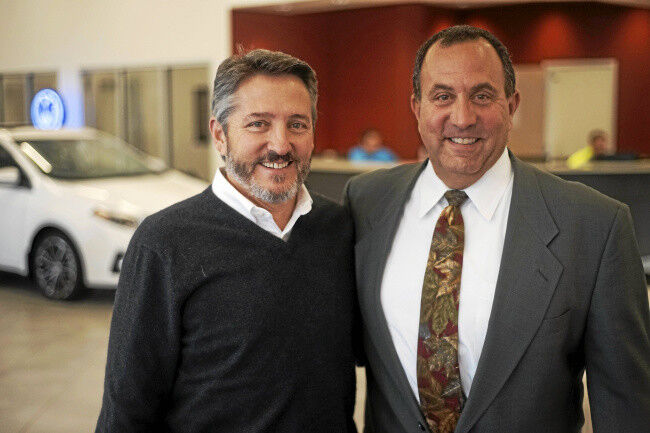 Mike Coggins and George Haddad have renovated the Haddad Toyota dealership to reflect a focus on customer service. 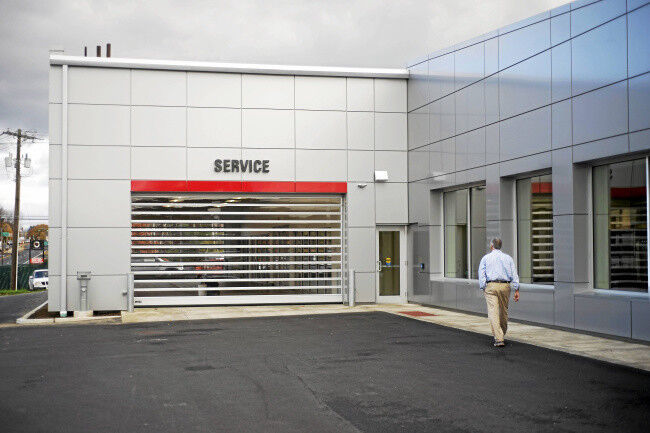 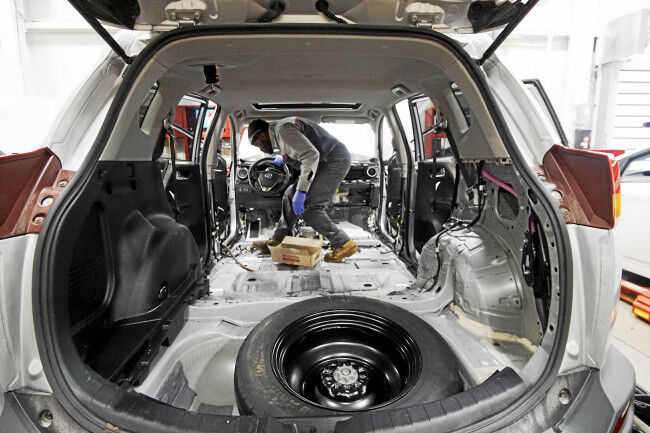 The renovation of Haddad Motor Group on South Street (Route 7/20) on the Pittsfield/Lenox line is nearly complete, with more room for customers, more service areas and even in house auto insurance.

Mechanic John VanDeusen works on a car at Haddad Toyota in Pittsfield. The facility has just been renovated for 5 million and has 29 lifts in the service area, making it one of the largest service departments Western Massachusetts.

The renovation of Haddad Motor Group on South Street (Route 7/20) on the Pittsfiled/Lenox line is nearly complete, with more room for customers, more service areas and even in house auto insurance. Monday, October 24, 2016. Ben Garver — The Berkshire Eagle

Mike Coggins and George Haddad have renovated the Haddad Toyota dealership to reflect a focus on customer service.

LENOX — He started by washing cars on weekends for the family business in his early teens. Now, George L. Haddad, 57, third-generation president of the Haddad Motor Group, is celebrating the just-completed, $5 million-plus, ground-up rebuild of his flagship Toyota dealership on Pittsfield Road (Route 7 and 20).

Construction began 18 months ago to achieve the streamlined, contemporary look recommended by Toyota Motor Sales as a standard design and construction template for all its dealers, including a grand-looking entranceway and prominent sign.

During a walking tour of the brightly-lit, spacious sales area and dramatically expanded service facility with his business partner since 2000, Vice-President and General Manager Mike Coggins, Haddad explained that the existing building was "almost stripped right down to nothing" as electrical service was brought up to code and a state-of-the-art HVAC system was installed.

"We really completely went through the building," he said. Sales customers are in "a cleaner, customer-friendlier environment" with new lighting while those waiting for service have a more spacious cafe and lounge, he pointed out.

While Toyota does not kick in financial support for the renovation, the company helps Haddad by making more vehicles available to the dealership for sale, increasing the allocation for models in short supply such as Highlanders and RAV-4 SUVs, as well as hot-selling Tacoma and Tundra trucks.

Throughout the prolonged construction project, approved by the Lenox zoning board in December 2013, the store took only a "negligible hit," said Haddad, thanks to cooperation from the employees and the loyalty of steady customers.

Now that the work is done eight months beyond the original target date, about 20 jobs have been added, bringing the company's staff count to 105 at the Toyota store and nearly 200 total among the group's multiple locations in Lenox and Pittsfield. The total annual payroll comes to $12.8 million, with $6.3 million of that at the Toyota store, mostly "good-paying jobs," Haddad emphasized.

The Toyota dealership now averages 180 to 190 new and used-car sales monthly, and is servicing or repairing nearly 17,000 vehicles a year, including body work at the new Collision Center in Downing Industrial Park. Overall, pre-owned vehicles account for about 45 percent of total sales at all four Haddad stores, including the Subaru, Nissan and Hyundai franchises in Pittsfield.

"You're driving into a showroom when you pull in for service," he said. The addition of 10 new service bays, with 34 in all, accommodates many more customers per day. Also new are two "quick lube" bays offering fast, no-appointment oil and tire changes for any model vehicle.

Toyota still offers free two-year maintenance, an incentive Haddad lauds as "phenomenal, for the first 25,000 miles customers gets their basic service taken care of and Toyota reimburses us for it."

Service has become much more complicated, he explained, because of high-tech diagnostic and repair tools requiring advanced-skill mechanics. But revenue from service has soared to about 50 percent of the total bottom line, while leases now account for nearly half of the sales volume at the four franchises, especially Toyota.

Resales of formerly leased and "pre-owned" vehicles are a growing segment of the market, Coggins noted, as the dealerships focus on attracting customers inside Berkshire County, rather than competing in Springfield or in Albany, N.Y.

"We concentrate on local people and do the best we possibly can to keep everybody local," he commented, "and not worry about outside the area." The company's ubiquitous marketing slogan remains, "We'll keep your business in the Berkshires."

Coggins, acknowledging forays by out-of-county dealers to snag a share of Berkshire customers, explained that "when we see that, we just hunker down a little stronger and make sure we don't lose any deals. It's just a scrap and you've got to be aware of what's going on. Pretty soon, they get discouraged and go away."

Since 2010, after sharing the Lenox site with other lines such as Pontiac, Buick, Chrysler-Plymouth-Jeep and Hyundai, Toyota has had the 5.5-acre location all to itself. The northern driveway exit is just across the town line in Pittsfield, along with about 45 adjacent acres owned by Haddad's G & L Realty.

Of all new-car sales among Berkshire County dealers, the Haddad stores hold a 54 percent market share, Haddad said, with Toyota number one and Subaru in second place, followed by Nissan in a third-place scramble with Honda (sold by Bedard Bros. in Cheshire). Hyundai holds fifth place. Taking into account sales to Berkshire County drivers by out-of-county dealers, the Haddad Motor Group share comes in at 48 percent, Coggins reported.

With customers now in the driver's seat when they enter the showroom thanks to invoice-cost information available from Consumer Reports and numerous commercial websites, Haddad focuses on internet marketing and advertising, Coggins said.

"There aren't many businesses where you have to negotiate with the customer who knows your cost," he acknowledged. "It makes it a little more difficult in some cases, but in most ways it makes it easier. The customer is more educated, it's an easier negotiation. People used to think there's a 40 percent markup on a car, now it's out there, more transparent."

"Now you go online and see that the $12,000 car really cost the dealer $11,000 rather than the $7,000 you used to think," Haddad said. "It gives you a guide so a customer has more realistic expectations and they can have fun negotiating because now they know."

Another recent shift in the business is the drop in fuel costs — "nobody's worried about gas right now, so people are buying trucks," Haddad commented. But whenever gas prices go up, the "very reactive" public shifts right back toward smaller vehicles, he added.

"It's a lot of money to put in," Haddad conceded about the $5 million upgrade expense, "but hopefully we'll get it back. Everything we did was to bring this back to life as if it were a brand new site."

As for future projects, he has none to discuss right now. "You've got to keep growing, keep looking," he advised. "Right now, we're in a good place. If we rest on our laurels, we get in trouble."

1932: George A. Haddad opens a used-car lot on East Street in Pittsfield.

1936: He opens a Pontiac franchise on Pittsfield's West Street in a former horse barn where the Crowne Plaza hotel is now situated.

1969: Following urban renewal on Pittsfield's west side, George and his son Louis (who had joined the business in 1951) open a new store on Pittsfield Road (Route 7 and 20) in Lenox on open land near the former Penguin miniature golf course and Howard Johnson's, later the Dakota and now Enso.

1970: On Jan. 1, George and Louis Haddad acquire a Toyota franchise for a two-bay garage across from Pontiac but a year later, on the advice of Toyota's Boston distributor, moves that business to the larger flagship store.

1981: George L. Haddad, son of Louis and grandson of the founder, joins the family business.

1988: George Haddad purchases Slattery Buick-Jeep and moves the franchise to the Pittsfield Road location, doubling the size of that facility and later adding Chrysler-Plymouth-Jeep and Hyundai lines.

2010: Two years after purchasing two Pete's Motors sites on East Street in Pittsfield. Haddad Hyundai and Haddad Subaru open on opposite sides of the street. Toyota is now the sole brand at Haddad's Lenox flagship.

2016: In October, Haddad holds opening celebration for its totally renovated Lenox dealership, a major project overseen by Integrated Builders of Rockland at a cost of just over $5 million. The business earned the Toyota President's Award for the 8th straight year, given to 15 percent of dealers nationwide, based on customer satisfaction and retention, employee certification, market share and dealership profitability.