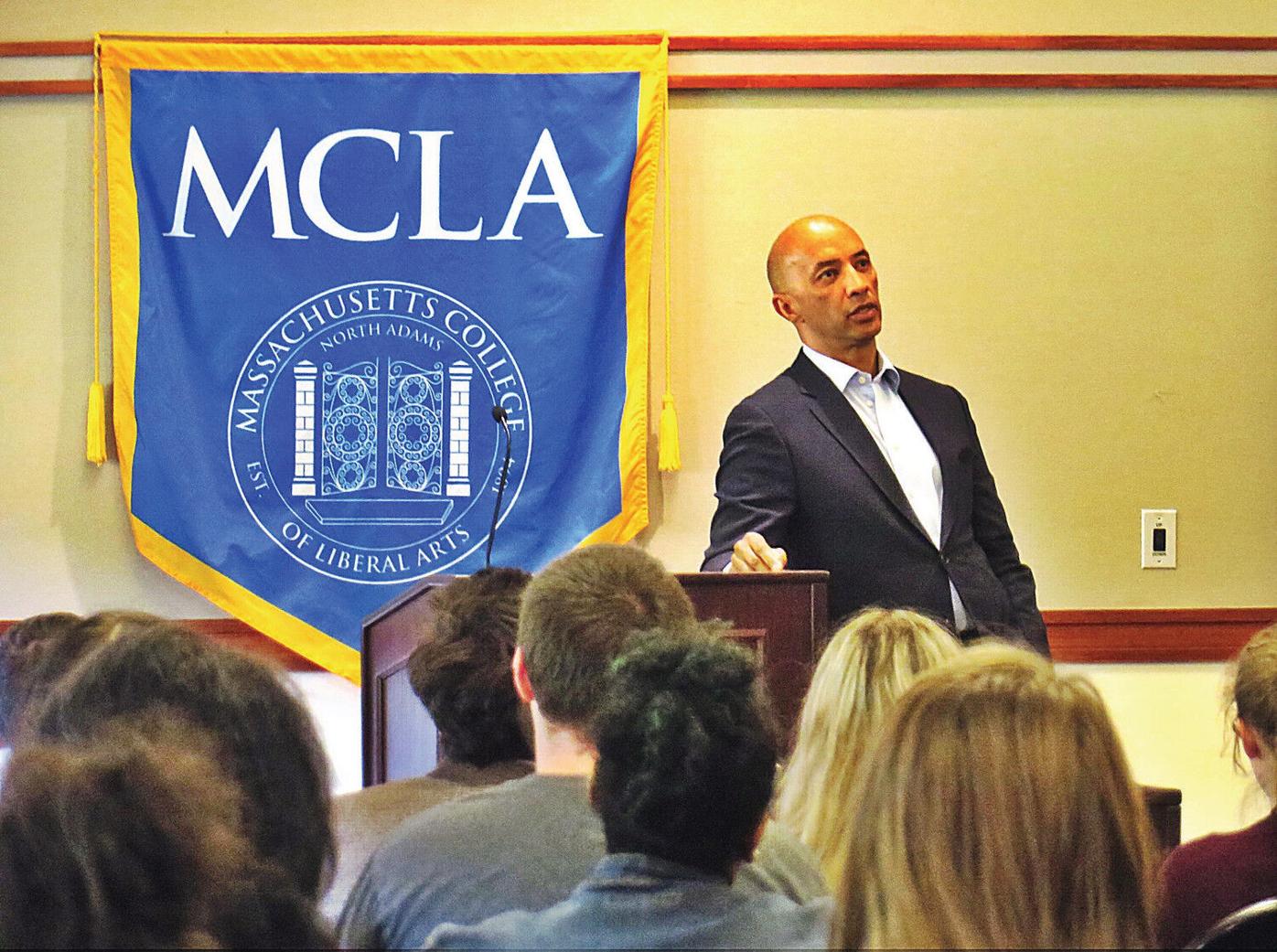 ABC "Nightline" co-anchor Byron Pitts talks to students last month at the Massachusetts College of Liberal Arts. He served as the keynote journalist for this year's Hardman Lecture on democracy and the media. 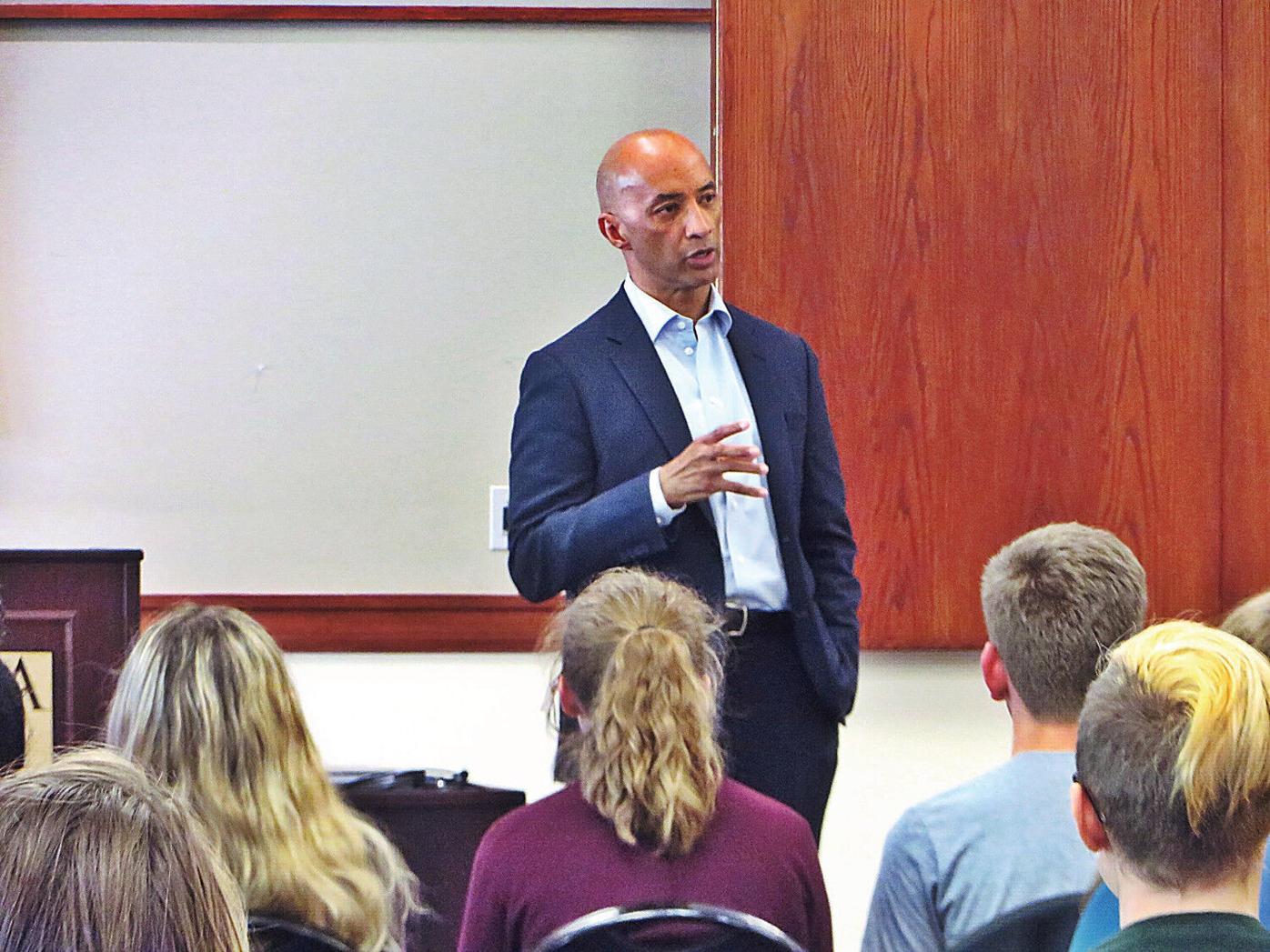 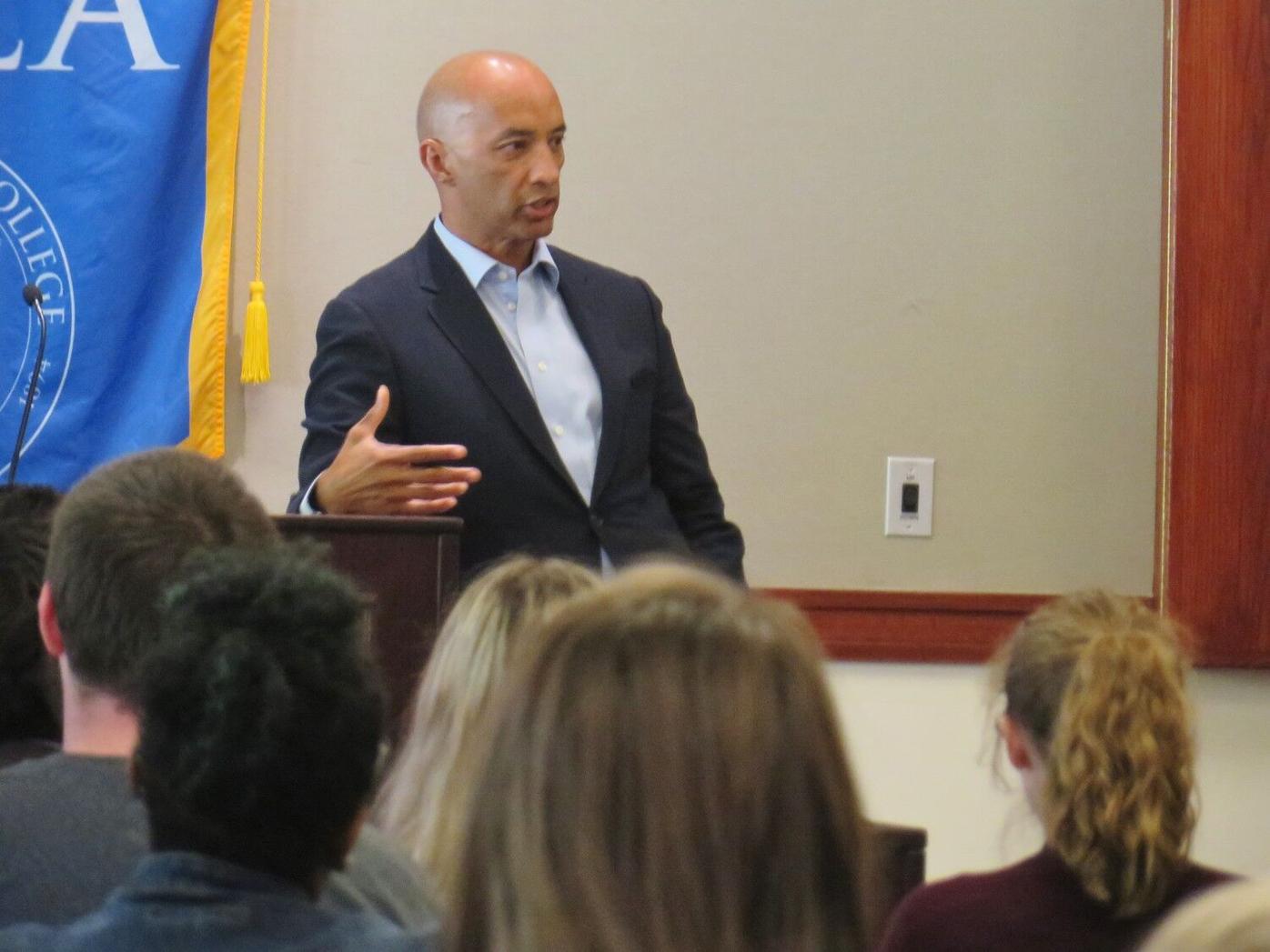 ABC "Nightline" co-anchor Byron Pitts talks to students last month at the Massachusetts College of Liberal Arts. He served as the keynote journalist for this year's Hardman Lecture on democracy and the media.

NORTH ADAMS — To drive for a deeper range of reporting, sourcing and perspectives in mass media, Byron Pitts says media companies need to fuel the change by building a more diversely skilled and experienced news team.

Pitts recently visited the Massachusetts College of Liberal Arts to present its annual Hardman Lecture on journalism, a popular field of study and discussion on campus. This Thursday, legal expert Jeffrey Toobin, senior analyst for CNN and staff writer for "The New Yorker," will present at 7 p.m., the seventh annual Michael S. and Kitty Dukakis Public Policy Lecture, "Inside the Secret World of the Supreme Court," in the MCLA Church Street Center's Eleanor Furst Roberts Auditorium.

The topic of Pitts' October talk was billed as "Mass Media and Democratic Governance: The American Experience," but the journalist expanded his discussion with students and faculty, who asked about his personal experiences in the field, as well as about his new book, "Be the One: Six True Stories of Teens Overcoming Hardship with Hope."

Early on in his career, Pitts found few people like himself in his field.

"Where you're a poor person of color, the world greets you in a different way," he said.

Pitts grew up in a working class Baltimore neighborhood, was raised by a single mother and is a proud Baptist Christian. He struggled in his youth with literacy and a stutter. It's why he chose to highlight the adversities of young people today in his new book. "I know what it felt like to grow up voiceless," he said.

But Pitts had a goal to overcome the odds with his living environment and learning challenges, and made his way to Ohio Wesleyan University to study journalism and speech communications to exercise his "love of words and the ability to communicate."

Pitts credits a support network of family, faith and friends for helping him succeed. He would go on to earn an Emmy for his Ground Zero coverage for CBS immediately after the Sept. 11 attacks; then travel the world to cover major issues like the war in Afghanistan, the aftermath of Hurricane Katrina, the military buildup in Kuwait, the refugee crisis in Kosovo, the life and death of Nelson Mandela, among other events.

Pitts details his journey and the struggles and supports he encountered in his first book, "Step Out on Nothing: How Faith and Family Helped Me Conquer Life's Challenges." He published it in 2010, after spending a decade in East Coast local news markets then more than a dozen years working his way up the ranks for the CBS network.

But his personal and professional goals plateaued as his work environment became stagnant. He characterized CBS as an "old school institution" where leadership was predominantly white men in their 50s and 60s. Pitts, now 57, said that during his 15 years at the network, he had only two female bosses, worked with one openly gay person and a handful of people of color.

Pitts said he saw greater opportunity at ABC, which he joined in 2013, where five out of seven executives were women, and leadership included people who identified as African American, Latino and Muslim and a greater age range of producers and leaders than at CBS. "ABC was more reflective of the world I want to live in," he said.

MCLA sophomore Dominique Stevenson-Pope of South Hadley, who is studying history and secondary education, further raised the issue of inequities in mainstream media. She gave the example of how when a shooting was reported in her area, broadcast outlets used a yearbook-quality headshot of a white student involved, but published a "gritty" image of a black student from a social media post. The young woman felt the visuals perpetuated imbalance and racial stereotypes.

In response, Pitts said, "Mainstream media has never been fair to people of color, but it has gotten better than when I was your age. It's improved, but it's still troubling."

He said change comes when "different groups get more economic power," and said that there needs to be more diversity among media ownership to help drive the conversation of diversity in content.

"The job of a journalist is to give voice to people like me," said Pitts.

That said, he said there's "never been a better time to be a journalist" or to effect that kind of change, as the national and international communities grow more diverse, as grassroots movements continue to push for equality across all demographics, and there's a greater demand from the public for facts, truth and transparency.