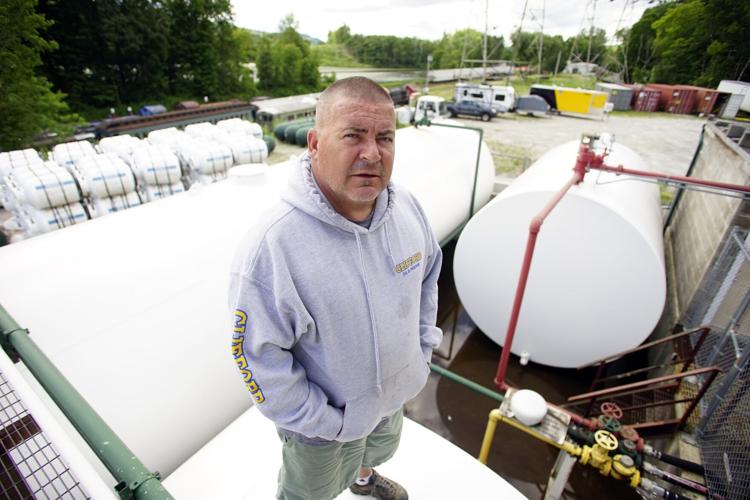 Jeff Clifford, owner of Clifford Oil in Lenox Dale, stands on a supply of heating oil. Homeowners and oil retailers face uncertainty about prices heading into the next winter. 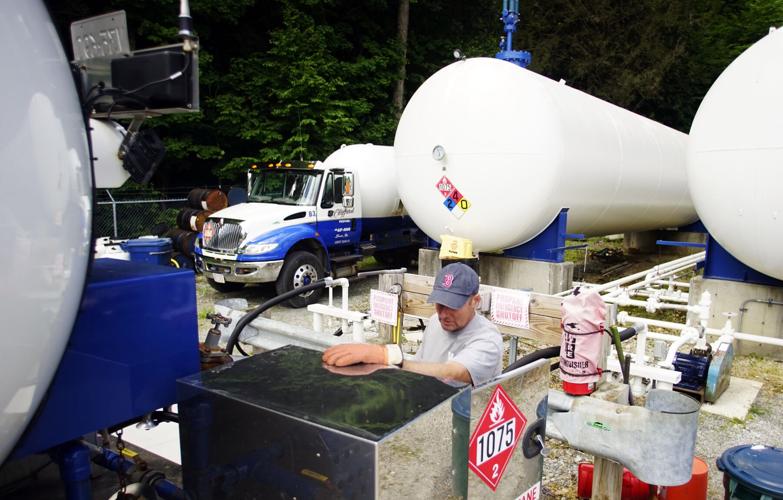 The yard at Clifford Oil and Propane in Lenox Dale.

The recent doubling of heating oil prices has local homeowners, energy retailers and fuel-assistance programs concerned about the rising cost of the fuel.

The price spike has local energy suppliers putting on hold pre-pay contracts in case the price drops by the fall, the start of the heating season. The increases have impacted Berkshire households seeking fuel assistance money.

"My main concern is for the 1,320 seniors who are either going to freeze or blast their heat and run out of money."

According to the Massachusetts Department of Energy Resources, the average cost of heating oil has risen in a year’s time from $2.85/gallon to $5.89/gallon — a 106.7 percent increase. For those looking to lock into a price for next winter, the cost has nearly doubled to $5.49/gallon compared to last fall when it was around $2.80 gallon, several local oil retailers tell The Eagle.

“Our customers don’t blame us and they understand the situation, but they are very concerned,” said Claudine Preite, co-owner of Preite Oil Co. in North Adams. “Many of our customers are taking minimal delivery right now and not filling their tanks.”

Jeff Clifford, a fifth-generation owner of Clifford Oil and Propane in Lenox Dale, says he and his customers weren’t prepared for a huge increase.

“We knew there would be an increase, but not the kind of spike we’ve seen. The president did warn us prices would go up through speculation on the market,” he said, referring to President Joe Biden.

Some heating oil suppliers in the Berkshires declined to comment on the price hikes. Others did not respond to inquiries from The Eagle.

Biden and energy experts point to the embargo on Russian oil as one reason for the price increase, but a rise was already in the works, according to Michael Ferrante, president of the Massachusetts Energy Marketers Association, a trade group.

“We live in a global economy and we had a problem before the war in Ukraine, such as the country and the rest of the world emerging from COVID, driving up the demand,” he said. “You go to bed at night and wake up the next day and prices are even higher. Shocking.”

Homeowners who qualify for and receive fuel assistance are among those hardest hit by rising fuel prices.

The Berkshire Community Action Council administers the federally funded Low Income Heating Energy Assistance Program. Tammy Biagini, director of the local LIHEAP, says of the 8,000 households the group serves in Berkshire County, roughly 2,500 heat with oil — and more than half are senior citizens.

“My main concern is for the 1,320 seniors who are either going to freeze or blast their heat and run out of money. Many used up their LIHEAP benefits by February,” she said.

LIHEAP runs from Nov.1 through April 30 with a maximum benefit per household of $2,350. Biagini says the overall LIHEAP funding through BCAC this heating season is close to $9 million. She could not say, on average, how much more LIHEAP recipients paid beyond their benefits.

“With oil at $6.80 a gallon by the end of the program, households were having trouble making ends meet,” she said.

“We had a lot of people who couldn’t keep up with their electric bills and we managed to prevent between 300-400 service shut-offs.”

Biagini noted that anyone who applied for fuel assistance and was denied due to lack of documentation, income or other criteria has until July 11 to appeal to the BCAC if their financial situation has changed.

With the start of a new heating season three months away, many homeowners will consider plans to lock into a price only if the cost comes down.

“I don’t feel comfortable offering people now a locked in price,” said Clifford, of Clifford Oil and Propane. “I can see the price coming down but it’s too early based on the stock market’s future speculation of oil prices.”

As for switching heating fuel sources, Ferrante says with natural gas prices also on the rise, it does not make financial sense.

What might help homeowners, according to Ferrante, is spreading out the cost of heating oil over a 12-month period.

“I talked to one retailer who put his customers on a budget plan, paying a fixed monthly average price based on typical usage during a 12-month period,” he said.

Ferrante said now is a good time to ensure a homeowner’s furnace is working properly.

“In addition to working with local retailers on payment, tune up your heating system or replace that old furnace with a new, more fuel efficient one,” he said.

Beset with staffing issues, Sweatland-Payless Oil, whose roots date back almost 100 years, is closing this week.