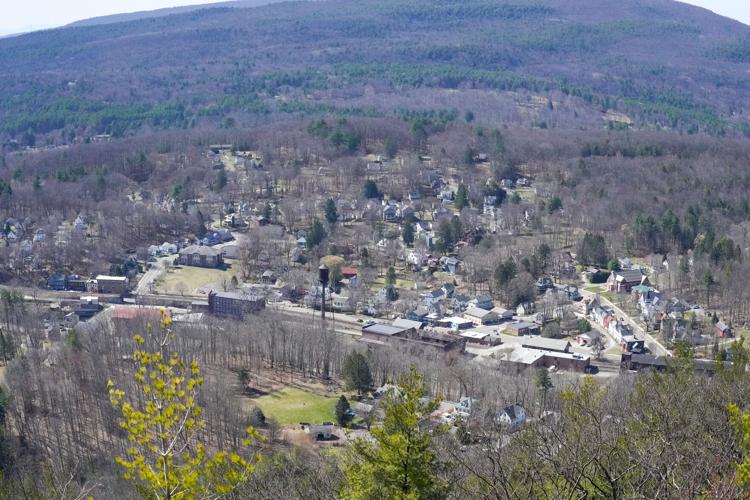 The view of Housatonic from Flag Rock. The small town, sitting between Stockbridge and Great Barrington, is home to what many locals call “tremendous assets.” 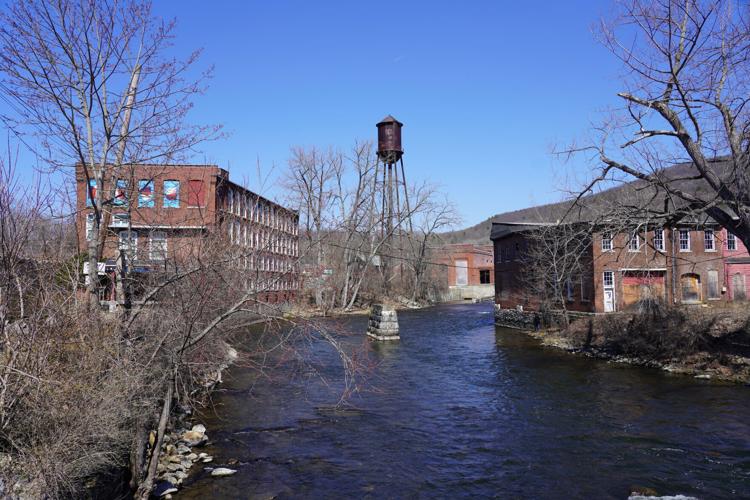 The village of Housatonic sits alongside a stretch of the Housatonic River. 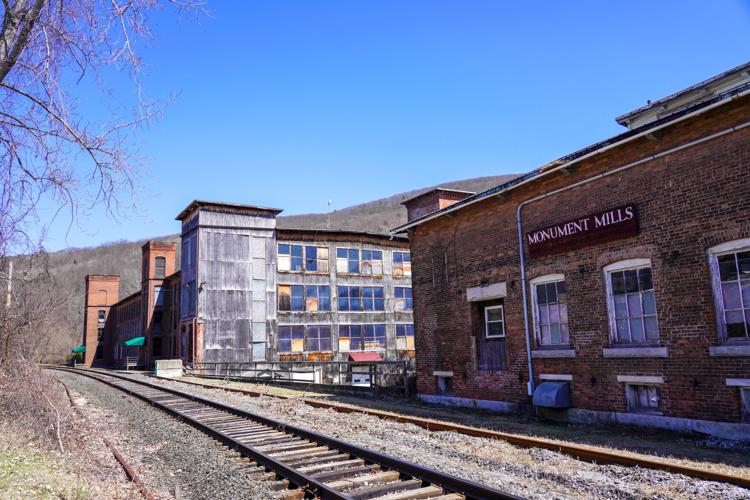 The Monument Mills complex, which once employed hundreds of people, remains the village’s largest eyesores. 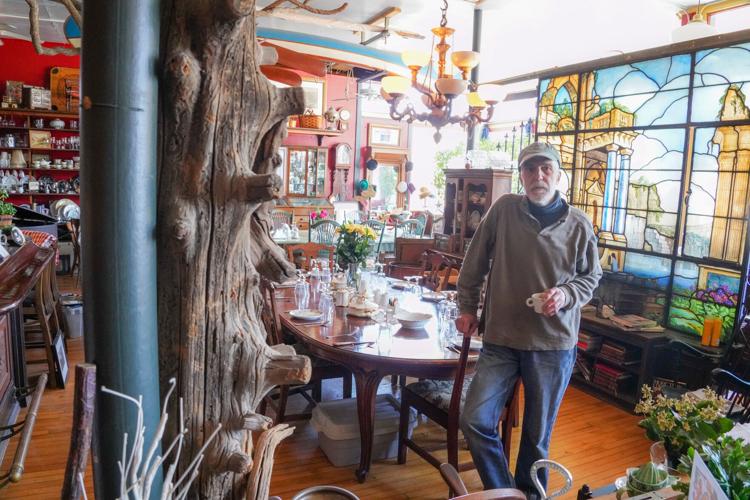 “God, if we can get people to come to Housatonic — it’s here,” says Craig Bero, the owner of one of the Berkshires’ most inspired eateries, Pleasant and Main. 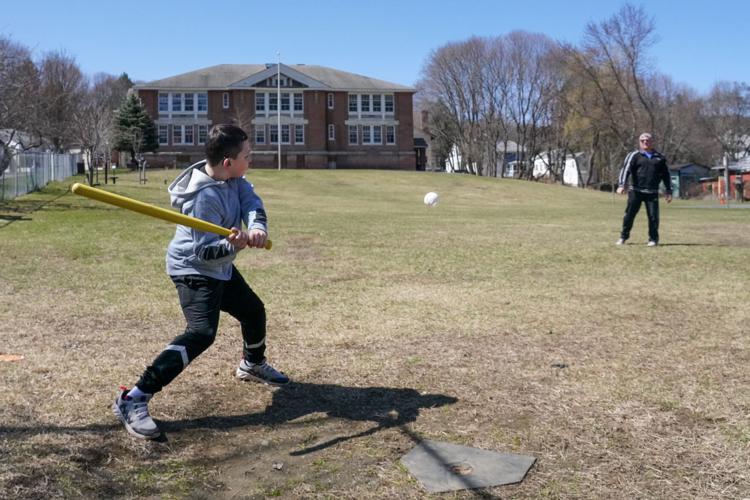 Housatonic’s abandoned former elementary school sits in the center of the village between a playground and the indoor recreation center known as the Housy Dome. 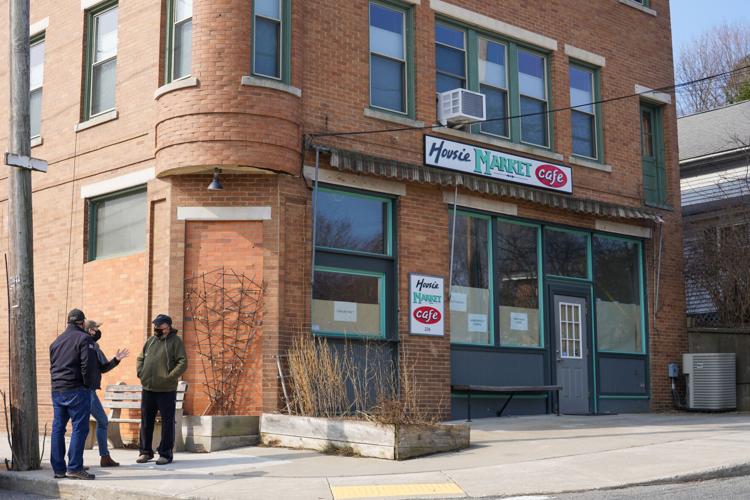 Patrick Hollenbeck, owner of the former Housie Market, talks with Michelle and Bruce Loubert of nearby Division Street. “This place is special. It’s the people,” says Hollenbeck. “This is like the Brooklyn of the Berkshires.” 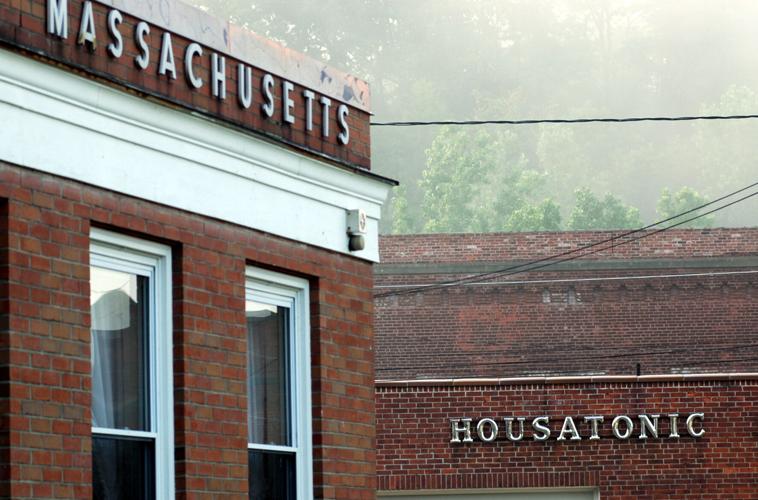 The post office (left) and the Housatonic fire station (right) combine as central sources of support for Housatonic. 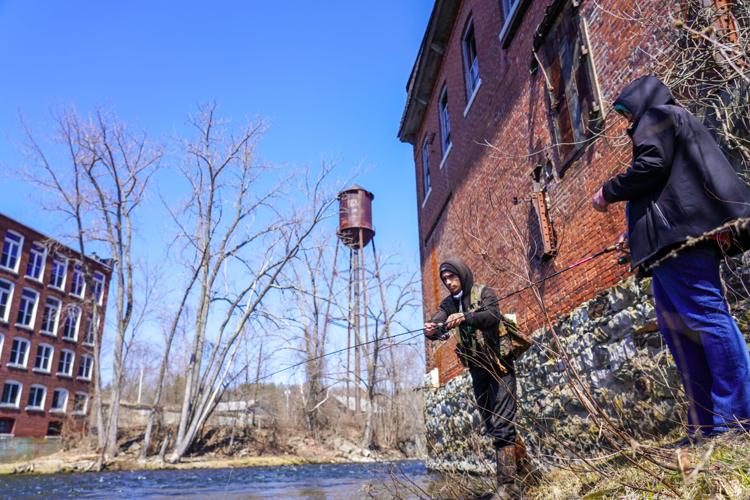 Dylan Johnson (left) and Alexa Baylis fish for trout along the Housatonic River in downtown Housatonic. 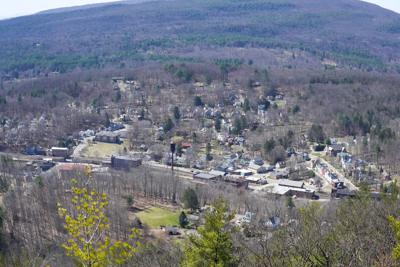 Months before the pandemic hit last year, villagers of Housatonic noticed the new signs taped to the windows of the shuttered commercial space that once housed the Housie Market, the former backbone of the community.

For the culturally astute — and Housatonic, a village of Great Barrington, is filled with them — these words were familiar, taken from the musical “West Side Story,” famous for its themes about tough living, complicated affections, miscalculations, beauty and heartbreak.

Most of the 700 or so souls who call this village home know these themes well.

Set between stately Stockbridge to the north and the increasingly exclusive downtown Great Barrington to the south, Housatonic had been given a technical “slum or blight” designation several years ago by the Massachusetts Department of Housing and Community.

As surrounding Berkshire towns continued to flourish from a decades-long run as destination points for tourists, second homeowners and those otherwise escaping the duller pursuits of the lower lands, Housatonic’s dishonorable designation felt less like a mark of shame than a statement of baffling facts that, taken in larger context, didn’t quite add up.

After all, look at the place. Arranged in proper order along the banks of a particularly spirited stretch of the Housatonic River, the village — Great Barrington’s northern precinct — holds what many frustrated townspeople term “tremendous assets.” That includes comparatively affordable housing, walkable streets, hiking trails, majestic old architecture, and not a single chain store within binocular view.

Framed to the west by Tom Ball Mountain and to the east by Monument Mountain’s mighty derriere, known locally as Flag Rock, humble Housatonic cannot help but to measure itself first against its towering surroundings to the east and west rather than the monied inhabitants to its north and south.

Roiling past the bruised brick, the river itself eventually slackens its sinews just north of the old Rising Paper Mill, as if rubber-necking to catch a glimpse of the village’s resident celebrity: a magnificent American Bald Eagle that dwells along the banks there in a nest the size of a kiddie pool. Beak clinched like a bent nail, the barrel-chested bird of prey conducts its errands above it all, stiff-winged and a bit jerky on the turns.

From high atop Flag Rock, you can see twice daily the pug-nosed Housatonic Railroad train thump through town like a feral cat on padded paws. Down below, the train shakes the village’s old fieldstone foundations, and then everything goes quiet once again.

Too quiet, for many.

“We need some vitality — that would be my wish,” says Helen Kuziemko, a town hall retiree who lives on Kirk Street in the home her husband, Matthew, grew up in.

“It’s simmering. There’s just a lot of untapped opportunities in Housatonic,” says Ellen Lahr of Pine Street, who raised two sons in the village and appreciates that Housatonic remains a place where the well off and those of middle and meager means coexist “and you can’t always discern the difference.”

Suzie Fowle, a former member of the Great Barrington Planning Board and an 18-year resident of Kirk Street, expresses her frustration in the form of a question: “Why have the potential opportunities remained ‘potential’ for so many decades?”

This village of former mills that once employed more than 500 people, most of whom lived within walking distance to work, was steadily discharged of its industrial purpose beginning more than six decades ago. The five-and-dime is long gone, as are the tiny taverns and family-run shops.

It’s safe to say most residents today cherish Housatonic while also allowing their minds to run on idle revelry for what could be.

A decade ago, the idle revelry revved into overdrive when a Miami developer, Stephen Muss, swooped into town presenting artist renderings of a riverside village center that included a river walk, pedestrian bridges, an amphitheater, specialty market, culinary school, office spaces, an inn, residential housing, galleries, and other manna from heaven. For various reasons, most of them acrimonious, he packed up his drawings and left, leaving behind a single renovated mill building off Park Street that’s now in private use.

And so we go back to the former Housie Market, its windows still wrapped in anticipatory brown paper. As people begin to emerge from the pandemic, as the peepers this spring call like a chorus of loose leather fan belts in this village originally woven together by a united phalanx of textile looms, people cannot help but to remark upon the aged and sun-stained signs of things to come that haven’t yet come.

Turns out, a noodle eatery had intended to move into the former market. Those plans fell apart. Then, the pandemic came. The space remains vacant. Villagers can be forgiven for viewing those signs on the windows with a mixture of ambivalence and contempt.

After all, just up Pleasant Street a hundred yards or so is the dilapidated building that once housed Housatonic’s grammar school, shuttered 18 years ago. Some residents want the building removed and the land incorporated into a traditional town common, maybe with a bandstand. Others say razing the building would be an offense against the village’s social and architectural heritage. The only solid plans are decidedly drearisome: The town-owned building’s broken windows will soon to be boarded up and its leaking roof tarped over, a stopgap to slow nature’s takeover of the site.

Just to the north and across the tracks, the gargantuan former Monument Mills complex — 400,000-plus square feet — sits mostly unused and mostly dilapidated. When contacted by phone this week, Whitmore “Nick” Kelley, who has owned the property since the early 1980s, said he has no plans for the site.

“We’re waiting to get through this COVID situation and see how things unfold,” he said.

Just across the river, on Park Street, the former Cook’s Garage — a 15,000-square-foot brick building — too, sits abandoned and succumbing to gravity and the elements. The town took it over four years ago when the former owner couldn’t keep up with tax payments. The town is conducting an environmental assessment there in preparation for an eventual public discussion on what happens next.

If Housatonic feels it’s being held back, it’s not because local regulatory agencies stand in the way. Indeed, revitalizing the village is part of Great Barrington’s master plan. The town recently rezoned the area around the mills to allow for mixed-use redevelopment.

“The town is working to set the stage for redevelopment, but we can’t force the private sector to act,” says Chris Rembold, Great Barrington’s town planner. “All we can do is try to address the foundational things, the basic obstacles, and hope someone sees the assets and opportunities of a place.”

That said, there are some indications the long-secreted village is no longer a secret. During the pandemic, home sales have skyrocketed throughout the region, including here. For example, a 1,043-square-foot home on Kirk Street recently sold for $350,000. The original list price was $295,000. A real estate agency set up shop just last month on Park Street in a long-abandoned building.

“If a house goes on the market, it gets gobbled up,” says Tom Norton, who lives in the village’s western woods in a home he built on land his grandparents once owned. Norton leads the village’s annual spring cleanup of streets. His window trim is fashioned from repurposed planks ripped from the old Rising Paper Mill. He worries less about the lack of village vitality than he does a “takeover” by house flippers cashing in.

Around the corner, at John’s Garage, they still pump your gas and couldn’t be any nicer about it. On Depot Street, the package store Aberdale’s recently sold to Saanvi Liquor, Inc., which runs the Spirit Shop in Williamstown. For the time being, Aberdale’s is still Aberdale’s, which means you can still purchase Polish sausage.

Up on Main Street, Will Schillinger has converted a former Methodist church into a musical sanctuary, Pilot Recording Studios. Down the street from him is arguably the Berkshires’ most imaginative eateries, Craig Bero’s Pleasant and Main. If you order take-out from Bero, he plates it on his own eclectic mix of china. If you fail to return the china, Bero doesn’t lose a minute of sleep.

Pleasant and Main, stuffed with books, old bottles, antiques, and whatever else Bero feels like stuffing it with, is located in the former Snyder & Race hardware store. The first thing Bero did before opening his eatery a few years ago was to go to the nearby cemetery, find the gravestones etched with Snyders and Races, and pay due respect. Then he got cooking.

He keeps canoes on hand and some 50 fishing rods in the front parlor. You want to go fishing? Here, he’ll lend you the equipment and tell you where to go.

“This is what Housatonic is,” says Bero, who grew up in Wisconsin, in a town that he says is a carbon copy of Housatonic. “Look at this environment. Look up at Flag Rock, that old Native American ceremonial spot. It’s staggering what’s here.”

Further up Main Street, the town is finally installing a sidewalk connecting Route 41 to the village.

And speaking of sidewalks, Patrick Hollenbeck was standing upon the sidewalk in front of the former Housie Market last Sunday and talking about things to come. On a whim, Hollenbeck, a musician and president of the Board of Library Trustees who lives just around the corner, purchased the former market for $126,000 at a foreclosure auction in 2018 to protect it from “scumbags” who might have opened a pot shop there.

He said inquiries about renting the space have “reached kind of a feverish pitch.” He expects to have something to announce by June.

“I want people to be happy about this,” said the man responsible for those signs that borrow from “West Side Story.”

Coming straight from his mouth, it doesn’t sound like a bunch of song and dance.

Felix Carroll lives in Housatonic. He can be reached at felixcarroll5@gmail.com.