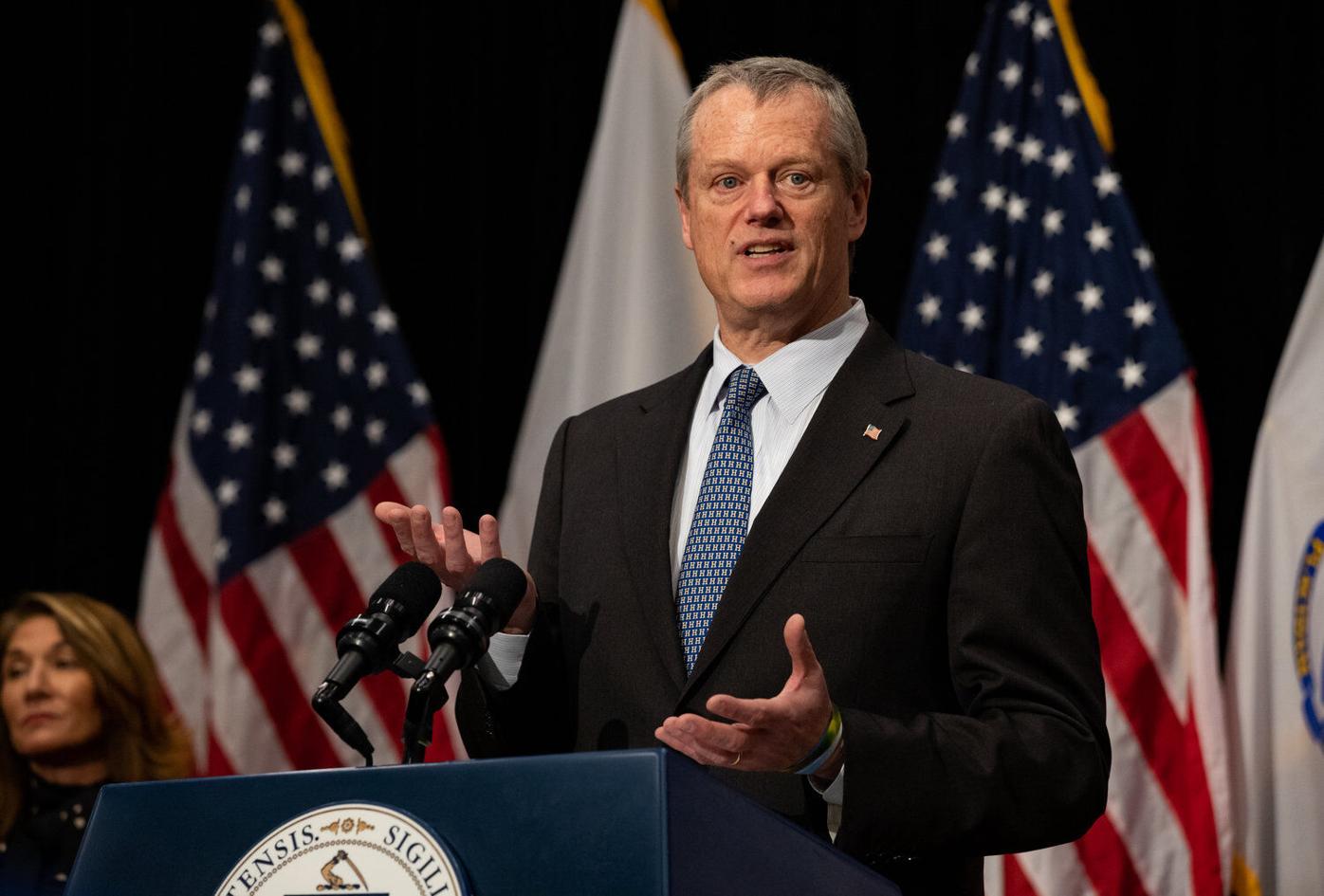 "Today we lay out a roadmap to reopening Massachusetts while we continue to fight COVID-19," Gov. Charlie Baker said Monday morning. "These two will be inseparable." 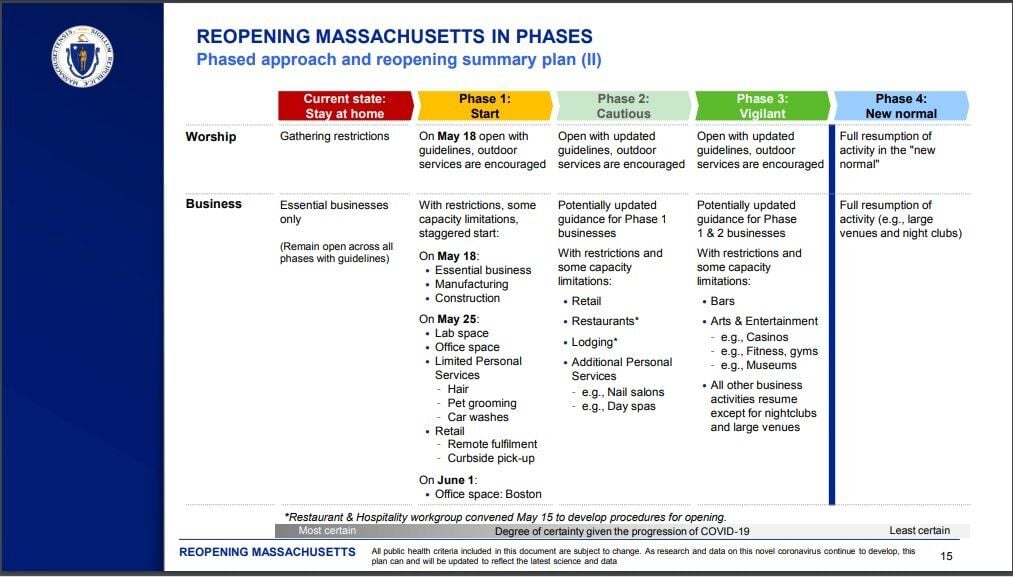 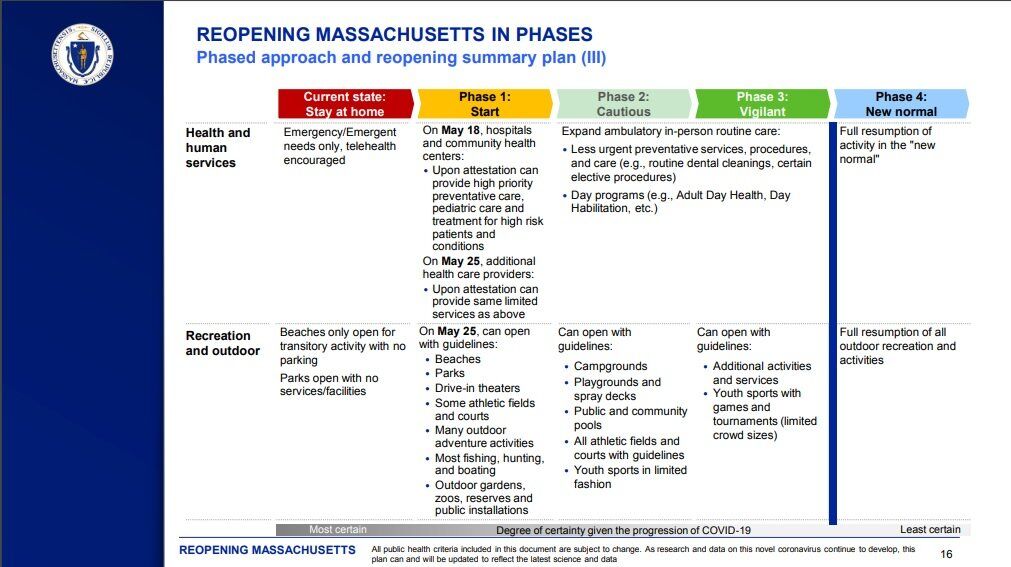 "Today we lay out a roadmap to reopening Massachusetts while we continue to fight COVID-19," Gov. Charlie Baker said Monday morning. "These two will be inseparable."

BOSTON — After two months of government-imposed business closures and restrictions on day-to-day life, Massachusetts entered a new phase of the coronavirus pandemic Monday — one that will attempt to balance public health efforts to keep the spread of the highly contagious coronavirus in check with a methodical return to economic and social activity.

The COVID-19 pandemic has already extracted a cruel toll from Massachusetts, in terms of both human life and economic security. Since the virus was first recognized here on Feb. 1, it has sickened more than 86,000 residents and has claimed the lives of 5,800. The measures taken to control the spread of the virus contributed to skyrocketing unemployment and threaten to cause some "nonessential" businesses to fold.

The plan rolled out by Gov. Charlie Baker on Monday sets the stage for a plodding return to normalcy and details how residents might return to their daily lives while the risk of picking up a dangerous pathogen remains a fact of life.

"People need to understand that we're playing this game, and it's a real one, with the virus and the economy at the same time," Gov. Charlie Baker said Monday, using his hands to demonstrate weighing two sides of a scale. "And it's really important for people to step up and recognize and understand that this game is not over."

The plan begins with a subtle change. The state's stay-at-home advisory is changing to a "safer at home" advisory, which encourages residents to stay home unless they're engaged in one of the state's allowed activities. State government is also continuing to urge employers to let their employees work remotely to limit the number of people in an office and on public transportation.

Businesses that had been deemed "nonessential" will begin to reopen in four phases, with at least three weeks between phases. House of religious worship, manufacturing and construction — much of which has continued throughout the pandemic as an essential service — are allowed to reopen immediately under industry-specific guidelines, and other phase one businesses like laboratories, traditional office spaces, personal services like hair salons, pet grooming, car washes and curbside pickup retail will be authorized to open on May 25.

Phase two will include traditional retail business, nail salons, day spas, lodging and restaurants, though Lt. Gov. Karyn Polito said Monday that the administration formed a new "restaurant, accommodations and tourism work group consisting of industry representatives and municipal leaders" that will develop specific safety guidelines that restaurants, hotels and others will have to follow when they're given the green light to reopen.

The plan also does not directly address a major barrier to returning to work: child care.

With schools and child care centers closed, and the status of summer camps in question, many workers would be unable to return to the office without having someone able to take care of their children. Polito said the state is developing guidelines for child care centers and that Boston Children's Hospital will review them before the administration rolls them out.

Meanwhile, the Department of Elementary and Secondary Education is working on a plan for a return to the classroom, and Polito said the emergency child care centers set up for frontline health care and other essential workers are operating at 35 percent of capacity, and will be open to accept more children.

"This is something no one's ever done before, shutter then reopen everything from a beachfront to a factory floor with standards in place to slow the spread of a highly contagious virus. So I ask everyone to keep this in mind, this guidance asked people to change behaviors and it changes the way some of our favorite places look and feel," Baker said. "This is not permanent. At some point, there will be treatments and ultimately a vaccine. But for the foreseeable future, everyone needs to continue to do the right things to bring the fight to the virus so that we can continue to move forward."

The difficulty inherent in balancing public health and economic activity during a pandemic was highlighted in a social media post from Rep. Jon Santiago on Monday morning. An emergency department doctor at Boston Medical Center, Santiago said his hospital has seen "significant improvement" in the number of patients being treated for COVID-19 in recent weeks, but questioned whether the situation has improved enough to restart the economy.

[cqembed title="Untitled" content="PHAgIHN0eWxlPSIgICBtYXJnaW46IDEycHggYXV0byA2cHggYXV0bzsgICBmb250LWZhbWlseTogSGVsdmV0aWNhLEFyaWFsLFNhbnMtc2VyaWY7ICAgZm9udC1zdHlsZTogbm9ybWFsOyAgIGZvbnQtdmFyaWFudDogbm9ybWFsOyAgIGZvbnQtd2VpZ2h0OiBub3JtYWw7ICAgZm9udC1zaXplOiAxNHB4OyAgIGxpbmUtaGVpZ2h0OiBub3JtYWw7ICAgZm9udC1zaXplLWFkanVzdDogbm9uZTsgICBmb250LXN0cmV0Y2g6IG5vcm1hbDsgICAteC1zeXN0ZW0tZm9udDogbm9uZTsgICBkaXNwbGF5OiBibG9jazsiICAgPjxhIHRpdGxlPSJWaWV3IEZJTkFMX1Jlb3BlbmluZyBNYXNzYWNodXNldHRzXzUgMTggMjAgb24gU2NyaWJkIiBocmVmPSJodHRwczovL3d3dy5zY3JpYmQuY29tL2RvY3VtZW50LzQ2MjAxMTAxMS9GSU5BTC1SZW9wZW5pbmctTWFzc2FjaHVzZXR0cy01LTE4LTIwI2Zyb21fZW1iZWQiICBzdHlsZT0idGV4dC1kZWNvcmF0aW9uOiB1bmRlcmxpbmU7Ij5GSU5BTF9SZW9wZW5pbmcgTWFzc2FjaHVzZXQuLi48L2E+IGJ5IDxhIHRpdGxlPSJWaWV3IE5vYWggSG9mZmVuYmVyZydzIHByb2ZpbGUgb24gU2NyaWJkIiBocmVmPSJodHRwczovL3d3dy5zY3JpYmQuY29tL3VzZXIvNTA0MzUwMjE0L05vYWgtSG9mZmVuYmVyZyNmcm9tX2VtYmVkIiAgc3R5bGU9InRleHQtZGVjb3JhdGlvbjogdW5kZXJsaW5lOyI+Tm9haCBIb2ZmZW5iZXJnPC9hPiBvbiBTY3JpYmQ8L3A+PGlmcmFtZSBjbGFzcz0ic2NyaWJkX2lmcmFtZV9lbWJlZCIgdGl0bGU9IkZJTkFMX1Jlb3BlbmluZyBNYXNzYWNodXNldHRzXzUgMTggMjAiIHNyYz0iaHR0cHM6Ly93d3cuc2NyaWJkLmNvbS9lbWJlZHMvNDYyMDExMDExL2NvbnRlbnQ/c3RhcnRfcGFnZT0xJnZpZXdfbW9kZT1zY3JvbGwmYWNjZXNzX2tleT1rZXktTkxtV3BEWEFibDh2Z3Ztakh1UmIiIGRhdGEtYXV0by1oZWlnaHQ9InRydWUiIGRhdGEtYXNwZWN0LXJhdGlvPSIxLjc3OTA5MjcwMjE2OTYyNTIiIHNjcm9sbGluZz0ibm8iIHdpZHRoPSIxMDAlIiBoZWlnaHQ9IjYwMCIgZnJhbWVib3JkZXI9IjAiPjwvaWZyYW1lPg=="]"My concern is that we might have a second surge if we reopen up too quickly. And even in countries that have done a good job of controlling the epidemic — Germany, South Korea — they've seen outbreaks and second surges, and that's what we want to try to avoid here," he said as he finished the third of three overnight shifts in the "wicked busy" ER at BMC. "So we have to make sure that we set appropriate benchmarks and follow those. And I don't know if we're there yet."

Polito, who along with Economic Development Secretary Mike Kennealy led the state's reopening advisory group, said decisions about when and how to reopen businesses were made with public health squarely in mind.

"The way we decided how to open is to balance the public health and safety needs with the level of risk associated with that kind of business and that workplace, and to measure monitor and survey," she said. She added, "As we balance the shared goals of maintaining both public safety as well as activating our economy, we are faced with a new challenge of living with the virus. Our roadmap provides us with a plan and a direction point to get started."

Baker and Polito stressed that the same things that got the state to the point of being able to reopen some businesses — social distancing, frequent hand-washing, regular disinfection of surfaces, and wearing a mask or face covering when distancing is not practical — are here to stay.

"People need to do their part, employers and people at home," Polito said. "As you take on more activities, face covering, distancing and hand-washing are key to unlocking next phases of activity."

Initial reaction to the plan was mixed. Associated Industries of Massachusetts, the state's largest employer group and one of the most influential on Beacon Hill, said the plan strikes a balance between economic needs and public health realities, and called it a good first step.

"We realize that every employer in Massachusetts would love to hear that they can reopen immediately," said AIM President and CEO John Regan. "But we also acknowledge that a phased reopening balances the need to restart the economy with the need to manage a public health crisis that continues to claim 100 lives a day in Massachusetts."

But the state's major retail trade organization said it was "incredibly disappointed" with Baker's plan, calling Massachusetts "one of the most hostile states in the nation toward small retailers," and accusing the administration picking "winners and losers."

"While protecting public health is important and something we all support, it defies logic to declare that the opening of barber shops and hair salons is safe, while claiming opening small retail businesses is not," said Retailers Association of Massachusetts President Jon Hurst. "The same is true for the opening of churches and large office buildings. Having two or three people in a retail shop is every bit as safe, if not more safe, than the allowable businesses in phase one."

And the Massachusetts Fiscal Alliance said the plan "doesn't reflect the sense of urgency currently pervading the small business community."

"Today, if you're a billion-dollar business or a national retail chain; all is well. If you are a Massachusetts small business, you could be facing a continued shut down well into late July. The most vulnerable population in the governor's executive order are these businesses that will be continually forced into the red for over the next 100 days," spokesman Paul Craney said. "Many of our favorite retail stores, lodging facilities, restaurants, bars, gyms, and museums will simply go out of business."

From the left, Rep. Tami Gouveia tweeted that the administration's plan "is not only incredibly dangerous & irresponsible, it lacks real understanding of childcare needs of our working families. This foolish plan clearly shows the real priority of the board — $$$ and not the health of employees. Way to ignore PH experts & data!"

Baker acknowledged "the incredible amount of anxiety that comes with both ends of this picture" and said that the effort to safely reopen the economy and resume more normal activities "will hinge fundamentally on personal responsibility."

He said it's up to everyone in Massachusetts to continue to be vigilant about hand-washing, to adhere to the principles of social distancing, to stay home when feeling sick, and to wear a mask or face covering when in public.

Only by dealing directly with the virus and playing by the terms it dictates, he said, can Massachusetts successfully get back on its feet.

"I know we'd all prefer to believe that the virus is less serious now and that it's behind us. It's nice outside. I understand the weeks feel like months. I think we understand all of this. Collectively, we have flattened the curve and avoided the spike in cases that would have broken our health care system," he said. "But if we don't keep up the fight, and don't do the things that we all know we have to do and know we can do, we run the risk of creating a second spike in the fall."