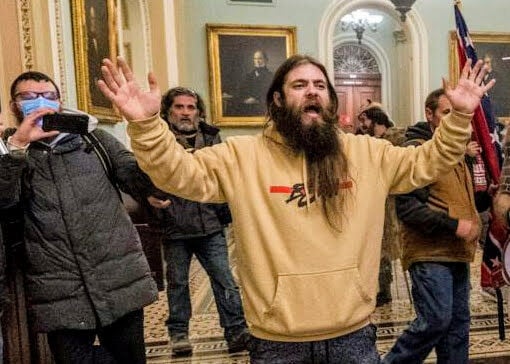 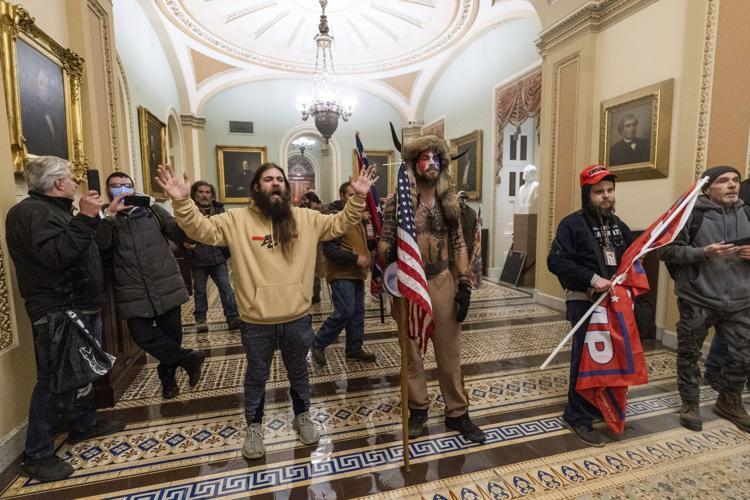 The attorney representing Brian P. McCreary, of North Adams, at left wearing a blue mask while holding a cellphone, says that McCreary is sorry for his involvement in the events at the U.S. Capitol in Washington on Jan. 6 that shook the nation. McCreary has struck a plea deal with prosecutors who agreed to drop felony charges in exchange for pleading guilty to a misdemeanor offense. 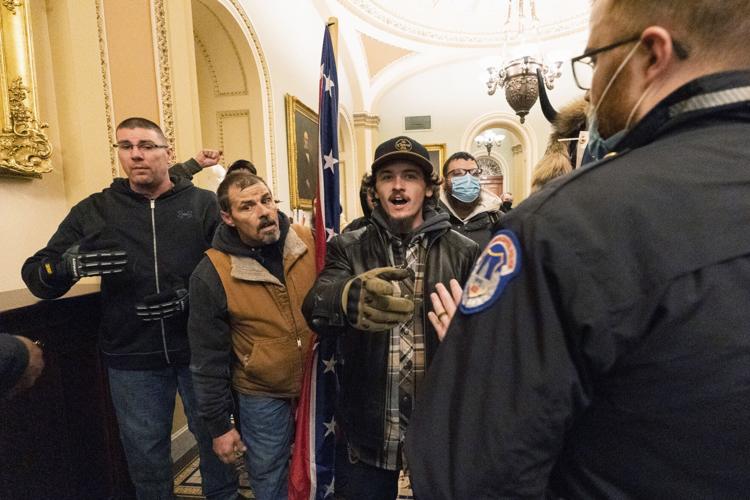 Brian P. McCreary, center-right and wearing a mask, hopes that his effort to document violent behavior inside the U.S. Capitol on Jan. 6 will aid his legal defense, after being arrested by the FBI.

He wanted to document, not riot.

The North Adams man arrested Thursday for entering the U.S. Capitol “without lawful authority” Jan. 6 says he got caught up in the moment when a crowd at the White House walked to the seat of Congress, morphing into a mob along the way, and temporarily halted ratification of the presidential election results.

— Brian P. McCreary, of North Adams, who has been charged with being unlawfully inside the U.S. Capitol on Jan. 6

“My story is of, for the most part, a bystander, being in the wrong place at the right time,” Brian P. McCreary told The Eagle in an email, in response to questions about his arrest and his presence at the scene of the insurrection, which led to a second impeachment of former President Donald Trump and quickened a national debate about the resiliency of American democracy.

McCreary, 33, says he felt called to document what rioters were doing inside the Capitol. Once he reached the Capitol from the White House, McCreary acknowledged in interviews with the FBI, he entered the building. Once inside, McCreary began shooting video on his cellphone in an effort to provide witness to the violence being committed by his political fellow-travelers, he told The Eagle.

“I found myself suddenly surrounded by individuals who were equipped to break into the Capitol building … and immediately began recording them in action. I followed these people inside the Capitol while continually recording various moments,” he said.

McCreary said he shared what he recorded with authorities within hours. “By 1:30 a.m. on Jan 7th — all my clips were uploaded to the FBI … and I effectively turned myself in as being present in the building,” he said.

McCreary says he was spurred by the mayhem he saw, as well as his professed love of country, to try to help hold people to account. “I turned in what I had because it is evidence of individuals who were destructive. Evidence of individuals attempting to incite others into destructive action. Both inside and outside the Capitol building. It was the right thing to do.”

In a narrative released Thursday, the FBI said McCreary had failed to heed instructions to stay out of the Capitol, where violent clashes between rioters and police resulted in several deaths on the grounds. McCreary told investigators he was nearby when a police officer shot a woman who had been part of a mob trying to break through a door leading to the floor of the U.S. Senate.

McCreary said he initially was unaware that it was unlawful to be inside the Capitol. According to the FBI, McCreary told investigators that, once in, he was with a group that was confronted by a police officer. He told the FBI that he remained in the building, moving with the group, but later decided to leave the Capitol.

In the process of that, he was stopped by an officer, the FBI said Thursday, who asked whether he was a member of the press — and demanded that he produce a form of media identification.

“McCreary provided his driver’s license, stated he was not a member of the press and was ordered to leave the building,” the FBI said in court papers.

But, the government alleges that he went back inside, despite knowing it was illegal to do so. The charge: “Knowingly entering or remaining in any restricted building or grounds without lawful authority.”

“McCreary left the building and then admitted to re-entering the U.S. Capitol through a different door that was kicked in just moments before he re-entered,” the FBI said. The agency says that, in its interview with McCreary, he admitted to that. He says that is accurate.

McCreary said in emails to The Eagle on Friday that he was mistaken to think he could go back in without facing consequences. 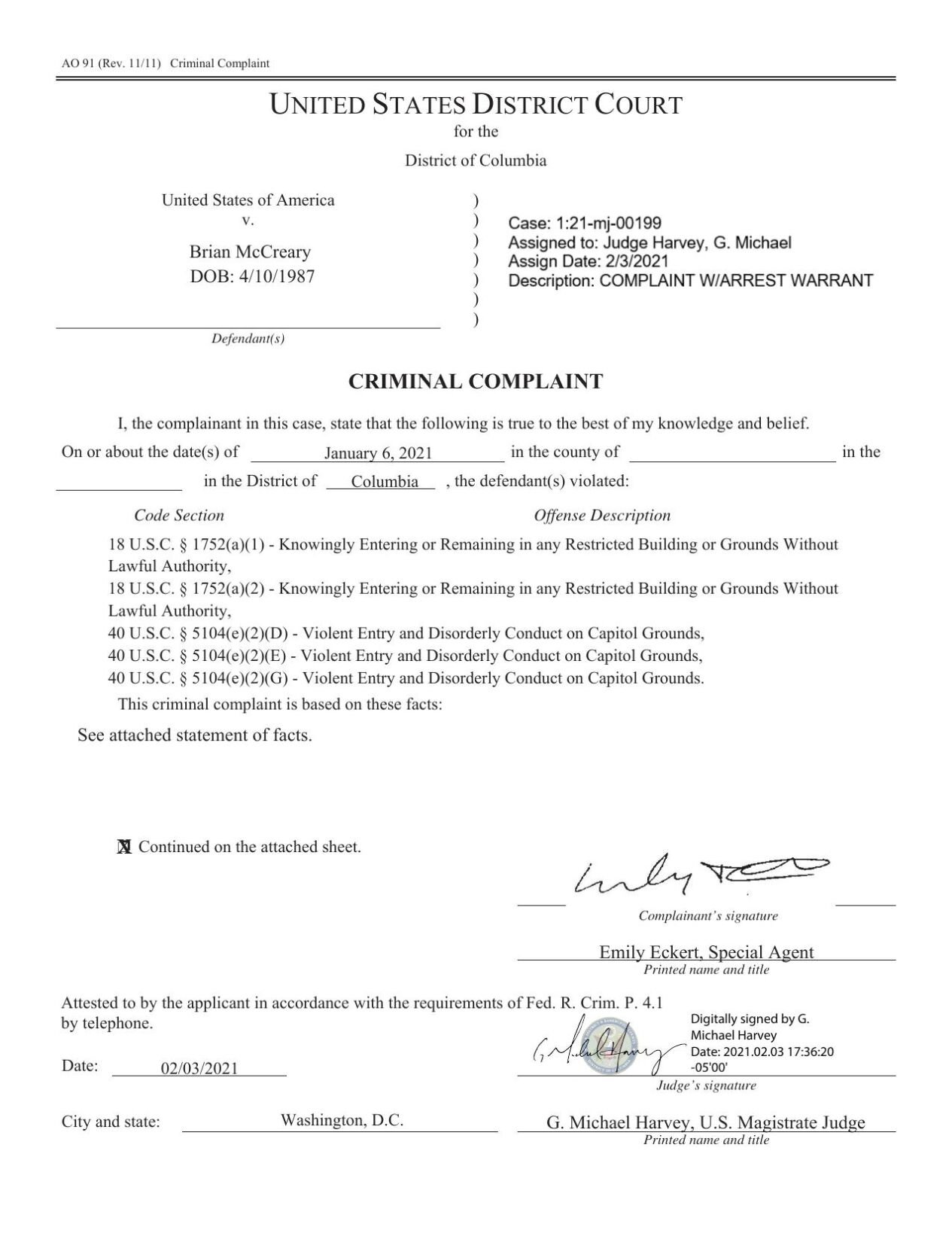 “At the time, I had no idea it was illegal simply being in the building,” he wrote. “Even so I would turn over these clips regardless ... as they depict people who rightfully deserve punishments.”

The government says McCreary told investigators he tried to be a moderating influence inside the Capitol as he observed and recorded violence.

“McCreary stated he directed people inside the building not to harm police officers or commit any acts of violence. McCreary further stated that he understood going into the building ‘might not have been legal’ but ‘he made a personal choice at that point,’” the FBI said.

McCreary admits he did go back in. After leaving initially, he says, he used his phone to take outdoor crowd shots, including of people singing on stairs leading up to the building. Then, wanting to get a higher perspective of the crowd, he says, he went up stairs on the left side of the building. While there, a door was broken open by rioters. He said he was amazed.

“A moment of ‘Are you kidding me?’” he said. He entered the building again and kept recording events on his phone.

“I did not know being inside was illegal — at the time. It is much different when handed papers depicting which law to look up. Being instructed to ‘leave’ is not the same as being told, ‘Leave,’ and by the way, being inside is illegal.”

McCreary said that he believes there are shadings to his presence inside the Capitol on the day of the insurrection. Nonetheless, he said he will accept the legal consequences for what he did.

He also is charged with three counts of “violent entry and disorderly conduct on Capitol grounds,” according to a complaint filed by FBI Special Agent Emily Eckert.

“Like any situation, there is much nuance [in the] events surrounding Jan. 6,” he told The Eagle. “I have and will continue to fully cooperate with officers working on this case. I love our country and will accept the judgment passed from our judiciary system.”

Unlike the majority of those who entered the Capitol, McCreary does not think Trump won. But, he had questions about the November vote. He says he attended the Jan. 6 rally because he believed then, and now, that the integrity of the voting process warranted further review.

“I went to D.C. to support the idea behind having audits. In no way to support an ‘insurrection,’ or that Trump was the ‘rightful’ winner of the election. Just audits,” he said.

“The results afterwards would have been an undisputed, settled matter,” he said. “I do believe — still — that there were plenty of examples of fraudulent … activity surrounding the November election.”

And yet, he said he does not believe that a “widespread conspiracy or coordination” influenced the outcome. “Rather, individuals acting as individuals,” McCreary said. “I can’t help but believe that fraud is similar to cockroaches. If we see one, there are probably 100 we did not see.”

He added, “I believe we as a country set a dangerous precedent in the 2020 election cycle. One that makes it OK for fraudulent activity to take place. That we as people do not have the right to question results or demand audits of our elected officials. That our government does not have to hand over evidence to the people.”

North Adams man who was part of the Jan. 6 insurrection gets 3 years probation

A North Adams man who was part of the mob that stormed the U.S. Capitol in January 2021 was sentenced last week to three years probation.