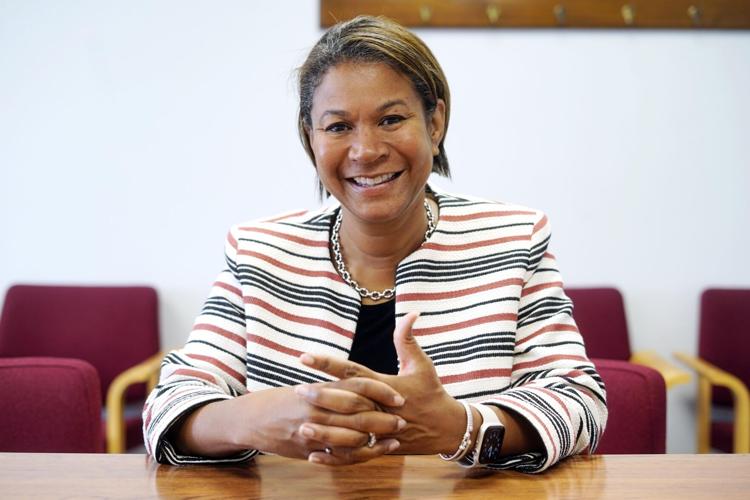 Kimberly S. Budd, chief justice of the Massachusetts Supreme Judicial Court, made a stop in Pittsfield on Thursday as part of a series of visits to jurisdictions across the state. 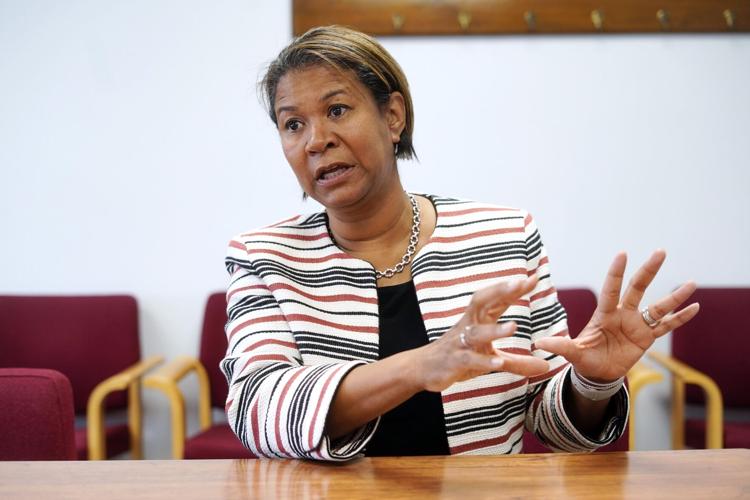 Kimberly S. Budd, chief justice of the Massachusetts Supreme Judicial Court, speaks Thursday during an interview with The Eagle. "Because of COVID, we now have remote hearings," she said. "People are able to handle things by email, which courts weren't wanting to do before."

PITTSFIELD — Local officials and civic leaders Thursday were paid a visit by Kimberly Budd, the chief justice of the Massachusetts Supreme Judicial Court.

Budd was appointed chief justice by Gov. Charlie Baker months into the pandemic, in 2020, when she became the youngest chief justice of the high court in the past 150 years and the first Black woman to lead it.

The pandemic changed so much about how courts function, with hearings and arguments conducted online, as lawyers and their clients convene remotely.

Pandemic-permitting, Budd is now for the first time as chief justice traveling the state to meet the people who keep the courthouses running in a series of statewide visits.

Budd, who previously sat on the Superior Court bench, made her first stop in Pittsfield, home to the state's westernmost constellation of courthouses. She met with civic leaders, as well as judges and court and probation officials from district, superior, juvenile and probate court.

The Eagle sat down with Budd, and conducted a Q & A that has been lightly edited for length and clarity.

Q: In your conversations with court personnel today, have you heard of any regional disparities in terms of assets available here in Berkshire County versus the eastern part of the state? And if so, what can be done to ameliorate that spread?

A: I know that there's this belief that people out west don't have the same pull or don't get the same attention. And I hope that's not true — that's part of the reason I'm here. And I think that people understand that. We just had the elections. This is part of the state, and we're here to hear you. I know that it's definitely something that comes up, and, you know, I'm thinking about judges. You guys are going to be looking for a new judge for Superior Court to replace Judge [John] Agostini (who is retiring from the bench next year) and hopefully, there will be some candidates from out here who can, you know, sit here and be a stable presence. But, as I was telling some lawyers, you going to have to beat the bushes and find people to apply, you know? Because you're not going to be a judge unless you apply.

Q: Can you explain your job to readers?

A: I am the chief of the Supreme Judicial Court, the highest court in the state. And we have on the court, there's seven altogether. So there's one chief and and six associate justices. And according to statute, the SJC has oversight over the court system. In our court, we hear appeals that come up through the system. Usually the cases that we hear are about issues that have never been considered before, and they've never been decided, and they're usually pretty interesting. We also hear all first-degree murders — that's just part of what we do.

In addition to that, as chief, I have to make sure that the court system is running OK, that everybody's doing OK. That was tough during COVID, because everybody was under so much stress. I really have to just credit all of our court personnel, who made it possible for us to continue to do the work that the court needed to do, because there are people who, you know, crime didn't stop, you know, issues with families didn't stop. And so people need it to be able to use the courts. And I'm really proud of all of our judges, our clerks, our court officers, and probation officers, everybody hung in there and they were able to do whatever it took to make sure that we could continue to provide services. I can't take credit for that. It's all the people across the system, across the state, who made sure that that happened.

Q: What do you see as some of the enduring impacts of COVID-19 on the way the judiciary functions?

A: It's interesting, because I feel like the law and the courts are kind of staid, and you know, they don't like to move too much or too fast. And COVID required us to pivot. And I'm not sure that that would have happened without COVID. Or, it would have taken a long, long time. But because of COVID, we now have remote hearings. People are able to handle things by email, which courts weren't wanting to do before. And so now that we can do things remotely, people have a little bit more leeway, more flexibility. The people who may have had trouble getting to courthouses can have their hearing over zoom. Lawyers who have, you know, a hearing here in this courthouse and a hearing, you know, out there in this courthouse can potentially do one or both of those remotely. During COVID, we had our oral arguments remotely. And it worked. It worked. So that's one silver lining. Right now, we're just trying to figure out which of these things will we continue to do. What makes sense? And we've sent out surveys to all the members of the Bar to find out what they thought, within their practice and the courts that they go to, what would work for them. So we'll take all that information and start to figure out what the rules are going to be going forward.

Q: Is there an opinion that you've written that you think is kind of the most interesting or thought provoking?

A: Writing these opinions, it's a really big project, much bigger than you might expect. Because what you want to do, what I want to do, my whole philosophy is, I want to make sure first of all, obviously, that I've gotten the law right. But I want to make sure that people who are reading it, even if they weren't part of the case, and perhaps even if they're not a lawyer, will understand what I'm saying. So that's not as easy as you think. You know what the answer is, but you have to get there in a way that people can follow. And what I strive for is to have somebody finish reading it and say, "Oh, yeah, well, that makes sense."

So there was one case early on. It was Commonwealth vs. Rosario, and it was a defendant who had been convicted of multiple counts of second-degree murder. He was accused of having thrown a Molotov cocktail into an apartment building where the residents there died. He moved for a new trial in Superior Court. And the Superior Court judge looked at the situation and saw that this guy was not an English speaker, but was interrogated in English; that he was drunk at the time and going through alcohol withdrawal; and that the incident happened in the '80s. At the time the motion for a new trial came up, there was a change in fire science, and as it turns out, they've got those flashovers, so that if there's a sudden burst of oxygen in the room, or if a door opens, the fire can flashover. The point was, this wasn't necessarily a Molotov cocktail, there were other things that could have happened.

So [the Superior Court judge] put together her decision and said, I'm going to allow for a new trial. The Commonwealth appealed and it was it was heard at the SJC and I was assigned the case. Prior to that the law about new trials was that you have to have one really good reason why you should get a new trial. But I was able to say, you know, here, there are multiple things that come together, that also should allow for a new trial. And so the guy was released, he was not retried, and this was after 20 years in prison. But that's now our rule.

Budd appeals for aid to pull judiciary into digital age

Q: How do you think your lived experience has impacted your perspective as a jurist?

A: As a Black woman, I have a different experience, obviously, than people who aren't Black women. I'm in the minority. I think that Black women are often underestimated and not necessarily seen. And so when I was in Superior Court, I felt good about being there, because when defendants would come up, and a lot of times they were black, and a lot of times we would be the only two people of color in the courtroom. So I felt good about being there, so that he could see me and perhaps feel like he was going to at least get a shot, you know, as opposed to seeing all white people in that room. And now being on the SJC. It's a privilege and, I feel like I have a responsibility as a Black woman to maybe point out the things that people might not otherwise know or think about, and those things are considered in with everything else. So I feel really good about being at the table to be able to share my experience, because I do think it makes a difference.