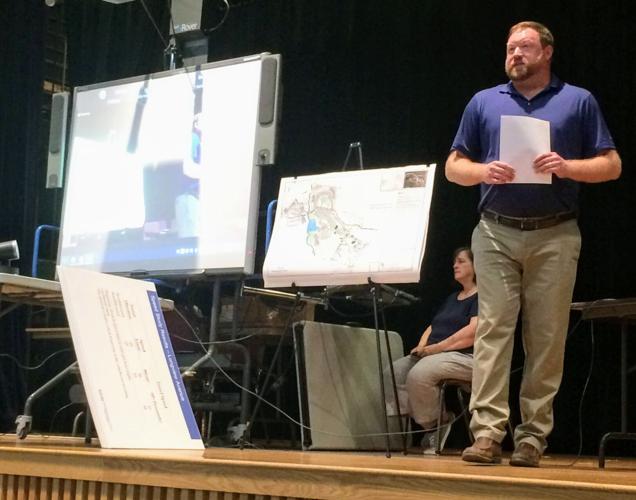 Brent M. White, a civil engineer with a Pittsfield firm, briefs an audience Wednesday on plans for a recreational vehicle park in Hinsdale. It would be built on the grounds of the current Camp Emerson, if granted a special permit and other needed approvals.

Representatives of Northgate Resort Ventures LLC, seated at right, listen to a presentation Wednesday about their proposed RV park in Hinsdale. The company’s general counsel, Chelsea Bossenbroek, is wearing a white shirt in the second row from right. Behind her sits Robert Graves, the town administrator. 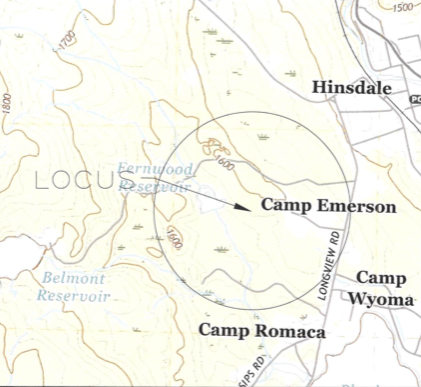 Northgate Resort Ventures LLC is proposing the remake Camp Emerson in Hinsdale into a travel destination able to accommodate 317 RVs, about 100 of which would be kept on the property and rented to visitors.

The people behind a major Hinsdale development say they can tuck 317 sites for RVs onto a summer camp property without messing up the neighborhood.

But Hinsdale officials had questions this week about traffic, water supplies, sewer use, environmental harm and whether an influx of visitors would be simply too much for nearby Plunkett Lake.

Ninety minutes of discussion Wednesday, in the regional middle school auditorium, kicked off official reviews of Northgate Resort Ventures LLC’s plan to remake Camp Emerson into one of its nearly two dozen RV parks in 13 states. Along with dozens gathered in person, others watched the proceedings by videoconference.

Much lies ahead. The public gets a chance to comment at the Planning Board’s next meeting in mid-August. The Select Board will take a recommendation from planners and later decide, after a formal public hearing, whether to grant Northgate a special permit.

The project will also need to secure a permit from the Environmental Protection Agency and may have to pass muster with the Massachusetts Environmental Policy Act office, according to Brent M. White, the principal and civil engineer with White Engineering of Pittsfield.

Locally, it will need to receive a wetlands review from the Hinsdale Conservation Commission. And, in a sobering moment during Wednesday’s discussion, Richard Scialabba, a top Hinsdale official, reminded White that he’s been advised that the town’s Zoning Board of Appeals may have to grant a variance.

That panel’s chair, Jeffrey Viner, told White and other Northgate representatives that an RV park is not allowed in the R5 zoning district in which Camp Emerson sits at 212 Longview Ave.

White, standing on the Nessacus Regional Middle School stage, told Scialabba he didn’t recall the caution about possibly needing a variance from the ZBA. And he told Viner that Northgate views the RV park as a continued use of a campground — and said the town’s zoning bylaw stance on RV parks is “not well defined.”

Over 90 minutes, Northgate representatives made the case that the RV park would not create traffic hazards or congestion, overwhelm the town’s sewer system or drain water resources. They said the RV sites would be placed at the middle and rear of the 155-acre property.

The current camp’s entry off Longview would be widened and positioned closer to the crest of a hill, to improve its visibility.

Chelsea Bossenbroek, Northgate’s general counsel, said her family-owned business knows what it’s doing. “We are very familiar with how to operate a campground,” she said.

In Hinsdale, she said the company would work to keep patrons busy within the site, without a lot of coming and going, and would instruct travelers to come to the property up Michaels Road off Route 8.

When asked whether Northgate would consider reducing the size of the project, Bossenbroek cited the need to make the venture work financially. “It models out really well,” she said of the proposed 317-site project.

Bossenbroek said that while some of the current camp’s more “rustic” bunkhouses will be removed, the project will seek to preserve elements. The camp boasts a central dining hall able to seat 400, built at a cost of a million dollars by the Lein family, as well as a heated swimming pool. “We don’t go in and just tear everything down,” she said.

Robert Michaud, managing principal of MDM Transportation Consultants, Inc., briefed the audience on how his firm reached the conclusion that the park would not overwhelm local roads. He said that while its analysis of current traffic and vehicle speeds was conducted in April, the numbers were revised upward to reflect summer travel as well as dips in volume attributed to the pandemic.

On Friday nights, Michaud said, Michaels Road and Longview Avenue would see an extra RV or car every minute on average, not “a platoon of vehicles charging to get up there.”

Michaud’s overview led an abutter to the property, James Sullivan, to push back.

“How are you going to handle all that extra road traffic?” he asked. “You’re changing the whole dynamic of that whole neighborhood with the traffic alone.”

A small group of Hinsdale residents have shaped a campaign to defeat the application, citing concerns similar to those voiced at Wednesday’s meeting.

Ray Bolduc, a Select Board member, told Michaud that the junction of Michaels Road and Route 8 may not be able to safely accommodate large vehicles. Traffic on Michaels Road would also pass the small lakefront property owned by Camp Emerson — and that site’s future use also prompted questions.

Bossenbroek acknowledged that the marina’s small size and limited parking posed “operational issues” for Northgate. The special permit application filed in June says the company had not decided on its use. “Parking is a huge concern,” Bossenbroek said. “We would definitely have to take a look at that and it would be extremely limited.”

Local officials sought to assure residents the town will take a hard look at the proposal. “The town is trying to do all the due diligence that is necessary,” said Scialabba, chair of both the Select and Planning boards.

“We want to be as open and transparent as possible,” said Robert Graves, the town administrator.

Graves said residents can comment on the project by sending emails to select.board@hinsdalema.gov. The materials received will be aggregated in posts to the Select Board’s page on the town website.

The next Planning Board meeting is scheduled for Aug. 16, but the date may change.