PITTSFIELD — State Sen. Adam Hinds is running for lieutenant governor and will announce his campaign at 9 a.m. Wednesday in front of Pittsfield City Hall. 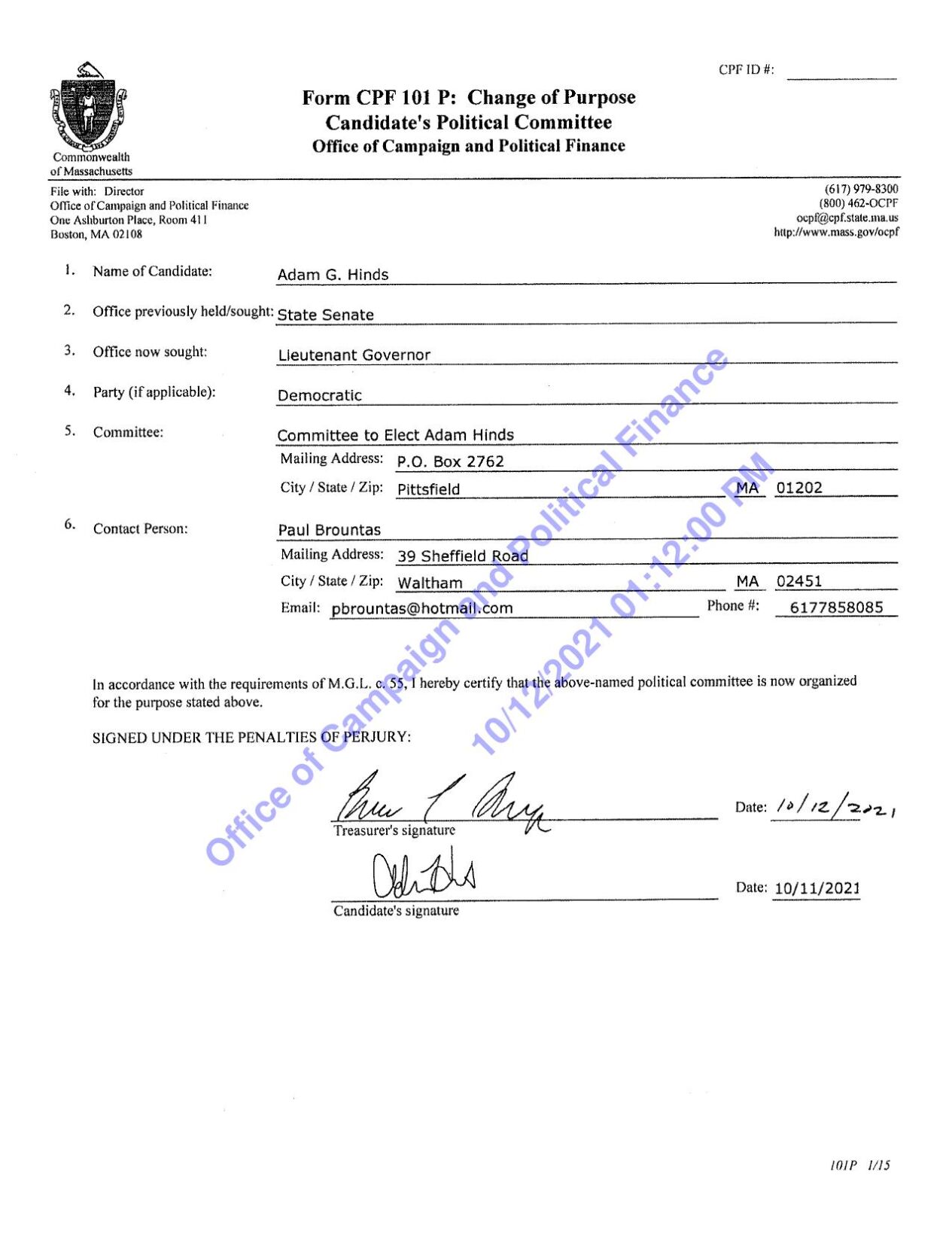 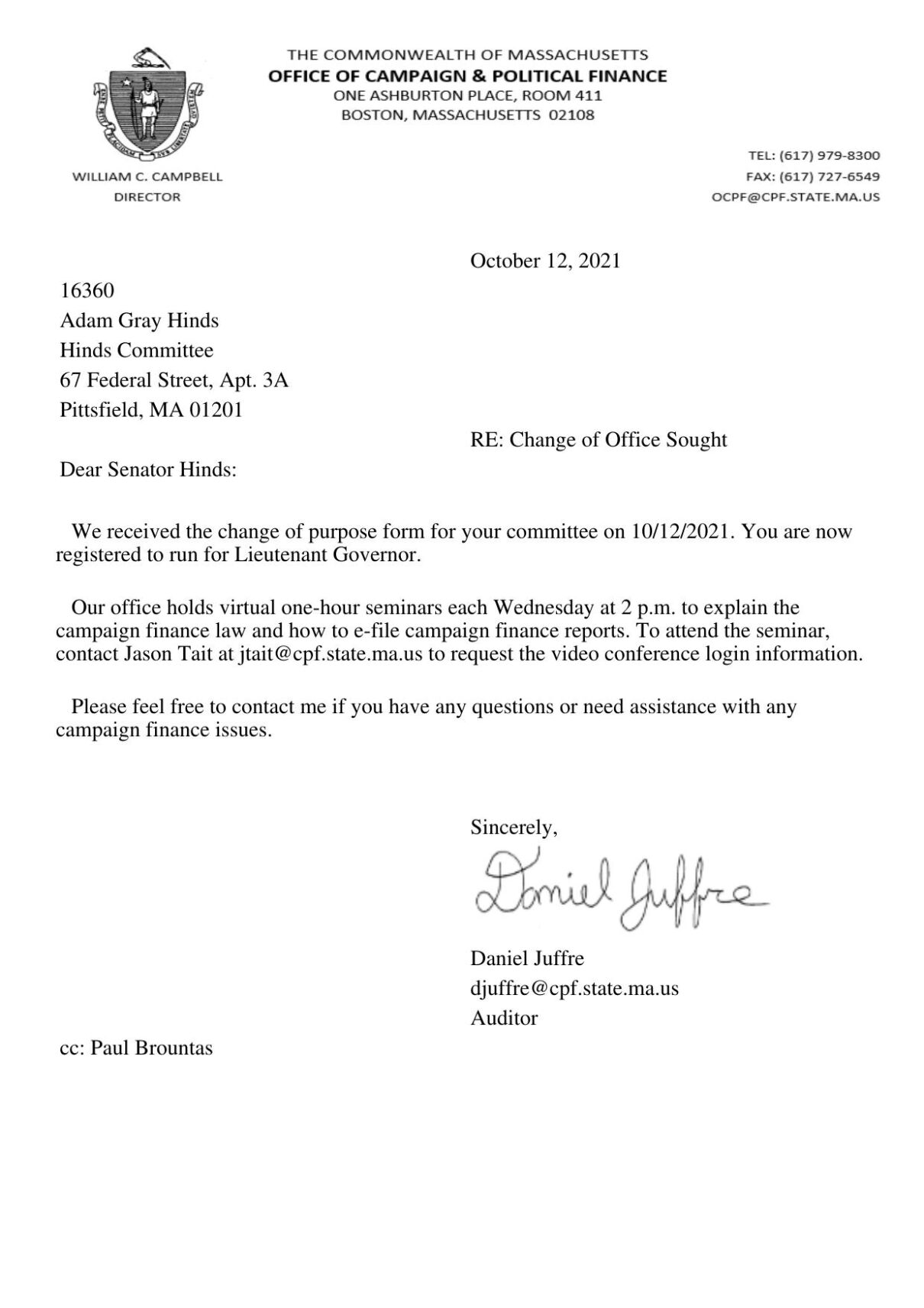 The Pittsfield Democrat said Tuesday evening that he is running “to make sure the office of the lieutenant governor plays a central role in rethinking our institutions and working to bring Massachusetts into the future.”

He lists rising housing costs, transportation challenges, climate change and child care accessibility and affordability among his top priorities in what he calls “a unique moment in history.”

“The pandemic has shown the greatest weaknesses but also highlighted some of our greatest strengths in the commonwealth,” Hinds said. “When you put together COVID-19 and the ongoing racial reckoning and economic downturn, they’ve uncovered so much that needs fixing.

“What I’m finding is a rare moment in policy-making when you have the will to do something, and it overlaps with the resources to make progress, in this case billions of dollars in federal assistance. I think this moment calls for big steps and for moving beyond.”

Later Wednesday, Hinds will travel to Springfield, where he will tour businesses and receive the endorsement of state Sen. Adam Gomez, D-Springfield, before heading to Boston.

Hinds’ website for the campaign, adamhinds.org, displays the slogan “bringing people together for progress.” In an announcement video, Hinds highlights his work in the Senate, where he chairs the Committee on Revenue and the Committee on Reimagining Massachusetts: Post-Pandemic Resiliency, as well as his work for the United Nations in the Middle East prior to joining the Senate.

Raised in Buckland, Hinds has led two Berkshire County nonprofits, Pittsfield Community Connection and the Northern Berkshire Community Coalition. He chose to announce his campaign in Pittsfield to show “there needs to be governing in every corner of Massachusetts,” Hinds said.

Hinds, who joined the Senate in 2017, has been linked with a statewide run since he purchased a house outside of his district in April.

State Rep. Tami Gouveia, D-Acton, is the only sitting lawmaker who has announced plans to seek the Democratic nomination for lieutenant governor. Bret Bero, a Boston businessman, and Scott Donohue, a Melrose resident, have also said they are running.

Hinds had nearly $174,000 in his campaign account at the end of September, while Gouveia reported just under $32,000.

Gov. Charlie Baker has yet to say whether he will pursue reelection, although three major Democrats have announced campaigns for governor. They include state Sen. Sonia Chang-Díaz, D-Boston, Harvard University professor Danielle Allen and clean energy executive Ben Downing, who held Hinds’ Senate seat from 2007 to 2016. Attorney General Maura Healey has said she will say this fall whether she plans to run for governor.

With Hinds vacating his seat, state Rep. Paul Mark, D-Peru, is expected to run. Brendan Phair, an independent from Pittsfield, also has said he is running for Senate.

Former state Sen. Andrea Nuciforo, D-Pittsfield, added $50,000 to his campaign account in August but said Tuesday evening that he chose not to run for his former seat. Professional and personal obligations, he said, persuaded him not to run in a large district, which would grow from 52 to 57 cities and towns under the proposal that the Legislature released Tuesday.