BECKET — The executive director of Jacob's Pillow said Wednesday that the dance venue will redouble efforts to ensure that the campus is safe from another fire, including upgrading its fire-suppression water pump system.

Pamela Tatge also said that the Pillow already has brought in experts to check every building and system for fire risks.

"This is a tragedy that has deeply shaken us," she told The Eagle about the total loss of the Doris Duke Theatre.

Tatge thanked firefighters and investigators for their hard work. 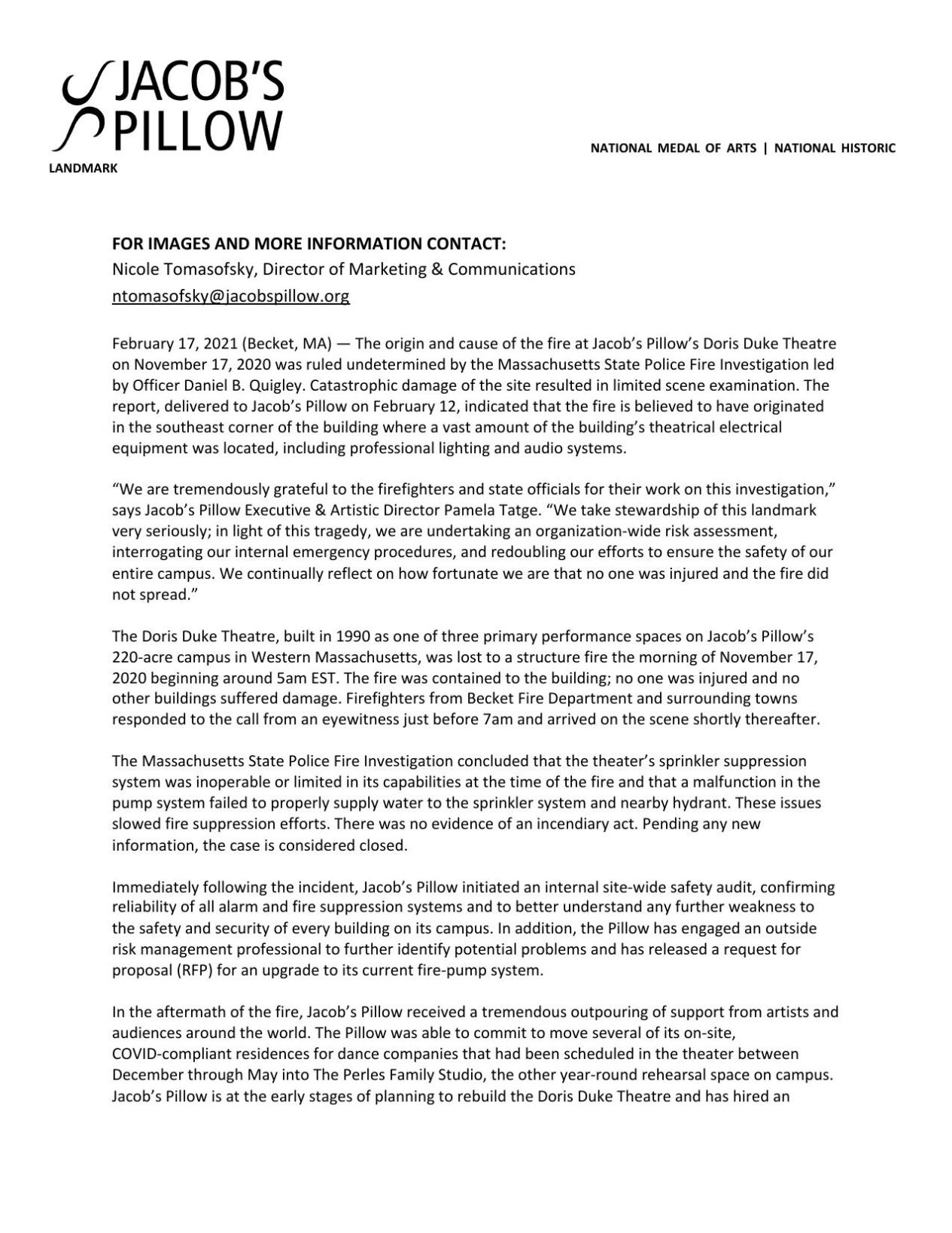 Her remarks come after state authorities Tuesday said damage from the Nov. 17 blaze that destroyed one of its beloved indoor stages made it impossible to pinpoint a cause with certainty.

The Pillow received the report Feb. 12.

State Fire Marshal Peter J. Ostroskey said the sources of ignition at the theater either were electronic equipment inside a door, or "smoking materials," like a burning cigarette.

The theater had a "vast amount of theatrical electrical equipment," Tatge said. This included lighting and audio systems.

The early-morning blaze drew a number of the county's fire crews, which struggled with hydrant and other water problems on the campus. As a result, the theater's sprinkler system did not activate.

Though the Pillow will receive an insurance reimbursement to rebuild, Tatge said fundraising will be necessary "for what we need the theater to be for the next century."

Pillow leaders have been listening to artists, audiences and others about a new theater that is modern but also has the intimacy and charm of the Doris Duke.

"The theater represented that intimate space where we could take risks and experiment in ways none of the other venues allow us to," she said.

The cost of a rebuild is unclear at present.

In April, the Pillow will announce its summer season, a socially distant festival that will take place outdoors.

"This will help people connect with the magnificence of the campus," she said.

BECKET — On Oct. 31, a local security firm monitoring the sprinkler and fire alarm system at Jacob’s Pillow called an employee at the dance ce…