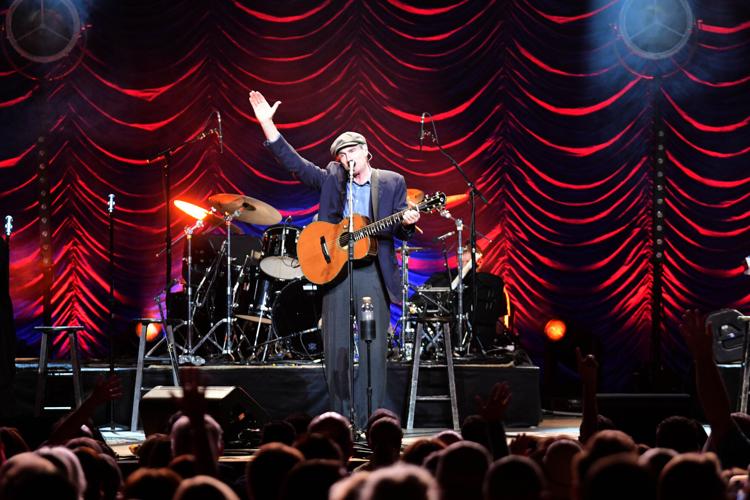 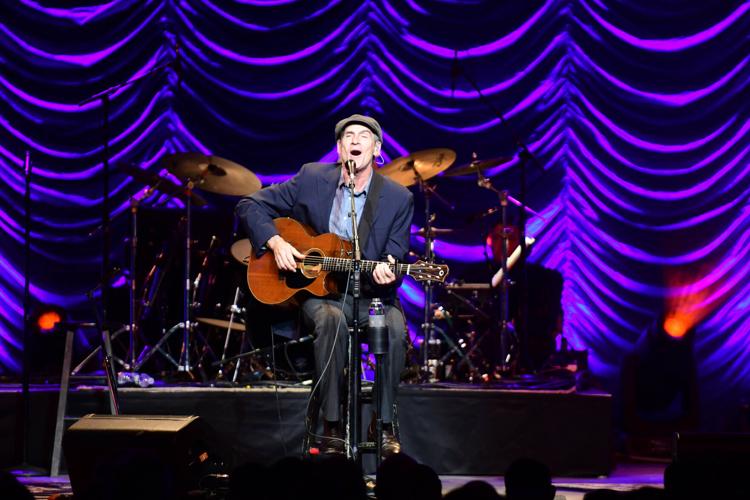 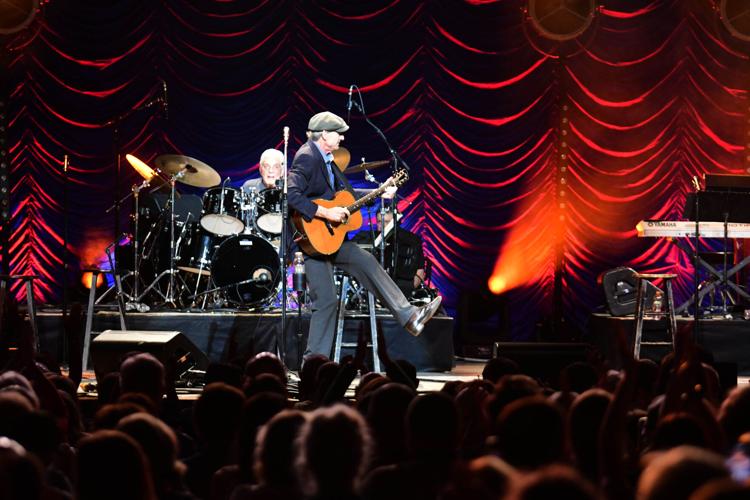 LENOX — When James Taylor, amped-up for his first hometown Tanglewood show since July 4, 2019, performed “Only One,” the 1985 classic resonated powerfully for the capacity crowd of 18,000 on a starry Sunday night.

“Don't be leaving me now, believe in me now,” his lyric pleads. Not that there’s any danger of irrelevance, as Taylor’s multi-generational appeal and durability remain unabated 54 years after his debut recording.

Wryly humorous as he chatted up the crowd, Taylor opened the evening with a greeting of “three times is the charm,” referring to COVID-postponed shows in 2020 and 2021 and noting that some patrons held tickets bought more than two years ago.

Several times, he inserted a tribute to the Boston Symphony’s summer home, notably in a raucous cover of Marvin Gaye’s “How Sweet It Is (To Be Loved By You),” the finale of the 21-song set (plus three encores) that delighted devotees during a generous 2½ hour performance on a perfect, cloud-free evening. (Incoming traffic flowed easily as picnickers streamed in gradually for the 5 p.m. gate opening).

At 74, doffing his signature cap from time to time as a gesture of appreciation to the audience that included multiple celebrities, JT’s energy level remains remarkable, a testament — at least in part — to clean living since he kicked drugs some 40 years ago.

Offering several rarities such as the title track from the 1985 album “That’s Why I’m Here” — written as a tribute to the comedian John Belushi, who was 33 when he died of heroin and cocaine intoxication — Taylor noted “it’s a wakeup call and pinpoints my own recovery from addiction.” He also assured the crowd that he has plenty of other songs for facing personal problems.

Many tunes performed during a powerhouse greatest-hits collection were healing and redemptive, such as “Shower the People” (with backup vocalist Arnold McCuller’s always-stunning, soaring descant), “Secret of Life,” “Carolina,” “You’ve Got a Friend,” “Sweet Baby James” (also known as “Stockbridge to Boston”), “Fire and Rain” and the final encore, “Close Your Eyes.”

There were also hard-rocking favorites, including “Copperline,” “Mexico,” “Steamroller,” and “Smiling Face,” that showcased his All-Star Band (no exaggeration, they are among the best in the business) and vocalists McCuller, Kate Markowitz, Dorian Holley and Andrea Zonn.

Sprinkled among the hits were more deep tracks — for example, “As Easy As Rolling Off a Log,” a whimsical number from JT’s recent album of jazz, Broadway and pop curios, “American Standard,” which came out the same week as COVID-19 emerged in March 2020 — “impeccable timing,” he observed.

The song, which Taylor pointed out has never been covered by anyone else, first appeared in the 1937 football film “Over the Goal” but gained wider fame in the 1938 Merrie Melodies cartoon “Katnip Kollege.”

It’s worth noting that most of his own classics benefited from high-energy re-arrangements and touchups that kept them sounding restored, refreshed and rejuvenated. There are always first-time listeners, of course, but many if not most in the audience never grow tired of these familiar reappearances on the set lists.

“It was and still is the soundtrack of our lives,” one listener offered. I suspect she was speaking for many in the crowd.

Tanglewood’s summer plans: A 10-week lineup of classical and popular artists, including a return for James Taylor

Regrettably, the high-intensity strobe light effects were visually jarring and the mix that favored the powerful band at times obscured the lyrics, which for this listener are as vital as the music.

On a sad note, demonstrating that COVID-19 remains a lurking menace, as much as we all wish it to fade away, the two other members of the Taylor Family Singers were missing. Son Henry was quarantined by a sudden-onset case, and wife Caroline “Kim” Taylor was home with him. Both had been scheduled to join in for at least half a dozen tunes.

“Knock on Wood,” a Taylor cover of Eddie Floyd’s 1979 hit, was a fitting second encore, a reminder of our good fortune that some of the pop artists of our youth are still active on stage.

Taylor’s July 4 show was a benefit for Tanglewood, as has been customary for many years — the $500,000 donation will be added to nearly $7 million in contributions to the BSO.

Obviously, we in the audience all got a friend up there on the stage. Clearly, the sentiment is mutual.