The Treasure Chest toy and game store opened in 1952 at 95 Dalton Ave. in Pittsfield. The building was modified with a notch in the roof to accommodate the stately elm tree in the front. 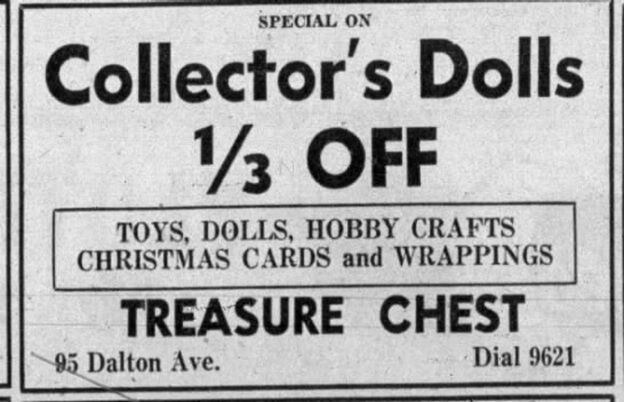 The Treasure Chest toy and game store had a wide variety of toys appealing to kids.

The Treasure Chest toy and game store opened in 1952 at 95 Dalton Ave. in Pittsfield. The building was modified with a notch in the roof to accommodate the stately elm tree in the front.

The Treasure Chest toy and game store had a wide variety of toys appealing to kids.

In the late 1940s and early 1950s, there were only a few stores in Pittsfield that would have a large assortment of toys, and these were mostly available just before the December holidays.

England Brothers Department Store had the best selection, located on the fourth floor, but after the holidays, the offerings were slim. Without a specialty toy store in Pittsfield, many of us got our exposure to the latest toys from the pages of the Sears, Roebuck & Co. or the Montgomery Ward holiday toy catalogs. The pictures of the latest and best toys were great, but these could not be found in the local market.

In 1952, the city got its first full-time baby boomer toy store when the Treasure Chest opened on Dalton Avenue in the Morningside neighborhood. This store had a full selection of children’s toys, games, books, records, party supplies and cards. The best thing was, it was stocked with top-notch toys all year round.

The owner was David “Dave” Congress, who had moved to the area from Long Island, where he had operated a design business. He and his wife, Edith, had spent summers in the Berkshires, appreciated the cultural offerings and thought Pittsfield would be a great place to both start a business venture and raise their three children.

Dave saw the need for a toy and gift shop in Pittsfield. He bought a house with a storefront at 95 Dalton Ave., where the family could live in the residential section and operate the business in the store. Before opening the Treasure Chest, the couple expanded the store 12 feet toward the street.

They also got local praise for saving a stately elm tree in the front by building the structure to the sides of the tree and putting a circular bench at the base. An expert at displays, Dave constructed a wooden treasure chest in front of the store with a revolving disc in the open box that advertised the business. The store was unique, with several rooms. My favorite was one dedicated to trains, cars and other motorized vehicles.

I remember my 10th birthday and the excitement when my folks took me to the Treasure Chest to let me pick my birthday gift. I must have walked around the store a dozen times eyeing and touching every game, play set, cars and trucks and other toy treasures on display.

I finally picked a beautiful 1954 Ford station wagon, about 8 or 9 inches long with an attached hand controller that held batteries. The red-and-black plastic-and-metal car could move back and forth, and a small steering wheel let the operator turn it left or right. This was a special present, as it was the same model as our family car.

Dave and Edith Congress were very involved in participating in community activities, chairing projects or committees for such organizations as the Pittsfield Community Music School, the Citizens Scholarship Foundation, Campfire Girls and the Holroyd Ballet School.

They frequently donated toys and games to local events and fundraisers. Dave continued his talents in creating displays for the United Fund, Winter Carnival and floats for the Fourth of July parades.

In 1957, in addition to the Treasure Chest and community projects, Dave opened up Congress Displays on Summer Street. This business took off, as many local businesses sought posters, signs or displays, and creativity was Dave’s forte.

Two years later, the couple closed the Treasure Chest and sold the building, thus, Pittsfield lost its only toy store at the time. The anticipated opening in a few months of the Zayre store was a consideration for closing the business.

This new chain store with a large discount toy section would be a difficult competitor. Both Zayre and the expansive Allendale Shopping Center adversely impacted several smaller Morningside businesses over the next few years.

Also, the success of his display enterprise became more than a full-time job for Dave. In 1969, the business became a division of the area’s largest marketing firm, Winard Advertising Agency, and was renamed Display Concepts.

Edith Congress died in 1974. Dave retired a few years later and, in 1980, he moved to New Jersey to live near his children and grandchildren. David Congress died in 1982, at 77. I will always remember him and my excitement when I got to shop at the Treasure Chest when I was a youngster.

Jim Shulman, a Pittsfield native living in Ohio, is the author of “Berkshire Memories: A Baby Boomer Looks Back at Growing Up in Pittsfield.” If you have a memory of a Berkshire baby boom landmark, business or event you’d like to share or read about, please write Jim at