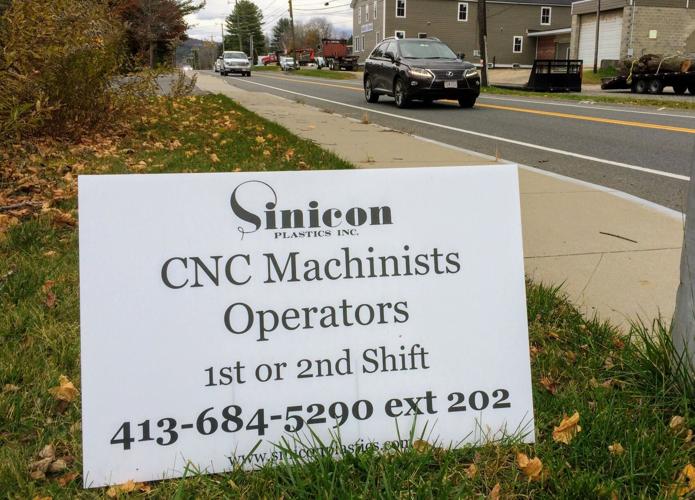 A routine sight across the Berkshires: Pleas for job applicants, as here at Sinicon Plastics in Dalton. 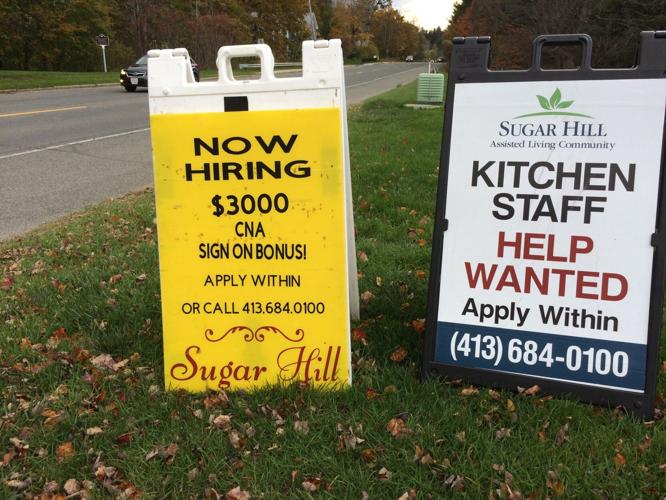 PITTSFIELD — What’s going on when the jobless rate falls? Often, it’s a sign of an improving economy, as increasing employment powers growth.

That’s not what’s going on in Berkshire County.

Sounds good, right? Not when you look at a few more numbers.

The state reports monthly on both the jobless rate for each county and the full civilian workforce, which includes people with jobs as well as those out of work.

These Pittsfield office jobs pay $23 to $30 an hour. They remain unfilled

A recap, since we’re talking about numbers: That’s nearly 2,000 fewer jobless folks from one year to the next in the Berkshires. But also fewer people holding jobs. So where did those unemployed workers go (or at least the total number of them)?

Simply out of the labor force, it seems: From one April to another, the civilian labor force shrank in Berkshire County by 2,062.

As a result, two years into the pandemic, Berkshire County employers still face a dramatic shortage of workers.

Heather Boulger, executive director of the MassHire Berkshire Workforce Board, estimates that there are two openings for every jobless worker in the region.

We spoke with Boulger to learn more.

Q: When, if ever, will this labor market get back to normal?

A: A whole lot has changed, even though the unemployment rate is pretty similar to what it was pre-pandemic. The biggest thing that I see from a workforce perspective is a drop in the number of people in the labor force in the Berkshires ... and it’s consistently been about 2,000 people under pre-pandemic levels. We’ve come to conclude that those 2,000 people are mostly people who have taken early retirement. People who were working and just decided to leave the workforce.

Q: What can be done to address that?

A: We’re doing everything in the MassHire system to rescale and retool people and get them back into the labor force. We have a highly competitive labor market right now, and a shortage of available workers. We have more than 3,500 jobs listed in the Berkshires on our state database. That’s huge. That’s double what it was pre-pandemic. There’s about two job openings for every unemployed worker.

It’s definitely a job seekers market. We have some unique challenges here in the Berkshires — with an aging population, a decline in population and an outmigration of the working-age population. And those factors all existed before the pandemic.

Q: What happened to all those people who moved into the Berkshires because it was seemingly safer here during the pandemic?

A: We’re still trying to collect data and information on those folks, but many people who permanently moved here, or resided in their second home here in the Berkshires, either were already retired, or they were doing remote work. Their company was allowing them to work from anywhere and they chose the beautiful Berkshires.

Q: Of all state counties, from March 2021 to March of this year, only Berkshire and Nantucket counties saw their workforce numbers fall. Surprise?

A: I’m not surprised. The Berkshires has the oldest of populations to begin with in Massachusetts.

Q: Are those missing 2,000 people just out of the workforce for good? They can’t be persuaded to come back?

A: More than likely, that’s true. But for those who might have retired early, as they start to use their retirement funding, they might come back in some type of part-time capacity, or in a consulting or gig capacity.

Q: Do you know of employers who are reaching out to retirees or people who want to work part time?

A: In Berkshire County, employers are resilient. They are pulling out every avenue possible. We’ve spoken to more than 700 companies this year so far. And we’ve heard most are struggling to find those skilled workers.

Many are trying to be as creative as they possibly can and are recruiting younger people. We’re hoping that our youth employment will get better and they’re starting to hire more 16- and 17-year-olds, even down to 14-year-olds for some of the work that can be done.

Q: How are area hospitality businesses coping with the need for summer workers? Historically, they’ve relied on visa programs to bring in foreign staff.

A: We need to figure out the whole immigration concern. That’s another huge population that the Berkshire has relied on. And that’s also hindering some of our leisure and hospitality sectors. They’re slowly gearing up, but it’s not like before. It’s probably a third of what it was before the pandemic.

A: Female workers have been greatly impacted during the pandemic, more than men, mainly because they are primary child care providers. There’s been a lot of child care organizations that have closed or downsized or don’t have the staffing. So a lot of female employees had to leave their employment to be able to care for their children.

We’re working with our education and training providers to try to create new opportunities for child care. So folks can actually end up returning to work and get trained to go into that industry sector.

Q: What’s the chance that people will come back into the workforce?

A: People are slowly returning, those that were sitting on the sidelines, who were afraid to go to work, or had compromised immune systems or who couldn’t find child care. They’re starting to trickle back into the workforce. The economy is crazy, but at least the workforce numbers are looking more favorable. We just need about 2,500 more people.

Q: What businesses are feeling the worker shortage most acutely?

A: Every industry is struggling, but especially health care, where you can’t work remotely. And our hospitality sectors. They’re struggling to find folks. Manufacturing companies are finding it hard to find skilled workers. Every industry sector has been hit by that.

"Yeah, we're baffled. We don't know where the people who want to work are."

During COVID-19, people had a chance to reevaluate what their priorities are personally. If they weren’t happy in their job, they jumped out — and hopefully switched to another career. But there’s people that just don’t want to work full time or are job hopping between companies.

Q: Last fall, when extended federal jobless benefits ran out, people thought that might be the nudge to get people back.

We don’t know where the people who want to work are. The Career Center [in Pittsfield] has been open for in-person business since January. People are not coming through the doors. We’re trying really hard to connect all the dots for job-seekers or companies.

We’re also trying to provide support for people who have been working right along — the people who are working two or three times what they normally do.

Is the hybrid work model here to stay in 2023? For many Berkshire businesses it is

The pandemic changed where people do their jobs. People who run Berkshires workplaces say the flexibility ushered in during a public health crisis is a permanent fixture. Here's why.