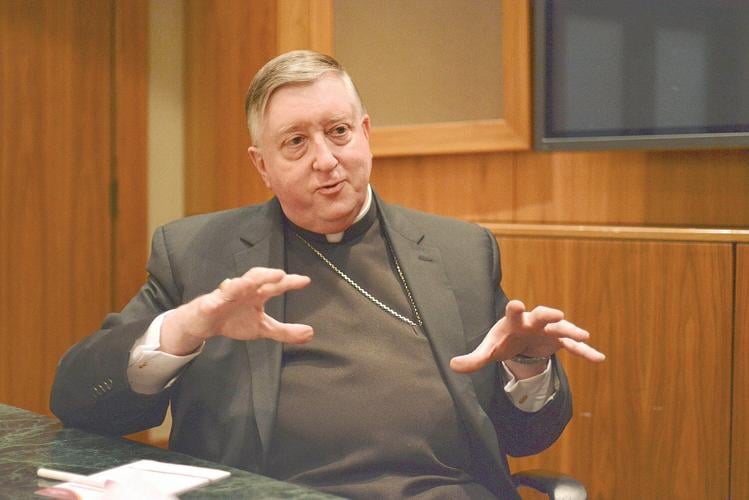 {caption}A Hampden Superior Court judge has denied motions to dismiss a lawsuit’s claims that former Bishop Mitchell T. Rozanski, pictured, now the archbishop of St. Louis, and others engaged in actions that compounded suffering by a survivor of sexual abuse committed by late Bishop Christopher J. Weldon and others.{/caption} 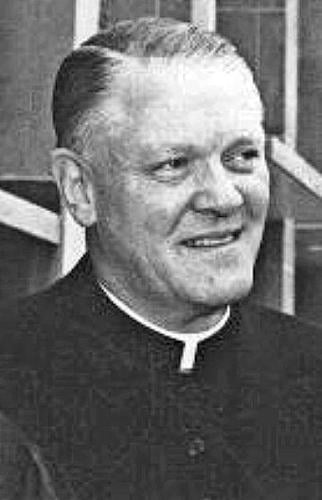 Sexual abuse committed by the late Bishop Christopher J. Weldon, who died in 1982, lies at the heart of a lawsuit that names a variety of current and former officials with the Roman Catholic Diocese of Springfield.

SPRINGFIELD — While the First Amendment protects “the free exercise” of religion, that does not shield the Springfield Diocese from claims that it tried to conceal sexual abuse by a late bishop, a Hampden Superior Court judge ruled this month.

As a result, a civil lawsuit filed in February ordinarily would proceed against the diocese and eight individual defendants, including the local church’s longtime lawyer and its former bishop, the Rev. Mitchell T. Rozanski.

But, the defendants say they plan to appeal the rejection of their motions to dismiss to the Massachusetts Appeals Court.

In her 13-page decision, Judge Karen L. Goodwin said the defense had misapplied case law in arguing that the complaint should be dismissed because civil courts lack jurisdiction over “doctrine, canon law, polity, discipline and ministerial relationships.”

In the suit, an unnamed Chicopee man says he repeatedly was raped by former Bishop Christopher J. Weldon and other priests in the early 1960s — a claim the church itself now accepts as true. Fifty years later, the plaintiff says, he was hurt again, when the church failed to respond properly to his reports of that abuse.

Along with Rozanski, the lawsuit names as defendants Patricia McManamy, Monsignor Christopher Connelly, Jeffrey Trant, John Hale, Kevin Murphy and Mark Dupont. The action also names as a defendant the legal entity known as the Roman Catholic Bishop of Springfield, a Corporation Sole.

Half of the lawsuit’s claims relate to how the diocese handled the man’s case when he came forward in 2014, after recovering his memory of the abuse, which occurred when he was an altar boy not yet 10 years old. The other half concerns the period of the abuse itself.

A year ago this week, a retired judge who investigated allegations against Weldon on behalf of the diocese found the Chicopee man’s claims of abuse, previously reported in The Eagle, to be “unequivocally credible.”

The lawsuit asserts that defendants displayed “deliberate indifference” to the abuse survivor’s needs that amounted, at times, to a civil conspiracy, as they worked to conceal and distort his claims.

In attempts to have the case dismissed, defense lawyers mounted arguments, in filings and in a hearing, that related to events in the 1960s and the 2010s. All were unsuccessful in Superior Court; their arguments will next be considered by the appeals court. 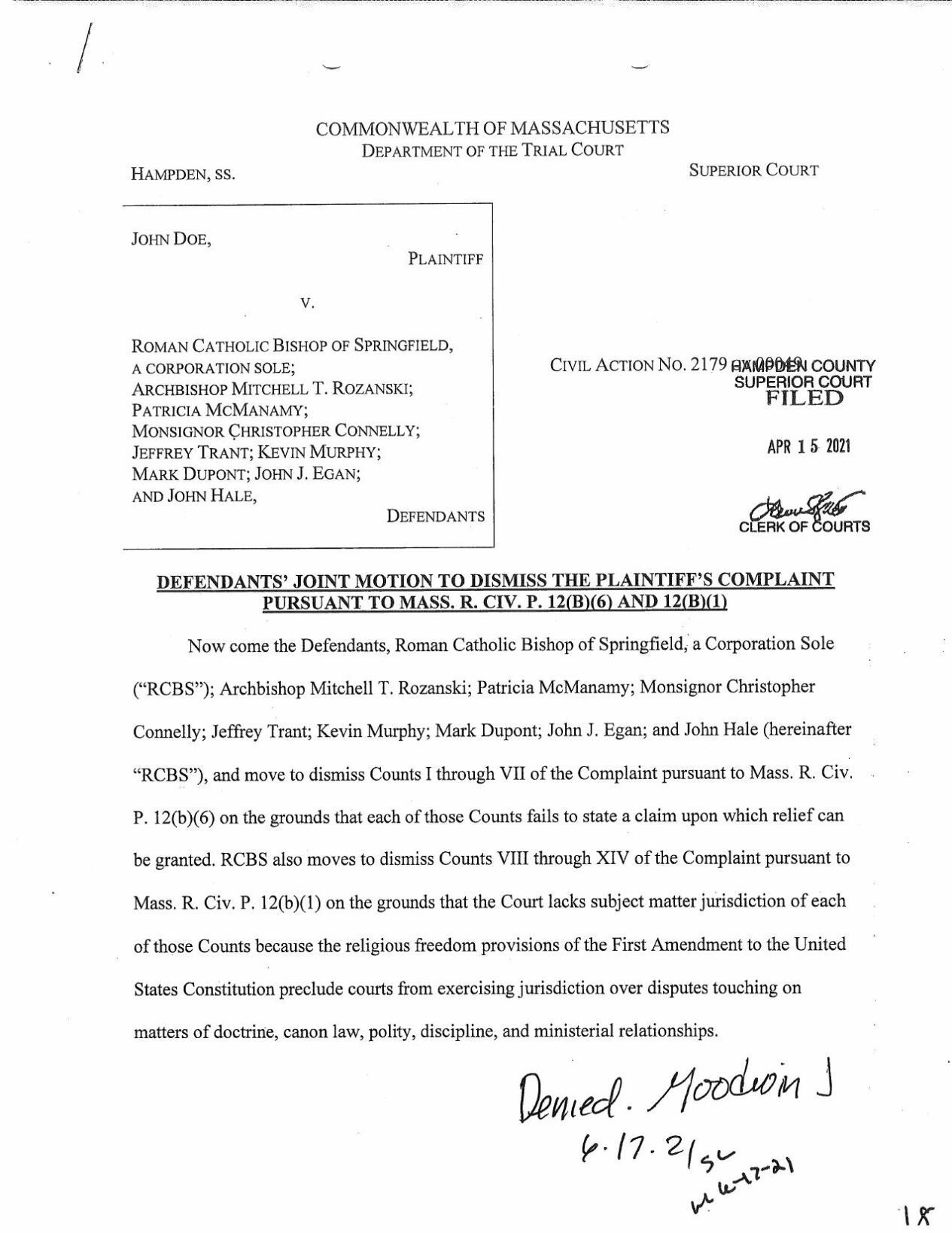 Nancy Frankel Pelletier, the plaintiff’s attorney, said the defense appeal will force her client to wait even longer for his case to be resolved. She said such a delay is unfair to survivors of clergy abuse.

“From Mr. Doe’s perspective, nothing whatsoever has changed,” she said in an email statement to The Eagle. “Delay, deny, cover-up appears to remain their strategy, all to the obvious detriment of those they have ignored for decades.”

Frankel Pelletier said the diocese did not engage in “good faith” settlement talks, despite admissions of wrongdoing.

That situation, she said, “left Mr. Doe with no choice but to pursue litigation. Once suit was filed, they sought to have it dismissed, claiming they were absolutely immune from liability as a charitable corporation, and because they claim that all of the actions taken by the individual defendants were protected as part of the ‘religious process.’”

“They are actively claiming that the court cannot require them to pay a single dollar to Mr. Doe,” she said.

Carolee McGrath, a spokesperson for the diocese, said it tries to reach settlements with survivors and is willing to do so in this case.

“Our goal is to always try to settle these matters rather than litigate,” she said. “That is not always possible for a variety of reasons, however, the diocese has been able to resolve virtually every case presented in the last 30 years and will endeavor to continue to do so. Even as a lawsuit proceeds, we remain open to providing a fair settlement.”

In her June 17 ruling, Judge Karen L. Goodwin also denied an effort by the defense to have the lawsuit dismissed on the grounds that civil courts cannot exercise authority over charitable organizations under certain circumstances. The defense also argued that the diocese, as a corporate entity, cannot be held to account for actions by individuals, including Weldon.

On that point, the judge accepted elements of defense arguments, including one that challenged whether the defendant referred to as the “Roman Catholic Bishop of Springfield, a Corporation Sole,” could be held liable for actions by individuals. But, Goodwin said the issue was not sufficient to lead her to grant a motion to dismiss complaints related to the 1960s sexual abuse, “if other potentially viable grounds exist for those claims.”

Separately, the judge said she believes that case law supports the ability of an entity, such as the diocese, to be held “vicariously” liable if actions by its employees are, in effect, ratified by the employer.

Along with Weldon, the plaintiff says he was raped by two other priests, the Revs. Clarence Forand and Edward Authier, both at or near St. Anne’s parish in Chicopee and at Camp Holy Cross in Goshen.

“Weldon, as bishop, allegedly not only knew of the sexual assaults upon Doe but participated in them and directed others to aid him in raping Doe,” Goodwin wrote. “These allegations could be construed to support an inference that the RCBS ratified the sexual assaults upon Doe. As a result, the defendants have not shown that the RCBS cannot be held vicariously liable for the acts committed by Weldon, Forand, Authier and others.”

In her 13-page decision, Goodwin said the defense had misapplied case law in arguing that the complaint should be dismissed because civil courts lack jurisdiction over “doctrine, canon law, polity, discipline and ministerial relationships.”

On that question of church autonomy, under the First Amendment’s clause regarding the free exercise of religion, the judge appears to distinguish between actual doctrinal matters and more secular actions.

For example, the diocesan Review Board, Goodwin said in her ruling, does not warrant protection due to the “religious disciplinary process.” The suit claims that the Review Board became part of a wider cover-up by the church to protect Weldon’s name and reputation.

That board, she wrote, “could not have been disciplinary or designed to assess the fitness of individuals to serve in clerical roles given that the three identified sexual abusers were deceased when the proceedings began.”

Also, only one defendant served on the board at the time in question.

Actions by defendants, Goodwin wrote, including “a series of meetings, reports, the intake form or written communication,” can be “viewed neutrally without construing Catholic dogma, doctrine, or policies.”

The Review Board eventually heard the current plaintiff’s case, after years in which he waited for action.

Any effort to conceal Weldon’s role in the rape of children ended when Rozanski, then bishop, accepted a report by Judge Peter A. Velis last June. Speaking of the future plaintiff, Rozanski declared that the church had “failed this courageous man.”

“I want to sincerely apologize to this victim,” Rozanski said, two months before leaving to become archbishop in St. Louis and eight months before being named as a defendant.

“Not just for the terrible abuse he had to endure as a young child, abuse which still haunts him to this very day,” Rozanski said.

Lawyers for the Roman Catholic Diocese of Springfield failed to persuade a Supreme Judicial Court justice to delay action on a lawsuit brought by a former altar boy sexually abused decades ago by a bishop.

A lawyer for the Roman Catholic Diocese of Springfield asked the state's top court Monday to halt a civil lawsuit brought by the former Chicopee altar boy who suffered sexual assaults decades ago at the hands of former Bishop Christopher J. Weldon.

The decision rejected a claim by the Springfield diocese that it was protected from a civil action brought by an altar boy who was raped by former bishop Christopher J. Weldon and other priests.