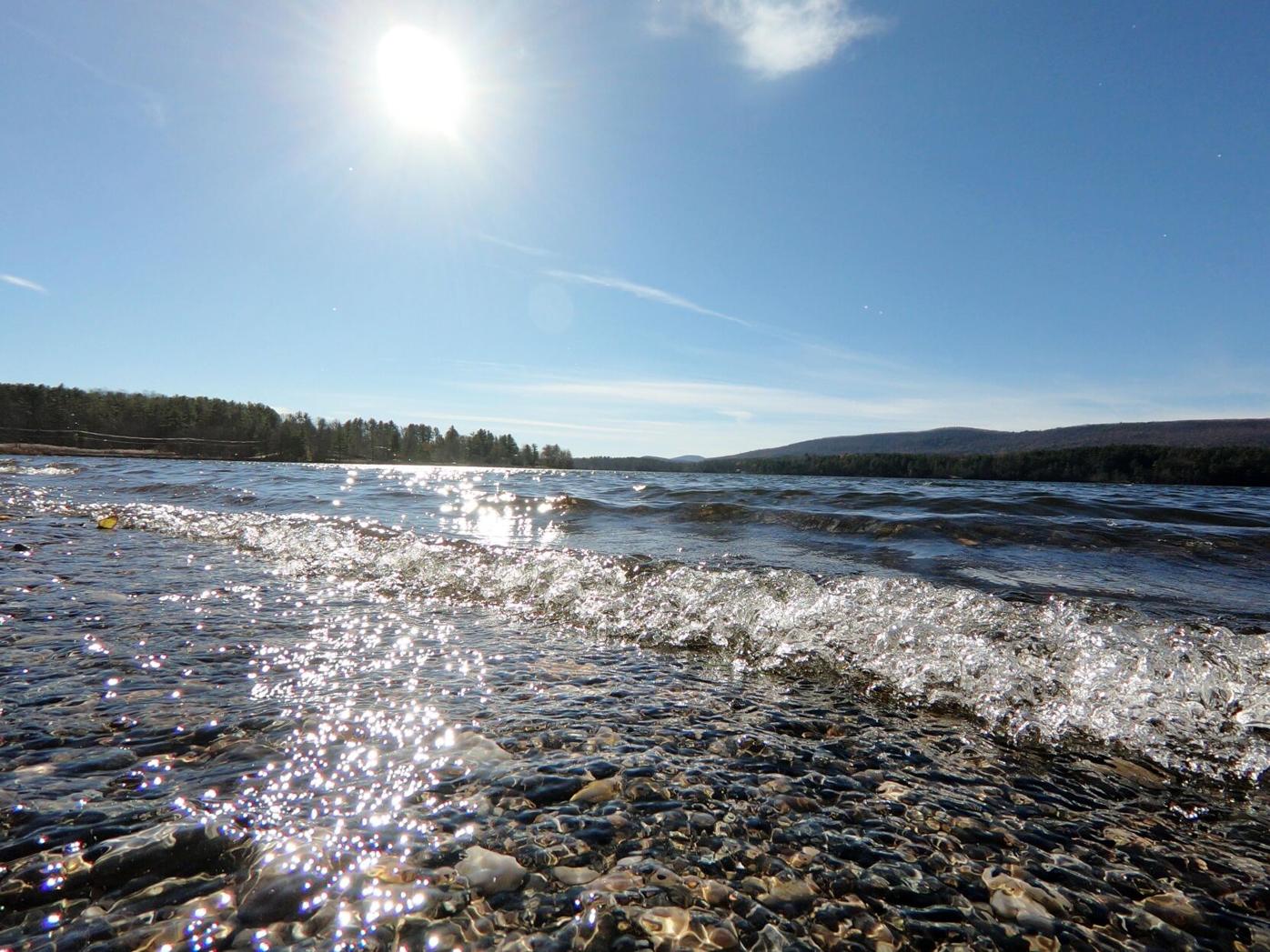 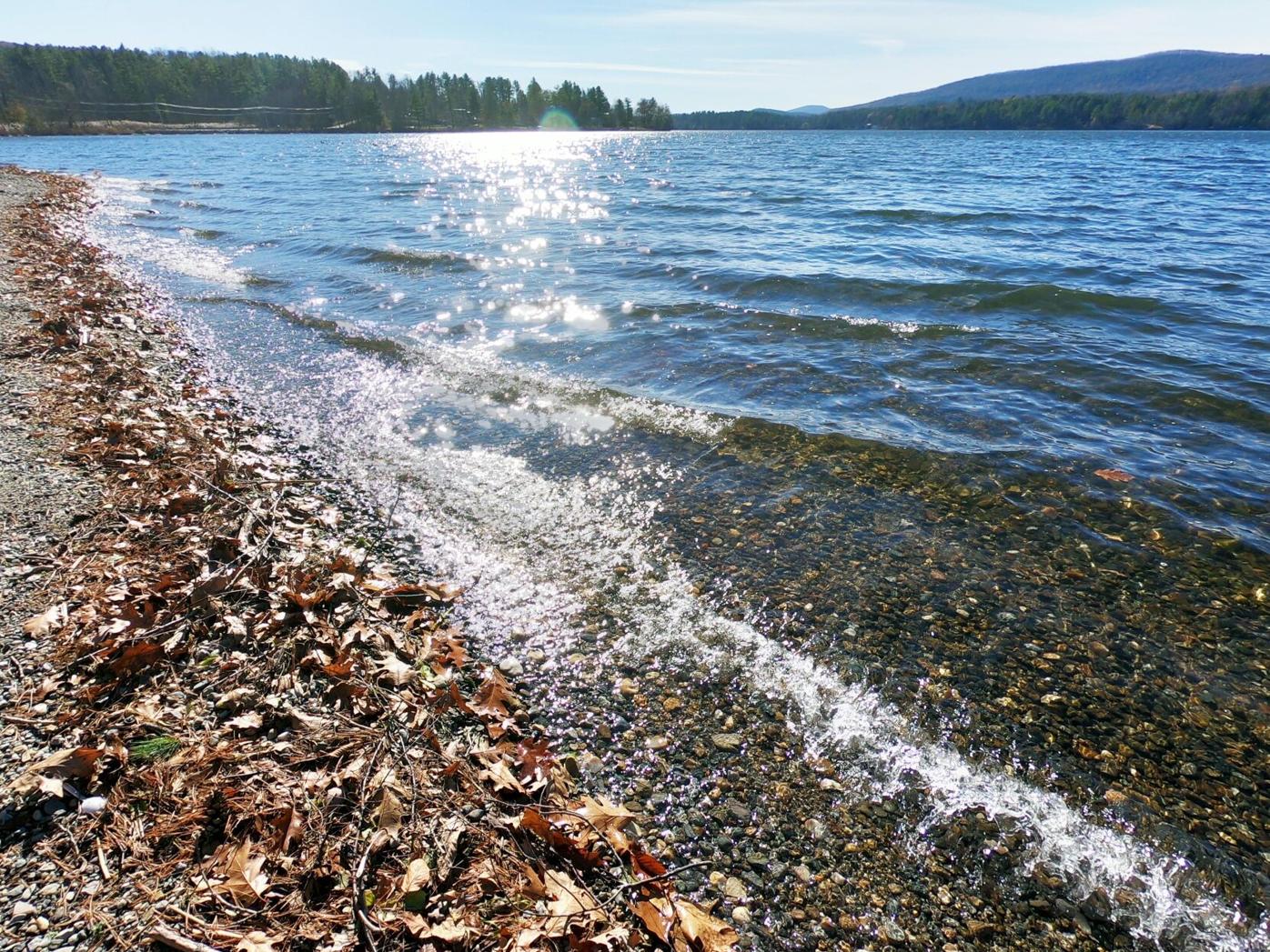 Agostini ruled in favor of the Stockbridge Bowl Association’s continuing efforts to test and then apply a widely used herbicide to control chronic weed infestation in the state-owned lake, which the town manages.

The judge asserted that the commission has continued to disobey his court order issued Dec. 3, 2019, allowing a pilot program test of a fluridone chemical treatment to attack Eurasian milfoil weeds. 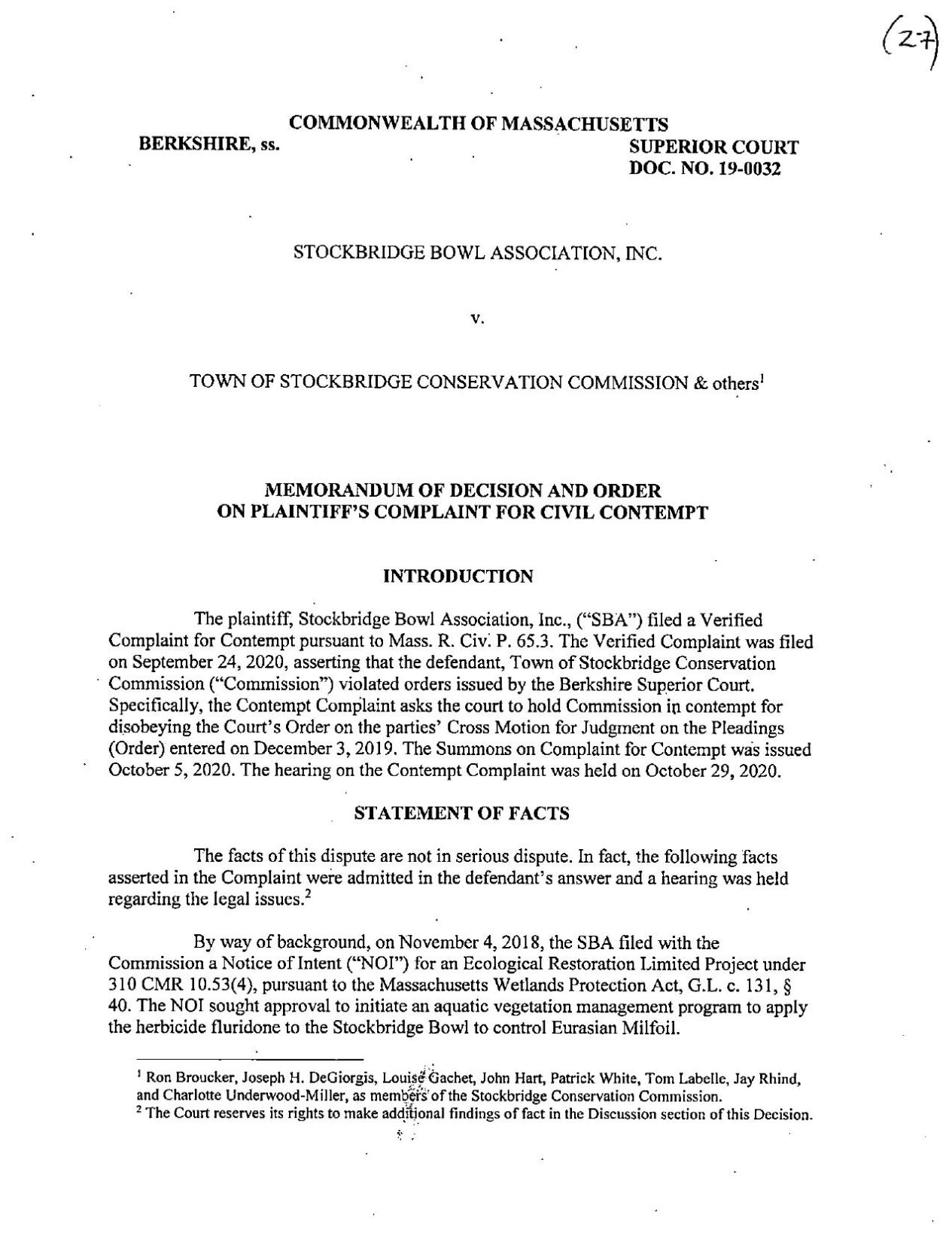 The SBA had filed a complaint with the court Sept. 24 arguing that the commission had violated the court’s order. The contempt citation, dated Tuesday, follows a summons issued by the court Oct. 5 and a hearing on the association’s complaint held Oct. 29.

“The facts of this dispute are not in serious dispute,” Agostini wrote in his decision memorandum. He noted that the state’s Natural Heritage & Endangered Species Program had approved the SBA’s original plan for a full-lake treatment of the herbicide, subject to specific conditions. NHESP, part of the state’s Division of Fisheries and Wildlife, protects rare snails that inhabit the shoreline of the lake.

Agostini also pointed out that the commission’s hired expert, Robert Kortmann, had suggested a test run of the fluridone treatment on a “large block” section of the lake to monitor its effects on calcite formation elsewhere in the Bowl. Kortmann stated that if there was no effect, it would be unnecessary to delay treatment of the entire lake.

However, the Conservation Commission denied the Stockbridge Bowl Association’s “notice of intent” to apply the herbicide. The commission also responded to a separate appeal filed by the association with the state Department of Environmental Protection resulting in a proposed settlement.

But, as Agostini wrote, the commission then outlined a new list of conditions for the test of fluridone that had not been proposed by the association or recommended by Kortmann.

“My review of this list compels the conclusion that, again, the Commission’s intent was simply to derail the application of the herbicide fluridone to the Stockbridge Bowl to control Eurasian Milfoil,” the judge’s order states.

The contempt citation allows the SBA to submit a request for attorney’s fees and court costs within 10 days and it orders the Conservation Commission to file an opposition to his citation, if it so chooses, to be followed by another court hearing.

Commenting on the judge’s contempt citation against the commission, Stockbridge Bowl Association President Richard Seltzer told The Eagle that “despite the SBA’s repeated invitations to discuss a settlement before the Court issued this ruling, the town never accepted the invitations.”

However, he added, “I hope that we can turn over a new leaf and all work cooperatively to protect and enhance the Stockbridge Bowl and the opportunities to enjoy the Bowl by everyone both in the Town of Stockbridge and beyond.”

In a statement to The Eagle, Selectman Patrick White wrote: “As a member of the Conservation Commission and the Select Board, I participated in all of the decisions cited in the contempt order. I know that it was never our intent to act with contempt; rather, we attempted to draft a set of conditions consistent with the Superior Court judgment that directed us to take into account Dr. Kortmann’s recommendations.

“Nevertheless, I take to heart the conclusions of Judge Agostini, an impartial observer, and in light of his contempt order I would like to apologize to the people of Stockbridge and to the Court.”

In his ruling, Agostini explained that the purpose of this week’s civil contempt filing is not to punish the Conservation Commission but to achieve compliance with his year-old order for the benefit of the Stockbridge Bowl Association.

A more recent set of conditions issued by the commission was aligned with his original court order, Agostini acknowledged. But, he noted, the SBA is seeking resolution of the contempt complaint and relief for the commission’s delay in issuing its latest list of conditions.

Agostini accused the town commission of “a clear and undoubted disobedience of his command” and he contended that it “took an axe” to the original court order.

“Having failed the first time, the Commission apparently viewed this as a ‘second bite of the apple,’ an opportunity to make it as challenging as possible for the herbicide fluridone to be employed in the Stockbridge Bowl,” the judge wrote.

He also stated that the commission’s recently revised permit for the herbicide test differs significantly from the permit the court had ordered for the lake.

“In addition to changing the nature of the project, Agostini stated, the Commission’s actions threaten the very existence of the project by withholding a decision to approve treatment of the entire lake” and giving itself “absolute authority to control and terminate the project at any time.”

He also asserted that the commission has continued “arbitrary and disingenuous” behavior through “confrontational actions, although possibly imbedded with good intentions, contrary to the letter and spirit” of his original court order.

“It was done intentionally to obstruct the SBA, without any pretense of lawful authority,” Agostini declared, adding that the town commission “intentionally violated the terms of the court order, instead, ‘doubling down’ and imposing additional conditions on the [fluridone test] permit that would derail it.”