SPRINGFIELD — A Hampden County judge on Monday said the Roman Catholic Diocese of Springfield can’t obtain information from a Berkshire Eagle journalist that could reveal the identities of anonymous sources.

"We've shown we're willing to fight to keep our promises to sources who speak with The Eagle on a confidential basis. We may have to mount that fight again, however.” Larry Parnass, The Eagle's managing editor for innovation

In a reversal of her earlier order related to a civil lawsuit against the diocese by a victim of clergy sexual abuse, Superior Court Justice Karen L. Goodwin said the diocese can only look to what nonconfidential sources told Larry Parnass, who began reporting on the abuse in 2019.

Goodwin also said that if the diocese wants to continue to press Parnass for communications and testimony involving sources to whom he promised confidentiality, it will first have to demonstrate what efforts it has made to get the information from other sources.

Goodwin, however, said the court is “open” to requiring Parnass to disclose whether any of his anonymous sources are trial witnesses, and “to produce the information those sources provided to him.” 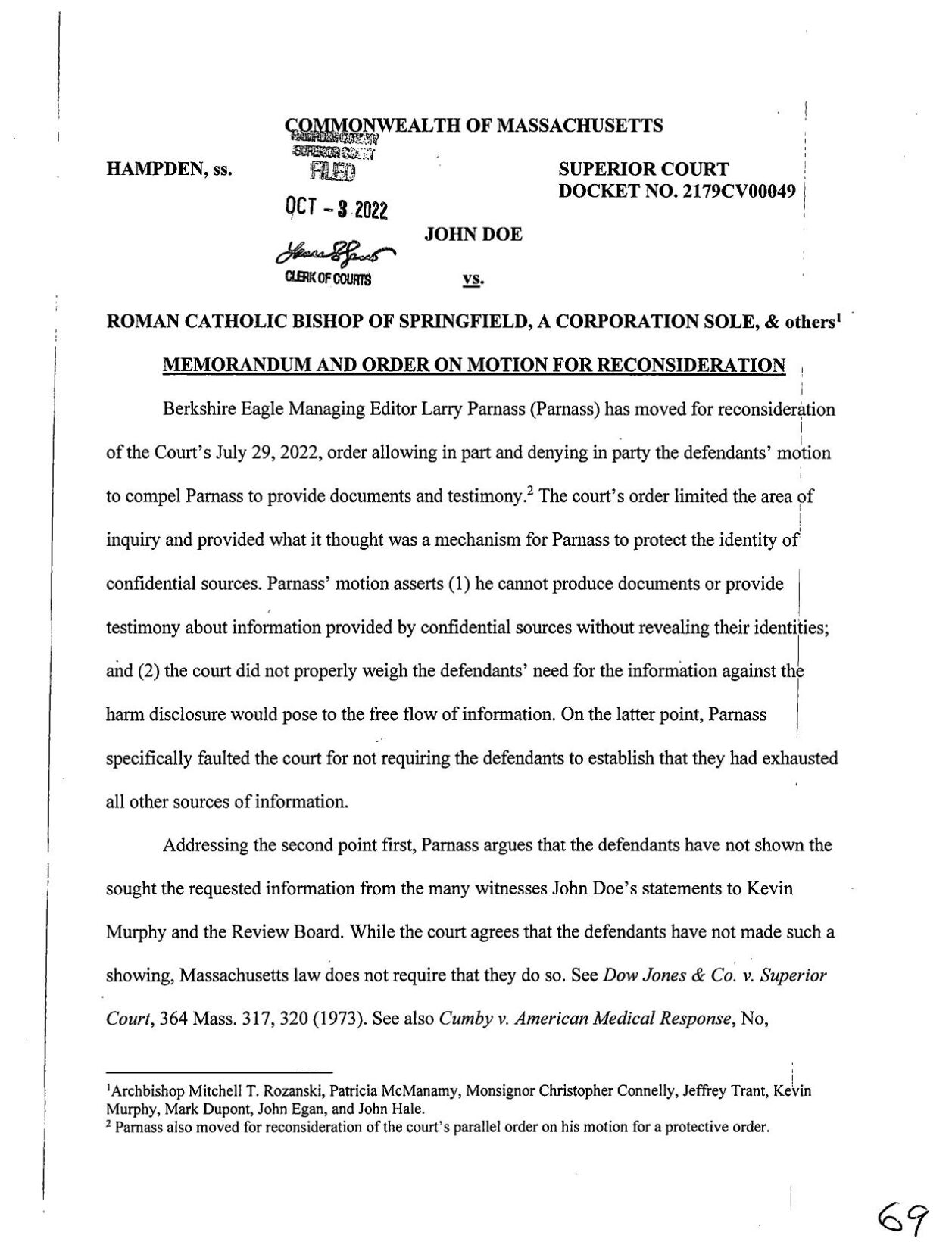 Given this, Parnass remains guarded.

“We’ve shown we’re willing to fight to keep our promises to sources who speak with The Eagle on a confidential basis,” said Parnass, the newspaper’s managing editor for innovation. “We may have to mount that fight again, however.”

The subpoena in March by the diocese for a wide range of Parnass’ notes, communications as well as testimony stems from a civil suit filed in January 2021 by an unnamed Chicopee man against the diocese and eight of its officials.

John Doe, as he is listed on court documents, claims he was brutally raped and abused by Bishop Christopher Weldon and and two other parish priests when he was an altar boy in the 1960s.

Reporting by Parnass revealed an attempt to cover up Weldon’s involvement. A report by an independent judge hired to investigate the claims supported this narrative.

The paper’s coverage of this was possible only with the help of a source to whom Parnass promised confidentiality.

Parnass and The Eagle’s attorney, Jeffrey J. Pyle, fought the subpoena on grounds mainly that providing the information — even redacted — would reveal identities.

Goodwin in July ordered the scope of the subpoena narrowed only to involve what John Doe told the church’s internal review board and investigator Kevin Murphy.

But even supplying just this, Pyle said, would reveal one of Parnass’ sources. He also said there were others who could supply the same information who had not been thoroughly probed.

And the diocese did not make a strong enough argument to outweigh the damage to Parnass’ continued reporting on this and other stories, Pyle also noted.

The situation had begun to raise wider concerns about a possible chilling effect on investigative journalism, should Parnass have been compelled to produce his notes.

Massachusetts does not have a shield law for reporters, and journalists and free press advocates have watched this situation closely.

In a hearing last month, Goodwin pressed diocese attorney Michael G. McDonough about whether other nonconfidental sources had been exhausted for the information.

McDonough said that what Parnass had learned was important enough for Parnass to trust it, making it critical for the diocese to see it. This, he said, would help in its defense by determining John Doe’s consistency in what he told people about the abuse.

In her revised order, Goodwin essentially said the diocese would have to show that it exhausted all other avenues to obtain this information before the court would even consider ordering Parnass to produce it.

Pyle said he is gratified by Goodwin’s reversal, and that the paper will fight new attempts that could strip protection from confidential sources in this case.

He also said he feels confident that Goodwin will continue to properly weigh the diocese’s right to obtain information for its defense with potential threats to the free flow of information to journalists.

That includes asking the diocese to exhaust other means of obtaining information they want.

“Our position has always been that the identity of Larry Parnass’ confidential sources is irrelevant to this litigation, and we think we’ll be able to make that showing at any further stage of this case,” Pyle said.

“We didn’t get everything we wanted, but we got most of what we wanted — she certainly recognized the most important fact and that is that all the information that was given to Larry confidentially will remain confidential,” said Rutberg, a retired Berkshire County judge.

Our Opinion: Legally targeting a journalist who exposed clergy abuse is a chilling tactic that the Springfield Diocese should drop

This week, a court ruling marked a victory for the rights and protections of the free press. Hampden County Superior Court Justice Karen L. Go…