LANESBOROUGH — A town cop is fighting to get his former sergeant’s duties back, saying he unfairly was stripped of responsibilities last spring by the police chief.

Brad Lepicier’s case is pending before the state Department of Labor Relations, with a resolution many months off. As often is the case with workplace grievances headed for arbitration, the issue of who did what, and when, is murky.

"There is more to this story than I can tell you."

According to a filing with the state board, Lepicier was demoted last April by Sorrell, and then faced what he claims was retaliation by the chief.

“Chief Sorrell has retaliated, harassed and discriminated against Sgt. Lepicier for contesting his unjust demotion,” the officer’s complaint says.

The Department of Labor Relations oversees complaints related to collective bargaining units in the public sector. Lepicier is a member of the Lanesborough Police Officers Association, Local 390.

Lepicier filed a grievance over the demotion, which came April 13, 2020. His complaint says that, two months later, Town Manager Kelli A. Robbins upheld the grievance — and ordered Sorrell to return Lepicier to the position of sergeant. But, the complaint says Sorrell did not follow Robbins’ directive. 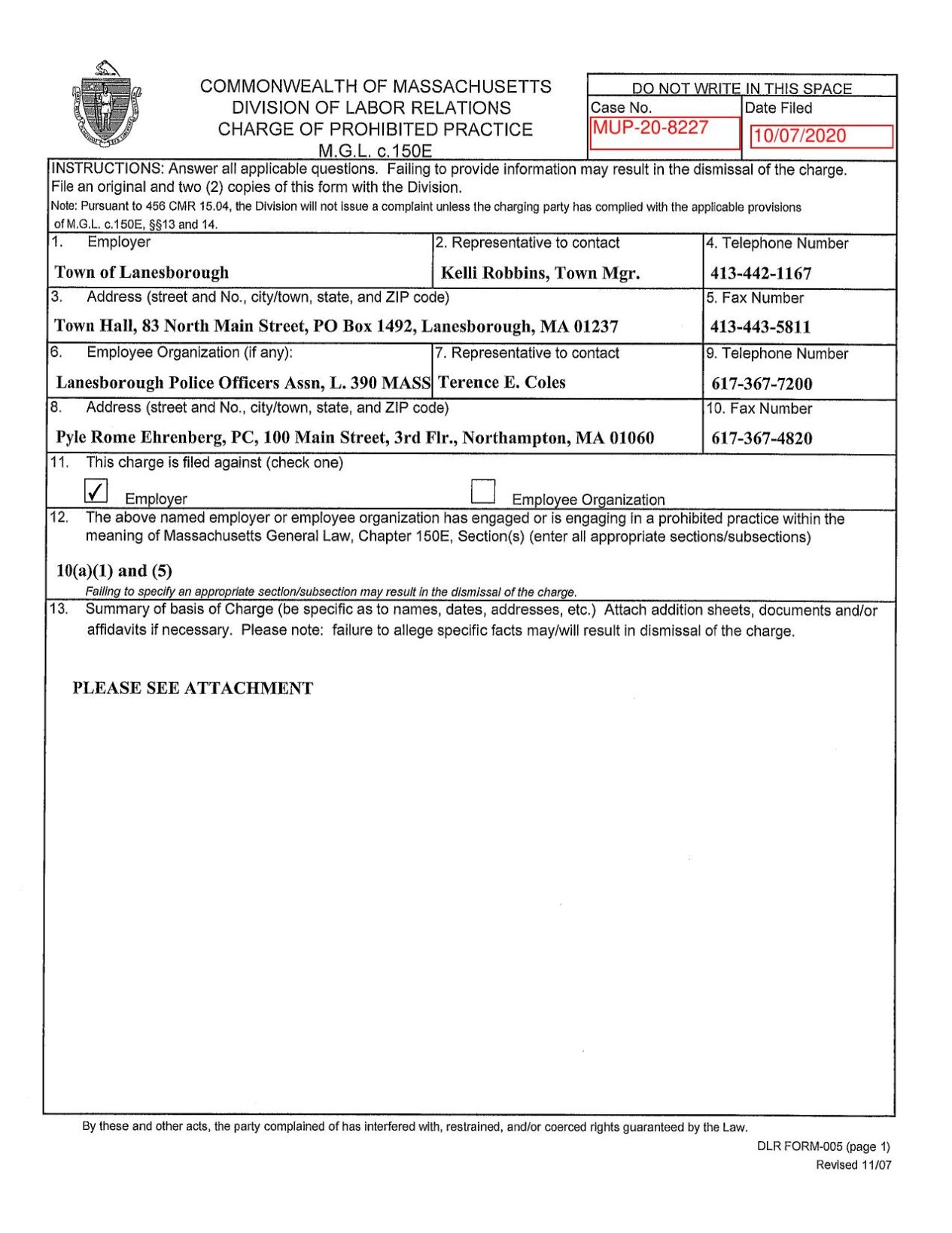 According to the complaint, Robbins told Sorrell that “any recent actions taken that have negatively affected [Lepicier] are to be reversed immediately.”

“I am not at liberty to discuss open cases,” she said by email, in response to questions. “As such I can neither confirm nor deny any information.”

The officer claims in the complaint that he was subjected to unfair treatment in violation of collective bargaining protections. A copy of the complaint was obtained by The Eagle.

Lepicier alleges, for example, that about a month after his demotion, on May 14, Sorrell wrote up the officer for not performing building checks while on duty.

“Other bargaining unit members have not performed these checks ... but have not received a similar memorandum,” the complaint says.

A month after that, Sorrell transferred duties that Lepicier had performed as a sergeant to another member of the force, according to the complaint. And in late June, the complaint says, Sorrell issued a written warning to Lepicier “for accidentally driving off in his cruiser while the cruiser was being refueled. Other bargaining unit members have engaged in this same action and have not received any discipline.”

The last allegation in the complaint concerns actions taken in September, when, Lepicier says, Sorrell told him he was looking into the officer’s use of vacation time. The complaint says Sorrell ordered Lepicier to provide the results of a COVID-19 test, though it asserts that neither the department nor town required that.

Sorrell said in an interview Monday that Lepicier’s demotion was relatively brief, from April to May last year, and was resolved through a grievance process. Lepicier is listed on the town’s website Monday as the small department’s only sergeant; the roster includes eight part-time officers, three full-time officers, an investigator, a sergeant and the chief.

Still, the chief acknowledged that some of the sergeant’s former duties might have been reassigned to another member of the department. He said town policy gives him the authority to decide how to allocate the department’s workload.

“It says the chief can change all that stuff,” Sorrell said. “It’s clear to me that I give it. And I take it away.”

He added: “There is more to this story than I can tell you.”

Sorrell planned to retire in 2020 but extended his service. He now plans to step down June 30, after more than three decades with the department and nearly six as chief. The next hearing on the case before the Department of Labor Relations is scheduled for October, Sorrell said, after he steps down.