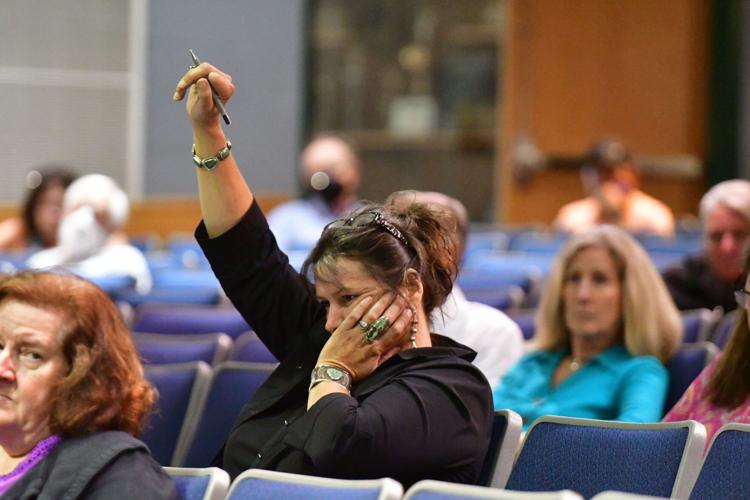 Anne Langlais holds up her hand while waiting to speak during a public forum at Lee High School on Thursday on the planned PCB landfill in Lee. She and others debated possible legal strategies to cancel the plan, in a session hosted and led by the Select Board. 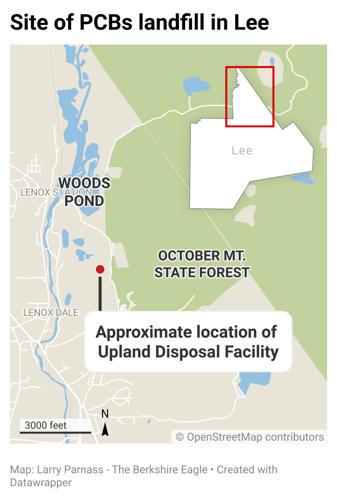 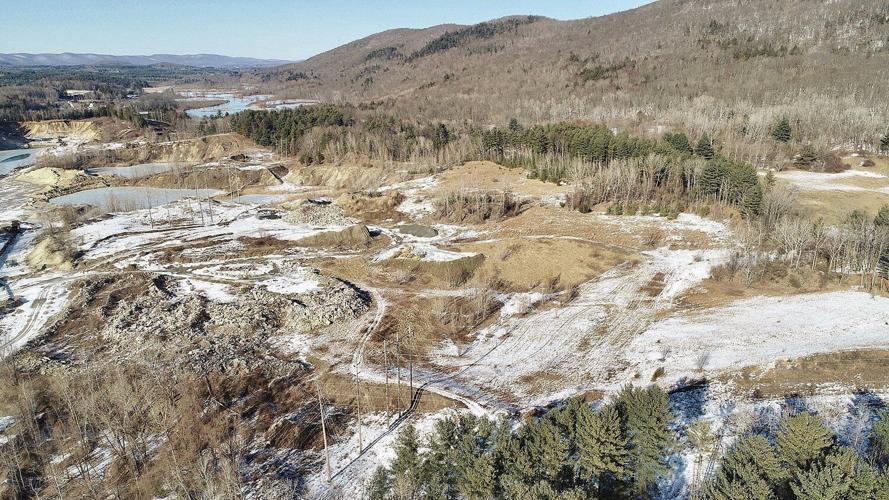 A view of the approximate area of the planned Upland Disposal Facility in Lee. Under the terms of the revised Housatonic River cleanup agreement, General Electric Co. will be permitted to bury roughly one million cubic yards of material contaminated with PCBs in a 20-acre landfill at this former quarry. Woods Pond, just north of the site, is visible in the upper left portion of the photo. 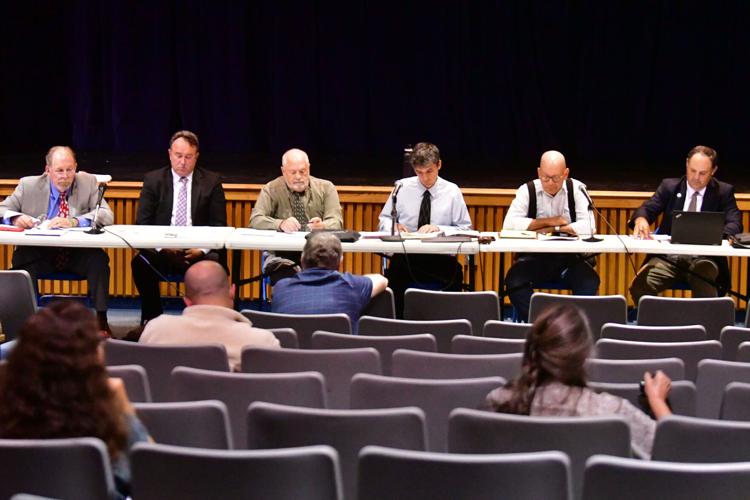 From left, Attorney Christopher Myhrum, Town Counsel Jeremiah Pollard; Gordon Bailey, Sean Regnier and Bob Jones of the Select Board, and Town Administrator Christopher Brittain listen to the public during a forum on the proposed PCB landfill in Lee. 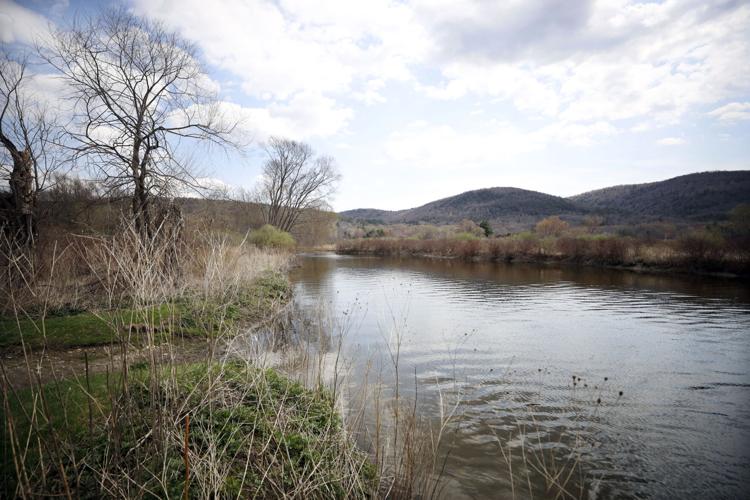 About 40 residents of Lee turned out Thursday to discuss ways the town might be able to block the creation of a PCB landfill on a former quarry south of Woods Pond. The landfill was announced in February 2020 as part of a Rest of River cleanup settlement that a majority of residents now opposes. 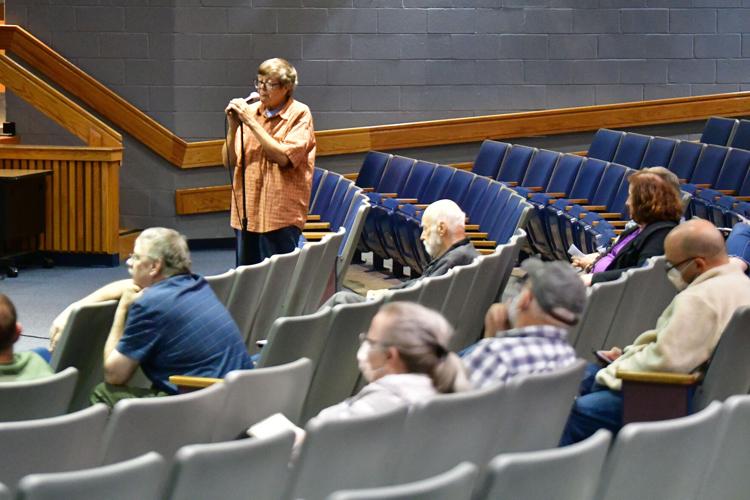 Tim Gray, executive director of the Housatonic River Initiative, speaks during the forum.

LEE — With two lawyers at the head table, elected and appointed leaders in Lee worked in public Thursday night to map legal strategies on a pressing local question: Can the town stop a plan to bury PCB-tainted sediments here?

Within minutes, it became clear Lee faces a heavy lift, due to a lopsided legal landscape that gives state and federal governments, through “preemption,” a greater say over the Environmental Protection Agency’s current Rest of River cleanup.

And perhaps the only say, the attorneys warned.

That caution, delivered by Christopher Myhrum, an environmental lawyer hired by the town, and by Lee’s town counsel, brought steady challenges from residents who hope to have local health officials join the fight against the EPA’s Housatonic River plan, which would create a landfill south of Woods Pond to receive as much as one million cubic yards of sediment containing relatively lower levels of polychlorinated biphenyls.

The General Electric Co.’s Pittsfield plant released PCBs, a probable carcinogen, into the river for decades.

The night offered an attorney-client confab writ large – and at times a contentious one.

More than 40 people gathered in the auditorium of the Lee High School quizzed members of the Select Board, who sat at a long table before the stage. Officials were joined by Myhrum, Town Counsel Jeremiah Pollard and Town Administrator Christopher Brittain.

At the outset, the board’s chair, Sean Regnier, asked members of the audience to think about what lies ahead and to keep their emotions in check.

“We’re not here to go backwards and talk about why we got here,” he said. “The fact of the matter is, here we are.”

Board member Gordon Bailey said the purpose of the panel’s special meeting was to “find out what our legal issues are” and to gauge legal liability the government of Lee could face, if it chooses to act to oppose the landfill.

Bob Jones, a board member, said time is a factor. “This is a really big issue. And we have to come to a decision on this, and fairly soon. That’s why we’re here,” Jones said.

He said the point of the informational hearing is to better understand – officials and residents alike – what factors must inform any future legal strategy.

The 13-year Rest of River cleanup, with its planned Upland Disposal Facility in Lee, is scheduled to begin in 2023 and cost an estimated $563 million. The project must still overcome an appeal of the EPA approval filed in May by two environmental groups, the Housatonic River Initiative and the Housatonic Environmental Action League.

Opponents of the landfill pressed Myhrum on the question of a Board of Health inquiry into whether the landfill poses a threat to public health.

“You don’t think we can win, going through the Board of Health?” asked Anne Langlais, a town resident who manages the Facebook page “No PCB Dumps in Berkshire County.”

“I would like to see you have more of an open mind that we could go through the Board of Health. We need you to be open-minded. We could win,” she said.

While members of the Select Board framed the night’s work as a collaborative effort, several residents came to a microphone at the front row of seats to question whether town officials were committed to shaping a winnable fight against the landfill.

None of the board’s three members were serving when Lee joined other Berkshire County towns in accepting the February 2020 settlement that included the landfill — and a $25 million payment to Lee.

Several residents who spoke Thursday pressed for the health board to explore its own challenge.

“We have to go down fighting and I don’t think we should be ruling this out altogether,” said Monica Ryan, a town resident.

Judith Knight, an attorney who has represented landfill opponents, took to the microphone to say she differed with Myhrum on his view that the legal concept of preemption trumps any authority by the local Board of Health.

Knight said she believes that if the town health board studied the landfill case and decided it was a threat to public health, the burden would be on the EPA to prove that the health of townspeople would not be at risk.

Myhrum said, in response, that the health board could certainly hold a hearing and act. “I’m just saying that it wouldn’t be enforceable,” he said. “The law is that EPA does not need any permits.”

Tim Gray, executive director of the Housatonic River Initiative, added his voice to hopes that the health panel can play a role. “This Board of Health thing has a possibility,” he said.

Health board on tap

Dr. Robert Wespiser, chair of the Board of Health, said that his panel needs to act on solid evidence.

“Is the [landfill] unsafe? Does it present a significant health hazard to people?” he asked. “We need engineering assessments and we need to see the [EPA] plan.”

Proposed Lee PCB ‘dump’ to be discussed by local health officials. But do they have the power to intervene?

Wespiser said he’s been researching cases in which local health officials were able to take action in similar instances. The health board is open to holding a hearing, he said.

Still, he cautioned that the board may not be able to gather evidence it needs to come to a judgment on the landfill’s health risks. The board does not have the authority compel GE to come to a hearing, he said.

“EPA has already told us they are not going to come,” Wespiser said. “We need information and expert opinion.

The EPA says the Upland Disposal Facility will be able to store PCBs safely. In a recent statement to The Eagle, a spokesman for the EPA’s Region 1 office in Boston said the landfill will have a double liner at the bottom and its top, shrouded by a membrane, will sit under one to two feet of fill.

“The cover layer is expected to last several hundred years if properly maintained,” the spokesman said.

By burying the bulk of tainted sediments in Berkshire County, GE stands to save an estimated $200 million.