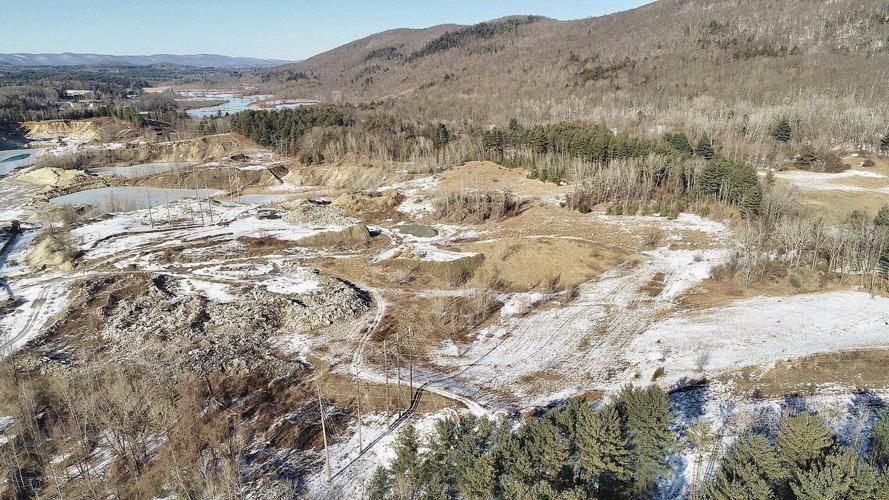 Four residents of Lee filed a lawsuit this week asking Berkshire Superior Court to void the town’s agreement to house a planned PCB landfill as part of a settlement with the General Electric Co. 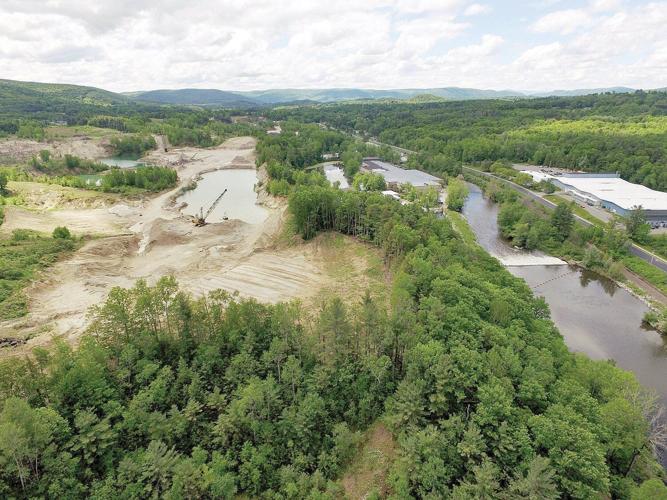 The former Lane Construction quarry lies near the Housatonic River south of Woods Pond. It is the planned location of a PCB disposal site allowed under the Environmental Protection Agency’s latest permit for the Rest of River cleanup.

PITTSFIELD — Four Lee residents want a court to decide whether civic leaders exceeded their authority when they agreed to allow an old quarry to house toxic chemicals without bringing the issue to residents.

Lee officials are on record saying that they believe they acted in the town’s interests.

In a lawsuit filed this week in Berkshire Superior Court, the residents — three of them are members of Lee’s representative Town Meeting — say the Select Board breached its duty and abused its discretion when it signed on to a settlement that allows the General Electric Co. to bury 1 million cubic yards of sediments containing polychlorinated biphenyls in an engineered landfill.

The action brings to a head a year of debate that has pitted residents opposed to the dump against the town’s top board. And it widens the legal challenges already facing the Environmental Protection Agency’s latest plan to remove toxins from the Housatonic River. 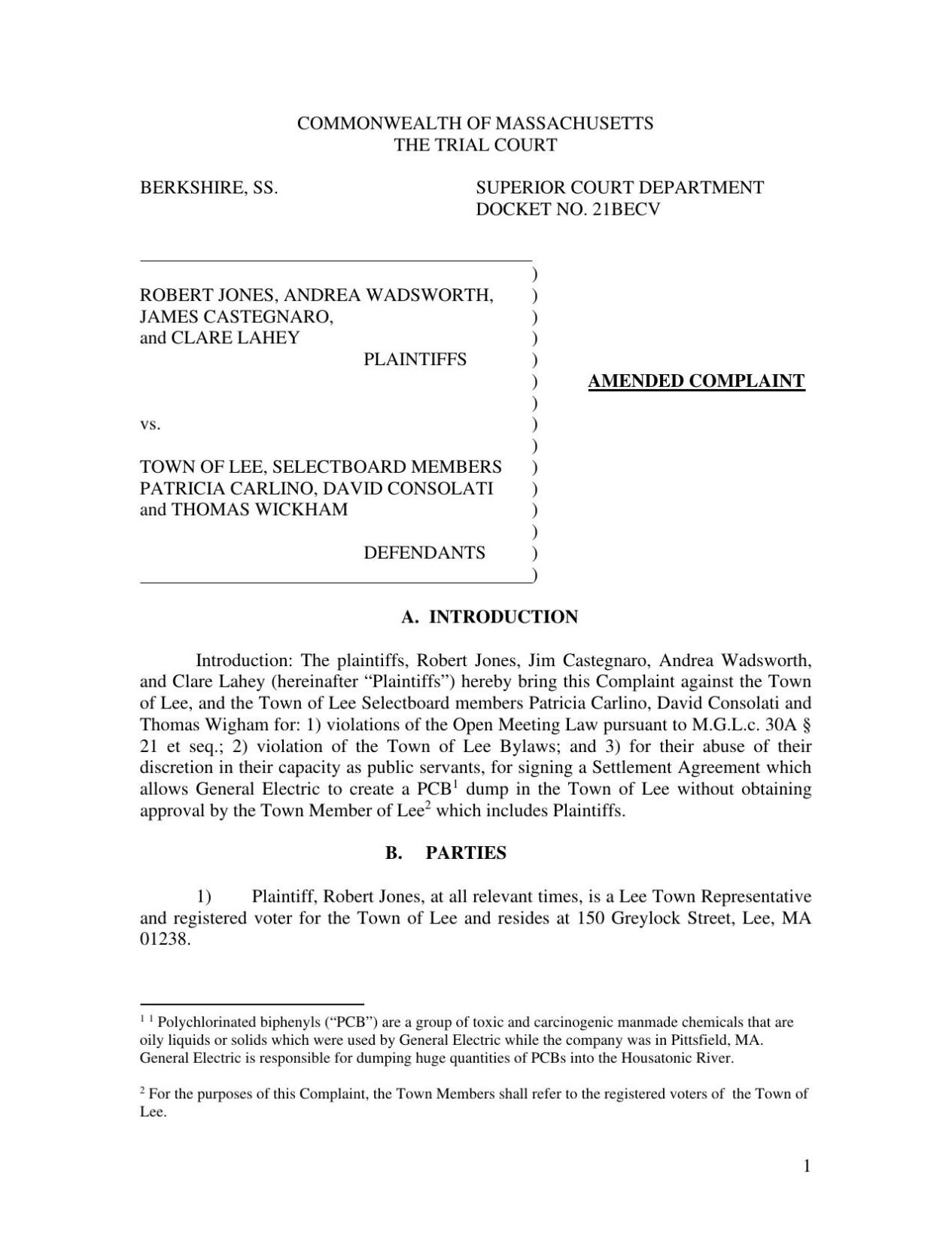 On Feb. 5, 2020, Thomas Wickham, the Lee board’s chairman, signed on to the secret deal during an executive session — which the lawsuit also claims was improperly called.

“The Select Board acted independently without the authority of town meeting, which is a violation of their duty to the town,” Judith C. Knight, the Great Barrington attorney representing residents, said in an interview Thursday. “For them to do this in secret and not put it before town [residents] is shocking.”

As of Thursday afternoon, the defendants had not been served notice of the lawsuit, Knight said.

Officials have said pointedly that they held the authority to back the settlement. In late January, the Lee Select Board rejected a call by residents to reverse its approval of the February 2020 agreement that made local PCB disposal a part of a decadeslong river cleanup.

The lawsuit asks the court to find that the Select Board was not authorized to sign the agreement that would place an “Upland Disposal Facility” in Lee to accept lower levels of PCB-tainted river sediments, with soils that exceed a certain level of contamination going to a licensed facility outside Massachusetts. The town is poised to receive $25 million from GE as part of the deal.

PCB dump in the Berkshires? It's on the table, activist reveals (copy)

The former Lane Construction quarry lies near the Housatonic River south of Woods Pond. It is the planned location of a PCB disposal site allo…

It asks the court to declare the town’s approval of the settlement “null and void.” It also proposes, as an alternative, that the court find that any aspect of the agreement that concerns Lee, including the planned dump, be struck down.

In its 2016 Rest of River cleanup permit, the EPA had insisted on out-of-state disposal. That led to an appeal by GE, a court’s suggestion that the EPA reconsider that requirement and then, after secret mediation, to the current plan.

Knight, the attorney representing Lee residents, argues in the six-page suit that Lee bylaws compel the Select Board to present issues like this to townspeople. She also contends that by approving the settlement and dump plan in executive session, the board did not follow rules on what constitutes legal grounds for excluding the public, in violation of the Open Meeting Law.

On that question, the office of Attorney General Maura Healey already has found that Lee, and other towns that signed on to the settlement, did not violate the Open Meeting Law. Knight’s lawsuit includes an appeal of the attorney general’s finding. 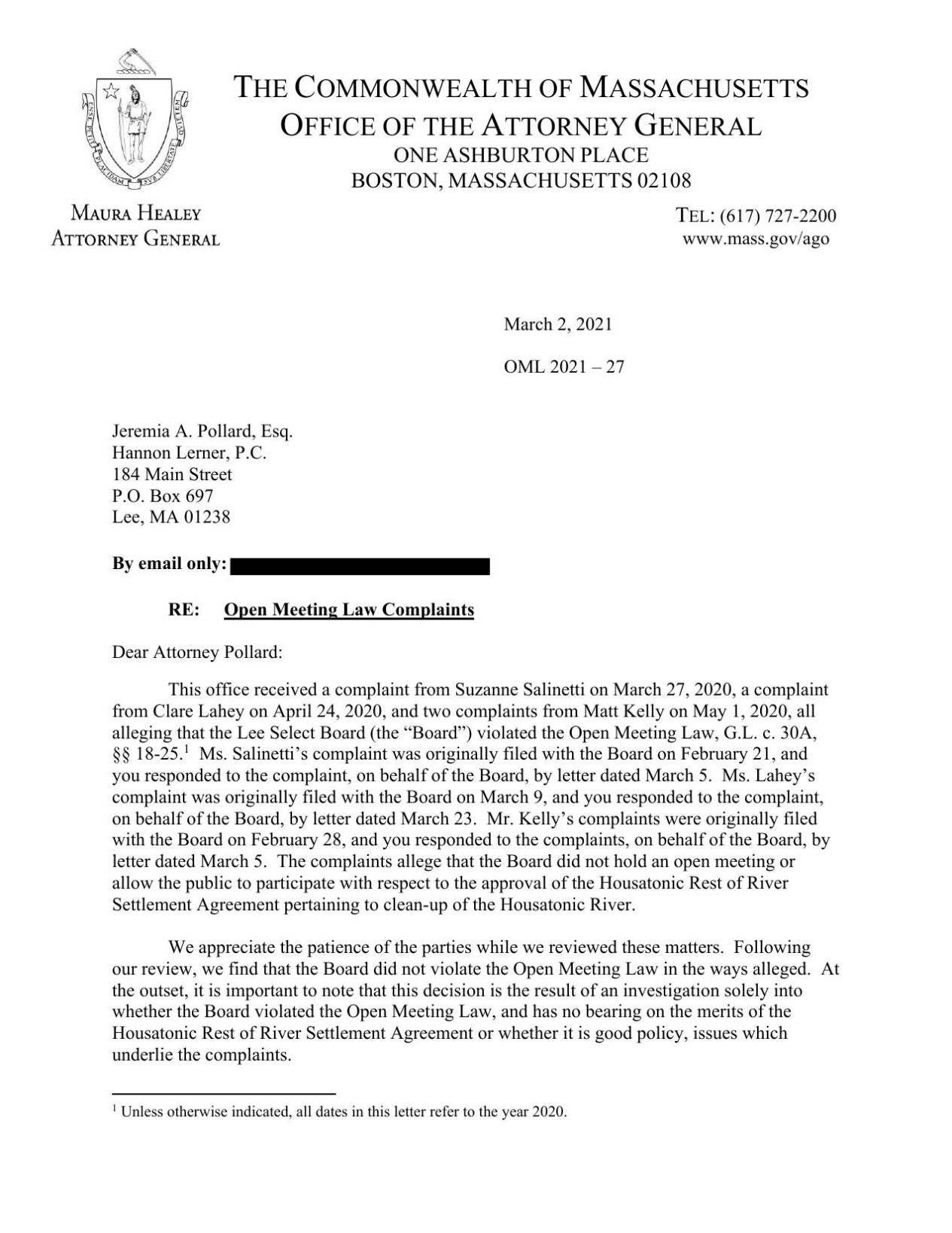 In the complaint that went to the attorney general, Lahey, a current plaintiff, joined with residents Suzanne Salinetti and Matt Kelly to argue that the Select Board failed to hold open meetings on the settlement.

The AG’s office, though, found that the Lee board’s executive session was lawful because of an exemption permitting discussion of pending litigation. It found that the board did not have to return to public session to ratify the agreement.

The question of whether Lee officials violated rules on executive sessions is key to the residents’ lawsuit. They assert that deliberations about the settlement should have taken place in public.

The private mediation, led by Washington lawyer John Bickerman, ran during 2018 and 2019.

The lawsuit also advances the argument that the Lee board’s support for the settlement ran counter to state law that says “a town may make contracts for the exercise of its corporate powers, on such terms and conditions as authorized by the town meeting in a town.”

Not informing Town Meeting of the private talks, Knight said, constitutes a breach of duty to constituents.

“They badly botched this process by not bringing it to town members,” she said. “How in the world would the residents of Lee know that this was a possibility? Their first duty is to their own town.”

Members of Lee‘s top board did not misstep legally, a judge says, when they decided to accept a PCB landfill as part of a dramatic reset last year on plans to remove toxins from the Housatonic River.

The Attorney General’s office ruled this week that a bylaw change approved during Lee’s town meeting last June cannot go into effect because it conflicts with state law. The finding is a setback for opponents of a proposed PCB dump.