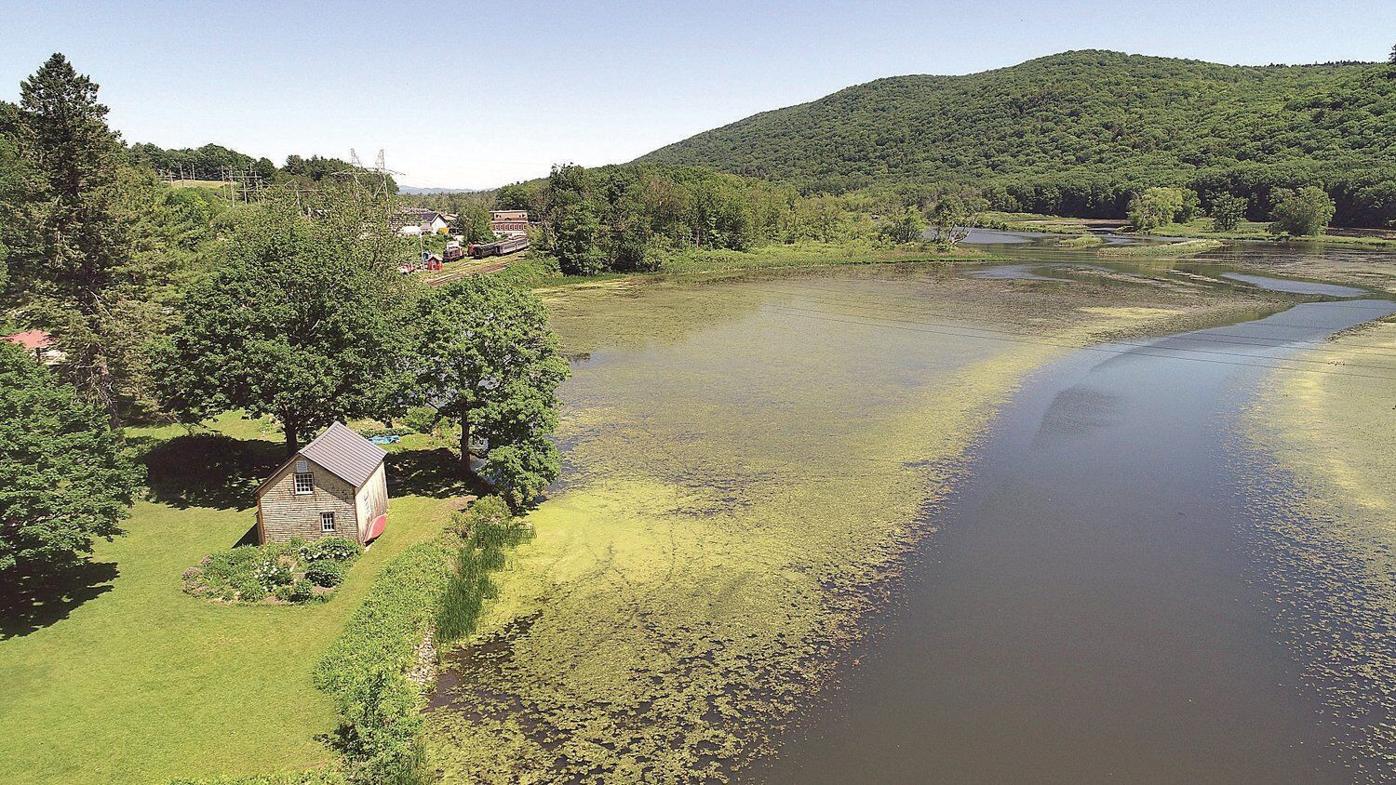 Woods Pond in Lenox would be the site of significant dredging of PCB-tainted soil, some of which would be buried in a landfill nearby, as part of a Housatonic River cleanup agreement between the Environmental Protection Agency and the General Electric Co. Two groups that oppose the plan have appealed, with a full legal brief due by March 5. 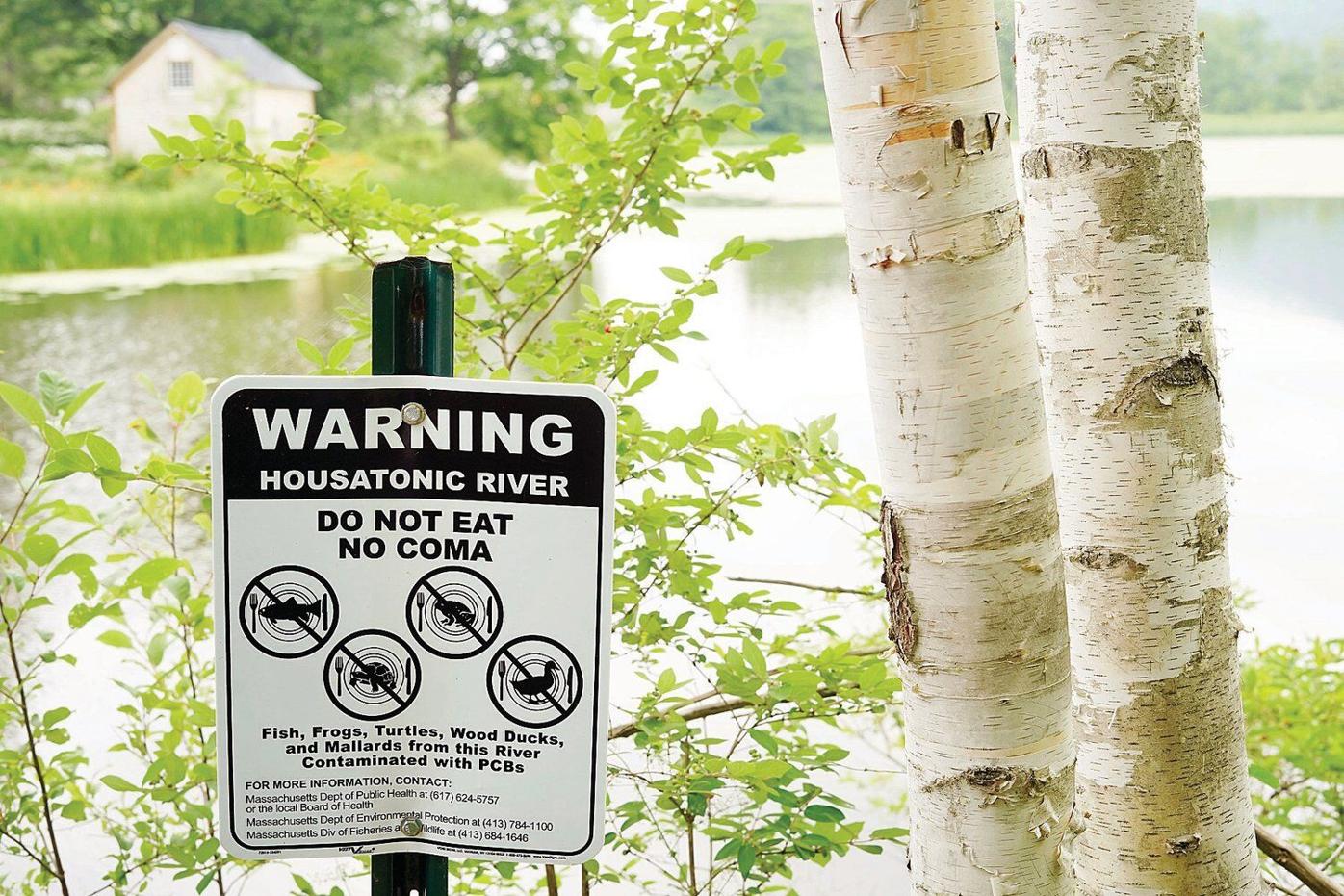 A sign warns against eating fish and other species taken from Woods Pond in Lenox Dale.

LEE — The legal fight against a secretly negotiated Housatonic River cleanup, one that includes disposal of lower-level toxins in a Lee landfill, will be spelled out by early March, the start of what appears to be additional years of litigation.

As promised in December, opponents of the Environmental Protection Agency’s latest plan to address PCB pollution in the river notified an environmental court in Washington, D.C., that they will contest it.

They sought — and secured — another month to prepare the legal brief that will seek to derail a settlement agreement reached in secret mediation one year ago with the EPA and the polluter, the General Electric Co., as well as a host of municipalities and environmental groups.

Lawyers said at the time that they needed more than the two weeks remaining in an appeals period (it was to expire Feb. 3) to assemble their argument.

“The extension is requested because the factual and legal background of the appeal is complex and technical,” the lawyers said, “and requires review of an administrative record that spans over 20 years.”

Judge Kathie A. Stein of the Environmental Appeals Board approved the request, which the EPA’s Boston regional office did not oppose. Stein was part of the three-judge panel that, in 2017, heard challenges to the EPA’s 2016 cleanup plan — which, at the time, did not include local disposal of the polychlorinated biphenyls that befoul the river and its flood plain, put there by GE’s transformer business in Pittsfield. 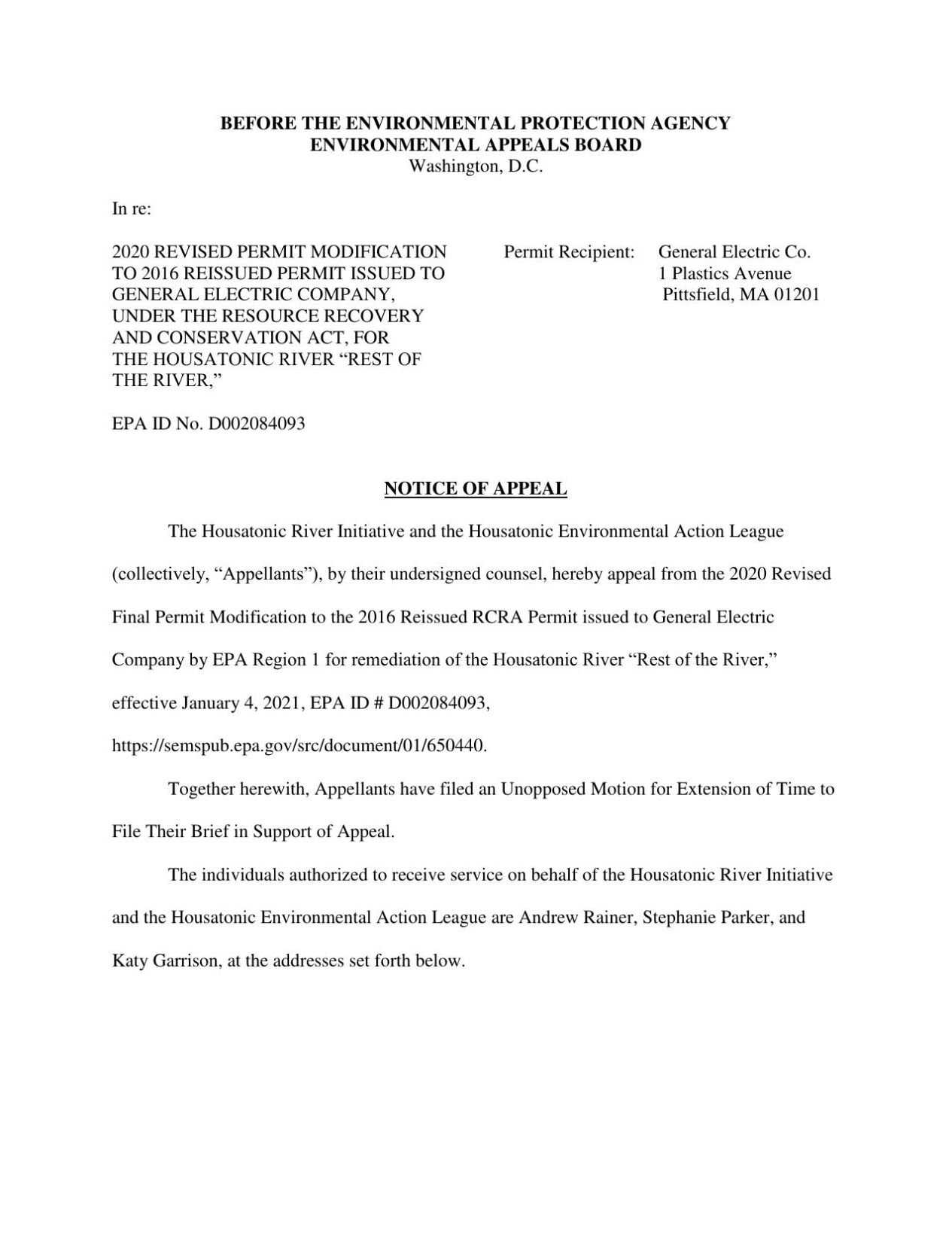 The appeals brief is due on or before March 5.

Tim Gray, executive director of the Housatonic River Initiative, said Tuesday that he and others expect to begin reviewing drafts of the document as soon as this weekend with their legal team. If the appeal fails before the Environmental Appeals Board, opponents plan to pursue a remedy in the U.S. District Court system.

“The First Circuit is still down the line, unless something happens with the EAB,” Gray said. “Everything looks good.”

The groups opposing the current cleanup plan, which became final in December, are represented by attorneys Andrew Rainer of Brody, Hardoon, Perkins & Kesten in Boston; Stephanie R. Parker of O’Connor, Carnathan & Mack in Burlington; and Katy T. Garrison of Murphy & Riley in Boston.

Separately, residents of Lee and allies in neighboring towns have tried to persuade their town’s Select Board to revoke its February 2020 support, along with four other riverfront towns and the city of Pittsfield, for the settlement agreement. Lee’s buy-in stands to bring the town a $25 million payment from GE.

That money, though, cannot be paid until the EPA permit survives all legal challenges.

Last week, Lee officials declined to overturn their top board’s backing for the settlement agreement. That plan allows GE to dispose of about 1 million cubic yards of lower-level PCB-tainted sediments in an engineered landfill in a former quarry. PCBs, banned now for several decades, are considered a probable carcinogen.