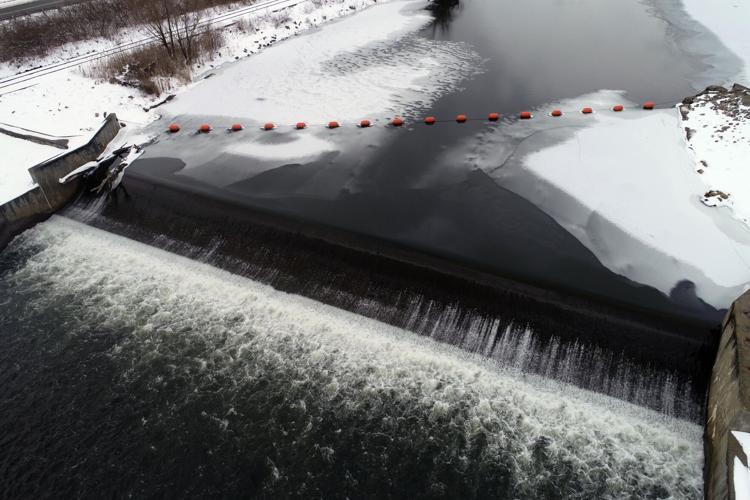 An aerial view of Woods Pond along the Housatonic River. A newly filed legal brief seeks to overturn the current Environmental Protection Agency plan to use a landfill in a nearby former quarry to bury sediments containing PCBs, a probable carcinogen. 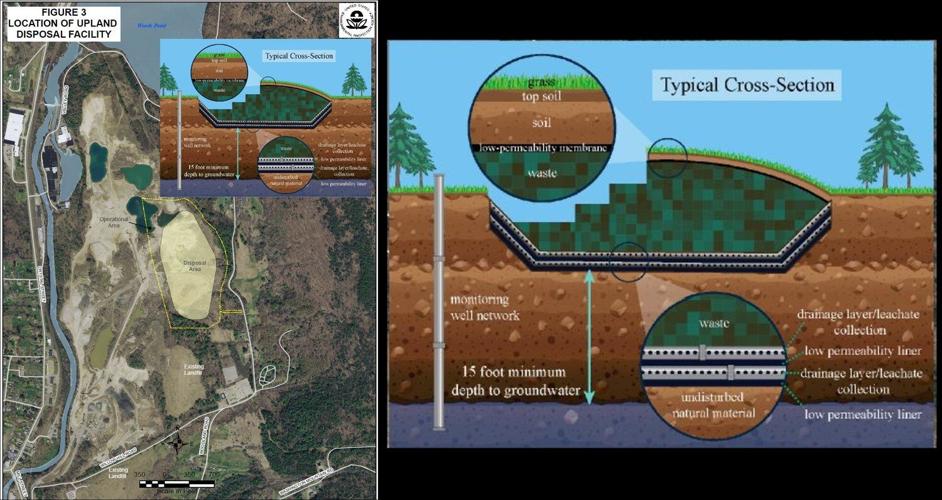 A diagram of the location and design of the proposed Upland Disposal Facility in Lee, which would be used to bury up to 1 million cubic yards of soils and sediments tainted with lower levels of polychlorinated biphenyls.

PITTSFIELD — As they open a new court fight over plans to bury toxic material in Lee, lawyers for two local environmental groups are finding an ally, of sorts, in the Environmental Protection Agency.

In a brief filed with the nation’s top environmental court, lawyers representing the Housatonic River Initiative and the Housatonic Environmental Action League contend that the federal agency failed to show why it is backing a dump it refused to endorse in a 2016 permit.

“The Region’s decision to require onsite disposal is based upon a complete reversal of its prior factual findings without any new investigation or change of circumstances,” the lawyers write in their brief to the Environmental Appeals Board. “That is the very definition of arbitrary and capricious agency conduct.”

The 67-page filing, which arrived on the court’s docket Monday, kicks off a new legal phase in the 20-year effort to more fully address the General Electric Co.’s history of polluting the Housatonic River from its former Pittsfield transformer plant. The litigation now stands in the way of the settlement that GE reached with the EPA and other parties a year ago, after more than a year of secret talks.

A diagram of the location and design of the proposed Upland Disposal Facility in Lee, which would be used to bury up to 1 million cubic yards …

The full-throated brief comes in at 13,993 words, just seven words short of the maximum allowed for this type of filing. The lawyers representing the environmental groups on a pro bono basis are Stephanie R. Parker of the firm O’Connor, Carnathan & Mack, LLC, of Burlington; Katy T. Garrison, of the firm Murphy & Riley, PC, of Boston; and Andrew Rainer, of the firm Brody, Hardoon, Perkins & Kesten, LLP, of Boston.

The other side hasn’t been heard from yet. A request for comment from the EPA is pending. The court has set an April 5 deadline for a response by the EPA. Lawyers for GE notified the court that they will provide the company’s response by April 5 as well.

The court wants to see “friend of the court” briefs by March 26; one group, the five-town municipal committee that embraced the settlement, has indicated that it will weigh in.

Opponents of the Lee dump have said that if their arguments fail at the Environmental Appeals Board, they will take their objections to other federal courts. It remains to be seen when a cleanup could begin. The current permit calls for GE to engage in about $576 million worth of work over 13 years. Officials with the EPA’s Boston office have said PCBs can be safely buried at the quarry and hailed the settlement reached a year ago as an improvement in the overall cleanup.

What the groups want

• Given the balance of risks and costs and the lack of support for onsite disposal, the Region [the EPA's regional office] should be directed to select an offsite disposal option for all untreated PCB waste.

• The Region should be directed to fully and fairly evaluate bioremediation and thermal desorption and to select a remedy which utilizes these proven technologies to the maximum extent practicable.

The brief asks that the court order the EPA to upend the February 2020 settlement, and its December permit, by compelling GE to ship polychlorinated biphenyls to licensed disposal sites out of state — not to the planned Upland Disposal Facility in a former Lee quarry. More broadly, it faults the current Rest of River cleanup permit, released in December, for not embracing alternative means of attacking the presence of PCBs in the river flood plain.

The groups also object to what they see as an inadequate scope for the cleanup, one that would leave at least half of the PCBs in place, and what they view as a “failure to set binding performance standards for GE’s cleanup along “many stretches of the River.”

The brief argues that the current permit’s steps, “and the secret process used to reach them,” violate the 2000 Consent Decree that governs GE’s cleanup obligations and various federal laws.

The brief asks the justices who sit with the Washington court, who heard an earlier appeal of the EPA’s 2016 permit, to allow oral arguments.

“As the Board knows from the prior appeal, this is a case in which there is enormous public interest and concern and a case that will impact many communities in Western Massachusetts and Connecticut,” the lawyers write. “Many members of the public, and the Petitioners specifically, feel that their voices have not been a meaningful part of the Region’s decision-making process, which occurred most recently in closed door settlement negotiations. … The public was not privy to any proposals that were considered or the positions of the parties during the negotiation, and no administrative record of the proceeding was made.” 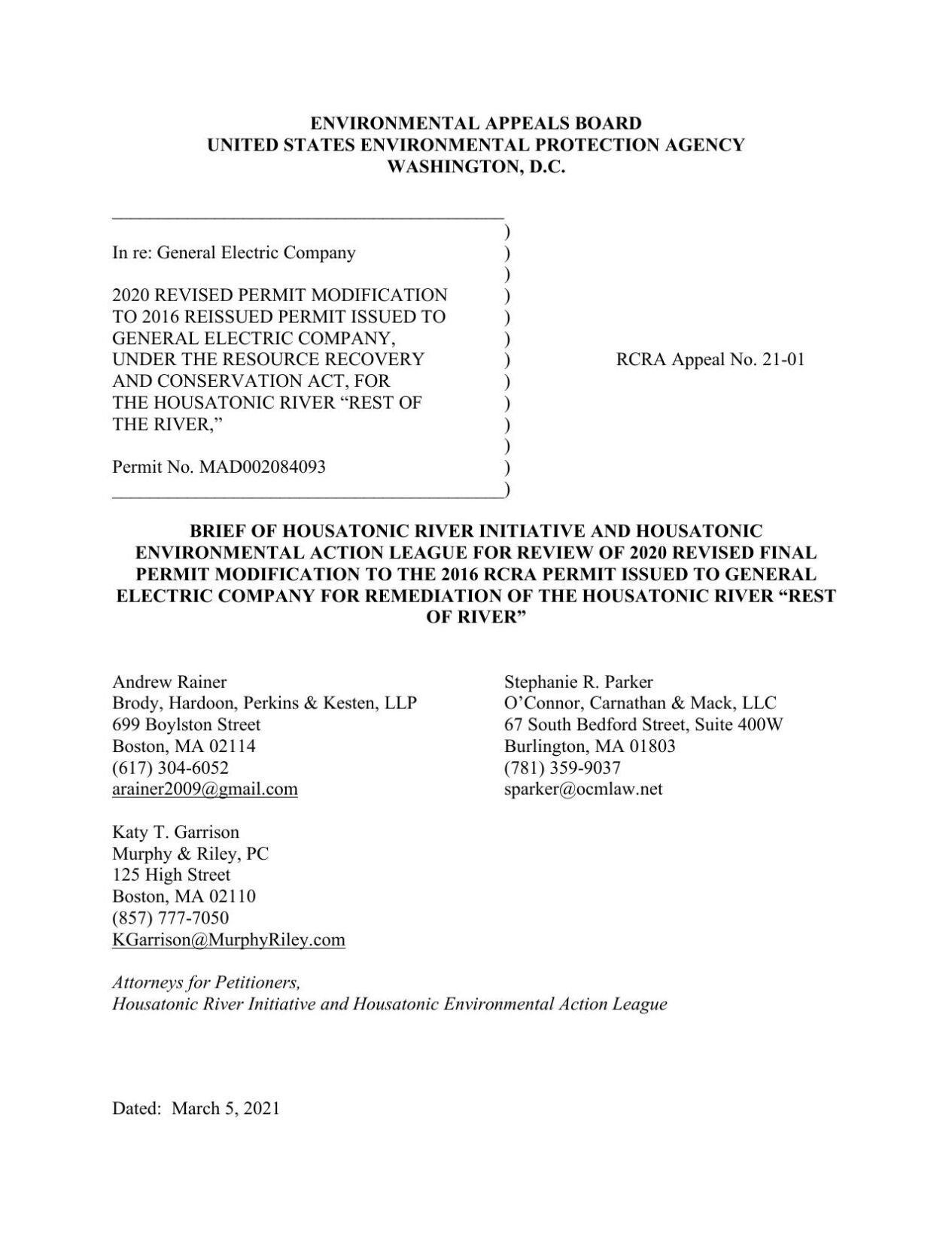 Though the Housatonic River Initiative and the Housatonic Environmental Action League were candidates to join the secret mediation, HEAL refused to sign a confidentiality agreement, the brief says, and HRI, led by Tim Gray, of Lee, was kept at a distance after making clear its opposition to local burial of PCBs.

Separately, opponents of the Lee dump pressed the town’s Select Board to overturn its decision early last year to endorse the settlement. Lee expects to receive a $25 million payment from GE under that deal. The board is standing by its support for the current permit.

Several times, the brief returns to a core argument: Before the EPA was in favor of the disposal of lower levels of PCB-tainted soils and sediment in a local landfill, it was against it.

“Prior to the secret settlement negotiations in 2020, the Region concluded that onsite disposal was inappropriate because it was less protective of human health and the environment than offsite disposal,” the lawyers write.

Why an oral argument

The brief opposing the current cleanup permit for the Rest of River project gives these reasons for seeking an oral argument before the Environmental Appeals Board:

Petitioners respectfully request oral argument on this appeal. As the Board knows from the prior appeal, this is a case in which there is enormous public interest and concern and a case that will impact many communities in Western Massachusetts and Connecticut. Many members of the public, and the Petitioners specifically, feel that their voices have not been a meaningful part of the Region’s decision-making process, which occurred most recently in closed door settlement negotiations. It is thus critically important to the Petitioners that they now be heard.

The Petitioners have made extensive, persistent, and diligent efforts over the last two decades to participate in the Rest of River cleanup process. For these reasons, oral argument would serve the interests of a full and fair adjudication of the issues raised in this appeal.

The agency’s earlier opposition, the brief argues, was based on hard evidence that the Lee quarry site was unsuitable for a PCB repository. The EPA felt that way, in part, because of the nature of the quarry’s soils and underlying bedrock, as well as its nearness to the river. The agency also had objected because the proposed dump is located on a stretch of river that has been classified as an “area of environmental concern.”

The EPA also had opposed local PCB disposal because people in the Berkshires were so firmly against it.

“However, after its secret Settlement negotiations, the Region completely abandoned its prior determinations regarding the risks of onsite disposal and suddenly decided that such disposal was now the best option,” the lawyers write.