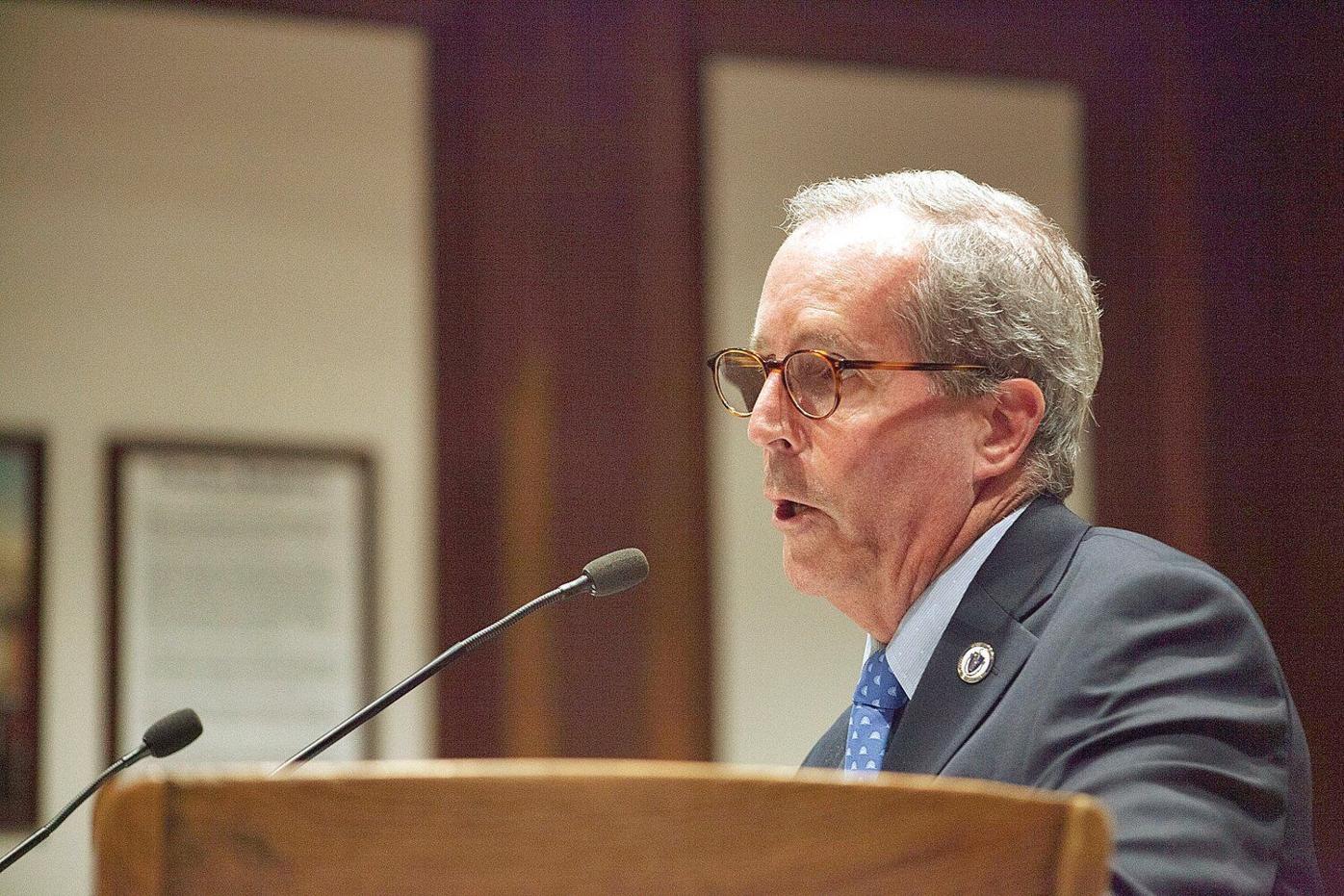 State Rep. William "Smitty" Pignatelli addresses a legislative committee on Wednesday to advocate passage of his bill that would require all first responders to carry the overdose-reversal medication naloxone. "No family should have to watch a loved one die in front of them, in front of a first responder, waiting for Narcan to show up," he said. 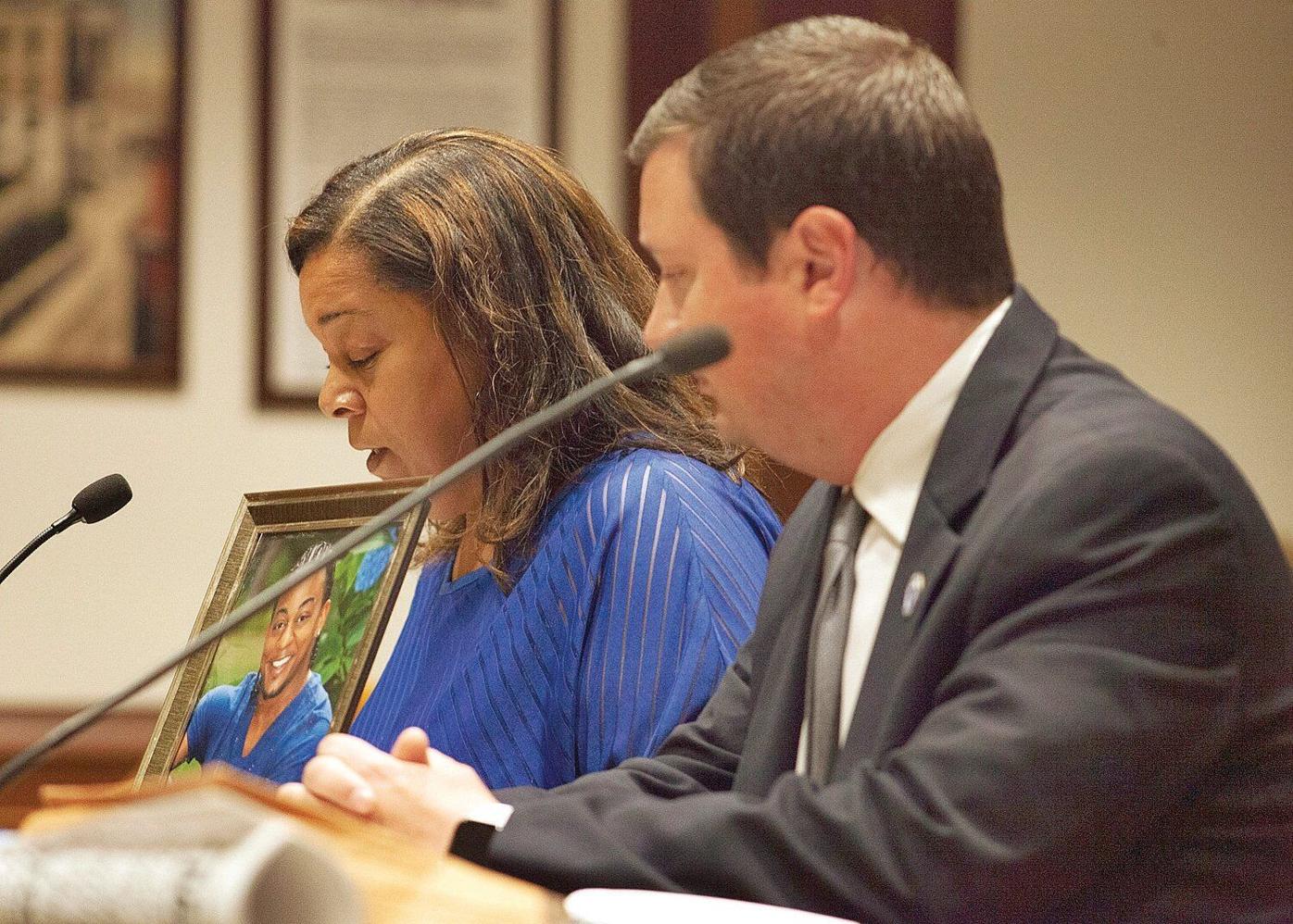 Tamika Perry, a constituent of Sen. Patrick O'Connor, right, holds up a photo of her son Khai Perry, who died from combined drug intoxication in 2016, during a Mental Health, Substance Use and Recovery Committee hearing Wednesday at the Statehouse.

State Rep. William "Smitty" Pignatelli addresses a legislative committee on Wednesday to advocate passage of his bill that would require all first responders to carry the overdose-reversal medication naloxone. "No family should have to watch a loved one die in front of them, in front of a first responder, waiting for Narcan to show up," he said.

Tamika Perry, a constituent of Sen. Patrick O'Connor, right, holds up a photo of her son Khai Perry, who died from combined drug intoxication in 2016, during a Mental Health, Substance Use and Recovery Committee hearing Wednesday at the Statehouse.

BOSTON — Deaths from opioid overdoses have declined slightly in Massachusetts over the past two years, but speaker after speaker stressed to a legislative committee Wednesday that efforts must continue to limit an epidemic that still claims an average of more than five lives per day.

From educating students about "Good Samaritan" laws to expanding access to overdose-reversal medication, supporters touted a range of bills they said would help reduce the death toll during a Joint Committee on Mental Health, Substance Use and Recovery hearing.

"While our fatal overdose numbers have thankfully declined by 11 percent in Massachusetts, according to the [Department of Public Health's] data just released, people are still dying," said Rep. Liz Malia, who offered a bill to increase insurance coverage of addiction treatment. "There is much work to be done."

Malia's bill, similar to one filed by Sen. John Keenan, would require private insurance companies to cover up to 30 days of addiction treatment.

Under current law, they must only offer coverage for 14 days, which supporters of the legislation said does not allow users enough time to complete detox programs and enter the next phase of treatment.

"They reach 14 days and there's nowhere else for them to go," Keenan said. "The end result is what we commonly refer to, unfortunately, as the 'spin cycle': people come into detox, get detoxed, have nowhere else to go, and are discharged."

In 2014, the Legislature passed a bill allowing individuals to get up to 14 days of acute addiction treatment covered by insurance without first seeking authorization from the carrier. The Senate's original version had called for 21 days, but lawmakers settled on 14 in a compromise with the House.

Keenan said even greater coverage is already offered for those on public insurance: MassHealth covers up to 90 days of treatment through the Residential Rehabilitation Services Program, and the legislation would bring private insurers slightly more in line with that standard.

Several people who testified at Wednesday's hearing shared personal stories of loss to addiction and opioids.

Tamika Perry, a Duxbury resident whose son Khai died in 2016 from an overdose, asked the committee to advance a Sen. Patrick O'Connor bill that would require public schools to increase their awareness campaigns about substance use.

The bill in particular would require educators to inform students about a section of state law that grants legal immunity to individuals who call for help in an overdose situation. When Khai was dying of combined drug intoxication, Perry said, no one called first responders "until full rigor mortis had set in."

"The people in the apartment were afraid to call and make an attempt to save Khai's life," Perry said, holding up a framed photo of her son. "In essence, there's a possibility my son would still be here today if a call were made sooner. Khai had his entire life ahead of him, and while he was responsible for his choices, I do believe a lack of education on substance abuse led to his death."

Rep. William "Smitty" Pignatelli, D-Lenox, recounted to his colleagues a story of an emergency call in the Berkshires last year.

Police were called to an overdose situation, but the officer who made it to the scene first was not equipped with the overdose-reversal medication naloxone. The officer waited with the family for an ambulance with the drug on board to arrive, but relief came too late and the individual died.

That incident, Pignatelli said, is evidence that the state should ensure every single first responder in Massachusetts has naloxone — often referred to by the brand name Narcan — on hand to address opioid overdoses, particularly given how time-sensitive cases tend to be.

"No family should have to watch a loved one die in front of them, in front of a first responder, waiting for Narcan to show up," Pignatelli said.

His bill would require all communities to stock police, fire and EMTs with naloxone.

Other bills the committee is weighing would launch a pilot program to increase the use of fentanyl test strips, which supporters say is a crucial measure to help prevent deaths. The strips can be used to check heroin or other substances for the presence of fentanyl so that drug users know whether drugs are tainted before consumption. Fentanyl, a synthetic opioid far more potent than heroin, was detected in 92 percent of opioid deaths where a toxicology screen occurred in the first quarter of 2019, according to the most recent DPH data.

Middlesex County District Attorney Marian Ryan called for passage of a bill that would create an opioid stewardship fund using money from opioid manufacturers and distributors.

"The specific goal of this fund would be to supplement folks who need Narcan," she told reporters. "Narcan is not something you can ration to make it to the paycheck or the next month. Somebody needs it, you have to use the dose. What we have tragically seen is somebody who uses a dose cannot afford to make that copay right now, so they don't replenish their supply, and then somebody overdoses and they don't have it."

While the committee is considering a slew of proposals, it did not hear testimony Wednesday on supervised consumption sites, where individuals could use drugs without arrest under the watch of medical professionals who can intervene in an overdose.

House Chairwoman Marjorie Decker announced the committee will host a separate hearing "shortly" on legislation related to that controversial idea — which was recommended by a state panel but has drawn threats of prosecution from U.S. Attorney Andrew Lelling.

In July, at a hearing to examine the full results of the Harm Reduction Commission, Decker's committee heard hours of testimony from supporters and experts who urged quick action on a supervised consumption pilot, warning that lives hang in the balance.