LENOX — A search for a new, full-time school district superintendent is on a fast track now, aimed at selecting a finalist within two to three months.

School Committee Chairman Robert Vaughan announced the high-speed schedule at the committee’s meeting Nov. 2. Interim Superintendent William Cameron has agreed to stay on until his successor can start work next spring or by July 1.

The opening was created when Superintendent Kimberly Merrick resigned in October 2019 for personal reasons, after a 15-month tenure. She was being paid $130,000 for her first year of what would have been a three-year contract.

Cameron extended his initial per-diem, three-day-a-week contract that would have ended June 30, after a search for Merrick’s successor hit a dead end. The search yielded two finalists, but neither was chosen by the School Committee at a meeting in March, just as the coronavirus pandemic emerged full force in the U.S.

Lenox has had five superintendents, not including interims, since 2007. Typically, superintendent contracts run for three years, but school and town officials have voiced the hope for a longer commitment from the next district leader.

Now, the town joins at least a half-dozen communities across the state, including Pittsfield, searching for a school district leader through the Massachusetts Association of School Committees and other providers that assist in locating candidates. 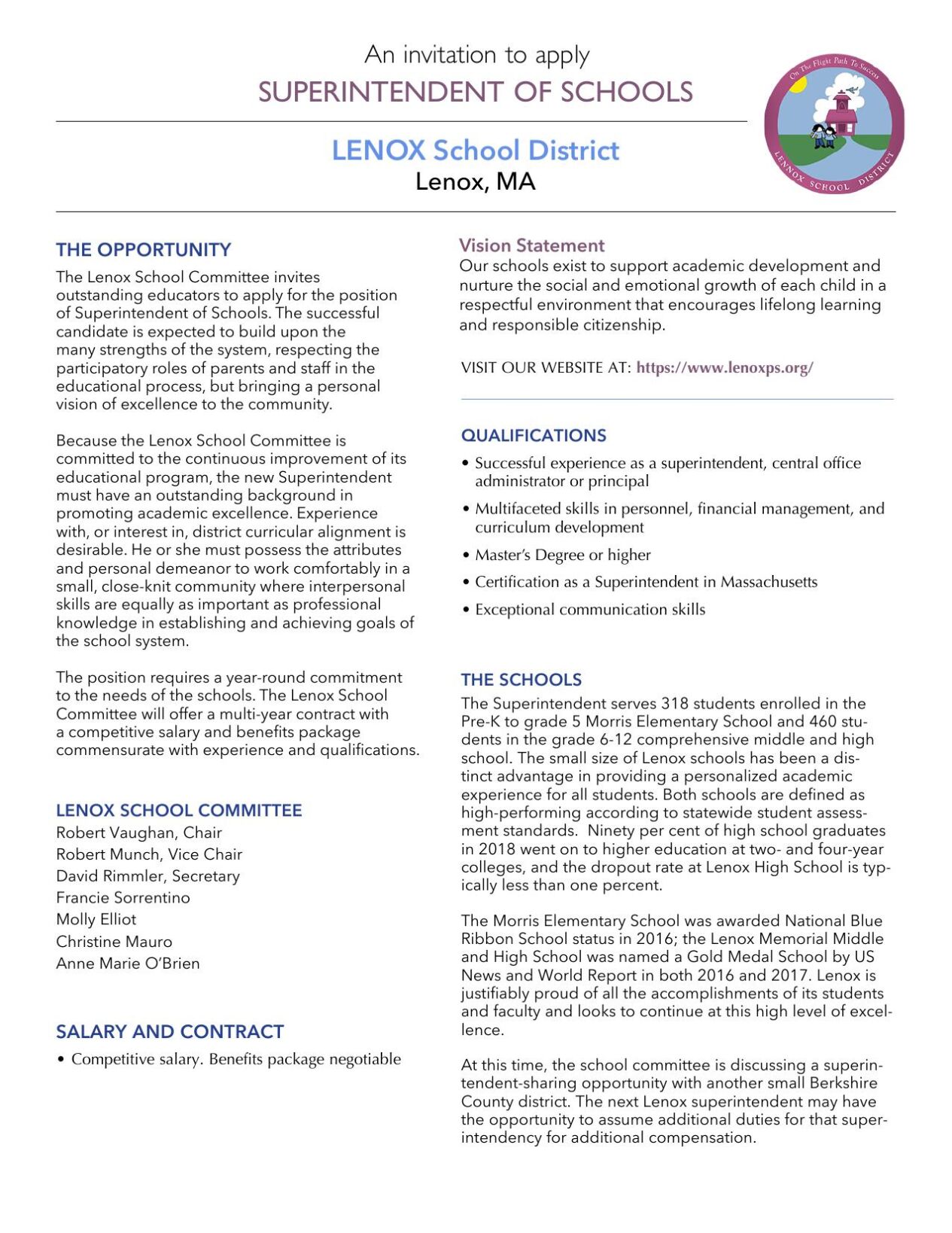 The new job posting calls for these qualifications:

• Successful experience as a superintendent, central office administrator or principal;

• Certification as a superintendent in Massachusetts;

The salary is described as competitive, with the benefits package negotiable.

The ad notes that 460 students are enrolled in Lenox Memorial Middle and High School, with 318 in prekindergarten through fifth grade at Morris Elementary School. The schools are defined as high-performing, according to state student assessment standards.

Morris was awarded National Blue Ribbon School status in 2016; LMMHS was named a Gold Medal School by U.S. News & World Report in 2016 and 2017.

The current search group made up of Vaughan and School Committee members Robert Munch and Anne Marie O’Brien chose MASC after hearing presentations from that group and the New England School Development Council, another vendor.

“MASC seemed to have much more recent and more robust experience with searches during the COVID-19 time frame,” Vaughan explained.

The deadline for applications is Nov. 30, he said. The search subcommittee will review them, with MASC support, to determine semifinalist candidates.

Interviews will be scheduled for December, with finalists selected in January. Recommendations by the search group to the full School Committee might be available soon thereafter.

“We’re moving in a good direction, and we’ll hopefully have some great candidates and some good news for the school community and the town within two to three months, let’s say,” Vaughan predicted.