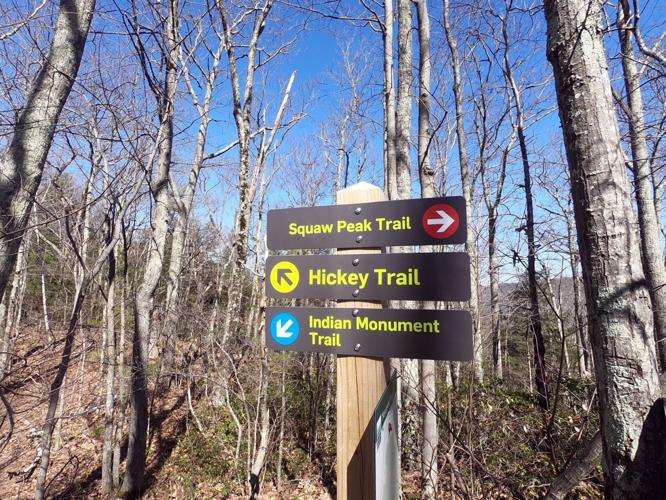 Trail signs on Monument Mountain will look different this month. The Trustees of Reservations is changing Squaw Peak and Indian Monument Trail to Peeskawso Peak and Mohican Monument Trail, respectively, after ongoing discussions with the Stockbridge-Munsee Community Band of Mohican Indians. 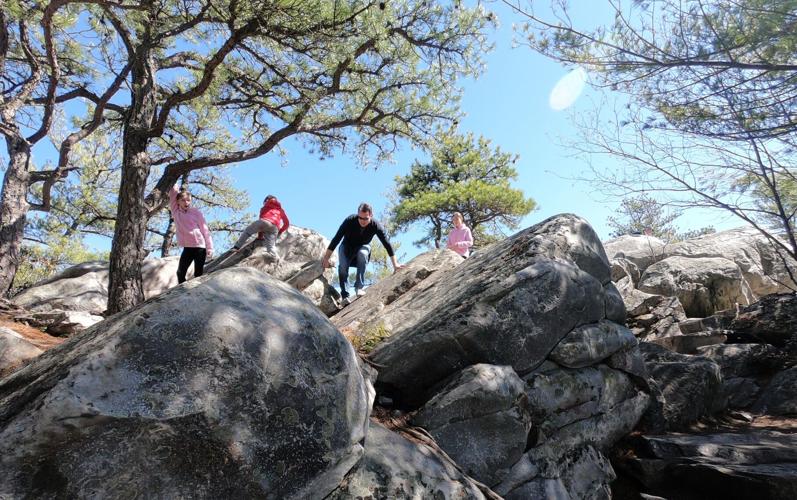 A family explores the summit of Monument Mountain last month. Monument is a 1,642-foot-high summit of quarzite rock, sharp ledges and cliffs, and a forested trail network off Route 7. More than 20,000 people hike the mountain every year.

GREAT BARRINGTON — Like most of the Berkshires, Monument Mountain was one of the Mohicans’ sacred sites, with a structure of ceremonial offering stones that historical accounts centuries ago say was 6 feet tall and 18 feet wide.

That was destroyed after the tribe, which lived in the area around Stockbridge, was forced out of its homeland. Soon, the mountain would be viewed through the perspective of those who arrived to these lands much later.

Yet, the area, and the mountain, always remained sacred.

In an attempt to honor this, The Trustees of Reservations, which owns and manages the mountain, has renamed Squaw Peak — its most popular hiking destination. It now is known as Peeskawso Peak, which, in Mohican, means “virtuous woman.”

The new trail signs will be placed by the end of April, and the Trustees and the Stockbridge-Munsee Community Band of Mohican Indians are continuing to work together on signs that explain the history and significance of the mountain to the tribe. Those interpretive panels should be completed by the end of April.

Monument is a 1,642-foot-high summit of quarzite rock, sharp ledges and cliffs, and a forested trail network off Route 7. More than 20,000 people hike the mountain every year.

The sign changes are “long overdue,” said Brian Cruey, director of the Trustees’ Southern Berkshires properties, and were made after deep consultation with the tribe, whose base is now in Wisconsin but for whom the area is considered a “homeland.”

“They have felt that we need to do a better job of telling that story, and we are really open to that,” he said.

Bonney Hartley, the tribe’s historic preservation manager, said the changes were approved by the tribe and its council, and that it eases a long-held disappointment and discomfort from tribal members who would visit the sacred site to find it tainted by words like “squaw” and “Indian.”

“There are various historical accounts of it from the 1700s as a ceremonial offering place,” she said, noting the continued ritual of praying into a stone before it is placed.

That’s why the term “squaw” was so disheartening, she said. “An ethnic and sexist slur,” said a statement from the Trustees on Thursday.

Hartley said that the word itself isn’t offensive, but that its use has, over time, transformed it into one.

Heather Bruegl, the tribe’s director of cultural affairs, said the renaming is a “great honor” and sets history right.

“It gives us an opportunity to correct the historical narrative,” she said.

Enter the famous picnic had by Nathaniel Hawthorne and Herman Melville on the mountain in 1850; it is this “one day” in history that framed much of the mountain’s lore and wiped out the Indigenous perspective, Hartley said.

“Thousands of years; not just one day,” she added.

Cruey said the Trustees are grateful to the tribal community for helping the group “set the record straight.”

The Trustees, which preserves and conserves 120 sites across the state, also has reframed the narrative of The Mission House in Stockbridge. The home was built by the Rev. John Sergeant, who began a religious mission to convert the Mohicans.

The property, a National Historic Landmark, became a museum — through Sergeant’s eyes. The tribe suggested a shift, and it now holds a display of writings by tribal members describing their own history. Also, the Trustees have deaccessioned tribal objects, Cruey said.

The Trustees is examining all of its sites to ensure that its names and interpretations reflect the wholeness of history, diversity and cultural significance, Cruey said.

The U.S. replaces the word 'squaw' at nearly 650 sites. Will a Great Barrington street be next?

If Squaw Peak Road is renamed, Great Barrington will have again rid itself of a place name considered offensive. Town officials plan to tackle this next month.

Great Barrington officials have agreed to change the name of a road that previously bore a term offensive to Native Americans.