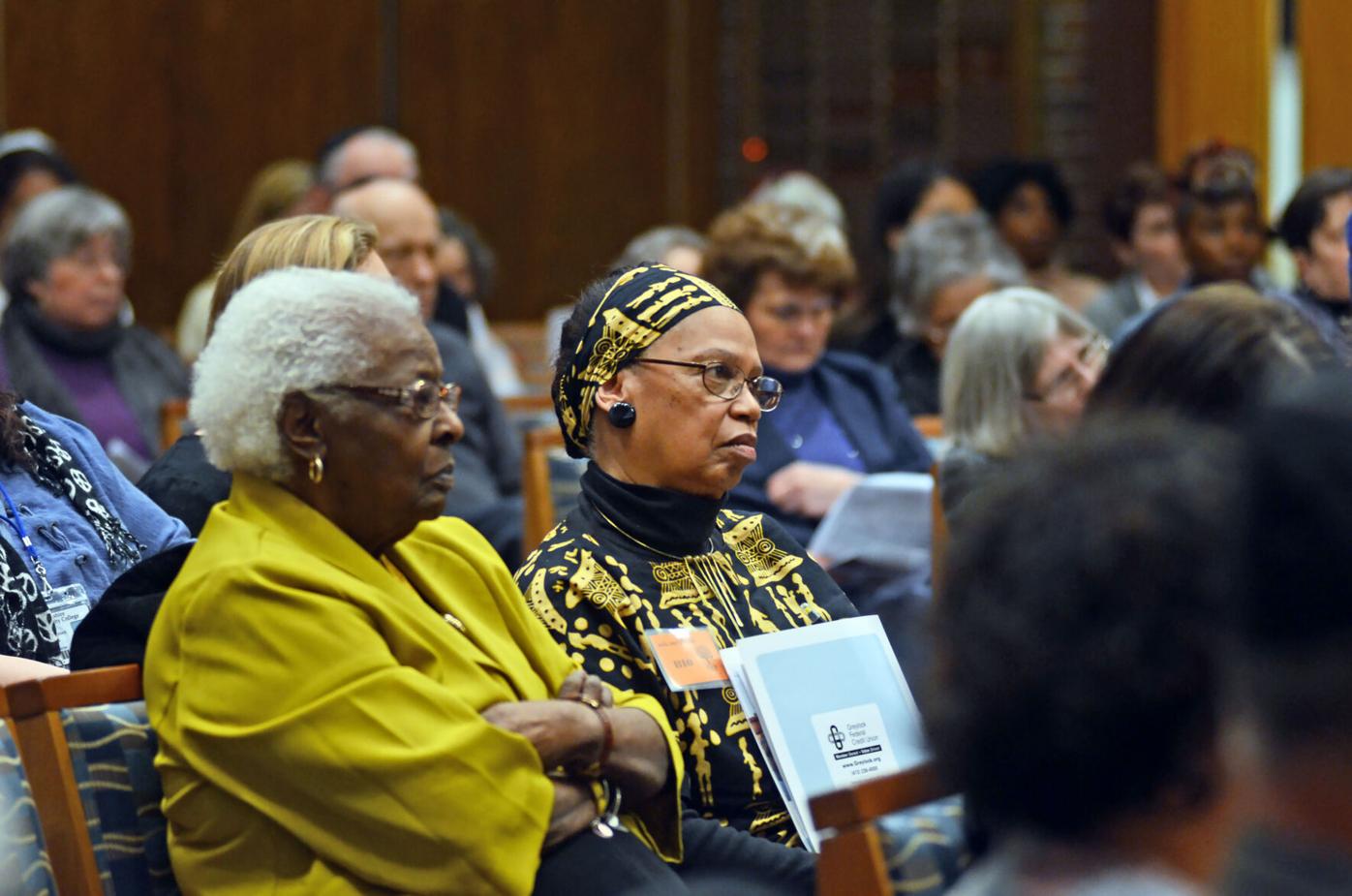 Mabel Hamilton, left, and Wes Gadson listen to a speaker while waiting to get up and speak to the group about racial justice, during the Berkshire Interfaith Organizing 2019 annual convention held at Congregation Knesset Israel in Pittsfield. Hamilton died Monday at age 88. 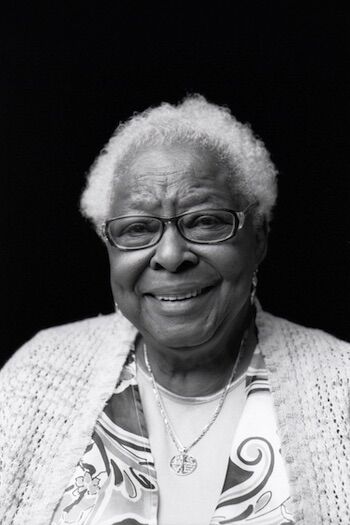 Mabel Hamilton died Monday, at age 88. She was known for her mentorship and duty to others.

Mabel Hamilton, left, and Wes Gadson listen to a speaker while waiting to get up and speak to the group about racial justice, during the Berkshire Interfaith Organizing 2019 annual convention held at Congregation Knesset Israel in Pittsfield. Hamilton died Monday at age 88.

Mabel Hamilton died Monday, at age 88. She was known for her mentorship and duty to others.

PITTSFIELD — The community is mourning the loss of a cherished leader, a woman whose commitment to lifting up others was matched, and compelled, by her faith.

Mabel Hamilton died Monday, at age 88. She was known for her mentorship, duty to others and gift of song.

“Mabel was a very caring, very giving, very political person, and she wanted equality and justice,” said Dennis Powell, president of the Berkshire County branch of the NAACP. “We truly have lost our matriarch of the Black community.”

Hamilton’s passing has left Powell with a heavy heart, yet a sense that she has moved on to well-deserved rest, he said. She was a mother of five who possessed an abundance of love and forgiveness, and kept her phone close by because she was there for “whoever needed her, at any time any day,” one of her children said.

“She was a phenomenal woman, she always took the time — she would never not take the time, no matter who, no matter what their flaw was,” said daughter Julie Davis. “She would find the good in them, and she would pray for them. That’s just who she was.”

Hamilton, also a member of the NAACP, was honored by the organization with an award whose namesake was one of her heroes, Powell said, the first Black woman elected to Congress and presidential candidate, Shirley Chisholm.

As a girl, Hamilton moved from her hometown of Mechanicville, N.Y., to North Adams, and would go on to describe in an interview she gave later in life as part of the NAACP Oral History Project being the only African American student in her childhood classroom.

She moved to Williamstown, the project reported, where she saw the Rev. Martin Luther King Jr. speak — an event that would alter the course of her life, said Robert Hamilton, another of her children.

“It’s not too often in life that someone moves you to action, and that spurred her to action for the next 50 years,” he said.

When King was assassinated in spring 1968, Hamilton, then a young mother, dropped to her knees, she told the oral history interviewer.

“‘I’ve got to do something to make a difference,’” Hamilton recalled thinking. “And so I made the decision to move to Pittsfield.”

In Pittsfield, Hamilton worked to connect families with the local Head Start and Follow Through, programs supporting underserved children and their families. Through addressing educational opportunity gaps, Robert Hamilton said, the programs were designed to help overcome prejudice and discrimination, aligning with Hamilton’s social justice work.

Hamilton believed in the power of community organizing, Powell said, and commanded respect through her actions. The love she felt for those she met was unquestionable, he said, but she wasn’t shy to state frankly when she thought someone was headed down the wrong path.

Hamilton was a tremendous woman with a huge heart, said Shirley Edgerton, and was someone who cared deeply about, and advocated for, the needs of young people. She was affiliated with a number of community-based organizations, launching Action for Opportunity, a local employment training initiative, with the late Rev. Willard Durant of Price Memorial AME Zion Church.

Edgerton got to know Hamilton well while the two served on the board of the Westside Neighborhood Resource Center, and she gravitated toward Hamilton’s spirituality and faith. Hamilton took Edgerton under her wing. Their relationship bloomed into a mentorship, with Hamilton teaching her strategies of community organizing.

“She really taught us how to be conscious of our biases, and before diversity, I think, became such a popular rhetoric, she encouraged us around the issue,” Edgerton said. “She also taught us about loving ourselves, knowing our history, honoring our history, and knowing that we stand on the shoulders of our ancestors and we have a purpose for being here.”

Edgerton, who serves as Diversity, Equity and Inclusion coach for Pittsfield Public Schools, recalls the early 1990s, when Hamilton and Durant said the time had come to “pass the mantle” on to Edgerton.

Initially reluctant, Edgerton would go on to follow a like-minded path of supporting young people, launching the Women of Color Giving Circle and the Rites of Passage and Empowerment — ROPE — program, which today awards the Rosemary Durant-Mabel Hamilton Scholarship to college-bound young women of color, in her name.

“As much as I consciously fought it, I knew unconsciously that part of my purpose on this planet, because of the way I engage with young people, was to help them transition to safe and healthy and successful adults,” Edgerton said.

Hamilton was a mentor to Powell, too, and was guiding the community leaders as they sought advice as recently as three weeks ago. One of Hamilton’s children, the late Valerie Hamilton, was “the epitome of” her mother when it comes to dedication to service.

The weight that Hamilton carried in the community is evidenced by how she is known to others. Powell called her Queen Mother, in reference to female elders in Africa. To Edgerton, she was Sister Hamilton; to others, Edgerton said, she was Mother Hamilton.

Hamilton and her family were members of Price Memorial AME Zion Church for decades, with Hamilton serving over the years as the congregation’s Sunday school superintendent, deaconess, director of Christian outreach services and lending her unforgettable vocals to the church choir.

Her voice, Robert Hamilton said, was a gift to those who heard it, all in itself, and her songs were broadcast over the radio at a time when singers of color rarely were played. When he describes his mother to people from out of town, he explains how her voice reached those in mourning, and the joyous.

“She sang at 90 percent of the funerals and 90 percent of the weddings in the community, and when you are there for those kinds of sacred events, you develop a really strong bond with people, with families,” he said.

Powell remembers a song that Hamilton sang at the funeral of his late wife, who was Hamilton’s dear friend.

“‘If I can help somebody as I pass along this way, if I could help somebody to a brighter day, then I know my living has not been in vain,’” he said, quoting from the song’s lyrics.

“That’s truly what Mabel was,” he added.