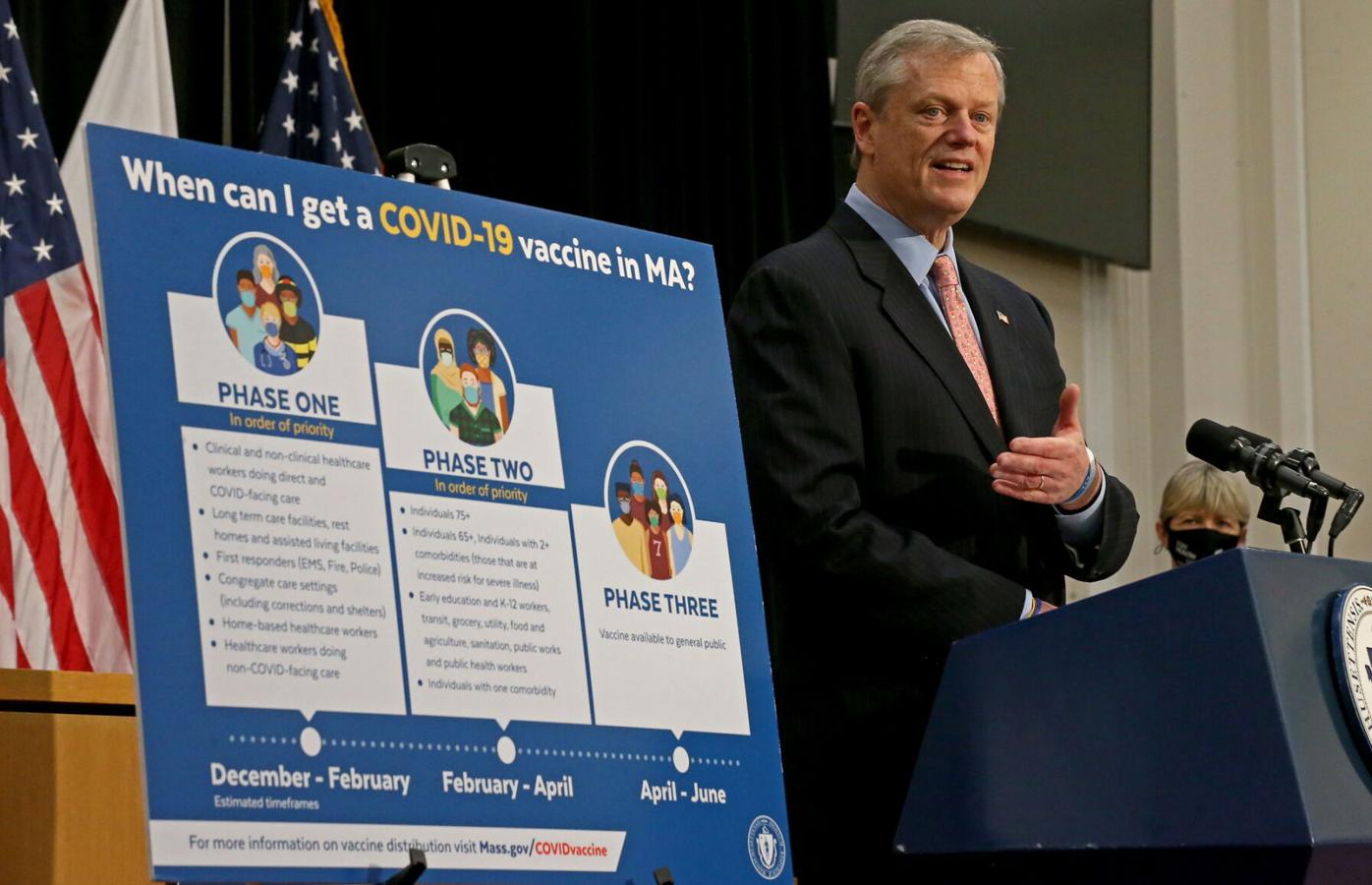 Gov. Charlie Baker explains the revised COVID-19 vaccination distribution plan Monday during a news conference at the State House. Baker will give his State of the Commonwealth address on Tuesday night. 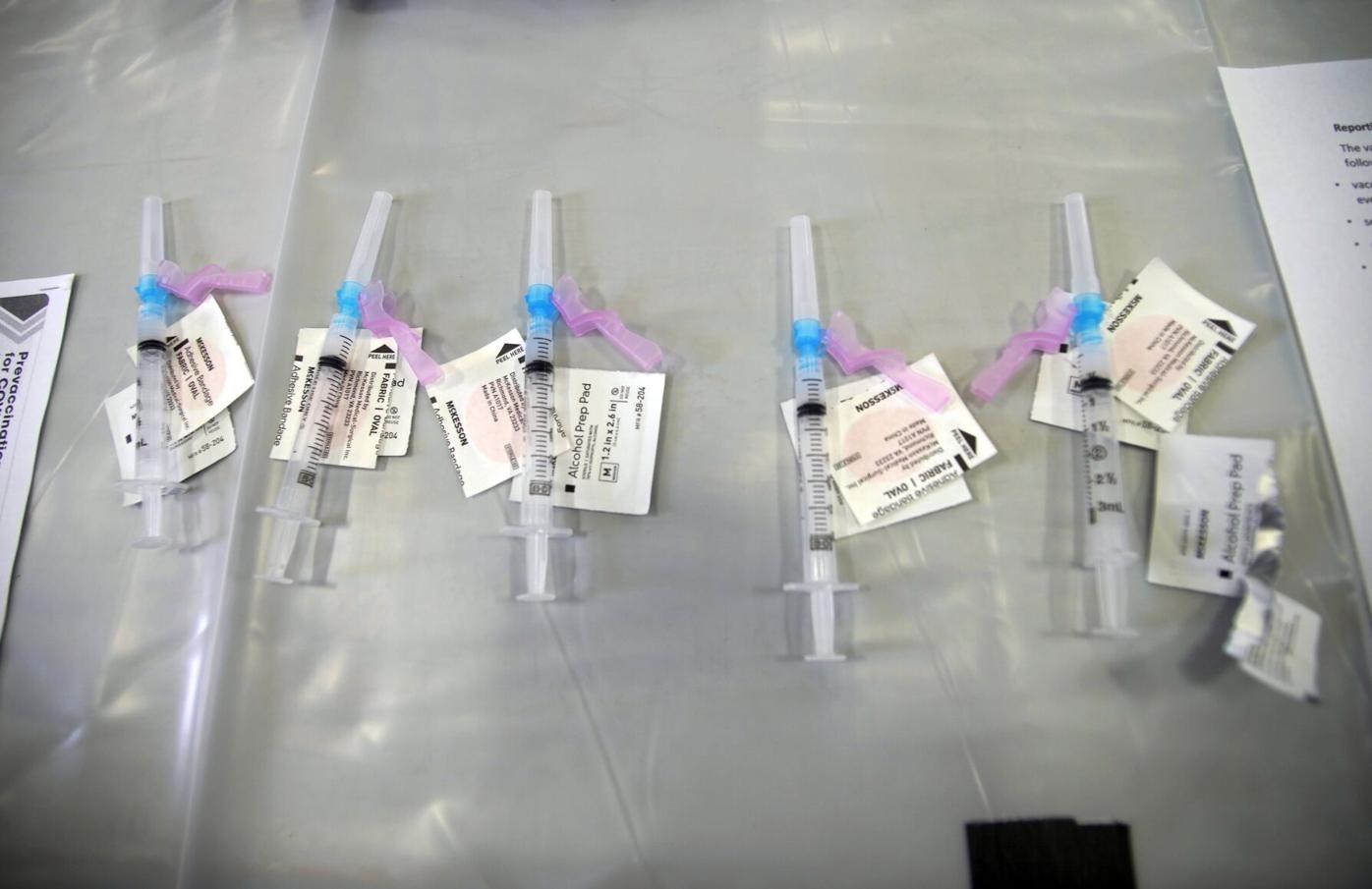 Gov. Charlie Baker explains the revised COVID-19 vaccination distribution plan Monday during a news conference at the State House. Baker will give his State of the Commonwealth address on Tuesday night.

One week ahead of the start of Phase Two, Gov. Charlie Baker said he also would change the state’s timeline to move residents 65 and older higher in priority.

Phase Two sign-ups for people 75 and older will begin online as soon as Wednesday at mass.gov/COVIDVaccine, according to the governor. Residents ages 65 to 74, and those with two or more comorbidities, are expected to become eligible later in February, though the exact date depends on federal vaccine supply.

Berkshire County public health officials said registration for local clinics will begin this week and that they would share more details in the next couple of days.

The timeline shift means that essential workers, such as educators and grocery store employees, now will fall below seniors older than 75 on the state’s priority list. It also means that people with two or more comorbidities will not be eligible immediately at the outset of Phase Two, as previously expected. Individuals with one comorbidity still will be eligible at the end of Phase Two.

The rate of vaccinations will depend on the availability of doses from the federal government, and Baker warned that supply continues to be one of the most constraining factors in the state’s ability to vaccinate more people.

By the end of the week, the state will have more than 100 public vaccination sites open at pharmacies, retail chains and other providers — an infrastructure capable of administering nearly 250,000 doses per week. The number of vaccine clinics is expected to grow to 165 by mid-February, with the capacity to administer more than 300,000 doses per week.

Berkshire County health officials have said they expect to have the capacity to vaccinate at least 3,000 people per day at three large-scale clinics across the county, if supplies become available.

But, the state does not expect to be able to vaccinate at maximum capacity unless the federal government begins to ship doses to Massachusetts at a higher rate.

“We’re setting up the capacity to administer far more doses than we are currently receiving or are projecting to receive from the feds,” Baker said. “What this means is, if we continue to get the same number of doses that we’re getting now, we may end up with some empty seats and empty appointments at some of our sites. But, we think it’s better to over-plan at this point in the process, and hope that the feds can get there, than to under-prepare.”

President Joe Biden has set a goal of administering 100 million doses of vaccine nationwide in his first 100 days, but Baker said the state, so far, has not been told yet to expect to receive more than its typical allotment of 80,000 doses per week.

Baker held a news conference at the Statehouse to update the state’s vaccination plan after a weekend in which his administration faced criticism from public health and political leaders worried that the state’s vaccine program was lacking.

Senate President Karen Spilka, in an interview that aired on WCVB on Sunday, said the state’s phased approach was confusing to some people, and she called on the administration to share more information about when and where people can expect to be vaccinated.

According to the state, as of this weekend 876,125 doses had been shipped to pharmacies and other providers in Massachusetts, and 448,982 first and second doses of vaccine had been administered. Data collected by the Centers for Disease Control and Prevention put Massachusetts 28th in the country for doses administered per capita, behind New York and all five other New England states.

The state’s decision to prioritize people 65 and older stems from a CDC recommendation this month to move the elderly ahead of other groups. As he announced the change, Baker addressed criticism that Massachusetts has been slow to start getting the vaccine to older residents, as vaccinations for the elderly already have kicked off across the country.

“I get the fact that, by choosing a number of very targeted communities and populations that we thought we should start with, that would create a slower rollout and a slower ramp-up than you would see where you just took big groups by age and said, ‘Go,’ “ Baker said. “But, I do believe at the end of the day we made the right decision out of the gate.”

The state, though, is making some adjustments to its vaccine distribution to speed the rate of administration, including halting deliveries of new vaccine this week to hospitals in order to force them to use the supply they have.

State Secretary of Health and Human Services Marylou Sudders said all providers have been notified that they have 10 days to administer vaccine once it has been delivered, or the state will redistribute the doses.

Sudders also said the state has “pulled back” 20,000 doses from the federal pharmacy program targeting nursing homes and congregate care facilities and will redirect those doses and 17,500 each week for the next several weeks to CVS and Walgreens retail locations.

As of Jan. 19, 300,000 Massachusetts doses had been allocated to the pharmacy partnership program, but only 80,000 doses had been administered. Officials blamed the federal program and its rules for distribution for some of the state’s overall lag in vaccine administration.

The state encouraged people in Phase Two to check mass.gov/COVIDVaccine to see whether they are eligible. If eligible, they can go to mass.gov/COVIDVaccineMap to find a clinic, sign up for an appointment and fill out the state’s eligibility self-attestation form. Local health officials say they will provide a phone number for anyone who does not have a computer or phone to register on.