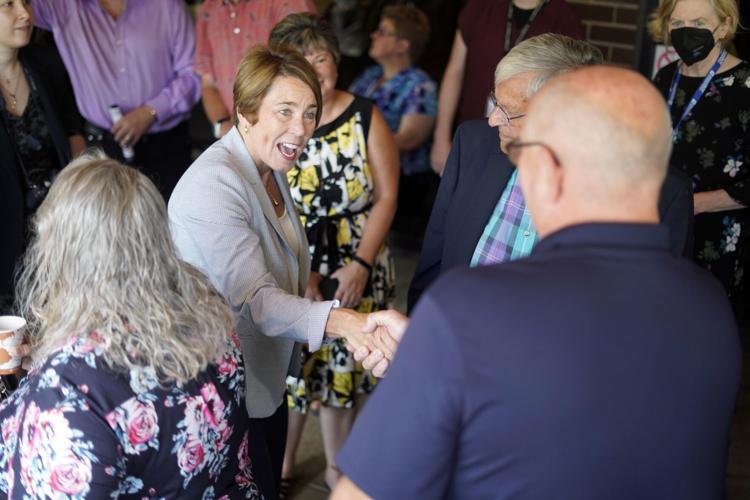 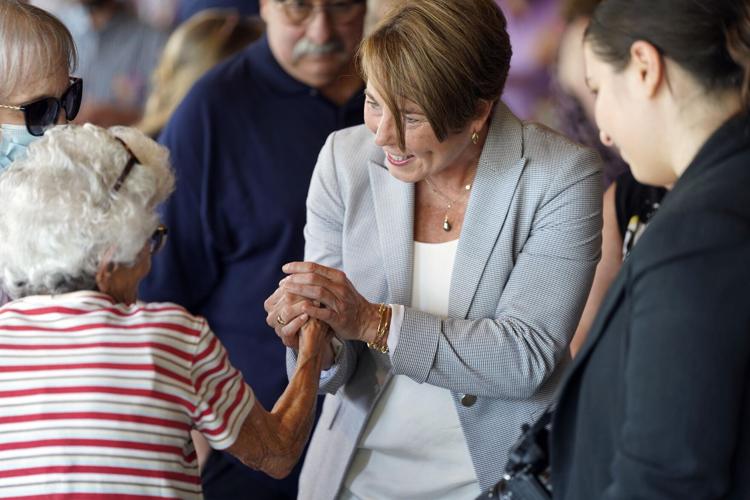 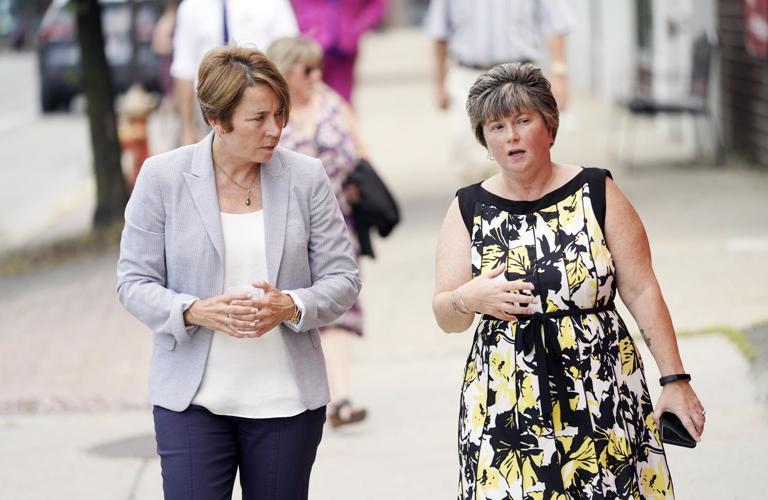 Healey, the state’s attorney general, is a Democratic candidate for governor in November’s election.

Speaking to a crowd Thursday morning in North Adams, Healey highlighted housing and transportation as key issues in her campaign. She will face either Geoff Diehl or Chris Doughty in the general election, depending on which of the Republicans wins a Sept. 6 primary. Healey’s primary opponent, Sonia Chang-Diaz, dropped out of the race.

“We’ve got a crisis when it comes to both,” Healey said of housing and transportation.

“I also know that there’s too much of a Boston-centric mentality. And the needs we have for housing and transportation in the greater Boston area are different than what we need to do here in North Adams and in Pittsfield and in Berkshire County,” Healey said. She expressed support for investing in regional transit authorities and the advent of east-west passenger rail service.

Some wore pins that declared “my governor is a baller.” Healey was co-captain of the women’s basketball team at Harvard University and played professionally in Austria for two years.

Healey said she sees the Berkshires as a leader in developing the arts and tourism sectors across the state. “Massachusetts, we can be competing a lot harder when it comes to being a leader in arts and culture and hospitality,” she said. “And this is a region that can drive that, I know, and can drive jobs and opportunity along with that.”

If elected to the top state office, Healey pledged to continue working to advance the Berkshires. She touted work she has done in North Adams and the Berkshires, like a visit to Drury High School as part of an anti-gun violence prevention program, funding a summer youth job initiative and ensuring that money her office got from opioid manufacturers is going toward funding prevention and recovery.

“We fought utilities as they tried to jack up rates, most recently fighting Berkshire Gas’ efforts to try to raise the rates of 40,000 people. That’s meaningful,” she said, referencing an agreement her office made with Berkshire Gas in 2018 to lower proposed rates and halt rate increases for several years. 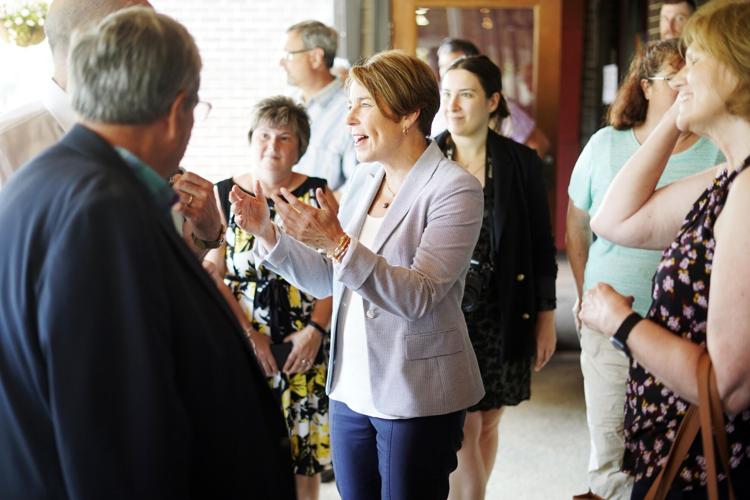 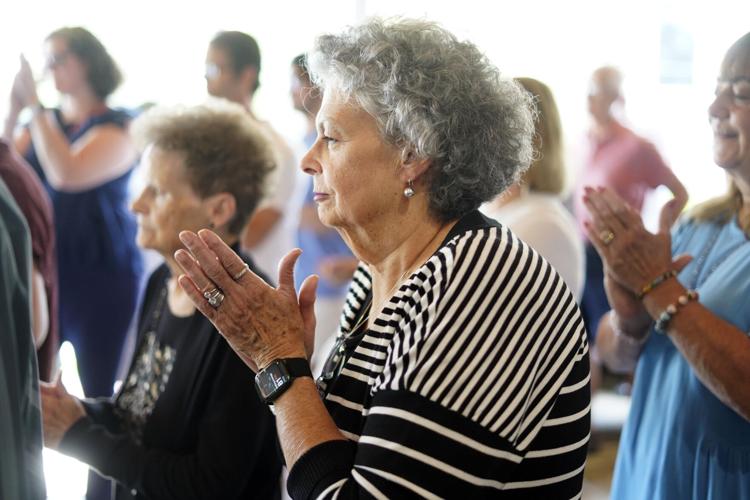 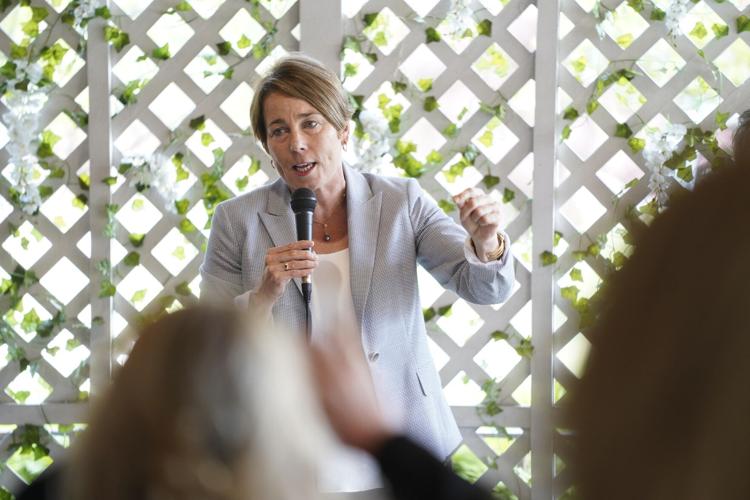 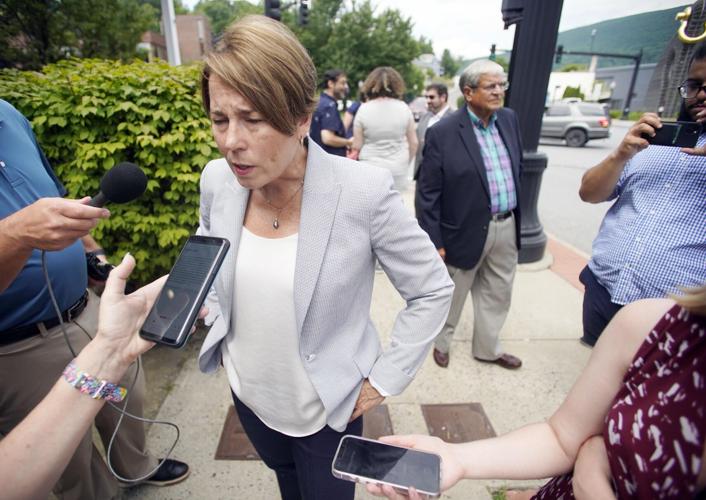 After her remarks to the crowd, Healey spoke with reporters, elaborating on her plans to address transportation and housing.

“We’ve got to increase housing, we’ve got to enforce 40B,” she said, referring to an affordable housing state statue. “We’ve got to change some of our zoning to make sure that that housing is being produced.”

On Thursday afternoon, Healey traveled to the First United Methodist Church of Pittsfield, where she heard more about housing issues facing the Berkshires from a panel of people who work on housing, legislators, and city leaders, including Mayor Linda Tyer.

Berkshire Housing Development Corp. & Housing Services has about 1,000 units and 3,000 people on the waiting list, Eileen Peltier, its president and CEO, told Healey.

“Housing needs to be at the top of the list of priorities if we are going to succeed and thrive as a community,” Peltier said.

Justine Dodds, director of Pittsfield’s Department of Community Development, spoke about the importance of preserving existing housing stock and of challenges the city has with empty properties. There are 77 vacant buildings in the city, she said.

The church where the group gathered is set to help alleviate some of the city’s emergency shelter needs. In the basement of the building, Healey toured space that will become the Fenn Street Shelter. When it opens, it will have 45 emergency and overnight beds. Tyer recently announced that the project, expected to be done by November, will receive $345,000 in American Rescue Plan Act funding.

“I leave here having learned a great deal, and also ready to go and try to work on some of the things that we talked about,” Healey told reporters after the meeting, pointing to the importance of supporting existing housing programs and finding ways to boost housing stock.

Bill Everhart: Keeping up with campaigning in the commonwealth

A few observations on state politics and government as the Sept. 6 primaries begin to appear on the horizon.