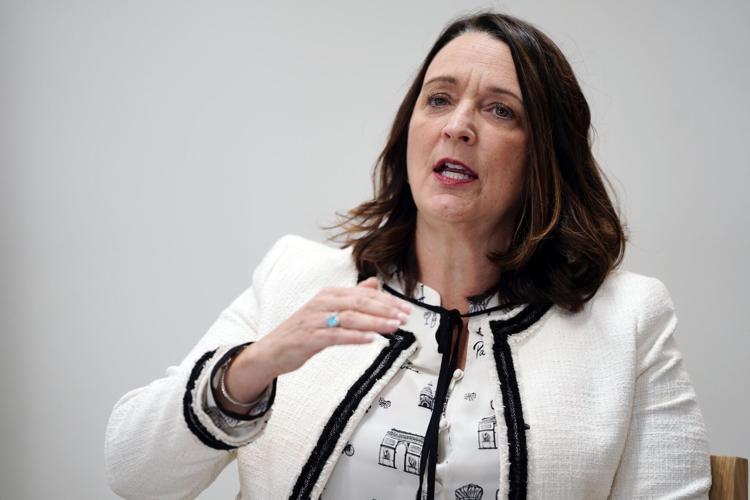 Linda Tyer, mayor of Pittsfield, speaks about her administration's approach to the issue of homelessness in an editorial board meeting at The Berkshire Eagle. 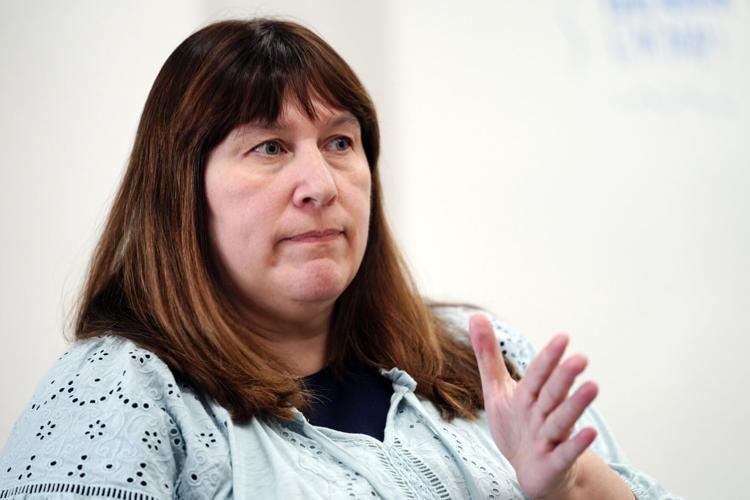 Erin Forbush is ServiceNet's director of shelter operations. “Not everyone is walking in looking for housing,” Forbush said of the St. Joseph's Shelter. “Housing is an end result that we have, but there are so many things to work on first.” 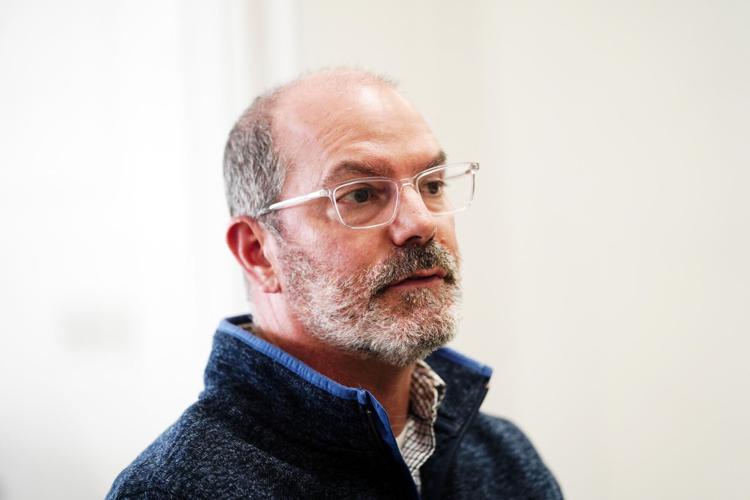 Jim McGrath is Pittsfield's park, open space and natural resource program manager. McGrath said he and his team have a tagging system that allows them to reach out to people living in the parks — and offer resources to them. 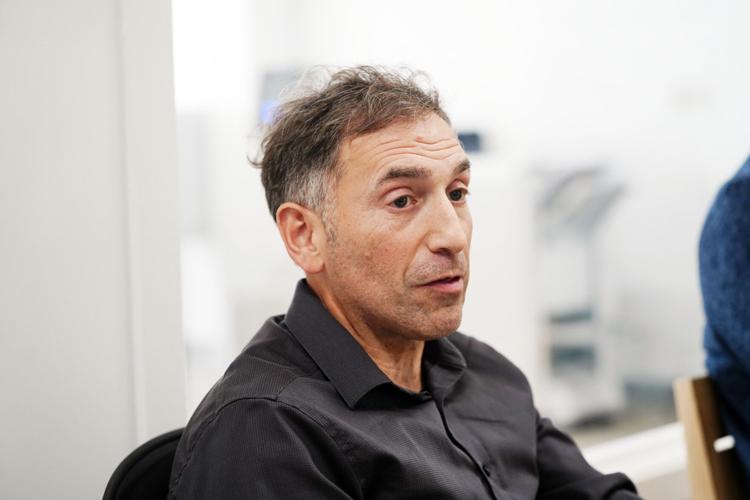 Brad Gordon is executive director and staff attorney for · Berkshire County Regional Housing Authority. “It’s really a fundamental issue of the right to self-determination,” he said. “It’s what we would all want for ourselves, and it’s easy to forget that when people are disenfranchised. These folks can be the most disenfranchised, a lot of times.” 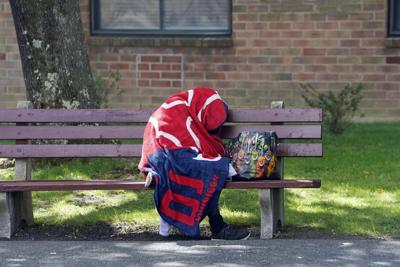 PITTSFIELD — As talk about homelessness in Pittsfield continues, Mayor Linda Tyer and her community partners know where they stand.

The idea is this: Be flexible. And work at it every day.

“Part of the challenge that we all face is that it literally evolves every day,” Tyer said. “Every day, we have to tweak and tinker and fix and think about the individual situation that’s in front of us.”

In an editorial board meeting Thursday with The Berkshire Eagle, city leaders discussed actions being taken daily to confront the issue.

It was a group similar to that which gathered last month for the city’s public forum on homelessness, prompted in part by homeless people living in Springside Park and an increase in panhandling.

As long-term solutions take shape, the group’s message Thursday was that steps are continually taken to assist homeless residents in the city.

Those efforts may take the form of ServiceNet crews staffing St. Joseph’s Shelter and doing street outreach. Or organizations like Habitat for Humanity, Berkshire Harm Reduction and the Berkshire Community Health Programs van stopping by the Berkshire Athenaeum once or twice a month.

Mayor Linda Tyer says officials hear residents' complaints about pandhandling in Pittsfield. But there's little they can do

There are also programs for people with specific life experiences, like how Second Street Second Chances is helping those formerly incarcerated find housing. Similarly, Soldier On provides housing for military veterans.

Social service providers play a major role in helping to address homelessness. Once planned new housing units are built, their work will continue.

Erin Forbush, director of shelter operations at ServiceNet, said the need for services has increased since the pandemic began. The number of residents in St. Joseph’s Shelter, the city’s only emergency shelter, has remained between 40 and 50 residents year-round.

As winter months approach, ServiceNet will expand its operations. This will be the shelter’s first year staying open 24 hours to provide residents with a daytime place to stay.

They contend with bad plumbing, a leaky roof and bedbugs. How they carry on at St. Joe's Shelter

Part of the shelter’s function is to help provide stability, so people can thrive in new housing, Forbush said. When people arrive at the shelter, they may be dealing with “generalized trauma.”

Establishing a connection with those living in the shelter is key to that, she said. As her team works with residents, they shape a goal. It’s often not as simple as getting people housed, she said.

“We’re using what we think is stable and settled,” Forbush said. “We’re using it from the vantage point and linear path that many of us have taken. We just have to rethink and reframe what it is for that person, because my comfort level is very different than somebody else’s.”

The shelter provides support in a setting residents can call home, at least for a while.

“Not everyone is walking in looking for housing,” Forbush said. “Housing is an end result that we have, but there are so many things to work on first.”

However, for those hoping to get referrals to permanent housing, Forbush said available units have become difficult to come by. In 2020, she could secure housing for around 60 to 100 residents living at St. Joseph’s Shelter in a year. This year, she won’t get close to that number. Whether it’s increases in rent or hesitancy by landlords, the units simply aren’t there.

Forbush said that ServiceNet works to maintain housing for people who receive it, a task that sees them developing a relationship with landlords and helping residents achieve stability in a new space.

A number of homeless residents choose not to stay in shelters, or are removed if they refuse to follow guidelines. Some end up on the street, and others in the city’s parks.

Jim McGrath, who serves as park, open space and natural resource program manager for the city, said he and his team have a tagging system that allows them to reach out to people living in the parks — and offer resources to them.

McGrath and his team regularly check in on people living in the park to ensure they’re okay, and provide a few basic items. It also helps maintain the cleanliness of the parks.

“We’ve got a sort of system set up to make certain that things are hygienic and clean for them,” McGrath said. “Even dropping off garbage bags … it’s a big offer to them.”

McGrath said he no longer fields calls about encampments in city parks, but did at one point during the pandemic. His approach, and that of the city, is based on compassion. He’s not going to kick people out of the parks unnecessarily, and wants to make sure they’re safe.

“That’s the fine line between the community expecting us to do something about this,” Tyer said. “We are, and we’ve also made a commitment to respecting the choices that people are making for themselves and their right to decide for themselves where and how they want to live.”

Part of that effort includes handing out fire safety materials. Once winter sets in, people may find themselves tending an open fire to stay warm. A recent fire at Springside Park, which was put out in part by homeless residents living there, highlights the importance of the information, he said.

Before city crews arrived, these people stepped up to combat a fire at Springside Park

Forbush and Brad Gordon, executive director and staff attorney of the Berkshire County Regional Housing Authority, said people must be allowed to make their own decisions on where they stay.

“It’s really a fundamental issue of the right to self-determination,” Gordon said. “It’s what we would all want for ourselves, and it’s easy to forget that when people are disenfranchised. These folks can be the most disenfranchised, a lot of times.”

That’s where flexibility in the city’s plan comes is seen to be key.

“It’s impossible to know or to plan for every scenario because we are dealing with human beings who are in crisis,” Tyer said.

Gordon said a volatile housing market is one cause of the homelessness.

An increase in rent around the country has priced many people out of units they could afford previously — and destabilized low-income households. Gordon pointed to national numbers that indicate over 70 percent of households that pay more than half their income for rent each month were defined as “extremely low income” by the Department of Housing and Urban Development.

“That’s the thing that’s frustrating, that the public doesn’t know,” Gordon said. “People are working on all those things all the time.”

Other issues, including the costs of construction, have made it difficult to increase housing stock. Tyer said it’s not as simple as putting people into empty houses around the city. Many of the vacant buildings are privately owned, she said.

The city has put some of its chips down on a series of projects to provide new affordable housing units.

A project to build housing for homeless residents on West Housatonic Street will provide 28 units. Redevelopment of the White Terrace Apartment buildings will provide 41 units. Zion Lutheran Church will add eight units to the city’s housing supply with a new project.

And a new shelter at the First United Methodist Church will next year provide about 42 beds, replacing St. Joseph’s Shelter, which previously had a capacity of about 50.

These projects are up the road, however. While organizers hope the new shelter will be prepared by spring, ground might not break on the West Housatonic Street units until this time next year.

“It’s going to take not months, but years, to address these challenges,” Gordon said.

“Success is going to be a groundbreaking,” Tyer said. “We’re going to have to take our success in little, small celebrations over time.”

Winning prize for a city lottery? Winner gets to pay $200k for a 3-bedroom house in a quiet neighborhood in Pittsfield

With housing becoming more difficult to find and more expensive to pay for, the city is selling a newly renovated three-bedroom house in a quiet residential neighborhood for $200,000 to a lucky lottery winner.

People living on the streets of Pittsfield want more places to stay and more opportunities to get help. Until they have them, they're relying on each other as much as they can. Eagle reporter Matt Martinez speaks with people finding shelter on North Street doorsteps; inventive people at Springside Park; and a young couple expecting a baby in March who stay warm at the library during the day.