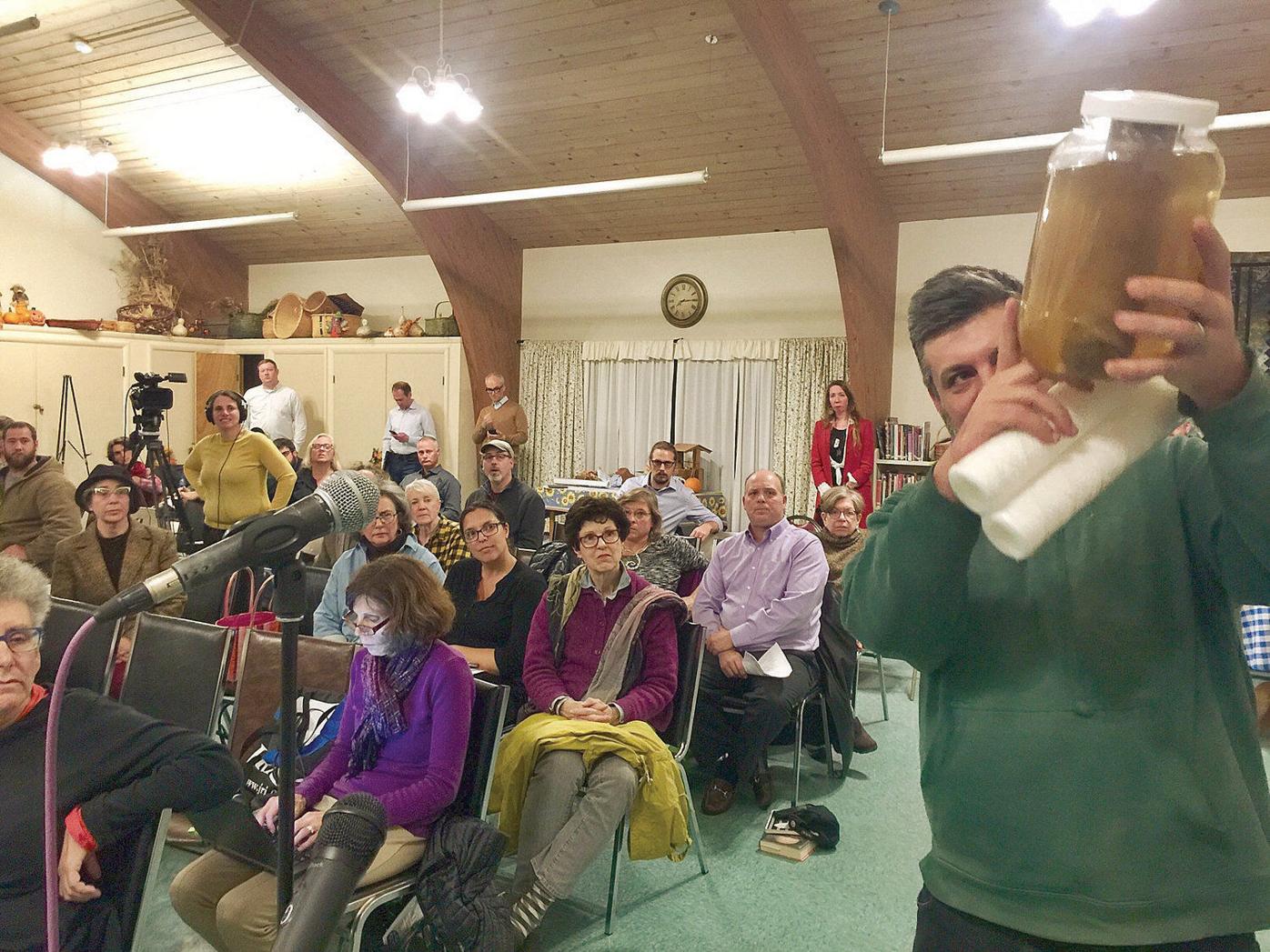 In 2018, Nathan Turner shows the Great Barrington Select Board the water from his home faucet. Customers of Housatonic Water Works say the water increasingly is discolored with rust from the company’s old cast-iron pipes, which leaches into water when the company flushes the system.

A schematic of Housatonic Water Works Co.’s water-treatment system at Long Pond. A new technology in the sand filter tank will remove manganese that is discoloring water.

GREAT BARRINGTON — Housatonic Water Works Co. is proposing a new filtration system that consultants say will rid the network of discolored-water episodes that, for years, have plagued its customers.

In a March 29 statement on its website, the company says it plans to install an “ultrafiltration membrane treatment system” that would address high levels of naturally occurring manganese at Long Pond, the water source.

The decision to purchase and install the $1.7 million system came after consultant Lenard Engineering studied a number of technologies that remove manganese and said this product from Koch Separations Solutions would be most effective for the cost.

Lenard’s vice president, Jim Ericson, said in the statement that the Koch system also would solve other issues at the aging waterworks that would remove more particulates and reduce turbidity.

“Combined with a pre-oxidation step using chlorine, the new filters are expected to remove manganese down to levels where it will not cause noticeable color,” said the statement, which include both consultant reports.

The method first will be tested in a pilot study at the waterworks using smaller equipment, a requirement of the state agencies that oversee the utility. And the Massachusetts Department of Public Utilities would have to approve the cost of the new system, since it would fall to ratepayers. A preliminary estimate pegs that cost at about $15 extra on monthly bills, according to Jim Mercer, treasurer and co-owner of the waterworks.

Mercer submitted Lenard’s feasibility study to the state Department of Environmental Protection, and the agency is reviewing it, he added, noting that regulatory reviews will decide the timing of the installation.

And Mercer says he is hopeful.

“This is a tried-and-true system that has been used throughout the country and in Massachusetts,” he said, adding that it also might reduce the amount of chlorine used to treat the water.

The waterworks will conduct a public information meeting this month.

The proposal comes after several years of heightened frustration and alarm from the company’s customers over periodic episodes of “roily” or discolored water that, at its most extreme, is sometimes the color of tea or coffee.

Public outcry prompted town officials to study a takeover of the waterworks and a merger of Great Barrington proper’s system in order to pay for main upgrades. A 2018 study estimated that replacement of the old mains would cost $22 million.

The problem, which affects some of the company’s 850 households, always was attributed to rust in 19th-century, cast-iron mains that would dislodge during hydrant flushing or other disturbances. The episodes typically happen during warmer weather.

But, last year, a consultant found that the culprit is manganese, at a level that is not unsafe to drink but high enough to tint the water. The threshold for health risk from manganese set by the federal Environmental Protection Agency and the Massachusetts Department of Environmental Protection is 0.3 mg/L, while the highest level found in the Long Pond water is “much less than 0.1 mg/L,” according to the waterworks.

And some manganese released into the system might come from an accumulation of the element on water pipe surfaces, according to the consultant.

DEP officials say that more than a dozen other factors also might be contributing to the problem, and in a Nov. 6 notice to Mercer, the agency detailed a slew of issues that the company must correct in the interest of public health.

The agency noted that plant dates to 1939 and does not meet current state standards.

Mercer said the new equipment would satisfy a number of the DEP’s corrective orders.

The DEP had also said that excessive leaks in the system are costing the Housatonic Water Works Co. and its customers.

Mercer said that the new equipment would not change plans to eventually replace old mains.