DALTON— Rather than hurry to the scene of a reported domestic dispute, a Dalton cop tried to protect a fellow officer’s reputation, a newly filed lawsuit claims, then engaged in a cover-up of actions taken, or not taken, on the night a young woman was found dead.

Patricia Hayes, of Pittsfield, the mother of that woman, filed a federal civil rights lawsuit May 7 in U.S. District Court in Springfield that seeks $3,775,000 in damages.

If police had gone to the woman’s apartment, as police policy dictates in domestic incidents, they might have saved Sherilyn Hayes’ life, the suit claims.

“The Defendants’ actions were grossly negligent and/or recklessly indifferent in denying the Decedent Sherilyn Hayes appropriate care and attention that resulted in her death,” the suit states. “They created the risk of harm … and subsequently conspired to cover up the wrongful acts they committed.” 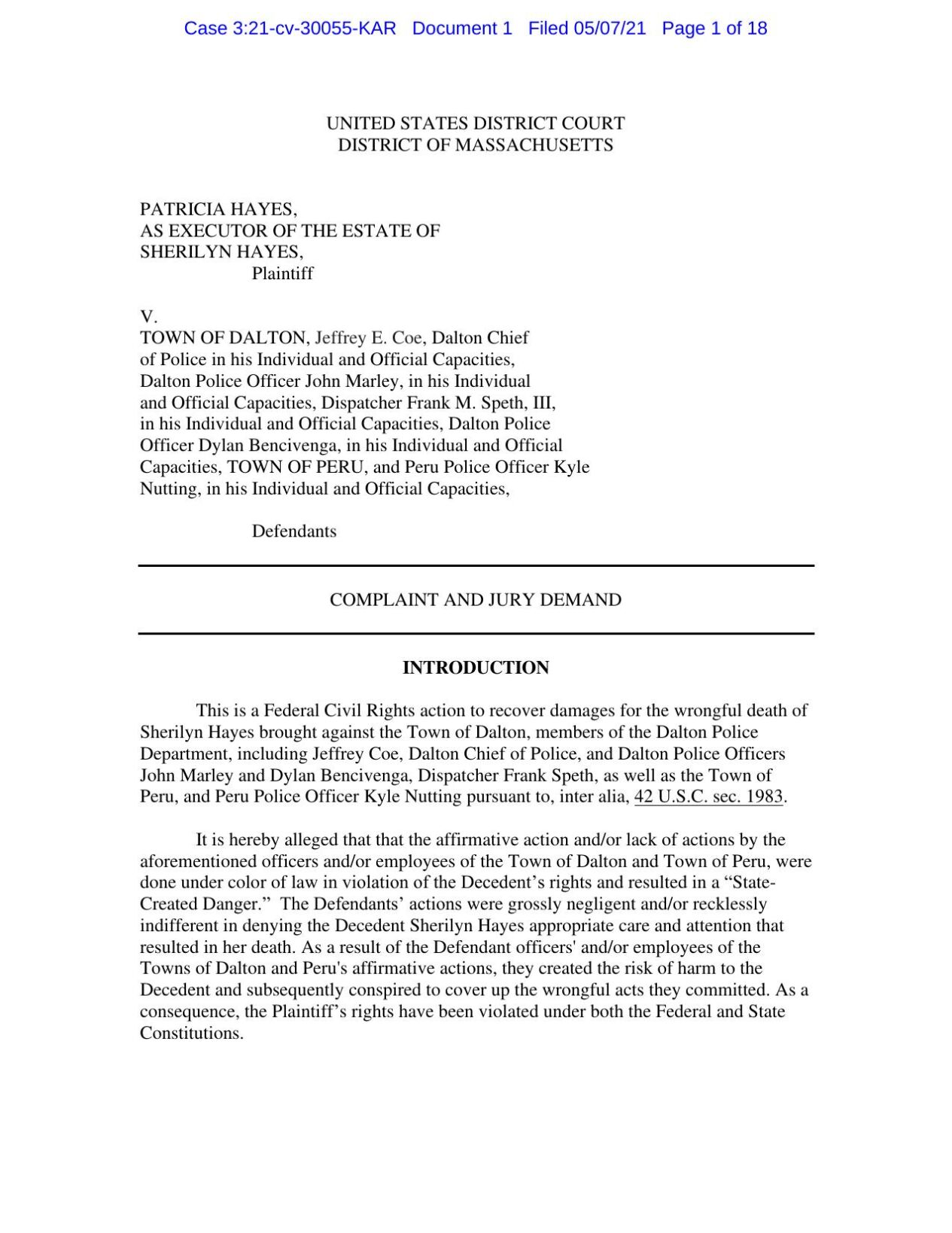 Little in the civil action will come as news to people who have followed the aftermath of the high-profile incident Nov. 23, 2019, which led within months to the dismissal of the senior officer involved, John M. Marley, and the departure of the police chief.

The lawsuit names the towns of Dalton and Peru, four people who worked at the time for the Dalton Police Department and one officer from Peru, Kyle Nutting. Nutting lived with Sherilyn Hayes and was identified in an emergency call that night as having been involved in an argument with Hayes.

The legal counsel for the town of Dalton did not respond to a request for comment. The court Tuesday approved the issuing of summonses to all the defendants.

The suit also names former Police Chief Jeffrey Coe, dispatcher Frank M. Speth III and officer Dylan Bencivenga. Coe left as chief in July, after the town raised questions about his job performance weeks after Hayes’ death. He reached an agreement to resign that paid him $141,339.

Marley was fired a year ago this week by the Select Board, after his conduct, and that of Coe, were probed by an investigator hired by the town.

As the town itself concluded, Marley exhibited conduct unbecoming an officer and was derelict in not responding right away when a dispatcher relayed the 911 caller’s word that Hayes was despondent and had threatened to harm herself.

Marley instructed Bencivenga, a junior officer in another cruiser, to stand by at the address, rather than respond fully to the call. Marley radioed Bencivenga at 6:21 p.m., saying, “Just stand by in the area there. I’m going to make a phone call and I’ll update you in a minute,” according to records of that conversation.

At the same time, the suit alleges that Marley was looking for excuses not to respond in phone conversations with Nutting, who was having dinner with the Peru Police chief at the time, and with the neighbor, Tyler Hamilton.

“Defendant Marley’s reckless indifference and failure to respond to the scene was a blatant violation of his own Department’s Rules as well as the training and education provided to police officers in Massachusetts regarding responses to domestic violence incidents,” the suit states.

In pursuing a civil rights claim, the suit argues that by seeking to protect Nutting from possible career consequences — as a police officer linked to a domestic incident — the defendants put Sherilyn Hayes at increased risk.

The officers involved, it claims, treated Hayes differently “due to the fact the alleged domestic assailant was a police officer ... refusing and/or failing to provide protection to Plaintiff in light of the known threat posed to her safety.”

The Hayes lawsuit appears to make full use of the documentary evidence compiled in the Coe and Marley employment cases, including transcripts of interviews, as well as the 911 calls from an anxious neighbor that started at 6:16 p.m.

Investigator Alfred Donovan, the consultant and former Tewksbury Police chief hired by Dalton, later would report: “I find it more likely than not that Officer Marley’s first priority was to advise Officer Bencivenga that a police officer was involved in the domestic dispute and that immediate response to a call for a well-being check on someone who threatened suicide was subordinated to this ‘professional courtesy.’ “

The suit also quotes from Betty E. Waxman, the independent arbitrator who ruled against Marley’s attempt to win back his job.

“[Marley’s] primary motivation was to protect Officer Nutting, not Ms. Hayes, even after Mr. Hamilton stated that he had already been to the Hayes residence and there was no response,” Waxman wrote in her decision last month. “[Marley] lost precious moments looking for a direct instruction to go to the Hayes residence and failing that, a way to rationalize not going.”

The suit seeks a jury trial, and a judgment that awards compensatory and punitive damages. Patricia Hayes is represented by attorney Timothy M. Burke, of Needham.

A former investigator for the Massachusetts State Police will lead a probe into how the Dalton Police Department handled a rape case that was dropped last month by prosecutors.

A U.S. District Court magistrate says the man that the late Sherilyn Hayes, of Dalton, lived with at the time of her death by suicide will remain a defendant in a civil lawsuit. The case is likely to come to trial in mid-2023.