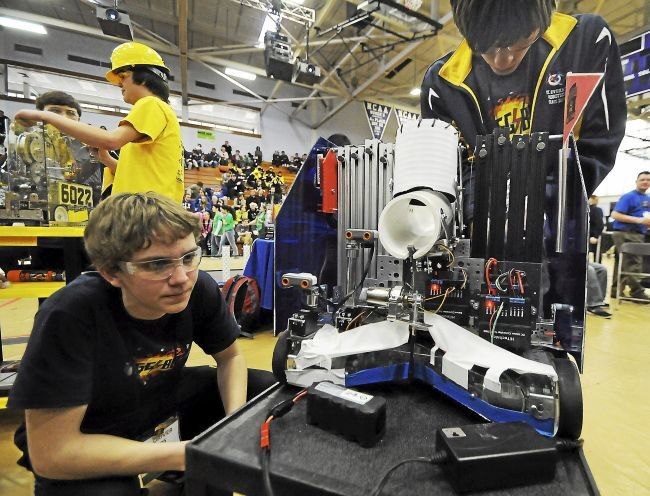 Mount Everett Regional High School junior Jake Christinat, left, and senior Kosta Casivant, with their robot on Saturday during the First Tech Challenge Super Regional Championship at the University of Scranton in Pennsylvania. 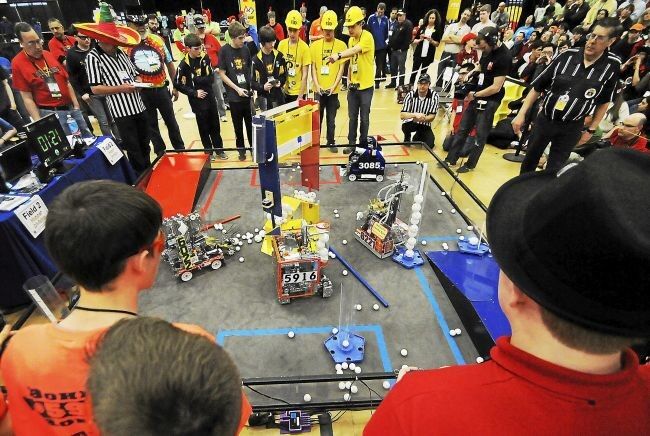 The Higgs Bots team, pictured in background from left, compete with their robot during the final round of Saturday's regional championship.

Mount Everett Regional High School junior Jake Christinat, left, and senior Kosta Casivant, with their robot on Saturday during the First Tech Challenge Super Regional Championship at the University of Scranton in Pennsylvania.

The Higgs Bots team, pictured in background from left, compete with their robot during the final round of Saturday's regional championship.

SCRANTON, PA — The Mount Everett Higgs Bots survived some technical difficulties this weekend on the way to their first-ever berth in the First Tech Challenge World Championships in St. Louis.

The high school robotics team from Sheffield finished sixth overall of the top 25 teams in the FTC East Super Regionals who advanced on Saturday to the global competition April 22-25. Last year, the Higgs Bots just missed qualifying for the Midwest event, finishing 27th in the regionals.

The Mount Everett Regional School squad and Team Enginuity from Lenox Memorial Middle and High School were among the 72 high school robotics competitors from Maine to Virginia who gathered on the University of Scranton campus for the three-day event that began Thursday.

Mount Everett, Lenox and Lincoln High School had qualified for the East Super Regionals by jointly winning the FTC Massachusetts crown in Natick on Feb. 28.

The Higgs Bots initially performed well in Scranton, winning seven of eight qualification matches to finish third in one of the two 36-team divisions; Lenox ended up 23rd in the same bracket as Mount Everett. The top four teams within each division then squared off in semifinal and finals competition; the two divisional winners meeting for the regional championship. All matches are a best two out of three.

The Higgs Bots' troubles began during the playoffs, according to Chris Thompson. The adult mentor for the three-time defending FTC state champion said a cable came off and was ultimately repaired, the two drive wheels weren't in sync and their was a problem with the robot's autonomous program.

"It was almost a Jekyll and Hyde thing," he said. "Friday was a good day but we didn't do well Saturday and kind of backed into the championship final."

The trio won their divisional crown, but fell 2-1 in the title match to three teams from Maryland.

"The kids had mixed emotions; extremely excited about qualifying for St. Louis, but kind of hanging their heads because their robot didn't do well for the alliance," Thompson said.

With a month to prepare for the world championships, Thompson expects his 12-member team will overhaul the robot — possibly changing its design — in order to be competitive on the world stage.

Team Enginuity also had its share of robot malfunctions early on, but the Lenox team fell victim to a situation out of their control. The other Berkshire County competitor was in 13th place with two matches left in the qualification round, yet confident of moving up into the top 10 within the division and in contention to being chosen as an alliance team for the playoffs

However, Lenox mentor Matt Cote said problems with the field control system, which the robots rely on to perform, contributed to Team Enginuity losing the last pair of matches.

"We were frustrated, especially when officials wouldn't grant us a do-over," Cote said. "The kids handled the situation well, extremely mature about what happened."

FTC events involve sophisticated robots performing singular tasks, this year it is putting Wiffle balls and plastic golf balls into four tubes of various heights on a 12-foot by 12-foot playing surface. The robot initially must be able to fit into a 18-inch cubed box, before teams can alter them to the design they want.

Unlike the playoffs, randomly selected two-team alliances are formed for the preliminary round. For both the championships and opening matches, the alliances work together to score points within a two-minute, 30-second time frame. Each robot has two student operators: one drives the machine, the other controls the attachment performing the task.

A third student acts as a coach, making the robot operators aware of what the other three teams are doing as you have two sets of alliances on the same playing surface at one time.