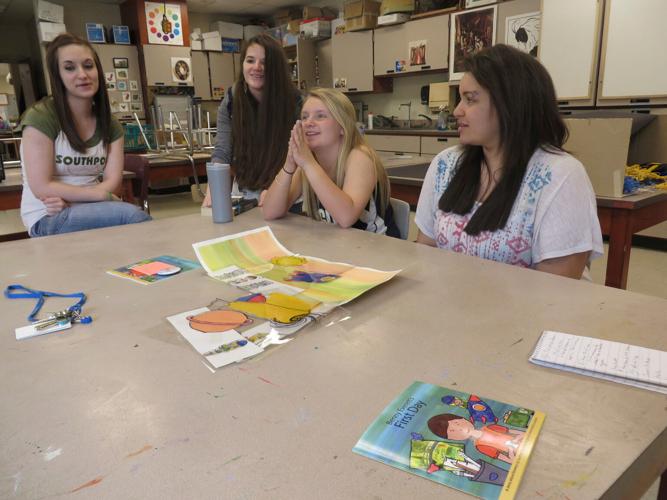 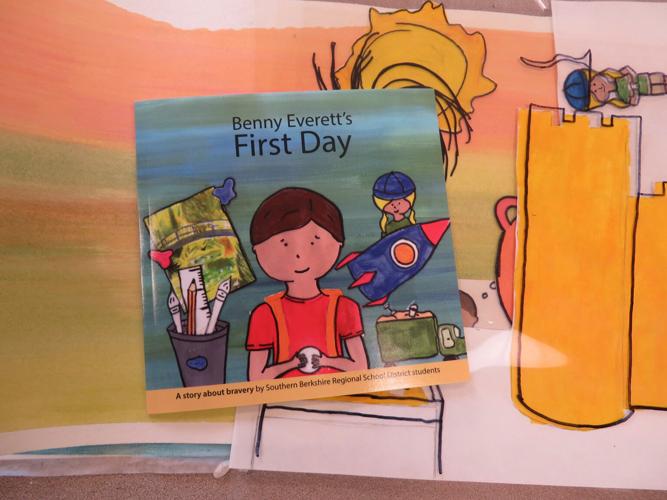 SHEFFIELD -- Writing a book for youngsters is anything but child's play. Just ask the students of Kari Giordano's Spring 2014 Foundations of Design class at Mount Everett Regional School.

The six sophomores researched, designed and made 10 revisions to publish a children's book, "Benny Everett's First Day." The book was created to help alleviate preschoolers' apprehensions about going to kindergarten and promote school culture.

"We each had different ideas for starting the story," said class member Elyssa Johnson.

"Which was the tough part about it. Even though we're a small class, you still have six kids with differing opinions," said sophomore Morgan DeGrenier.

In addition to DeGrenier and Johnson, Isaiah Farnum, Sage Hervieux, Alliyah Mead and Caliann Wood also worked on the book.

"It took a lot of time," Giordano said. "It's difficult to write a book as a group. But for that reason alone -- to see how the students were able to solve a problem -- I would do [this project] again in a heartbeat."

The students visited Kimberly "Miss Kim" Bleau's early kindergarten class to interview children about their first day of school, "and we tried to remember ours and what it was like," Johnson said.

The high schoolers then held a design charrette, a formal design process which involved artistic planning, and meeting with and soliciting feedback from school faculty and administrators on the 22-page project, which was supported by the Eagle Fund. Published through Blurb.com, the back of the book also contains information on the district's early childhood education and care programs.

"It's a design class, so they had to learn to be OK with revisions because that's what designers do," Giordano said.

As the main story writer, Johnson said she learned some hard lessons. "I know [the story's] not mine; it's for someone else. But it wasn't fun to have to swallow my pride and re-write things," she said.

The story's lead character is a boy named Benny Everett -- a combination of Benny being "an easy name for kids to pronounce," Mead said, and "Everett" being an ode to the name of the high school.

Benny tells his mother he doesn't think he's brave enough to go to school, so his mother hands him a small pin with a picture of an eagle on it (the high school's mascot), as a symbol of bravery and a token of courage.

When he gets to school, Benny realizes his pin has gone missing. But while he looks for it, he finds himself enjoying the various aspects of the school day, from the "sweet voice" of his teacher, "Miss Kim," to his lessons in reading and art. A girl in his class, Abby, finds the pin. But when she goes to give it back, Benny, who realizes he was braver than he thought, tells Abby to keep it as a gift.

Beyond the story line, each student had a role in hand-drawing the book, from the watercolor washes that became the walls of the classrooms to the outlines of the characters to the details of the pin and the tiny paintings that appear on the wall of the art room in the book.

DeGrenier said she was "a little nervous" about the collaboration process, but was impressed with the finished product. "I think it really worked out well," she said.

Bleau's early kindergartners also approved. "Some of them were really surprised that we did all of the illustrations," DeGrenier said.

Superintendent David Hastings, who has a 1-year-old granddaughter, said he's "so excited" for the book to be shared through the district's expanded early childhood program.

Said DeGrenier, "I hope this teaches kids that school's meant to be something fun, not something to be scared of."