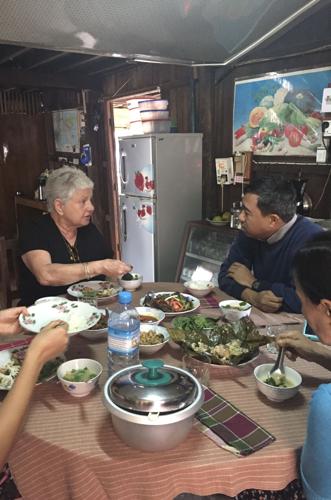 Abby Pratt, left, in Myanmar with Bo Bo Nge, right, in December 2017. Pratt said a recent photo of Nge confirmed that he still is alive, after a Facebook post this month said he had died while jailed by the military regime. 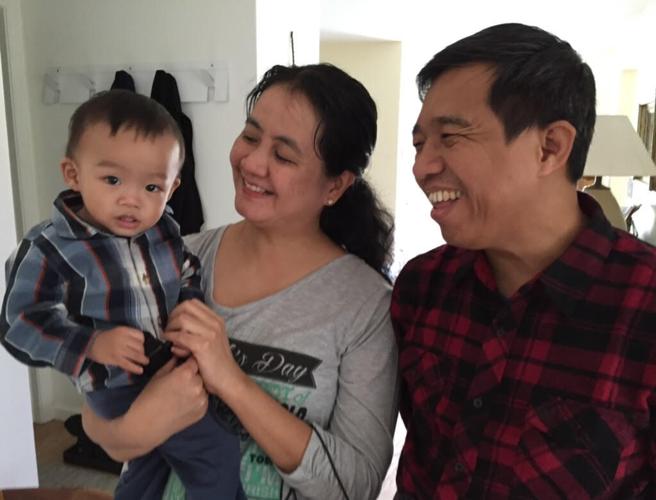 Bo Bo Nge with his wife, Me Kyi, and son. Nge, the deputy governor of the Central Bank of Myanmar, has strong ties in Great Barrington. A photo has confirmed that he still is alive, after a Facebook post this month said he had died while jailed by the military regime.

GREAT BARRINGTON — Bo Bo Nge, a Myanmar official with strong ties to the Berkshires, appears to be alive in an army interrogation center in that country, a close friend said Tuesday.

Nge, deputy governor of the Central Bank of Myanmar, was jailed in February, amid a military coup in that Southeast Asia country, and had been feared dead in recent days. But, a photo of Nge that surfaced has confirmed that he remains alive.

“He looked pale and his hair was long,” said Abby Pratt, of Great Barrington, noting that whomever took and released the photo through secret channels took a great risk.

But, she said, she still worries about Nge, who has a heart condition. The Tatmadaw, the military regime, is notoriously brutal, fanning out across the country and using “severe torture” to extract confessions and information — and stoke fear, she added.

“Imagine the worst, and that’s what happens there,” Pratt said. “It is so evil.”

Nge was taken from his home Feb. 1 by members of the military after they overthrew the democratically elected leadership.

Rumors of Nge’s death while in the custody of the military regime swept across social media this month, and with it despair that a man beloved for his brilliance and kindness had been lost.

But, the recent photo was confirmed to be authentic, and friends and family received “definite confirmation” of Nge’s location at the interrogation center, contradicting earlier reports that he was held at Insein Prison in Yangon, Pratt said.

This prompted a member of the junta, on April 10, to say on a website that Nge is alive and that the rumor was spread to stir more demonstrations. The website also said that Nge was being held in a “Yeiktha,” which translates into “guest house,” according to Ba Win, a friend and former dean of students and provost at Bard College at Simon’s Rock.

“God spare me their guest houses,” he said, noting that it might be better than a jail cell, which in Myanmar is “a very grim place.”

It also stirred grief. Friends abroad couldn’t be sure after losing contact with Nge’s wife — she fled to a village with the couple’s young son after Nge was abducted. His wife has been silent, out of concern by her family that she or the child would be abducted, Pratt added. Also, the regime has cut the country’s internet.

Friends of the couple hope that continued news coverage of his plight will help apply pressure for the release of Nge and other detainees. Win said the “strong voices of U.S. officials are noted.”

The crisis began after the landslide election of Aung San Suu Kyi, and her party, the National League for Democracy, sparked a military coup as the regime declared the election results fraudulent.

Bloodshed ensued, and included the killing of children and use of torture. More than 700 people have died and several thousand are detained as protests against the military regime continue across the country. Others have disappeared.

While President Joe Biden in February asked for the release of detainees and ordered sanctions that would lock $1 billion of the country’s U.S. assets, people feel that the world isn’t helping them enough.

Nge was jailed for 4½ years for leading student protests in the 1988 uprising.

After fleeing to Great Barrington in 2000, with assistance from Win and Pratt, a former Eagle reporter and editor, Nge went to Berkshire Community College. He was a dishwasher at various restaurants and worked with Pratt’s late husband, the economist Lawrence Pratt, at American Investment Services in Great Barrington, and at the American Institute for Economic Research.

Laurence Harris, a friend and professor of economics who was Nge’s Ph.D. adviser at the University of London, said he worries for his health, and is pained thinking of Nge’s separation from his young son. He and others had sent pleas for help to members of parliament.

“It was very brave work that he was doing and technically very sound,” Harris said. “He was in charge of the reform of the banking sector. That’s a very difficult job to do in any country.”

Donald Lathrop, a professor of Nge’s at Berkshire Community College who previously saw him in December, on a Christmas Zoom call with the family, said he hadn’t heard the rumor of his death. He said he recently was cleaning pine needles off his roof when he grew emotional because Nge had helped him shingle it.

First he was detained. Now the regime has cooked up corruption charges against Bo Bo Nge, says a close friend in Berkshire County.