Nearly a year ago, hundreds of Democrats lodged complaints against state party leaders for their involvement in the 2020 Democratic primary between U.S. Rep. Richard Neal and then-Holyoke Mayor Alex Morse.

After the party’s rules committee dismissed those complaints, several Berkshire County Democrats have continued to call for Massachusetts Democratic Party leaders to apologize for actions that a party-ordered investigation found violated one of its bylaws.

The steering committee of the Berkshire Democratic Brigades, the county’s official branch of the state party, sent a letter to Massachusetts Democratic Party Chairman Gus Bickford in May requesting that party leaders send Morse, who lost the primary by a 59-41 percent margin, “a formal, written apology.” And members of the People for Democratic Party Reform coalition plan to demonstrate during the party’s Sept. 25 platform convention and call for Bickford’s removal.

NORTH ADAMS — Although a group that accused Holyoke Mayor Alex Morse of inappropriate behavior with college students later apologized for their role in aiding "homophobic attacks," for some …

Shortly before the Sept. 1 primary, a group of students with the University of Massachusetts Amherst College Democrats circulated a letter raising concerns about Morse, who previously served as an adjunct instructor at the university. Subsequent reports from The Intercept suggested that political motivations played a role for some students involved and showed that state party members provided advice to the students.

Attorney and former state Sen. Cheryl Jacques concluded in an independent investigation, sent to party members on Nov. 5, that Bickford violated a party bylaw when he provided advice to students on their communications with a political reporter. Party bylaws say that staff members cannot “endorse or participate in any contested Democratic Primary campaign.”

Jacques found that while the party “did not initiate or plant” the idea for the college Democrats to send a letter, Bickford admitted that he told students that Politico reporter Alex Thompson was “a trusted source” and that “if you don’t go on the record with him, he won’t write the story.” Those statements, Jacques concludes, show that Bickford “was encouraging the students to talk to the reporter on the record and to do so prior to the election.”

The college Democrats apologized to then-candidate Alex Morse, writing that raising anonymous claims of sexually inappropriate behavior “played into homophobic stereotypes that have been used to oppress gay men in politics.” Morse replied that he regrets “having made anyone feel uncomfortable” and would “become more aware of power dynamics,” although he has said elsewhere that he “will not apologize for being a young person, for being gay and for being single and having consensual relationships with other adults.”

An investigation by the university found that Morse did not violate its policies on sexual harassment or consensual relations.

Bickford previously had discouraged Morse from running in an early 2019 meeting and “may very well have violated the spirit” of a bylaw at that time, Jacques said, but did not violate the bylaw itself because Morse had not yet declared his candidacy.

“Regardless of their motives, Democratic Party officials should have pulled back as soon as it became clear that the students were seeking advice about their relationship with a primary candidate in the upcoming election,” the Berkshire Democratic Brigades said in the letter sent to party leaders on May 12.

“Whether or not they suggested the eventual leak, by continuing these conversations the officials broke an important MDP bylaw that proscribes their interference in a contested primary.”

Without a written apology to Morse and a reply to party members who lodged complaints, the letter says, the committee “would support the official censure” of Bickford, Executive Director Veronica Martinez and Jim Roosevelt, a longtime party member who also serves as its volunteer attorney.

Around 20 of the roughly 40 members of the steering committee were present at a virtual meeting where a majority voted to send the letter, committee members said.

Bickford, who was reelected in November by 63 percent of state party members who voted, has apologized for “the pain caused to many members of the LGBTQI+ community” but has disputed Jacques’ finding that his advice violated the bylaw. 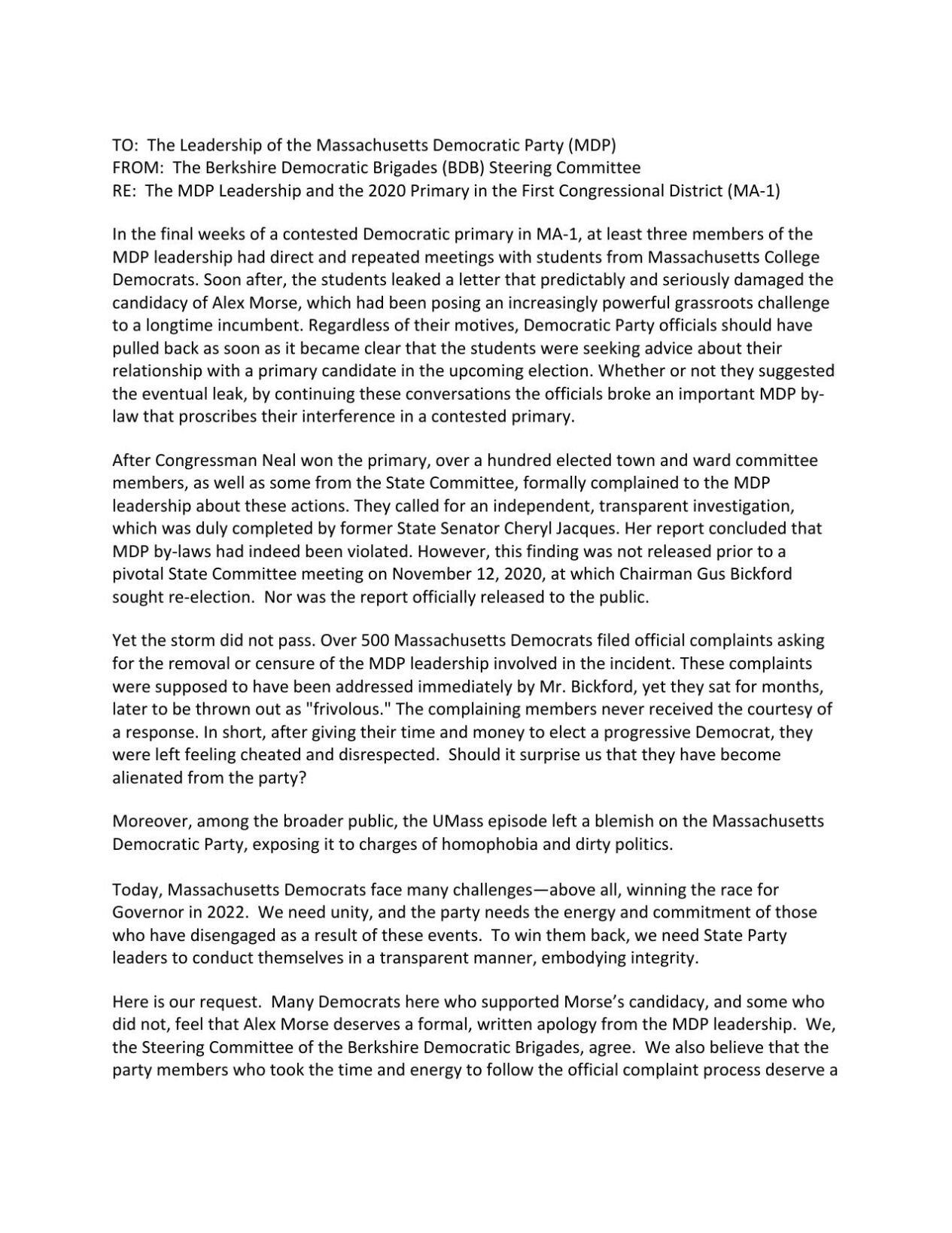 “I was just stating something that I have been taught and learned from 30 years of being in politics,” Bickford wrote to Berkshire Democratic Brigades steering committee members in a May 3 response to the Brigades’ draft letter. He reiterated that his intention was to “provide assistance” to the students as best he could.

“Attorney Jacques felt as though my answer inserted myself into the primary race by taking sides, however, I know I was not trying to do that and the Rules Committee agreed with me,” Bickford wrote.

“In consultation with the deputy legal counsel, the Rules Committee found that the complaints did not have merit, or were ‘frivolous’ as defined in the process outlined in the Charter,” Mitchell said in an email. “ ‘Frivolous’ in no way reflects the sentiment in which the complaints were handled.”

Sonya Bykofsky, who last September sent the party complaints signed by more than 500 members, said she did not receive a response regarding the outcome of the complaints. Bykofsky, who recently became state director of People for Democratic Party Reform, said the planned demonstration during the September party convention is “an action in need of taking at this point because everything we’ve attempted to this point has been ignored.”

“It is completely appropriate to ask why a person in a leadership position violated our own bylaws,” said Bykofsky, who also chairs the Lenox town Democratic committee and sits on the steering committee of the Berkshire Democratic Brigades. “Ignoring your own party’s corruption is condoning it, and many of us are not OK with that.”

In the aftermath of the Massachusetts state Democratic Committee’s election for its leader, a breakdown of how members voted suggests that ass…

Bickford, in his reply to the Brigades, said he has conducted listening sessions and has worked with the party’s LGBTQ+ and Affirmative Action Outreach committees, in addition to “launching a vigorous Diversity, Equity and Inclusion training series.” During Bickford’s 2020 reelection campaign, two challengers had said they would do more than Bickford has done to diversify the party.

But, Cheryl Rose of Dalton, another steering committee member, said the issue the Brigades raised was a matter of party rules rather than of prejudice. And the party has not acknowledged that its actions, she said, “clearly helped Neal.”

Addressing the fallout from the primary, the letter from the Brigades says, is a necessary step for the party to rebuild trust as it pursues its goals, such as unseating Republican Gov. Charlie Baker in 2022.

“We need unity, and the party needs the energy and commitment of those who have disengaged as a result of these events,” the letter states. “To win them back, we need State Party leaders to conduct themselves in a transparent manner, embodying integrity.”

Morse said Friday that he has not received an apology from Bickford.