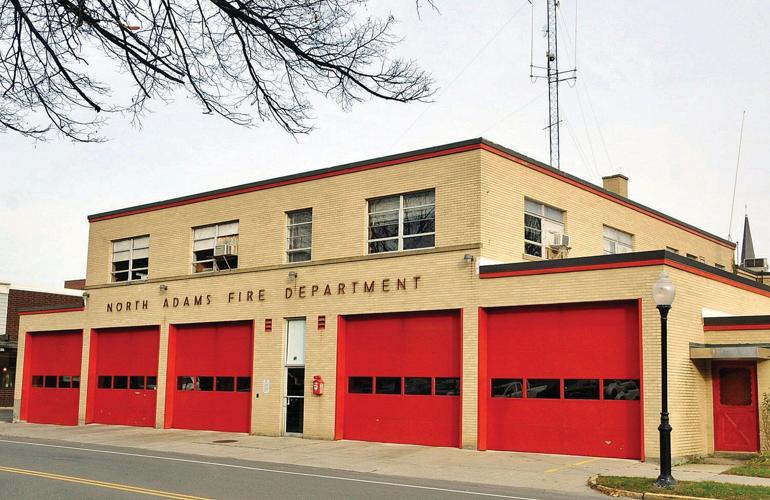 The heat has been out since mid-December in parts of the North Adams public safety building, according to the police union. 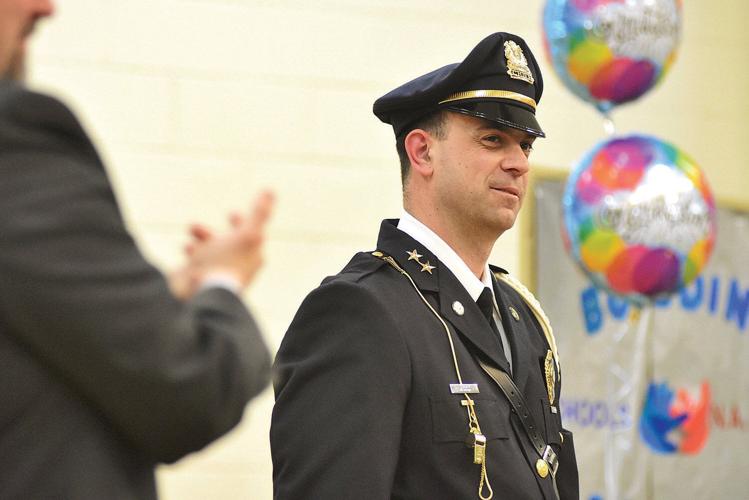 North Adams Mayor Tom Bernard applauds in May 2019 as new Police Chief Jason R. Wood looks out at the audience after being sworn in at Brayton Elementary School. Wood runs a department long beset by physical plant issues.

NORTH ADAMS — For weeks now, police have used space heaters to keep the basement of the city’s public safety building warm, as a broken heating system becomes the latest issue to plague the aging structure.

The North Adams Public Safety Committee took up concerns about city infrastructure at a meeting Monday night, including fire hydrants in disrepair and acute problems in the building that houses the city’s fire and police departments.

Councilors and police officers said the building’s basement has been without heat since mid-December and that indoor temperatures have dipped into the 30s during recent cold snaps.

“We put a thermometer down there; it’s currently 45 degrees downstairs,” said Detective David Sherman, who spoke on behalf of the local police union. “We’ve been working around these issues for years. It’s just to the point where, I don’t know how many issues you can work around after a while.”

Officers reported that heat has not returned to the basement. Councilors Jason LaForest and Pete Oleskiewicz also said they recorded temperatures in the 40s on separate visits to the building Monday.

On Tuesday, Mayor Tom Bernard told The Eagle that the city had ordered equipment to do the repairs but that the necessary supplies were back-ordered.

“We want to move as fast as we can, because this is an untenable situation,” he said.

Sherman said the heating problem in the building began after the building’s radiant heating tubes “rotted out.”

The heating loss affects the building’s COVID-19 screening area, the downstairs bathroom, the locker rooms and the interview room, according to descriptions from officers and councilors. Sherman said officers have stopped using the interview room and brought in their own space heaters to keep some parts of the building warm, including the locker rooms.

NORTH ADAMS — Don't remove that tarp just yet.Plans to repair the North Adams public safety building's porous roof have been put on hold over the building's lack of handicapped …

The recent heating concerns come on the heels of years of issues with the building. At Monday’s meeting, officers and councilors described a panoply of long-standing problems, including jail cells without clean water, mold from previous leaks and accessibility violations.

”Our biggest concern is, obviously, the handicap access,” Sherman said. “It’s a hardship here, in terms of anyone who comes into the building.”

In a settlement with the U.S. Department of Justice nearly a decade ago, the city agreed to make the facility accessible under the Americans with Disabilities Act. The city since has made substantial improvements to the roof, effectively stopping the structure’s extensive leaks, but it has not undertaken the accessibility modifications.

The structure was built in the 1950s, decades before the ADA passed, and has no wheelchair ramp. Officers have to lead suspected perpetrators up three flights of stairs, and the building’s glass front door has been shattered multiple times while police brought in prisoners, seriously injuring at least one officer, according to retired Police Sgt. James Burdick.

At Monday’s meeting, Burdick also said the city has been sued over the condition of the building and has paid “numerous medical bills to civilians” injured on its uneven stairs, which he said are not up to code.

”If you had a state inspector come in and look at the wiring in that building, the plumbing, they’d condemn the building and close us down,” Burdick said.

Councilors and officers expressed concerns about the effect that the building’s conditions might have on prisoners. According to Sherman, officers have been providing individual water bottles to inmates — the “only actual clean water” available on the premises.

“The cell block area is a big concern of mine,” Sgt. Preston Kelly said at the meeting. “The safety is a concern. And the potential liability of housing people who don’t necessarily want to be in custody … and something goes wrong.”

Bernard said that the city is looking for money to study whether the existing site could be renovated and continue to house one or both of the departments — and to examine potential new locations for the building.

“We’ve talked at 10,000-foot level about possible sites,” he said. “But, what we need is a real focused analysis of those issues.”

The city is considering applying to the state’s District Local Technical Assistance Program for assistance surveying options, according to Bernard.

Fire hydrantsAt the meeting, the committee also took up concerns around fire hydrants, after the recent fire at Greylock Valley Apartments.

According to LaForest, about 100 hydrants across North Adams are not operational — up to one-fourth of the city’s hydrants.

In a letter to city councilors, the Association of Firefighters Local 1781 detailed how an out-of-service hydrant near the building forced firefighters to stretch several hundred feet of supply line to the next available hydrant.

”This resulted in invaluable manpower and time being taken away from the first arriving crew of five firefighters,” wrote Matthew Labonte, the local union president. “The hydrant system has not improved as promised over the last few years. It has continued to decay and puts the lives of our community members at great risk.”

Councilors agreed that the repairs needed to be undertaken but pointed out the high expense associated with the task. According to LaForest, each hydrant costs several thousand dollars to replace, especially when the valves connected to the hydrant no longer are being manufactured. The complications could mean a total cost of $250,000 to replace the 100 hydrants estimated to be out of order.