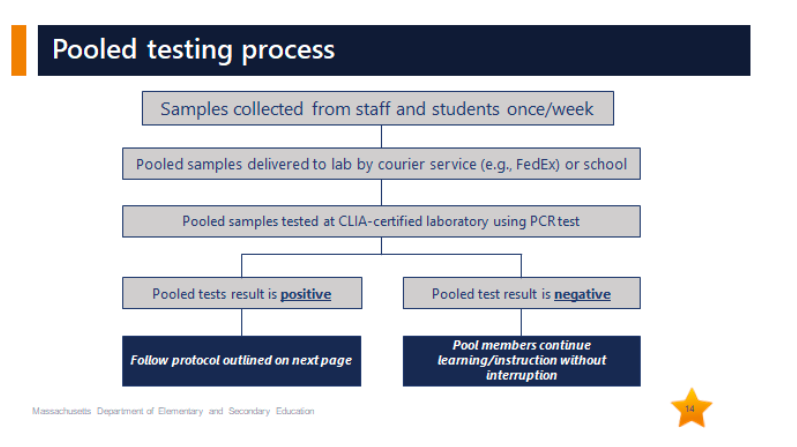 North Adams Public Schools will launch a pooled testing effort as part of a statewide initiative to keep students in person as much as possible. 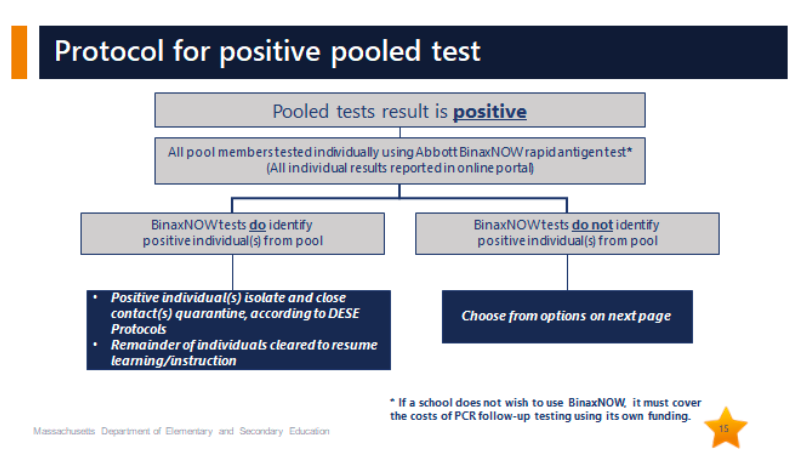 Pooled testing conserves money by testing batches of five to 10 students and following up with rapid tests only for pools that test positive.

North Adams Public Schools will launch a pooled testing effort as part of a statewide initiative to keep students in person as much as possible.

Pooled testing conserves money by testing batches of five to 10 students and following up with rapid tests only for pools that test positive.

The district announced the program to parents and students in a letter Thursday.

The program involves testing self-administered swabs in batches of five to 10 people at a time. If a “pool” returns positive, the district then will test each member of the group with an Abbott BinaxNOW rapid test, which returns results in 15 minutes.

The process conserves tests by pooling specimens and only following up with positive groups.

“By using the pooled testing methodology for infectious diseases, the cost of implementing a school-wide testing program is reduced,” Superintendent Barbara Malkas said in the letter. The program “provides the administration with real time data and the ability for immediate response. This will limit the number of students and staff members who will need to be out of school in remote learning and the need for a whole school or the district to close.”

The Department of Elementary and Secondary Education announced in January that it would expand the program statewide, opening it up beyond a limited set of pilot districts in Eastern Massachusetts. North Adams Public Schools applied for and received notice of acceptance Monday. CIC Health in Cambridge, a partner institution with the Broad Institute, already has started to train NAPS administrators and staff, according to Malkas.

In the case of a positive pool, students and staff will be tested at school and can return to class after a negative result. The Massachusetts Department of Public Health does not recommend isolating students in a positive pool until after the rapid-test results come back.

Individuals who test positive after the rapid tests will isolate, and the district will follow its usual contact tracing protocol.

In a presentation to the school committee Tuesday, Malkas said the program’s goals include bulking up existing mitigation strategies and keeping students in person as much as possible.

All students in second grade and above will administer their own nasal swabs, while those in kindergarten and first grade will have the test done for them. Families must opt in to the program, and Malkas has urged them to do so.

“It is my sincerest hope that you will see the value in having your child participate in the program as another active step in keeping our students and the adults who work with them safe from COVID-19,” she wrote in the letter to families.

The program will run from Feb. 23 until March 28 for students, at no cost to the district. Staff will start as soon as Monday. The school district can choose to continue the testing after the free test period ends at “low cost state contract pricing,” using coronavirus relief money, according to the district.