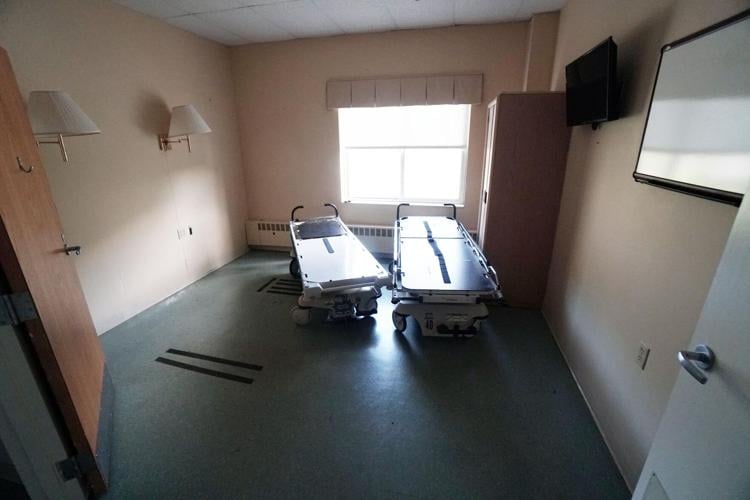 A resident's room at the former Sweet Brook of Williamstown Nursing and Rehabilitation Center after it closed. State Sen. Patricia Jehlen, a Somerville Democrat who chairs a key committee, sees this moment as an opportunity for nursing home reform. But, she said it will require a range of solutions, including some that support alternatives to nursing homes, such as home health care and assisted living facilities.

Christopher Potash and his friend, Noah McDonald, talk with Potash's mother Gertrude, 84, during a 20-minute visit in July 2020 at Greylock Extended Care Facility in Pittsfield.

Massachusetts needed nursing home reform even before the pandemic, people say. Now, the stakes are higher.

Even so, addressing long-term care problems in Berkshire County — and across the state — demands different solutions.

Better wages for workers, improved reimbursements for facilities and increased support for nursing home alternatives are all on the table, Jehlen said.

EAGLE INVESTIGATIONS: Poor staffing ratios have festered for more than a decade in the majority of Berkshire County nursing facilities, and continue today. Our investigation puts faces to those numbers.

“I certainly want to do something, and I think everything is connected,” Jehlen said. “This is the time that we have a chance because of what happened at the beginning of the pandemic.”

Jehlen and state Rep. Ruth Balser, D-Newton, worked with SEIU Local 1199 and the Massachusetts chapter of the AARP to file a bill that tackles nursing homes’ low staffing levels, which predate the pandemic, head-on.

And it would start a “career ladder” program to improve worker retention and care quality.

In 2019, a wave of nursing home closures led the Massachusetts Legislature to establish a 15-member task force to investigate the industry’s financial stability.

The task force recommended that the state seek to close low-quality and low-occupancy nursing facilities, implement a revised reimbursement rate structure, incentivize high-quality care and ensure adequate pay for workers across the continuum.

Gov. Charlie Baker’s administration acted upon some of those recommendations. In 2020, the Baker administration restructured reimbursement rates. To receive the increased rates, facilities had to meet a minimum of 3.58 hours of care per resident per day, which still falls below the CMS recommendation of 4.1 hours, and had to spend at least 75 percent of revenue on their care workforce.

More recently, an August law established a special commission to study the state Department of Health’s nursing home licensing process. The commission is required to submit a report and recommendations by October 2023.

Yet, both Jehlen and Balser say their proposal should accompany additional legislation that addresses wages, reimbursement rates and other issues.

“It’s not only requiring a higher number of hours, which is a necessary but not sufficient reform,” Balser said. “There’s a big issue with salaries for those folks who work in nursing homes, and there’s also working conditions. There’s a lot of issues.”

Jehlen said she hopes two categories of legislation can pass this session. One would expand Massachusetts residents’ access to nursing home alternatives on the long-term care “continuum,” which includes assisted living facilities, home health care and other options that offer greater independence. The other would address nursing homes themselves.

Dignity Alliance Massachusetts, a coalition of disability and senior advocacy groups, has endorsed 67 bills in the Legislature this session, including Jehlen and Balser’s proposal to increase staffing levels, it says on its website.

The group representing the state’s nursing homes, however, has expressed its reservations.

Massachusetts Senior Care Association President Tara Gregorio warned at a June hearing that proposals before the elder affairs committee would create “unfunded mandates,” although she added that industry leaders “agree in concept” with the reforms.

Gregorio estimates that Jehlen and Balser’s proposal to increase staffing levels would cost $170 million per year, she said in an email to The Eagle.

“Nursing facilities simply cannot afford these increases under the state’s existing reimbursement formula,” Gregorio said, adding that costs for temporary nursing agency staff have grown. “We continue to believe that any staffing mandate must be accompanied with a statutory provision that requires recognition of the new costs by MassHealth.”

The elder affairs committee is weighing the association’s testimony along with the support that the Dignity Alliance and its member organizations have provided for the bill, said state Rep. Thomas Stanley, D-Waltham, who co-chairs the committee with Jehlen.

“That’s the job of the committee, and that’s what we’re doing right now,” Stanley said. “One side says one thing, another side says another. And it’s our job to dig into the arguments and find out what is accurate and what can be changed in order to make the system work better.”

The Massachusetts Senior Care Association’s top priority is “the establishment of a stable and skilled workforce,” Gregorio said, identifying two bills as “critically necessary.” Those proposals sit before the Joint Committee on Health Care Financing, which heard testimony on them in September.

While 70 percent of nursing home residents have their care paid by MassHealth, the state Medicaid program provides reimbursements that fall $30 short per day of covering the cost of care for each resident, Gregorio said.

Former state Sen. Richard Moore, who serves as Dignity Alliance’s legislative chair, said the coalition has reviewed those proposals and declined to support them due to the potential for “cost-shifting” that would increase profits for facility operators.

“If MassHealth picked up the cost, are the savings going to be passed on as a profit to the owners?” Moore asked. “We’ve been working with some folks from the SEIU that represent some of the workers in nursing homes, and I think they tend to have the interests of the workers in mind more than management does.”

Even before the pandemic, Massachusetts residents had been showing greater interest in alternatives to nursing homes.

More older adults are choosing to “age in community” or “age in place” rather than seek institutional care in nursing homes, the Executive Office of Health and Human Services reported in 2019. One in six nursing homes in the state, it found, had low occupancy, defined as filling below 80 percent of available beds.

Still, some regulations and restrictions prevent people who may not need nursing care from accessing more independent alternatives, Jehlen said.

“There are people in nursing homes who don’t need to be there if we strengthen the rest of the continuum,” she said. “In order to pay adequate rates for people who need that care, we need to strengthen the less expensive and less restrictive services.”

Stanley worked on a commission that made recommendations for establishing a statewide licensing process for home health care agencies. Licensing more home care providers can provide quality assurance to families, he said.

“I think it’s incredibly frustrating for consumers to find the right and appropriate care for their loved ones when the time comes."

“I think it’s incredibly frustrating for consumers to find the right and appropriate care for their loved ones when the time comes, and we want to ensure that home care agencies are licensed and trained properly and that consumers know what they’re getting,” Stanley said.

Another priority is to “right-size” the nursing home industry so that nursing homes can be financially sustainable and that sufficient funds can go toward supporting care workers and expanding community-based services, Stanley said.

Jehlen has filed a bill to improve reimbursements for home health services, but regulations can also pose a barrier.

Many people living with HIV or AIDS, for example, must enter nursing homes if they are not old enough to qualify for home care, Jehlen said. While most residents must be 60 or older to qualify for home care — people diagnosed with Alzheimer’s are eligible if they are younger than 60 — one Jehlen bill would make home care available to anyone diagnosed with HIV or AIDS regardless of age.

Another Jehlen bill would authorize staff in assisted living residences to provide “common sense health services,” such as administering injections and applying ointments or drops. Some families have had to travel to assisted living facilities to administer insulin injections themselves because staff were not allowed to do so, Jehlen said. Assisted living facilities have temporary authorization to provide those services, but the authorization is set to expire Feb. 1.

Jehlen said she expects the complexity of problems facing long-term care facilities will require continued focus from lawmakers beyond this session.

“It’s rare that we solve all problems at once,” she said.

Danny Jin, a Report for America corps member, is The Eagle’s Statehouse news reporter. He can be reached at djin@berkshireeagle.com,

Our Opinion: Facing down the Berkshire nursing home crisis

A bill that would authorize “common sense” services such as insulin injections in assisted living facilities would help to lessen the burden on the nursing home system, policymakers say.