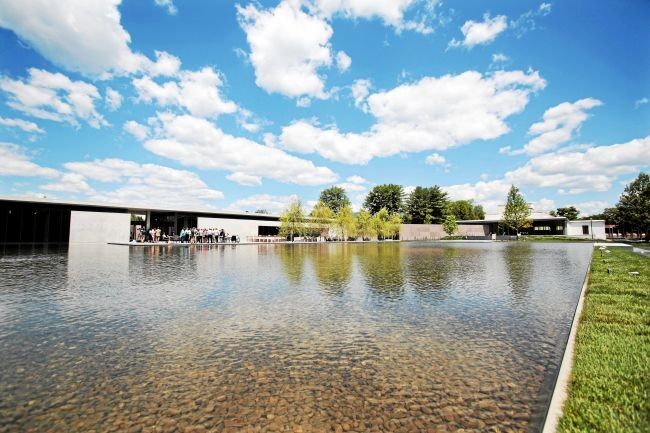 The 1-acre reflecting pool at The Clark Art Institute is the setting for the Williamstown Theatre Festival’s production of the musical “Row.” Concerns about crew safety in what has become a rainy season of outdoor productions led the festival to increase pay for workers and ensure that staff members have at least eight hours off between shifts. 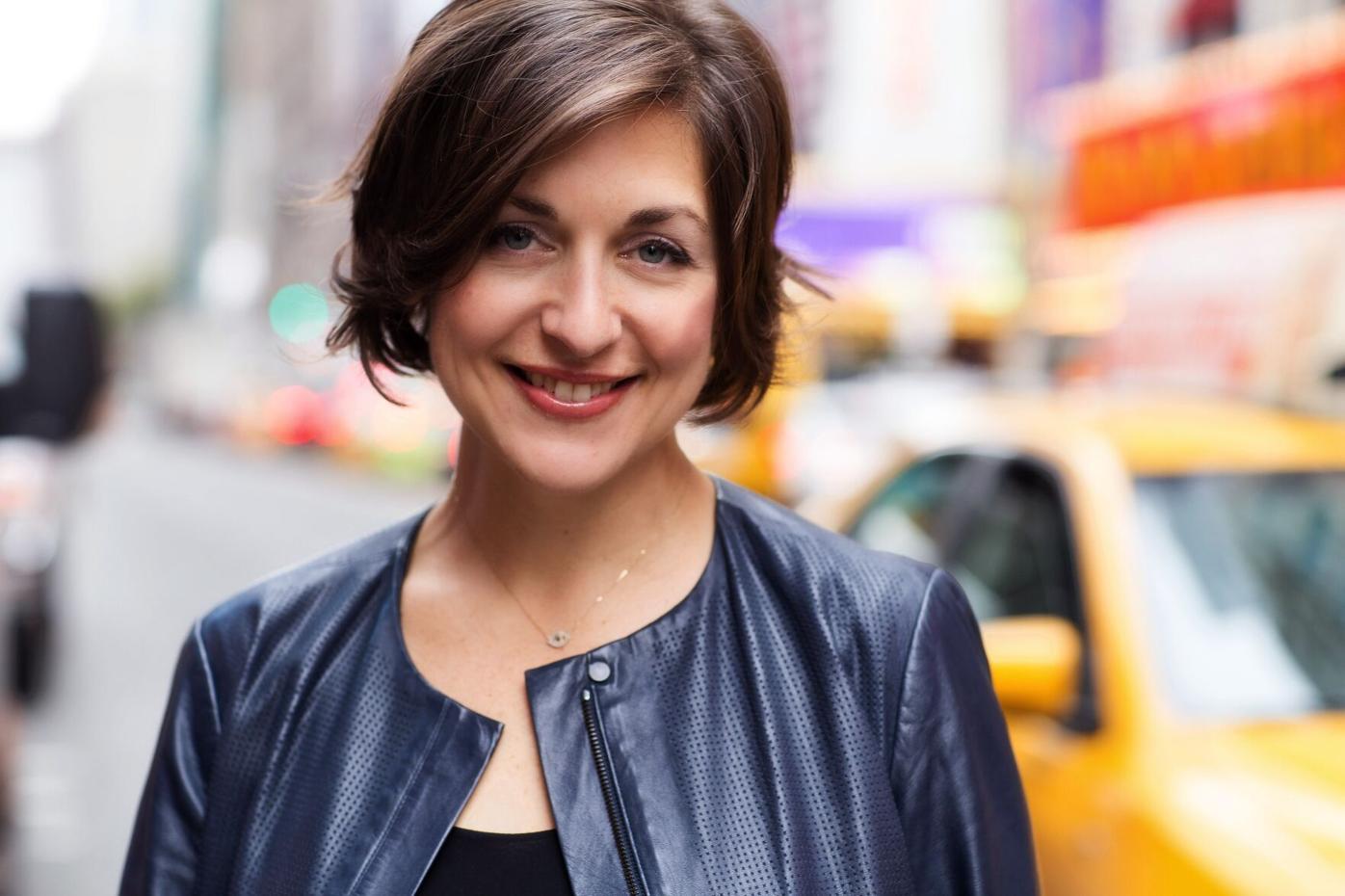 Artistic director Mandy Greenfield of the Williamstown Theatre Festival says the nonprofit has increased pay for crews after a dispute over compensation, hours and safety arose during a rehearsal for the musical "Row."

WILLIAMSTOWN — A dispute over crew safety and work conditions this past week, during outdoor rehearsals for a Williamstown Theatre Festival musical, led the nationally known nonprofit to revisit how it pays and schedules its staff.

Members of the audio crew for the musical “Row” walked out of a July 14 rehearsal, citing concerns about their safety because they were operating electrical equipment in a wet environment. The show is being performed outdoors at The Clark Art Institute in Williamstown.

“I think that the crew coming forward to make clear the circumstances … was both a courageous and smart move on their behalf."

In addition to the safety question, crew members involved took issue with what one termed the production’s “absurd” work schedule, and well as their hourly pay.

The festival’s leaders later met with crews and agreed to increase their pay and to adjust work schedules to allow them to have at least eight hours off in a row.

“We’re committed to the absolute best practices for our employees going forward,” Mandy Greenfield, the festival’s artistic director, said in an interview Tuesday. “We want to continue to put into place wages and practices that speak to those needs.”

“We have emerged together, a full team,” Greenfield said.

Though the dispute arose among a small number of crew members, the changes in pay are being rolled out to all employees. The festival declined to specify the amount of the raises.

“We do not disclose employment terms. We are proud to have adjusted compensation in order to keep everyone working on our season,” it said in a statement.

One person familiar with the week’s events said he believes the pay increase was $3 an hour, with the assurance that people would get at least eight hours off each night. The festival declined to confirm or deny that figure.

The walkout first was reported on the Instagram channel of Change Berkshire Culture, a group that, since February, has been parting the curtain on work life and conditions inside leading Berkshire County cultural institutions. The work stoppage also was reported Tuesday in the Los Angeles Times.

“Row,” by Daniel Goldstein, is the story of a quest to be the first woman to row alone across the Atlantic Ocean. The production takes place beside the Williamstown art museum’s massive reflecting pool and, weather permitting, will be staged through Aug. 15, according to the festival’s online calendar.

“The Clark’s reflecting pool becomes the stage for this uplifting world premiere musical that interrogates the resilience, fear, and ambition inside one individual,” the festival says of the show in its promotional material. “ ‘Row’ exposes you to the elements endured by an extraordinary woman undeterred by the odds.”

In the real world, an abnormally rainy summer added to the challenge of mounting an outdoor production. Rain had forced the festival to cancel four of the run’s first five performances, Greenfield said. Bad weather cost the festival to lose 60 percent of its outdoor technical rehearsal schedule.

“That critical period has been devastated by the weather,” she said.

An unfavorable forecast forced the theater to cancel a Tuesday night production of “ALIEN/NATION,” another show being staged outdoors.

On the day of the walkout, crews that had been earning about $15 an hour had set up and dismantled equipment at The Clark site several times, as forecasts changed. Each setup takes about two hours, according to a person familiar with the process.

“It’s a grueling process,” said one of the festival’s workers, who feared consequences for speaking publicly and agreed to be interviewed on the condition of not being named. After multiple false starts that day, with electrical equipment once again stowed, the order came to set up for a night rehearsal as the weather improved.

One crew member refused and left.

“That kind of triggered others to go,” the worker said. About six people walked out. “At that point, they were pushed to the brink. They were already struggling to find bodies needed to do this.”

A day after the walkout, an electrical inspection, by a company retained by the festival to do a daily check of code compliance, led to a delay in the next rehearsal at The Clark. “Our production management team has several strict, routine safety protocols in place to ensure the daily well-being of our employees,” Greenfield said in a follow-up email, in response to questions posed by The Eagle.

The crew’s odd hours stemmed, in part, from an agreement between the festival and the museum that work only would take place when Clark patrons were not present. Workdays started as early as 5 a.m., because of the need to prepare the set outside the museum’s open hours.

“People ended up with really bad night shifts,” the worker said. “Essentially, they’re at the beck and call of the employer. Some real off-stage drama.”

In addition, workers involved in the production say they did not have cover from intermittent rain showers.

“They didn’t plan for how it was going to get built,” the worker said. “They didn’t provide the infrastructure needed.”

A former festival employee, who also spoke on condition of anonymity and has been in touch with current staff, said the company did not do enough to research and prepare for the day-to-day difficulties of mounting shows outside. That led, he said, to safety risks and problems that could have been anticipated.

“Theatrical constructions aren’t designed to be waterproof,” he said.

By taking all of its shows outside, in a second pandemic summer, the festival didn’t have the shelter, and certainty, of existing buildings and safety protocols, the former employee said. “They missed that planning aspect,” he said of the festival’s leadership. “It’s not a wheel that’s being invented.”

Greenfield, the artistic director, said the theater did hire an outdoor production company to consult on how to mount an outdoor festival, but that involvement did not continue into the season.

Greenfield said she sympathized with crew members who faced hardships preparing for outdoor shows, including those who walked off the set last week.

“I think that the crew coming forward to make clear the circumstances … was both a courageous and smart move on their behalf,” she said. “We absolutely understand how miserable it is to work under these circumstances outdoors. We understood, heard and responded immediately. Their action is impactful. We embrace their voices and needs — and responded.”

“Everyone is back to work,” Greenfield said. “The adjustment spoke to the needs.”

Greenfield said the festival has absorbed lessons, as it works for the first time in its 67-year history to present its entire summer season outdoors. She said those lessons come clear “in hindsight.”

“We can’t replay the hand,” she said.

If the summer had not been so wet, crews and performers would not have faced the challenges seen this year, Greenfield said.

“We learned that those multiple tents [erected at The Clark] are not enough tents,” she said. “I would never knowingly plan to keep someone out in the rain. It is in some ways a perfect storm of conditions that, at some level, were within our control, and other conditions that were way out of our control.”

She added: “There has never been a point where we crossed the line into unsafe knowingly.”