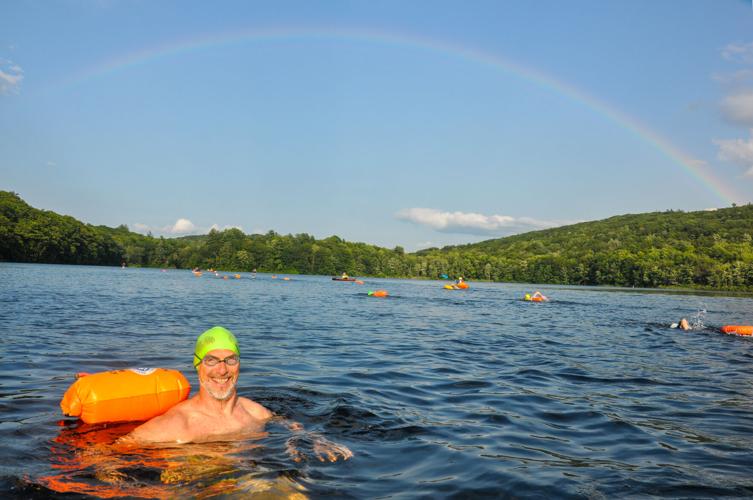 Framed by a rainbow, Bill Meier, of Great Barrington, leads a group of open swimmers in Goose Pond in Lee last summer. “We’re really advocating for swimming in the open water because, look what we’ve got here,” he said. 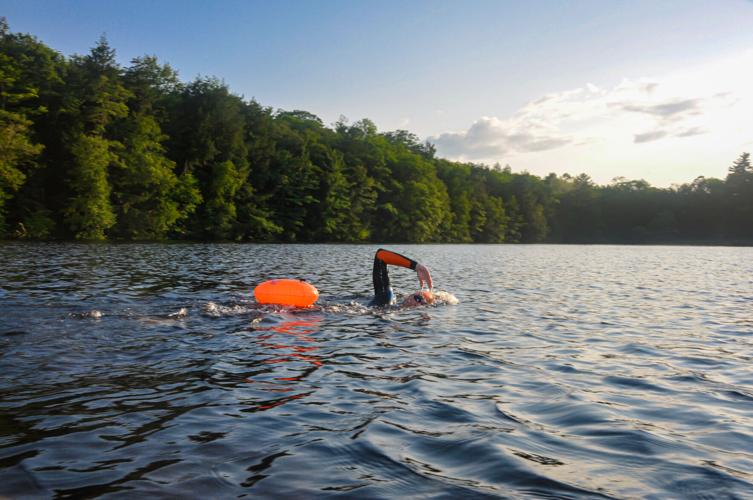 A member of the PaceMakers open-water swimming club enjoys an outing in Goose Pond in Lee last summer.

GREAT BARRINGTON — At the age of 4, Jill Fleming of Great Barrington nearly drowned in a New Jersey Lake. Instead of fearing the water, she plunged into swimming lessons.

Fleming, 60, is now one of the organizers behind an open-water swimming event Sunday at Great Barrington’s Lake Mansfield, which also took place last year with a resounding success.

This year’s event is a celebration of the an athletic passion that successfully dodged a prohibition by the state Department of Conservation and Recreation, which oversees many state lakes.

Last year, the DCR prohibited swimming outside of the designated areas, after reports of dozens of drownings.

Open-water swimming enthusiasts to Gov. Baker: You can't tell us where to swim

Public backlash followed and the ban eased in favor of restrictions. At Walden Pond, for example, no one can swim outside of roped areas when a lifeguard is present, between 10 a.m. to 6 p.m.

Open-water swimmers like Fleming believe restricting people’s access to water is the wrong way to address the issue.

”I don’t like the state’s approach because [they] just say no without giving people a chance to utilize these resources,” said Bill Meier, a Great Barrington resident and South County’s swimming “guru.”

Meier compares swimming in a roped-off area, rather than the open lake, to “the difference between walking down the sidewalk and hiking in the woods.”

He has spent 30 years teaching safety in the waters. In fact, he is also busy adding an adult and an open lake section to the American Swim Coaches Association manual.

With the proper education and ability, according to Meier, open swimming is safe and suitable for people of all ages. “If something does happen, there’s a ripple effect,” he said. “Your personal safety is everybody’s responsibility [and] everybody is affected by the way you approach your own personal safety.”

Sunday’s schedule is packed, with an 8:30 a.m. safety clinic, followed by a short swim for novices, who will be escorted by experienced “angel” swimmers, and a longer half-mile swim.

With the $25 registration comes an orange buoy that bobs along near swimmers, an essential tool for safety in open water. “If you get tired or you get a cramp, you can hold on to it. If you’re unconscious, people can pick you up and in normal circumstances boats are more likely to see you,” said Meier.

The registration proceeds will go towards the lake’s beautification project. Organizers are hoping to raise funds to replace aging lifeguard equipment and, eventually, extend the footpath leading to the lake.

"If you encourage people to use the resources they have, they will appreciate them."

Meier believes that open-lake swimming fosters long-term environmental stewardship. “If you encourage people to use the resources they have, they will appreciate them,” he said. “The more you become intimately involved with something, the more you’re going to take care of it.”

Advocates of open-water swimming see benefits that cannot be replicated in supervised swimming areas. “It’s a way to pause. You’re breathing, you’re not talking to anyone. You have that moment to yourself to hear your own breath. It’s soothing,” said Fleming.

Aina de Lapparent Alvarez can be reached at aalvarez@berkshireeagle.com and 917-369-0669.