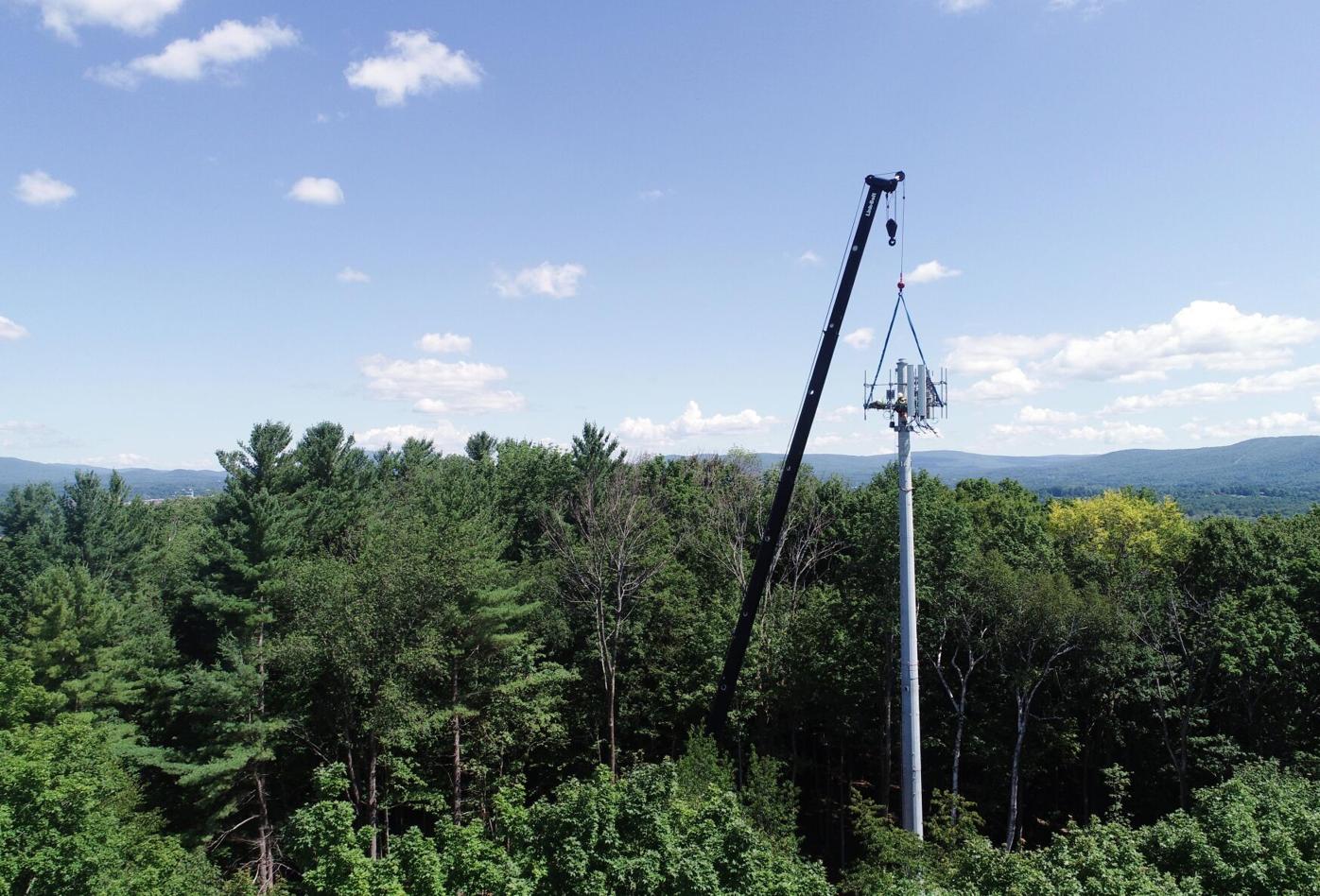 Workers put the finishing touches on a cell tower in July, near the top of Alma Street in Pittsfield. Since the tower went into operation in September, nearby residents have complained of health effects they link to the device. The city Board of Health has hired a New Jersey firm to see if the facility is operating within limits set on allowable electromagnetic radiation. 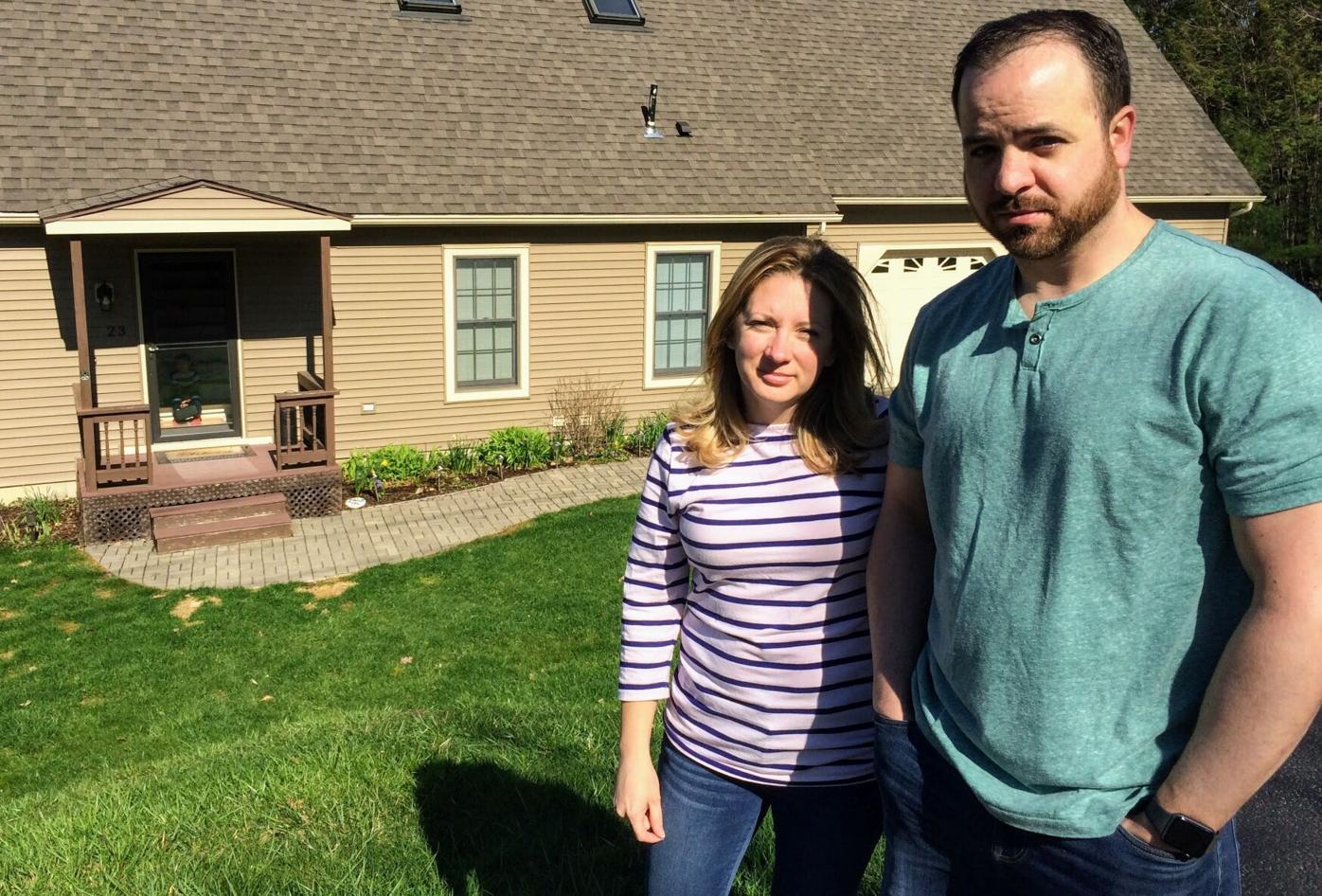 Diana and Paul Dalton stand outside their 23 Alma St. home in Pittsfield last spring. The family has decided to move away from the neighborhood, citing concerns about the health effects of a nearby cell tower that went up last summer. “We just cannot take the chance that this exposure will have permanent health effects on our young children, let alone ourselves,” the couple wrote to Gina Armstrong, the city’s health director.

PITTSFIELD — Though the agenda hasn’t been made clear, members of an elected board in Pittsfield want to talk to the company whose new cell tower is generating health complaints and distress in a city neighborhood.

At its July meeting, the Board of Health is expected to take up plans to request an audience with Verizon Wireless. Even before then, a New Jersey company will answer the city’s call to test levels of electromagnetic radiation from the tower, to determine whether it is exceeding limits set by the Federal Communications Commission.

“We want to circle back to how we’re going to go about opening up a dialogue with Verizon. I think that’s important. And try to make some headway there.”

The steps are cautiously welcomed by a leader of the neighborhood’s campaign to assess health impacts from the 115-foot monopole, which was erected last summer and began operating in September.

“It’s pretty amazing. We’ve seen some compassion,” said Courtney Gilardi of Alma Street, who has faulted the city’s Health Department and health board for not acting sooner on residents’ complaints about the perceived effects of what some call “electrosmog.”

Gilardi said she is pleased that members of the health board appeared to be in agreement, at their June 2 meeting, that steps need to be taken in light of reports of illness.

The newly formed Alliance for Microwave Radiation Accountability, of which Gilardi is co-chair, called April 13 for the city to conduct an independent survey of radiation levels from the new tower, which sits at the rear of a parcel at 877 South St.

The health board, though, has decided not to pursue a wider epidemiological study of possible health consequences related to the tower, citing its cost and complexity. One expert told the board June 2 that such a study, even if possible because of the small numbers involved, could cost $1 million.

The board previously had indicated that such a study could be run by the state Department of Public Health. But, the DPH declined to take on that project. 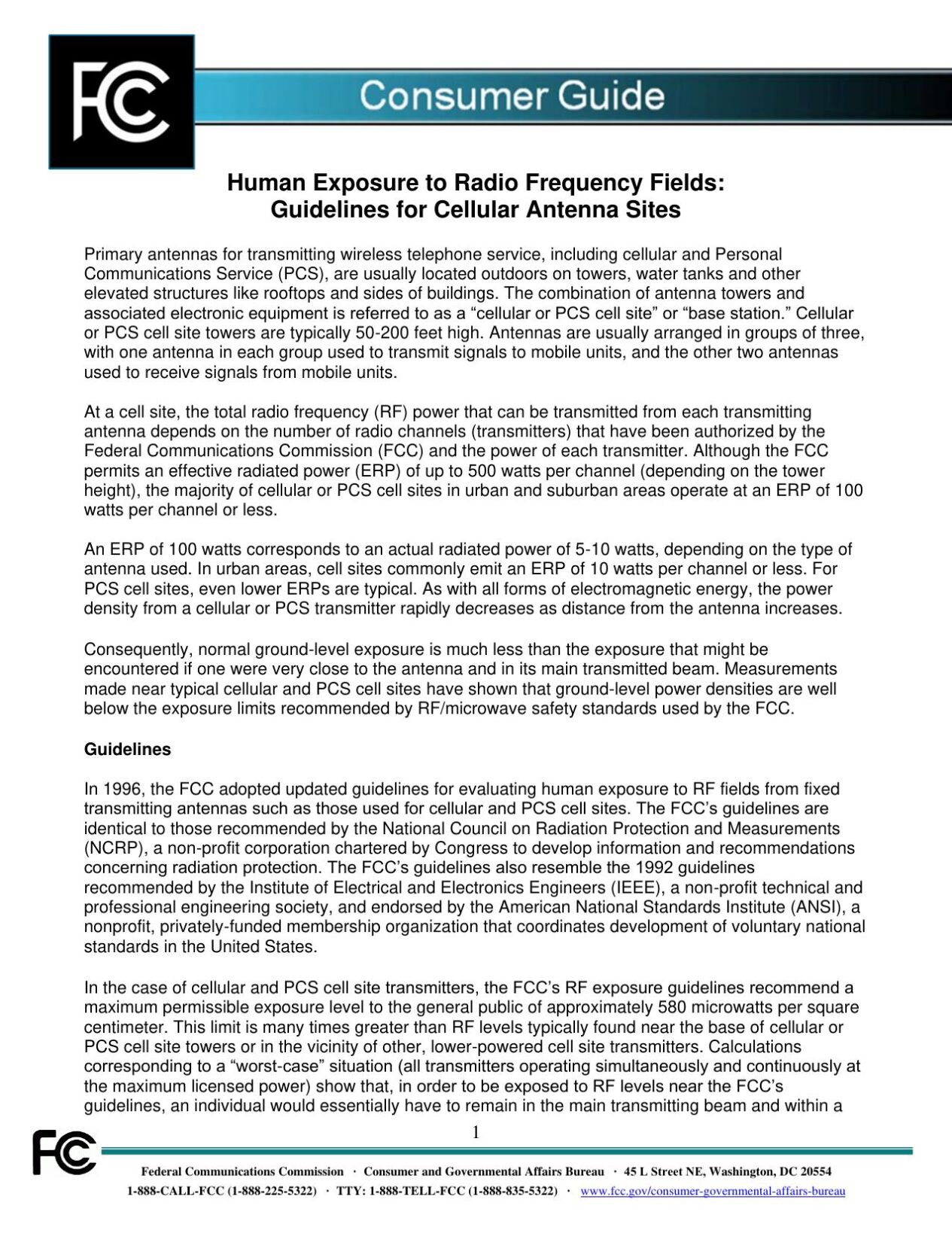 John M. Priest Jr., director the DPH’s Radiation Control Program, said in a May 13 email to Gina Armstrong, the city’s health director, that two residents had contacted his office about perceived health effects related to the tower. The alliance claims that at least a dozen people have reported being made sick by the tower.

The survey of radiation emanating from the tower and the board’s plan to seek a meeting with Verizon are seen as gains by neighbors, Gilardi said.

“We’ll have some support behind this and we’ll work together — as we have asked from the very beginning. These are hard conversations to have. I’ve always believed that solutions can be found, but we need the support of the city,” she said.

Armstrong told the board at its meeting last week she had hired a New Jersey company to conduct a study, to be completed soon, of electromagnetic radio emissions in the immediate area. Armstrong said the results would be presented at a future health board meeting.

Stephen Smith, the board’s vice chair, asked Armstrong to notify board members when the engineering company would be conducting the survey.

Armstrong could not be reached Thursday to provide updates on the status of the survey. A call to another staff member in her office seeking information was not returned. Meantime, the board is trying to settle on how to get Verizon involved in the issue and under what terms.

Smith brought up the topic after a more than three-hour session June 2, most of it devoted to hearing from experts on the issue of electromagnetic radiation and human health.

“We want to circle back to how we’re going to go about opening up a dialogue with Verizon,” Smith said. “I think that’s important. And try to make some headway there.”

Still unclear is who will attend on behalf of the city. Health board member Brad Gordon said he sees value in calling a meeting with Verizon. Still, he suggested that other city officials should join in the conversation. Gordon could not be reached Thursday to provide more information on the kind of meeting the health board is seeking with Verizon.

Though videos of past health board meetings can be viewed on Pittsfield Community Television, as of Thursday, the city had not posted any board meeting minutes for 2021.

Over the past months, residents have bombarded Armstrong’s office and the health board with pleas for assistance.

In a May 4 email, Paul and Diana Dalton of Alma Street, whose home is the closest on the street to the tower, wrote that they have suffered headaches and insomnia since the tower went into operation. At the time, the board was a month from allowing outside experts on electromagnetic fields to provide information at a meeting.

“It is unfathomable ... that 8 months later we still have not had a public health department engage with the experts who are volunteering their time to help educate all involved on the scientific evidence that shows the biological effects this type of EMF exposure can have on people,” the couple wrote.

The Daltons have decided to move.

“We just cannot take the chance that this exposure will have permanent health effects on our young children, let alone ourselves,” they wrote. “We can’t change the fact that there has been no help offered for the past year, but we can change that going forward. Please engage with the experts provided to inform your team of what can be done today and help our neighborhood.”

“People are moving out because they don’t feel comfortable living next to a tower,” she said. “We want what everybody wants — that they feel safe in their own homes.”

Though the health board devoted most of its June 2 meeting to the topic of electromagnetic radiation and health, the member who led the group for most of the past year signaled, in an April email to Armstrong, that he was not interested in immersing himself in the issue.

The email sent by Dr. Alan Kulberg was obtained by the alliance through a public records request.

“In my view it is neither the Board of Health [nor] the Pittsfield Health Department that can navigate these complex issues or provide satisfaction for those opposing the tower,” Kulberg wrote.

“I do not want to position the board as the adjudicator. I do see the board as facilitating a discussion with the goal of airing the controversy and educating the public about the potential health risks of the Verizon cell tower, although that may be a non-starter as the opponents are already convinced of the harm,” he wrote.

“This is a complicated issue that stands at the intersection of medicine, physics, and epidemiology. To be frank, I have no desire to review the literature that has been provided nor do I want to debate the issue with the anti-tower citizens,” Kulberg wrote. “It is just not a responsibility I want to take on.”

Given that stance, Kulberg offered to step down as board chair.