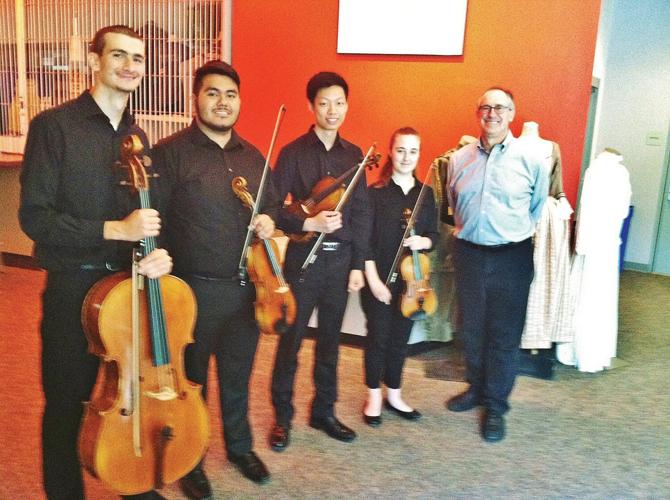 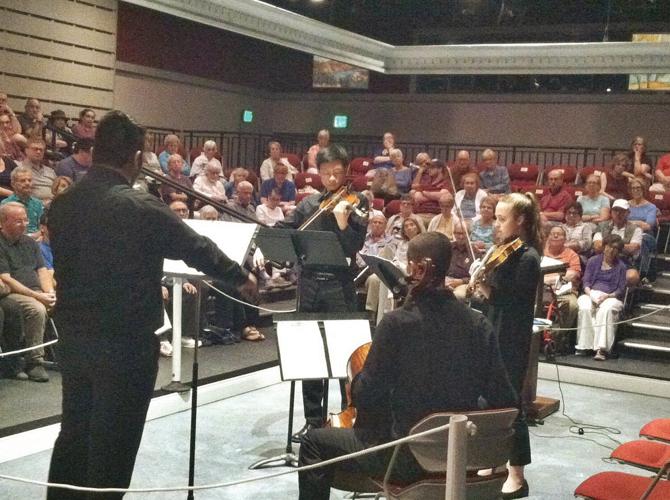 Members of the Pittsfield High School String Quartet perform "Playing for Our Lives," a composition by Gerald Cohen, inspired by the composers and musicians of the Holocaust. The performance took place Friday in the Elayne Bernstein Theater at Shakespeare & Company in Lenox as part of the JTS in the Berkshires lecture series.

Members of the Pittsfield High School String Quartet perform "Playing for Our Lives," a composition by Gerald Cohen, inspired by the composers and musicians of the Holocaust. The performance took place Friday in the Elayne Bernstein Theater at Shakespeare & Company in Lenox as part of the JTS in the Berkshires lecture series.

LENOX — Out of one of the darkest eras in human history, the Holocaust, rose some powerful musical performances and compositions that both captivate and haunt today's audiences.

On Friday, the Jewish Theological Seminary's JTS in the Berkshires lecture series presented its first talk with musical accompaniment. Composer Gerald Cohen, cantor and assistant professor at H.L. Miller Cantorial School, presented "Verdi in Terezin: A Composer's Inspiration," followed by a performance of his work, "Playing for Our Lives," featuring a Pittsfield High School string quartet. The event took place before a nearly full house in the Elayne Bernstein Theater at Shakespeare & Company.

"As a composer, I love telling stories and I love using Jewish text," Cohen said.

Cohen set the stage at the JTS talk by explaining the musical role taken on by those interned at Terezin concentration camp, also known as the Theresienstadt Ghetto, located 30 miles north of Prague in the Czech Republic. He described it as a "way station" for people, many of whom from there would be sent to be killed in camps like Auschwitz in Poland. A significant number of people, Cohen said, smuggled in sheet music and instruments with the handful of their belongings, and were actually allowed to keep them. In fact, captors were allowed to perform and listen to music, attend lectures, play chess and such. "And there were a great number of excellent artists of all sorts in the camp, among those many excellent performers and several excellent composers — and so musical life flourished with a passion in these very strange surroundings," Cohen wrote to the Pittsfield quartet in his rehearsal notes for them to perform "Playing for Our Lives."

Cohen was commissioned to compose the piece by members of the Cassatt String Quartet, which premiered the piece in February 2012 at Symphony Space in New York City.

"Technically this is a little bit harder than we're used to playing, but emotionally it was even a little more challenging," Lin said.

Empowerment among the horror

Cohen said the title of his composition was inspired by a quote from Paul Rabinowitsch, who, at the age of 14, was the trumpet player for "Brundibar" at Terezin, and among the few to survive:

"When the SS was present, I always had this shadowy feeling at the back of my head. I knew I could not play wrong, and you can hear every wrong note very clearly on a trumpet. Rahm [the commandant of Terezin] would notice, I thought to myself, and be mad at me, and put me on a transport. And in those moments it was as if I were playing for my life."

Terezin would become a sort of "model camp" that the Nazis liked to herald, a "trick to fool the world about the nature of concentration camps," Cohen said. On June 23, 1944, the concentration camp was beautified with gardens and fresh paint to host a soccer match, musical performance and reception for an inspection visit by representatives from the Danish Red Cross and International Red Cross. But once the delegation departed many of those performers, including the youths who performed the children's opera, "Brundibar," were transferred onward to meet their cruel and untimely fates. Brundibar — which tells the story of two children who take on a challenge by an evil organ grinder — was one of the productions that was staged more than 50 times in Terezin.

Another notable prisoner in Terezin was Prague Chamber Opera founder, composer and pianist, Rafael Schachter, who spurred the cultural life as sort of an act of defiance at the concentration camp. In September 1943, the Schutzstaffel ordered Schachter to conduct Giuseppe Verdi's "Requiem," which is actually a Catholic funeral mass written in Latin.

Cohen said Schachter had one vocal score for the mass and conducted and rehearsed the rest from memory. The conductor assembled a 150-member chorus. "They met in a small, dank basement studio at night," Cohen said.

But, he noted, the two hours of freedom and music instilled a sense of dignity and joy among the imprisoned.

The Requiem was performed more than a dozen times at Terezin, including at the 1944 Red Cross visit. Each time, the size of the choir dwindled. The last time was in October 1944, before Schachter himself was transported to other camps. He died on a death march during the evacuation of Auschwitz in 1945.

During Friday's performance of "Playing for Our Lives," a deep hush fell over the audience as the young quartet members performed a dynamic range of dissonant minor triads to lullaby melodies. After the first two movements, the students returned to their seats and Cohen played the "Dies Irae" recorded by the Cassatt String Quartet.

During the audience question and answer session that followed the performance, a second hush came over the audience as a man named Fred Terna stood up to speak. He is a survivor of Terezin, Auschwitz and Dachau concentration camps.

"I'm 95," he said jokingly as he took measured steps to the front of the room.

"I was very moved," he said of the performance. Looking at Cohen, then the PHS String Quartet, then the audience, he said, "I wanted to thank you all for being here."

Sharing the music, the stories, the art, Terna said, "It keeps the memory going. ... You the audience are part of that continuation."