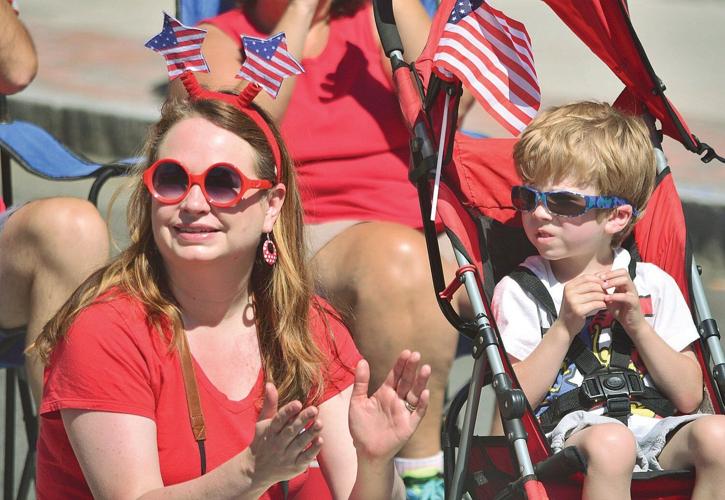 Katie Malone-Smith and her son, Charlie, 4, watch the 2017 Fourth of July Parade on North Street in Pittsfield. Organizers hope that the parade this year can take place, but the decision hasn’t been made. 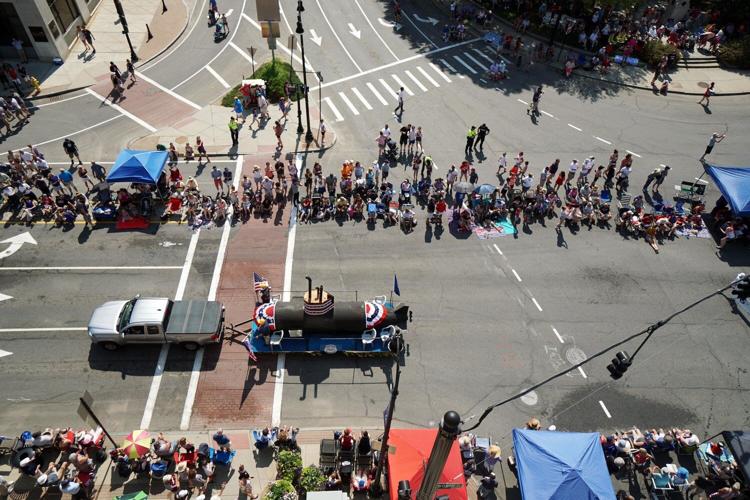 A submarine float representing the U.S. Submarine Veterans passes Park Square during Pittsfield’s Fourth of July Parade in 2019. May 1 is the Pittsfield Fourth of July Parade Committee’s deadline to decide whether to proceed with this year’s parade, which organizers canceled last year because of the coronavirus pandemic. Before that, it previously was canceled in 1977.

PITTSFIELD — An optimistic Pittsfield Fourth of July Parade Committee is planning for thousands of people to cheer on the downtown celebration this year.

That is, if the coronavirus pandemic is under control, locally, within three months.

The all-volunteer group is ramping up efforts to secure marching units and get a head start on raising money for the 2022 edition of the Independence Day event.

“The 2021 parade is already paid for. We estimate the cost will be $80,000,” parade committee President Peter Marchetti told The Eagle on Monday.

He says enough money left over from the 2019 parade and money raised for, but not used, in 2020 will pay for this year’s parade.

As for the 2022 fundraising goal, Marchetti says it has been set at the standard $85,000 mark, but solicitation will begin later than usual. For example, fundraising letters will go out April 1, instead of March 1.

For first time in more than 40 years, no Pittsfield Fourth of July Parade (copy)

A submarine float representing the U.S. Submarine Veterans passes Park Square during Pittsfield’s Fourth of July Parade in 2019. May 1 is the …

May 1 is the group’s deadline to decide whether to proceed with the parade, which organizers canceled last year because of the pandemic, six weeks before July 4. Before that, it previously was canceled in 1977.

The date for the parade this year is July 5, to avoid conflicting with church services July 4, which falls on a Sunday.

The likelihood of a parade depends on an accelerated vaccination program and consistently low COVID-19 infection rates.

That would pave the way for what organizers believe to be the Berkshires’ largest one-day, in-person event.

Marchetti says his group is looking at a glass-half-full scenario. “We have an energetic and upbeat committee, despite the many unknowns about the virus at this juncture for 2021. It’s better to be ready than to be caught flat-footed,” he said.

A late start to fundraising might not hinder the parade financially. The $5,500 collected last year, before the parade was canceled, remains available, as does money from 2019.

A decade’s worth of financial problems had the parade teetering on the edge of cancellation two years ago, but last-minute donations flowed in to keep it alive.

The committee’s plea for increased contributions in 2019 led to more than $110,000 in donations, one-time funding and proceeds from the organizer’s annual Oldies but Goodies show in November 2018.

In recent years, the parade has averaged about 170 units and lasted two hours.

The parade is the most-watched program produced by, and shown live on, Pittsfield Community Television, PCTV Executive Director Shawn Serre has said.

The parade committee meets monthly. Its next gathering is scheduled for Feb. 24. For information on volunteering, visit pittsfieldparade.com.