David Lester Ross, 33, was arraigned Thursday in D.C. Superior Court on charges of unlawful entry and violating the District of Columbia’s 6 p.m. curfew, which had been set in place Wednesday by the city’s mayor in light of expected disturbances as lawmakers prepared to validate the outcome of the November presidential election. 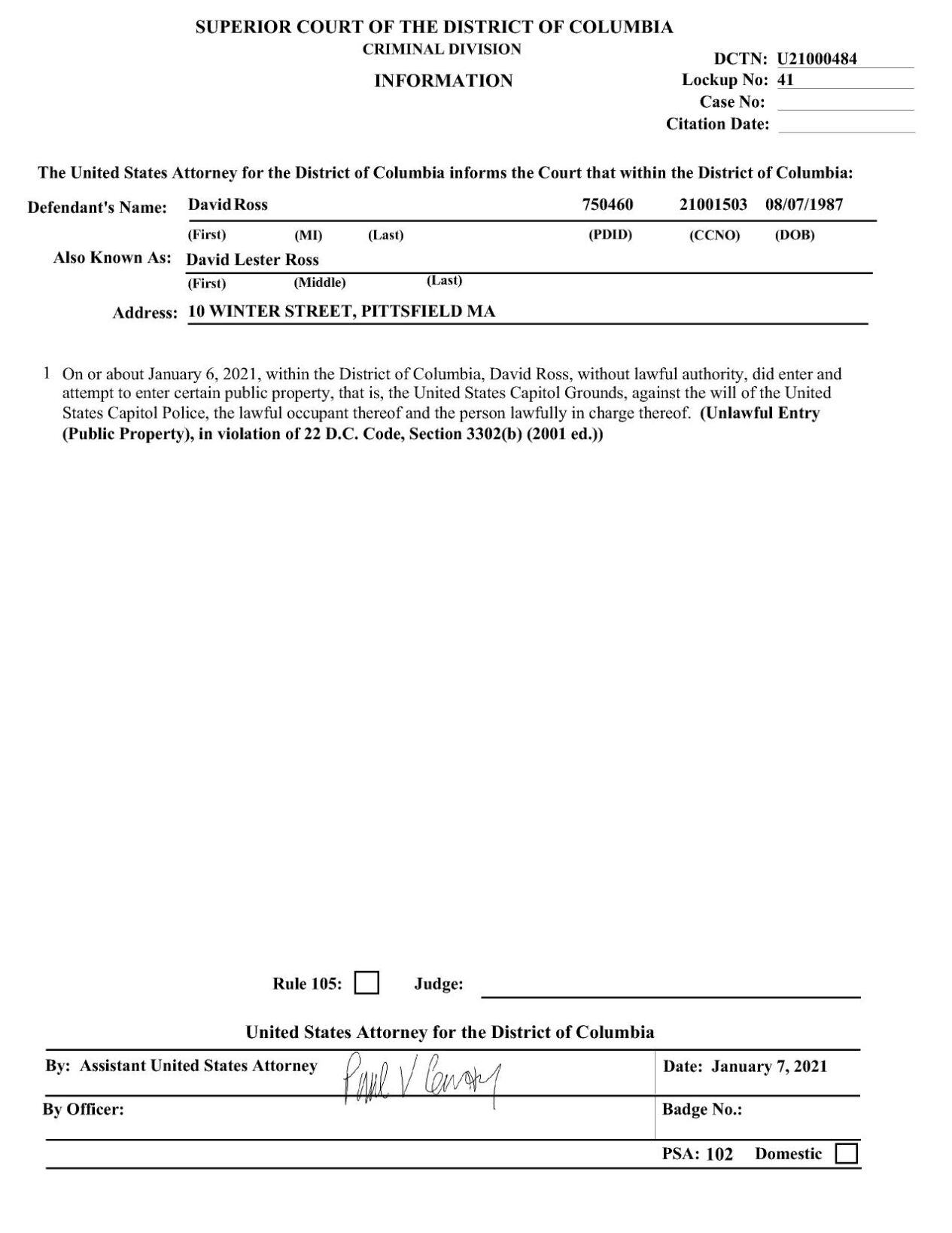 Ross was among thousands who entered the Capitol area on Wednesday, some of whom engaged in vandalism and violence. Before the Capitol was cleared and secured, one person was shot and killed and three others died as a result of medical emergencies.

A Capitol Police officer who was injured in the fray also died on Friday.

The mass disturbance delayed for several hours proceedings to affirm the election results.

In a 1 p.m. appearance in Courtroom C-10 before Judge Juliet McKenna, Ross entered a not guilty plea and was ordered to stay away from Washington. He was released on personal recognizance.

The charges are misdemeanors, according to court papers reviewed by The Eagle. His DC-based defense lawyer, Darryl L. Daniels II, did not return a request for comment Friday afternoon.

On his Facebook page, which displays a Trump-Pence campaign sign and a profile picture of what appears to be him holding a long gun, Ross identifies himself as a former member of a U.S. Army infantry unit as well as a National Guard unit. His biography says he lives in Pittsfield and is from Catskill, N.Y.

“He was in the reserves,” said Woody Vickery, a former neighbor. “He always had to leave, come back then leave again.”

Ross was listed in court documents as living at 10 Winter St. in Pittsfield, a house that has since been torn down. The neighbor said he’d known Ross for several years, and last year helped him move to another apartment in the city.

No one answered the door at his current address.

Ross posted often to Facebook, and his recent updates include a meme that engages in the conspiracy theory that Bill Gates is behind a DNA-altering COVID-19 vaccine, a call to defund the media and posts that falsely claim President-elect Joe Biden stole the election.

Ross is accused both of violating the district’s curfew and of entering unauthorized areas of the Capitol, though what role he played in the riot was unclear on Friday. Court papers filed in his case allege that he “without lawful authority, did enter and attempt to enter certain public property, that is, the United States Capitol Grounds, against the will of the United States Capitol Police, the lawful occupant thereof and the person lawfully in charge thereof.”

In the curfew violation, Ross was allegedly one of 10 people arrested on the 100 block of First Street, Northwest, after he and others were given three warnings, starting at 7:15 p.m., to disperse, according to court papers. The group was processed at the Metropolitan Police Academy.

“Anyone who traveled from Massachusetts to DC with intent to commit such crimes will be prosecuted in the District of Massachusetts,” he said in a statement.

The extent of Ross’ legal troubles in Massachusetts was unclear Friday, when a U.S. Attorney’s Office spokesperson declined to comment beyond the previously issued statement.